MORNING SNOWSHOE ALONG THE EAST BRANCH: 2/26/12

Snowshoeing has been in short supply this winter, so before opening the store on Sunday I decided to take advantage of the fresh 5-6" of snow that fell Friday night and do a little 'shoeing at Lincoln Woods. I went up the less-used Pemi East Side Trail, which after a half-mile offered this view of the snow-covered East Branch of the Pemigewasset. This vista was expanded by Tropical Storm Irene. 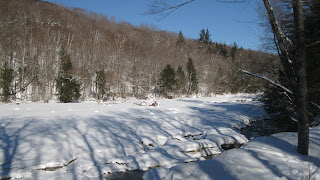 I turned off onto the Pine Island Trail, parts of which were completely obliterated by Irene. The trail has been officially closed by the Forest Service since then, but still sees some use. It is intact for the first 0.25 mi. from its south end. My wife and I had adopted this trail in July, a month before Irene ravaged it. The Forest Service plans to relocate and reopen the trail this year, hopefully; it will be moved back into the woods farther from the river. 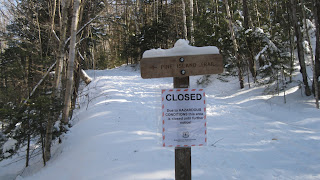 After crossing Pine Island Brook on a snow bridge, and a smaller open brook on snow-covered rocks, I followed a nice new snowshoe track through the pleasant open woods typical of the Pine Island Trail. 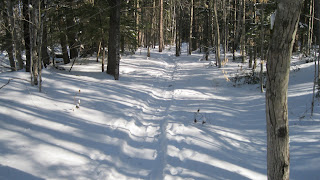 Here is where the trail comes to the first section that disappeared into the river; note the blaze on the tree on the right. 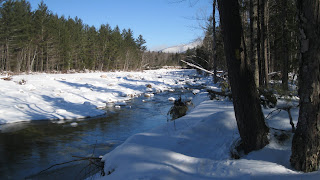 From this spot, there's a view eight miles up the valley to Southwest Twin (on the R); Galehead Mountain can be seen on the L. 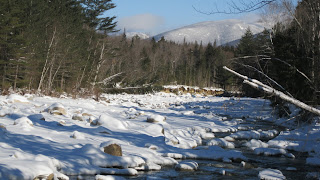 By moving a few yards to the south, you can also see South Twin, still socked in at the top by a morning wisp of cloud. 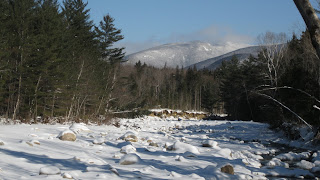 On the way back, I had this view of Black Mountain (near Loon Mountain) from the Pemi East Side Trail. What a beautiful morning! 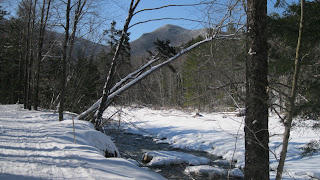