On a warm sunny morning Carol and I returned to one of our favorite areas, the network of "pleasure paths" threading the lower slopes of Nowell Ridge on Mt. Adams. In particular, we enjoy the meandering trail known as the Cliffway, which leads past the minor but pleasing viewpoints at White Cliff and Bog Ledge.


We parked at Appalachia and walked the easy first section of The Link to the crossing of Cold Brook at Memorial Bridge. 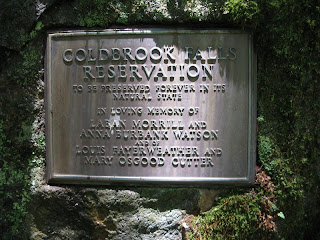 We turned left on the Amphibrach, one of the mellowest routes to be found on the Northern Presidentials, with generally very good footing. 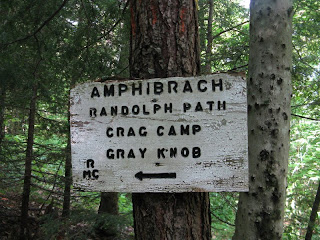 A short distance up we took a side path for a closeup view of beautiful Cold Brook Fall. (Cold Brook is a drinking water supply, no swimming please.) 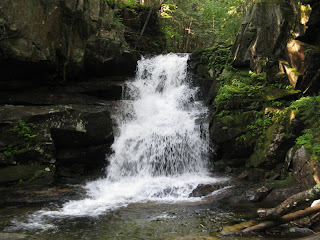 The woods are beautiful as the Amphibrach climbs moderately up the valley parallel to Cold Brook. 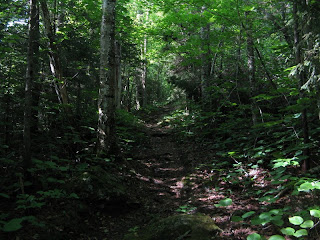 At 1.8 miles from Appalachia, the Monaway goes R and to the L is a spur path to the "Coldspur Ledges," a scenic spot just above the point where Cold Brook and Spur Brook converge. 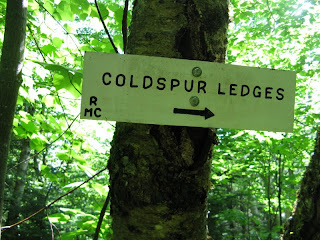 It's kind of a hard spot to get at; a steep drop at the end of the side path gains you a look at the ledges downstream. 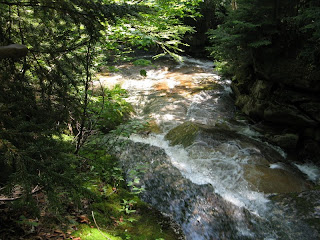 Then we headed up the Monaway, named for Monahan's logging camp, which was located near this junction a century ago. 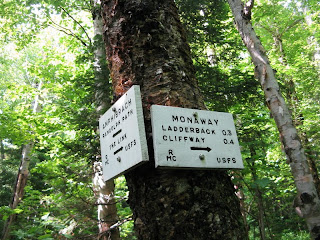 The bottom section of this short trail was muddy, then it climbed through a gorgeous lush hardwood glade. 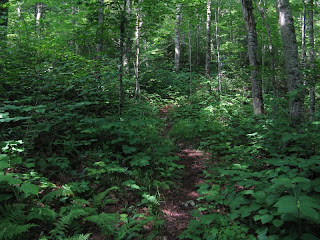 Next up was the Ladderback Trail, named for a split boulder dubbed Ladderback Rock. 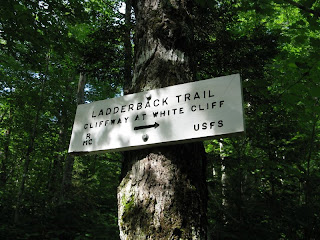 This neat, narrow little trail contours along the slope, becoming a little rougher towards its west end. 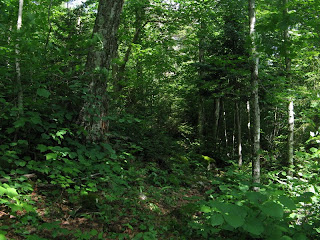 At White Cliff, it meets Along the Brink, perhaps the shortest named path in the White Mountains. 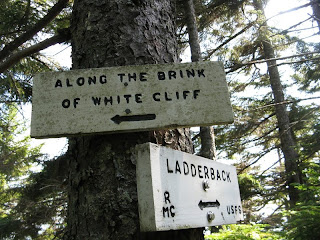 True to its name, Along the Brink hugs the mossy edge of the cliff. Caution is needed, especially if it's wet. Not recommended for hikers who don't like heights. The Ladderback Trail provides a less airy parallel route back up in the woods. 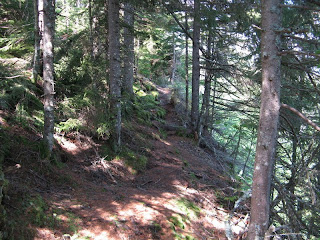 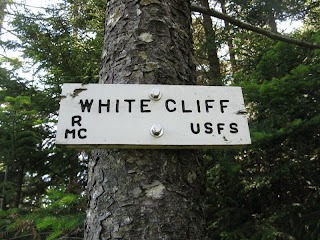 To get the full view, you have to go a few steps down Along the Brink to the open edge. Across the valley is the Crescent Range: (L to R) Mt. Randolph, Mt. Crescent and Black Crescent Mtn. Lookout Ledge can be seen on the flank of Mt. Randolph. 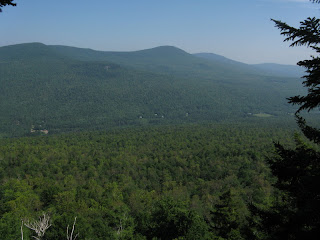 To the NW is the Pliny Range: (L to R) Mt. Starr King, Mt. Waumbek, and South, Middle and North Weeks. 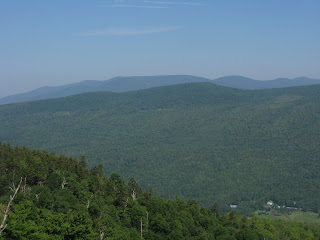 We turned left here on the Cliffway. 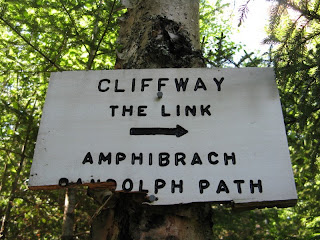 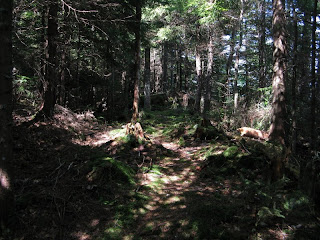 It emerges in a sunny opening known as Bog Ledge (2650 ft.), one of my favorite little spots on the Northern Peaks. This route is so lightly used that the trailbed is soft moss; you almost feel guilty walking on it. 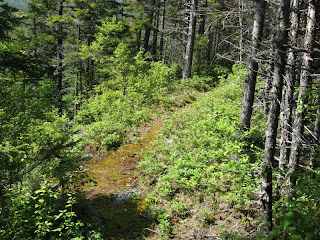 There's a sweet view of King Ravine and the Knife Edge on Durand Ridge from this spot, with the summit of Mt. Adams seen up to the right. 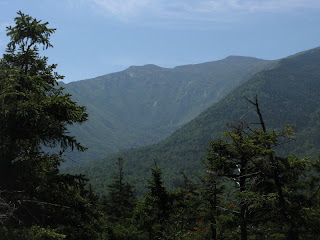 Mt. Madison can be seen rising over the lower part of Durand Ridge. The Cliffway, Monaway and Ladderback Trail were cut in 1933-34 by the great Presidential mapmaker, Louis F. Cutter. In the June 1934 issue of Appalachia, Cutter described his handiwork, including this paean to Bog Ledge: "Here in the warm sunshine, sheltered by evergreen thickets from the northwest winds, is a splendid place for lunch." Actually, there's not much place to sit these days, unless you fashion a seat from your pack, but it is a wonderful spot. 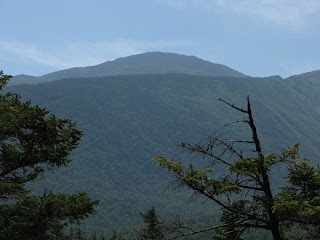 From Bog Ledge, the Cliffway descends steeply a short way, then crosses an emerald bog with squishy footing. Some corduroy or bog bridges may be needed here someday. 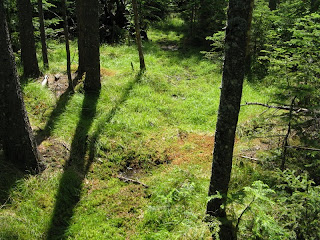 We soon came to King Cliff, where the vista of King Ravine is mostly overgrown. 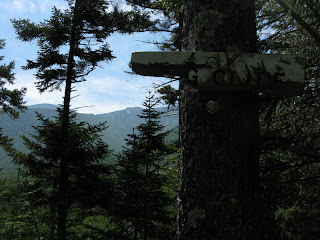 The Cliffway continues down a sylvan corridor to meet the upper end of the Monaway. 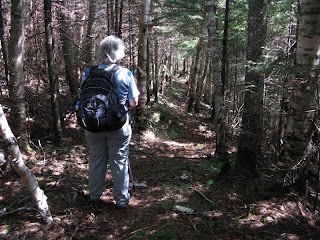 Cool and shady on the Monaway - a forest in which to immerse yourself. 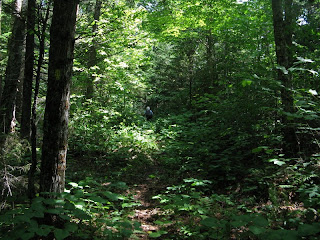 Some good-sized trees, including this sugar maple, have flourished here since the heavy logging in the first decade of the 20th century. The Randolph Mountain Club is celebrating its 100th anniversary this year - see www.randolphmountainclub.org for a list of happenings. The RMC was founded to restore the early trails on the Northern Peaks that had been largely obliterated by logging from about 1903 to 1907. 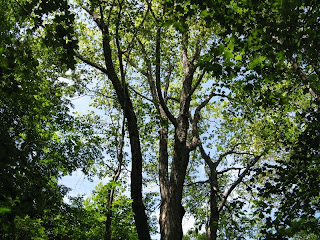 On the way out I did a 1.6 mile section of redlining on the Presidential Range Rail Trail, heading west towards Lowe's Path. 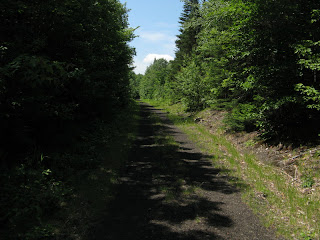 I came down the short lower section of Lowe's Path and met my carspotting wife at Lowe's Store - thank you!

Minus the Rail Trail diversion, this version of the Cliffway loop from Appalachia is 5.1 miles long with 1350 ft. of elevation gain. 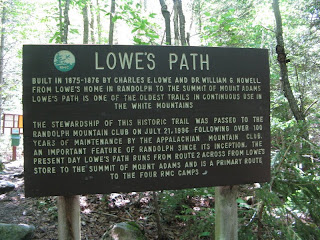