The one advantage of a dreary rainstorm and thaw such as swept through the mountains on 1/25 is that once it gets cold again, the snow in the woods firms up and provides good snowshoe bushwhacking. Prior to the rain, the snow off-trail was deep and unconsolidated, making travel slow and arduous.

With colder temperatures this morning, I aimed to sample the off-trail snowshoeing to one of my favorite winter spots: little Mud Pond (a name shared with dozens of other small, mucky water bodies in the Northeast) at the base of the great SE spur of South Kinsman. This would be the continuation of a mini-tour of Kinsman Range water bodies in the past week (along with Kinsman Pond and Lonesome Lake). On the way out I would make the short side trip to the summit of Mt. Pemigewasset.

My access route was the popular Mount Pemigewasset Trail, starting from the Flume Visitor Center. The trail was a soildly-packed highway with a few open wet leafy/rocky spots. Microspikes were perfect for the job. 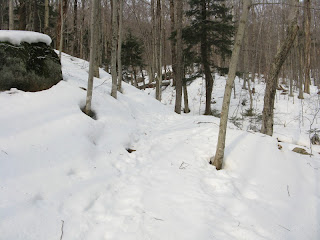 Most of this trail climbs through a fine hardwood forest, featuring some towering old yellow birches. 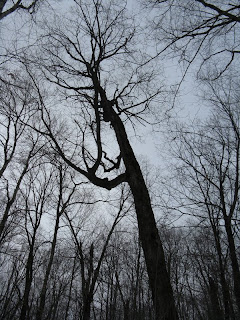 This trailside boulder is a landmark at about 2200 feet. In this section were some pink ribbons marking future trailwork. Last year the Trailwrights, under the direction of stalwart trail worker Hal Graham, did some major drainage work on this perenially wet stretch. 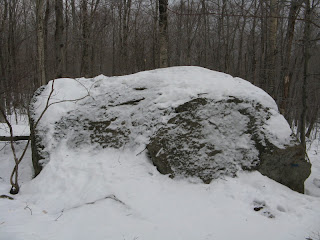 Near the height-of-land I put on my snowshoes and headed north along the ridge through mostly open woods. As I hoped, the off-trail 'shoeing was excellent, sinking only a few inches into the firm snowpack. The woods continued open much of the way, though I tried a slightly different, more westerly approach than on previous visits and ended up for a while in a flat drainage with blowdown and dense young conifers.

Mud Pond rests in a large spruce-wooded flat area and can be difficult to find. Someone once told me that years ago, as a navigation exercise, students at the AMC/ADK Winter Mountaineering School were told to "find Mud Pond." Despite 4 or 5 previous visits, today I still had a few moments of doubt before spotting the large white opening ahead. 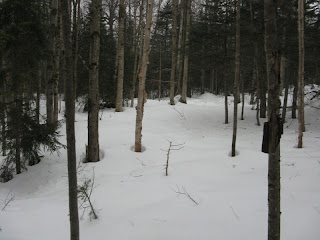 By the time I arrived at the pond, it was snowing steadily; this had moved in earlier than predicted. 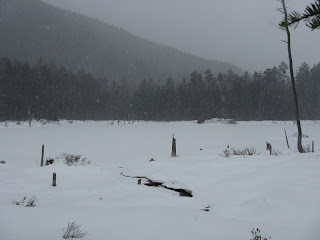 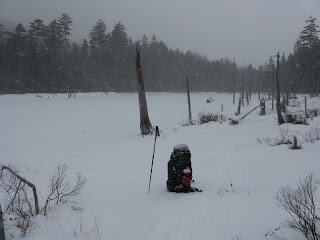 It was a far cry from my last visit to Mud Pond, when Garth Dickerman and I enjoyed a glorious February day here, with the view of the Franconia Range fully revealed. 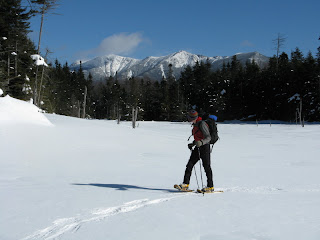 I knew there was no chance of seeing the Franconias on this cloudy day, but I at least wanted to have a clear view of the wild spur of South Kinsman that hulks above the west shore. So I lingered for a while, poking along the boggy shore in either direction on deep, very firm snowpack. (Because of its bogginess, Mud Pond is much less accessible in summer.) This view is from near the north end of the pond. 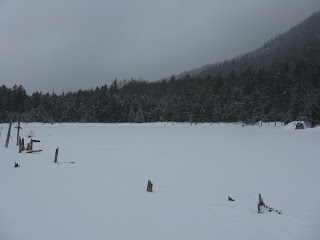 After a long wait (made possible by temperatures in the high 20s and no wind), the snow finally let up and the sun broke out briefly. 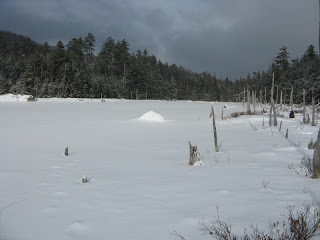 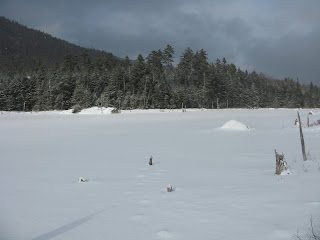 Now the Kinsman spur, spotted with rugged ledges, was clearly seen. It creates a wild and secluded setting for the pond. 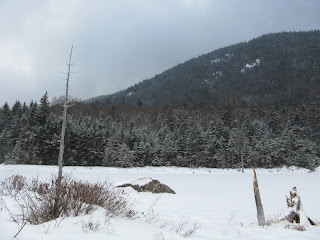 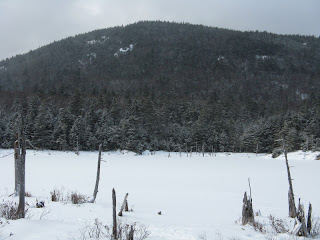 On the 2008 trip Garth and I made a steep bushwhack to one of the ledges on the Kinsman spur. We were rewarded with a unique bird's eye view of Mud Pond. 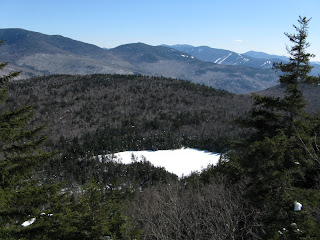 The ledge also had a good view of Mt. Flume and the bowl of Flume Brook. 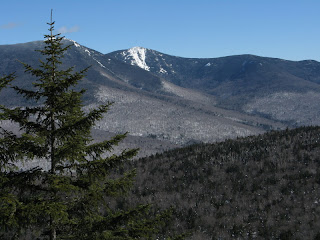 With clouds obscuring the higher peaks, it wasn't worth attempting the strenuous bushwhack up to the ledges today. Before heading back, I took a farewell shot of the pond from the south end. 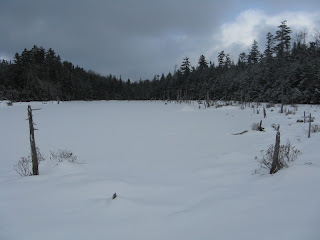 During my sojourn at the pond the woods had been dusted with an inch of new snow. There were many moose postholes in this area. 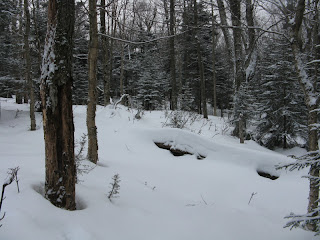 Returning to the Mount Pemigewasset Trail, I made the short climb to the summit, pausing to chat with a descending snowshoer, the only other person on the trail this day. He had once been to Mud Pond and remarked about its seclusion. As I approached the prow-like summit ledge, it was evident that fog had rolled in, mostly obscuring the views. There was a glimpse of Bog Eddy, the large open swamp on the high plateau south of Mt. Pemigewasset. 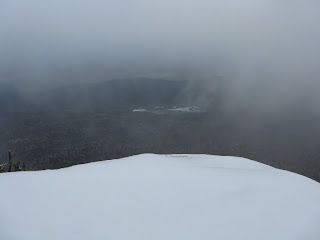 I-93 could be seen winding southward into the clouds. 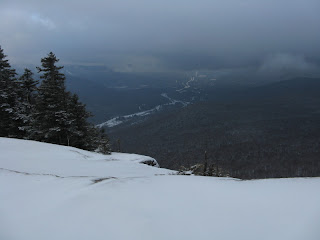 I always enjoy the down-look to the hardwood forest at the base of the mountain. Somewhere below Mt. Pemi, I've heard, there is a small stand of old-growth hardwood. 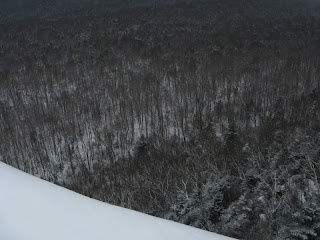 On the way down the trail, I made several long forays in the untracked snow through the hardwoods parallel to the trail. Where there is adequate cover, conditions are great in the woods right now! 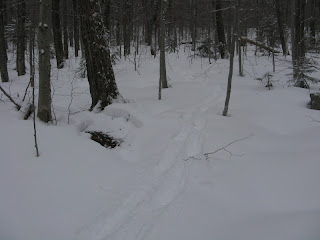