Continuing with the Hancock theme from last week's hike, today I took a solo snowshoe hike to Hancock Notch, one of the least-traveled of the backcountry notches in the Whites. The photo below, taken from an off-trail ledge on Owl's Cliff, shows Hancock Notch as seen from the east. It is formed by Mt. Huntington on the L and the bold southern spur of South Hancock, dubbed "Juno Peak" by Hancock afficiniado Guy Waterman, on the R. Mt. Hitchcock is seen through the notch. This pass is unusual for its very wide, flat floor - perhaps a mile across. 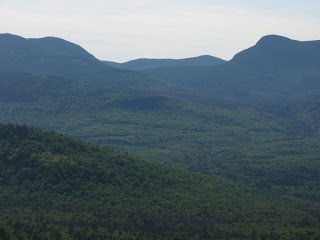 The first 1.8 mile section of the Hancock Notch Trail was a smooth snowy highway packed by Hancock peakbaggers, with a quarter-inch of new snow on top. I barebooted for 0.6 mile to the first stream crossing, then put snowshoes on for the rest of the day. 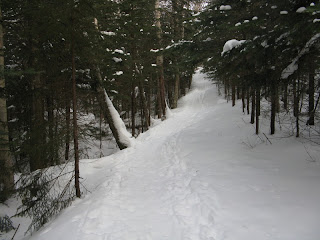 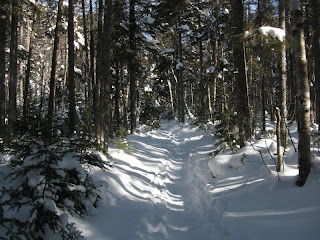 At the Cedar Brook Trail junction, I continued straight on the Hancock Notch Trail, breaking trail through about a foot of fine powder atop an old snowshoe track. 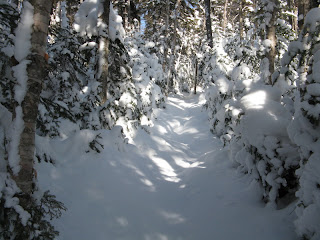 The middle part of this section follows a relocation made about ten years ago, upslope to the north. Where it comes back to the old route near the brook draining the notch, the older trail looks more obvious than the newer route. 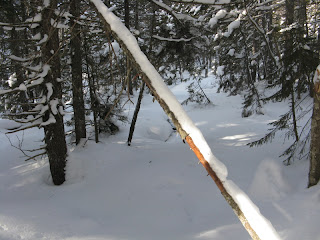 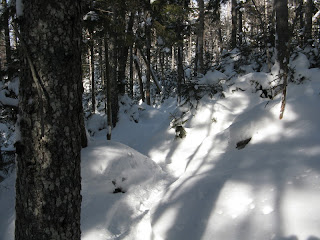 A beautiful snowy corridor led up to the flat floor of the notch. 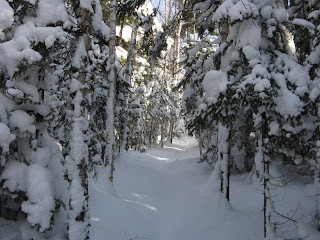 Much of the trail was bordered by dense snow-packed young conifers, but nearing the height-of-land there were some fine open spruce groves. 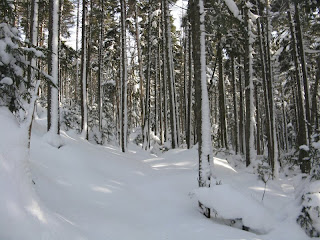 At the west end of the notch, a small open bog a short distance south of the trail provided an interesting view up to the talus slopes and ledges on the steep N face of Mt. Huntington. 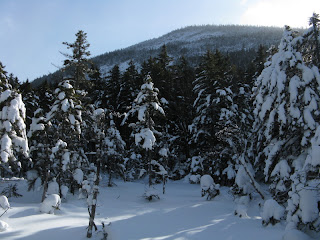 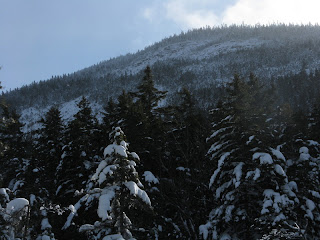 From the bog I wandered through open woods along the south edge of the flat floor of the notch. Back in the comfort of home I had considered the idea of whacking up to the talus, which I had done a couple of times in summer, to see its unique view of the Hancocks. But the wall of small snow-covered conifers seen up the slope, and memories of thick scrub and deep boulder holes (now hidden by two feet of unconsolidated snow) approaching the talus, quickly dissuaded me of the notion. 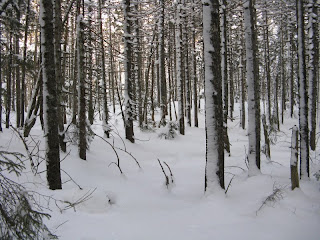 I returned to the trail near the east end of the notch, where an open spot right on the trail gave a different angle on the talus and cliffs. 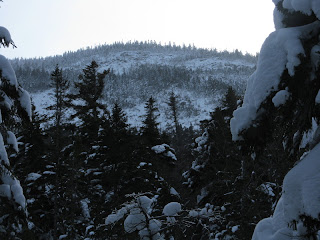 This was my turn-around point. To the E the Hancock Notch Trail is badly overgrown and difficult to follow. In December a snowshoer attempting an east-to-west traverse of the trail lost the route and spent an unplanned night out, triggering a Fish & Game rescue mission.

I headed back W across the broad floor along a lovely stretch of trail. Though it's less than three miles from the road, Hancock Notch gives you a real "out there" feeling. 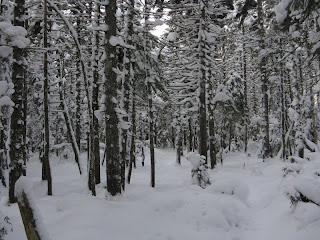 On the way back, the partly sunny skies prompted me to make a side trip up the Cedar Brook Trail for a return visit to the large open bog John Compton and I visited last week. I hoped the views of the Hancocks would be clearer today. Along the way was this pretty spot on the North Fork of Hancock Branch. 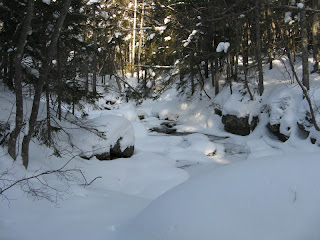 Heading out into the bog, I saw that our tracks from last week had been almost completely obscured by windblown snow. The temperature this afternoon had dropped from about 20 degrees at the start to 10 degrees at the bog. 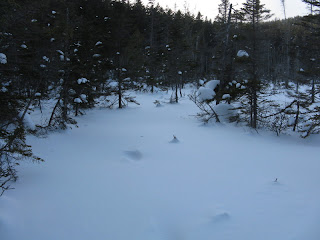 The views did not disappoint. The Hancocks spread wide above the bog. 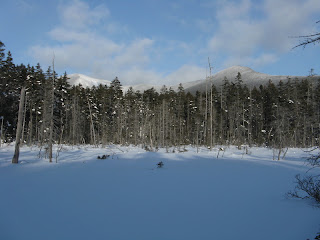 A zoom on the wild-looking Juno Peak. When I did a Google on this name, it came up with an interesting trip report by veteran bushwhacker Roy Schwieker, who has explored most every nook and cranny of the Whites and farther afield. Roy and his friend "The Peakmaster" made the thick, steep, difficult ascent of Juno Peak in 2005, starting from the Hancock Notch Trail; the report appeared on Views from the Top. 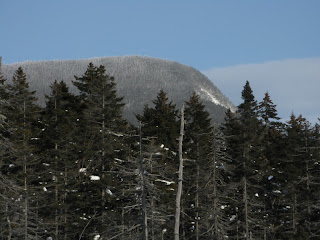 South Hancock, an impressive peak from this angle. 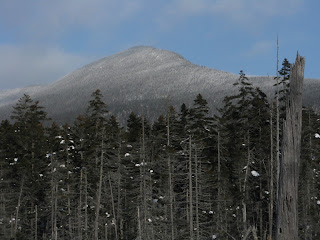 And North Hancock, with its whitened Arrow Slide. 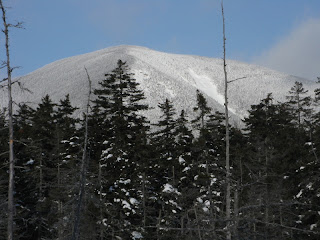 As I headed back out on the trails, there were no other hiker tracks anywhere along the route. I had the entire Hancock area to myself on this brisk January day.
Posted by Steve Smith at Wednesday, January 13, 2010