My, how this winter game can change in a hurry! After several weeks of snow-blanketed glory in the mountains, the heavy rain and balmy temperatures on 1/25 came as quite a shock. The next morning showed signs of clearing with breaks of sun, so I headed out to see how the trails and the snow had fared after the deluge. I figured the notches would be the best bets, as they had received the biggest dumping from the early January snowstorm. The plan was to head up to Lonesome Lake, and if conditions looked good continue up the steep climb to the Northeast Cannonball and enjoy some views, cloud cover permitting.

I got a late morning start on the Lonesome Lake Trail. 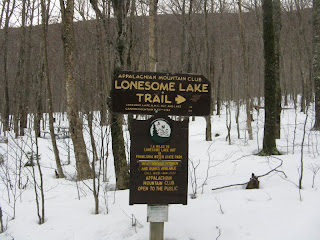 Where the trail leaves the campground, the storm runoff had cut a channel through the snowpack. 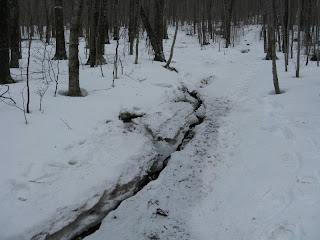 The woods just above the campground are home to some large old yellow birches. 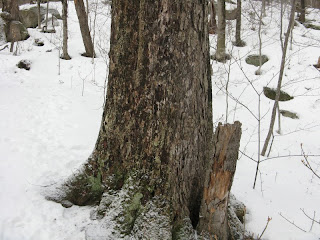 The well-packed snowshoe track survived the rain and was smooth as a sidewalk, with just a few small icy spots. The snow was crunchy with good bite - perfect for the MSRs. Although the heavily used section up to the lake would have been OK for barebooting, beyond that the track was a little softer and snowshoes were definitely needed as the temperature was in the mid-30s. I wore mine car to car. 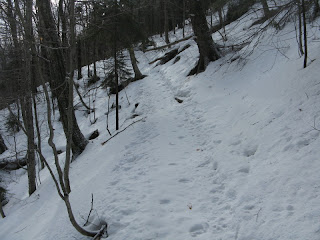 Up above the second switchback, it looked more like early April than late January. Near here I heard the squawk of a robin; some of them do winter over in the mountains, presumably dining on mountain ash berries and other local fare. 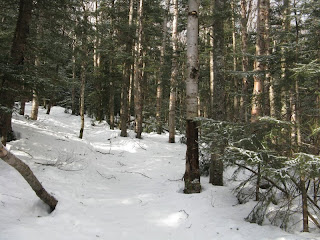 After the steady 1.2 mile, 1000-foot climb to Lonesome Lake, I had earned this favorite view of the Kinsmans across the pond. Although I have crossed Lonesome Lake many times in winter, this was not one of them, not on the day after 2 inches of rain and temperatures near 50! 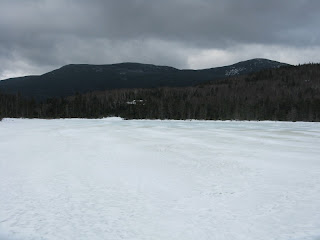 South Kinsman, with the roof of Lonesome Lake Hut visible below in the woods. 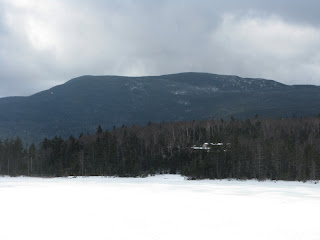 The ledgy face of North Kinsman. Hard to believe these dark-looking peaks are the same as the marvelously snow-crusted summits we saw last week from Kinsman Pond. 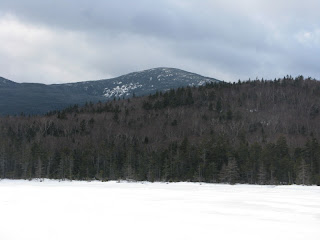 To the right I could see my next objective, the Northeast Cannonball. 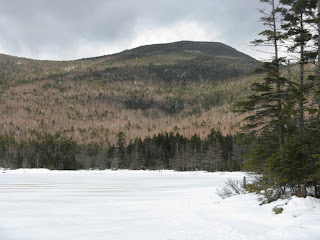 After skirting the east shore of the pond, the Lonesome Lake Trail crossed a flat area leading to the base of the climb to Coppermine Col. Along the way was a somewhat precarious crossing of a crevassed brook on a narrow, icy log bridge. All the brooks were opened up by the warm rain. 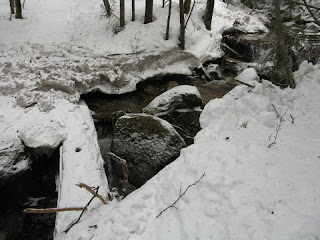 The trail led through some nice open "salt and pepper" woods - a mix of birch and spruce/fir. 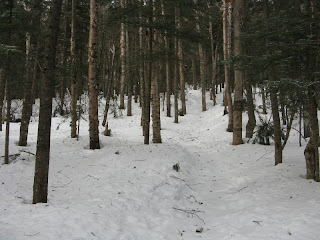 The upper Lonesome Lake Trail climbs quite steeply for several hundred feet. In one section the runoff had created a gullied mess of hollow ice, dirt and crusty snow. 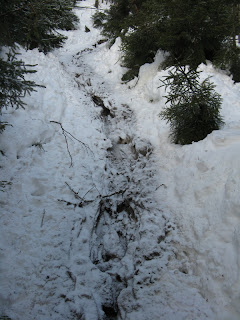 Above the steep section the trail approached Coppermine Col through open woods. The snow was littered with crusty chunks of snow that the rain had swept off the "Snow Gnome" trees. The only snow now on the branches was a slight dusting that had fallen overnight. 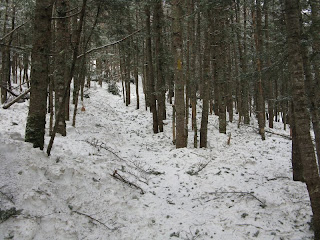 The Kinsman Ridge Trail junction. From here to the top of Northeast Cannonball is a climb of 350 feet in 0.2 mile - i.e. steep! 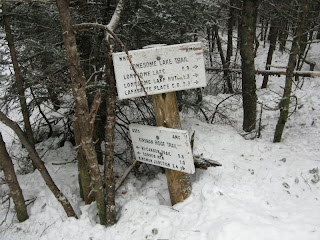 Not too far up there's a first view looking back at the rugged W face of Cannon Mountain. 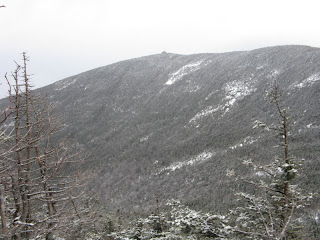 The trickiest spot on this climb is a ledgy "slot" where there's not much to hang onto. It's steeper than it looks in the picture. The MSRs provided good grip here on the crusty snow. 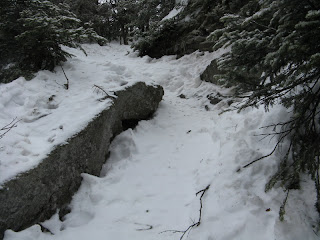 My favorite view from the Northeast Cannonball is from an open spot/blowdown area a short distance SW and downhill from the flat summit crest. From here the Kinsmans are seen rising beyond the nearby top of the Middle Cannonball. 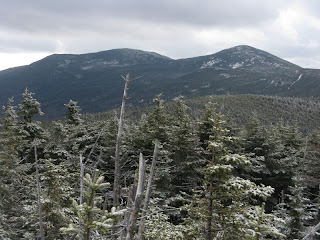 A zoom on North Kinsman. The little ridge that holds in Kinsman Pond can be seen at the base of the summit cone. 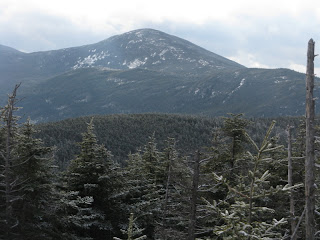 South Kinsman and its great, sprawling SE spurs trailing off to the L. 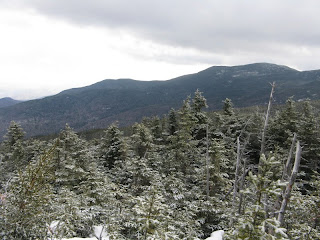 Peering back, there is a peek at Franconia Ridge behind the south end of Cannon. 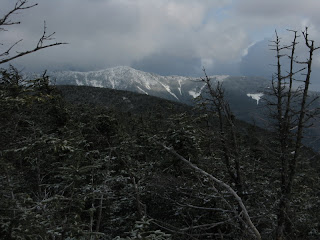 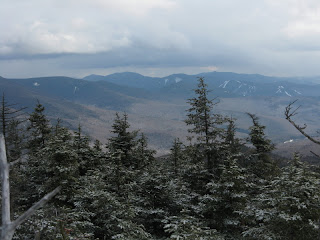 Mt. Liberty is to the SE. 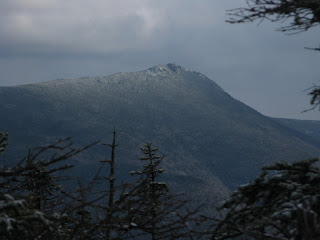 Looking south down the Pemi River valley; Mt. Pemigewasset (Indian Head) is just L of center in the foreground. 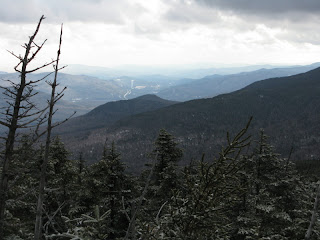 Back at the E end of the summit crest, a boulder provides a vantage for admiring the impressive bulk of Cannon. 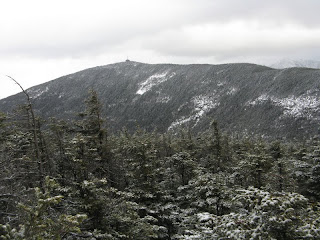 At the start of the steep descent, the world drops away to Coppermine Col. 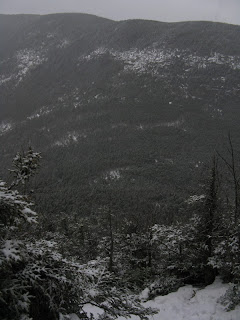 Approaching the ledgy slot from above. This was a tricky spot on the return trip - I chose to back down through the slot, then turn around and resume a careful forward snowshoe descent, using short firmly placed steps. 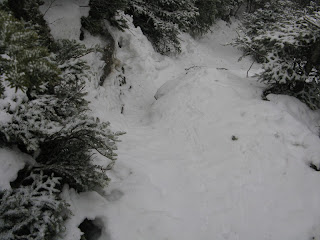 Back at Lonesome Lake, I paused to admire late afternoon views of South Kinsman... 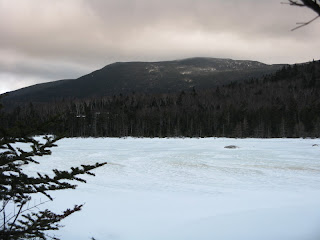 ...and North Kinsman. From here it was an easy cruise back down the packed highway of the Lonesome Lake Trail. 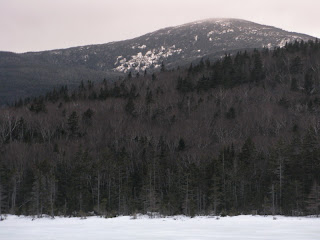