The Kilkenny region in the White Mountains has a strong appeal to hikers who like solitude with their scenery. Beautiful woods (including some of the most expansive birch forests anywhere), lightly trodden trails and several fine viewpoints draw Kilkenny devotees back again and again.

This week I needed to scratch the "Kilkenny itch," and when I proposed a journey to an elusive ledge on the SW flank of "Unknown Pond Ridge," fellow bushwhacking enthusiasts John Compton and Chris Whiton postponed plans for another exploration to come and check this spot out.

This was to be a leisurely day, with fairly short mileage and mostly open whacking through hardwood and birch. After meeting at Appalachia in Randolph, we carpooled for the drive up through downtown Berlin, out Route 110, and down York Pond Road to the fish hatchery and the Unknown Pond Trail parking area near the end of the road. At 10:00 we set out on the Unknown Pond Trail. After an initial half-mile along the grade of the 1890s Upper Ammonoosuc logging railroad, we climbed gradually up the valley of Unknown Pond Brook. 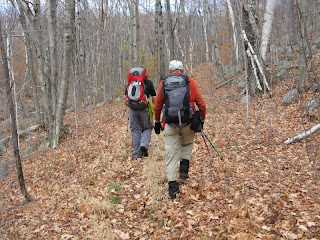 With the leaves down, we had many views of this pretty, cascading stream. 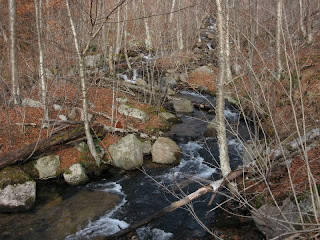 Partway up the valley we headed into the open hardwoods, which became somewhat brushy after the 1998 ice storm opened the canopy. Along the way there was abundant moose sign. 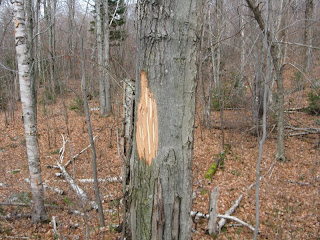 This was very pleasant post-foliage whacking. 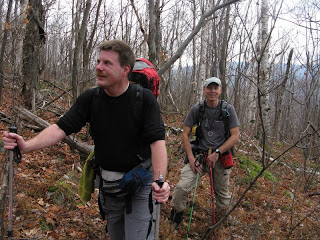 Higher up we entered the fabled Kilkenny birches, which filled in these clear-cut slopes after 30,000 acres were burned in a 1903 fire. 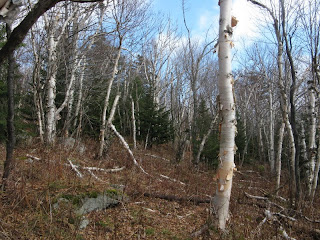 The summer's fallen ferns made for comfortable seating during a break. 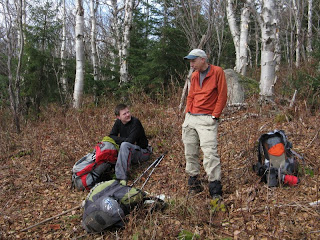 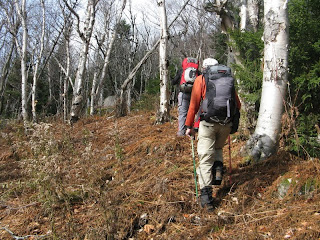 We crossed an interesting jumble of rocks shortly before we plunged into the conifers in search of the view ledge. On the first of three late 1990s snowshoe journeys along this "Unknown Pond Ridge," I failed in my attempt to find this ledge, though I did hit other viewpoints higher up. On two subsequent winter treks, one with Creston Ruiter and another with Cath Goodwin, we found the ledge, but only after considerable searching through rather steep, thick and rough terrain. 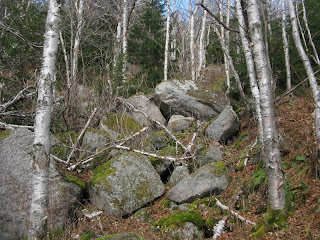 This time, we found the ledge fairly quickly, and 2 1/2 hours after we left the trailhead we emerged on its sloping granite expanse. 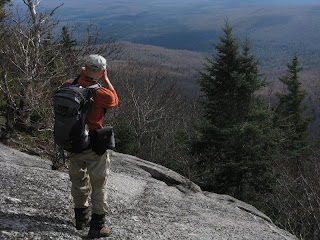 The morning's clouds were, as predicted, breaking up, bringing us an increasingly sunny day. It took a while for the fog to burn off the Presidentials and Carters, seen in the distance beyond the Crescent Range. What a great slab to hang out on in the warm October sun! 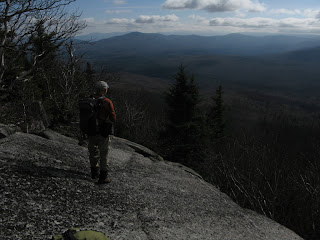 Close by to the west we enjoyed a unique perspective on Mt. Cabot, The Bulge and The Horn. 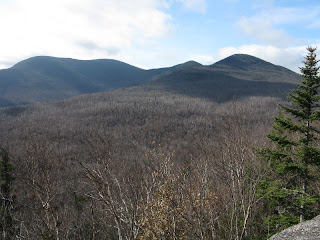 Cabot's bulk is impressive from this angle. 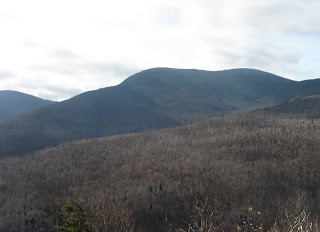 Chris peers over the edge with The Bulge and Horn above. The slab's grainy granite gave good grip for boots. 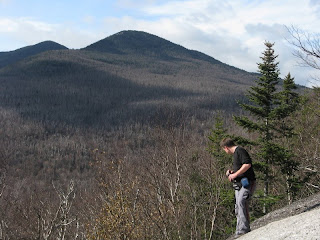 A zoom on The Horn, its slopes cloaked in endless birch forest. With binoculars we could spot the table-flat ledge that crowns the summit. 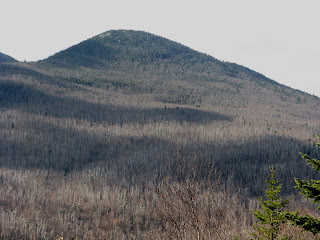 We had an unusual vista of Willard Notch to the SW: North Weeks on the L, South Terrace on the R, the long east ridge of Mt. Waumbek in the back. 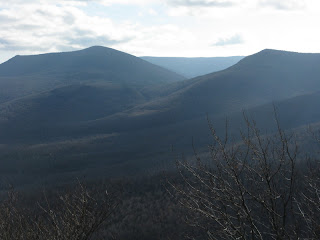 The distinctive profile of North Weeks. 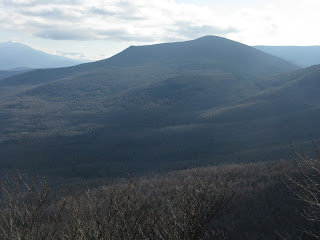 The Carters and Presys emerged. 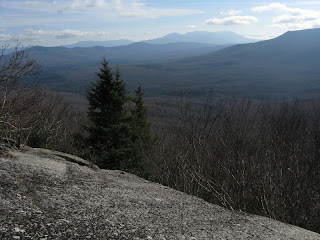 Zoom on the Presidentials, rising beyond the vast basin of the Upper Ammonoosuc River. 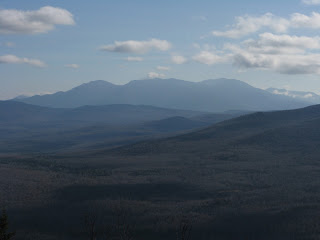 Two beaver ponds could be seen in the valley below. 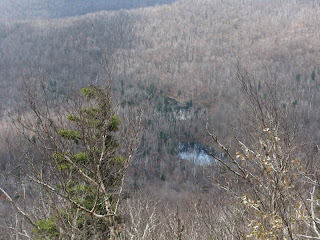 At the back edge of the ledge was a deep crevice. A bad place to drop a camera. 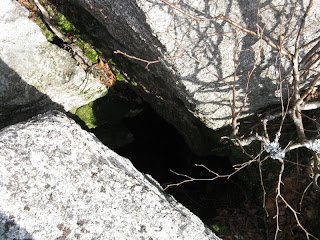 From the edge of the ledge you could peer down to the woods below. Chris made his way down there and said the massive slab was pretty impressive to look up at. 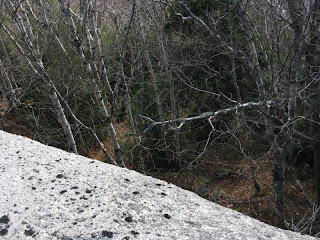 After a blissful 2 1/2 hours in the sun, we headed back into the woods for the descent. John paused to get a picture looking back up the birch-lined slope. 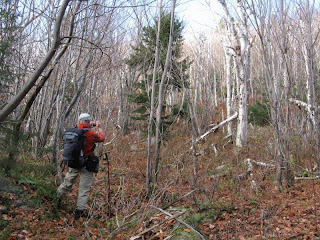 Back down on the Unknown Pond Trail, we made a couple of very short off-trail forays to admire some cascades. 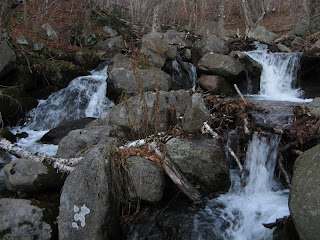 This lovely cascade and waterslide was an unexpected bonus. 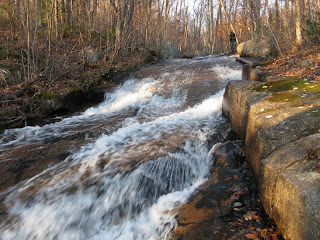 John aptly dubbed the lower part a "sheet cascade," where the water slides over a nicely jointed granite slab. 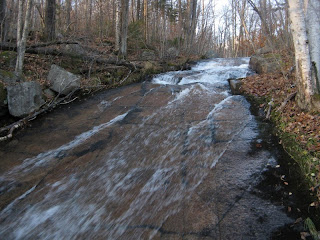 Heading out along the old logging railroad grade on the lower part of the trail. The maps I've seen of the Upper Ammonoosuc RR don't show the locations of the logging camps, but they must be out here somewhere. 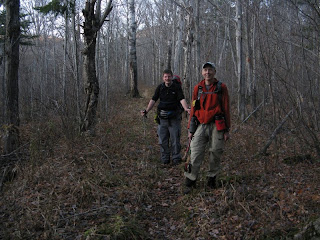 On York Pond Road near the trailhead we had a view back up to the south end of Unknown Pond Ridge. Our ledge is just visible on the upper left slope. It was a relaxing and rewarding Kilkenny journey. 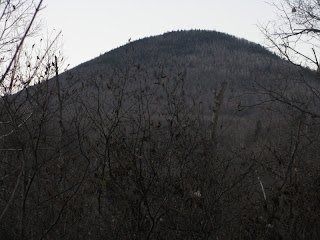