Late October: time to clean the drainages on the west loop of the UNH Trail on Hedgehog Mountain, which I "adopted" through a cooperative program of the Saco Ranger District (White Mountain National Forest) and the AMC. Joining me was good friend and stalwart trail worker Dave Stinson, who drove all the way up from Newmarket, NH to help out. The primary task for today was to hoe out the waterbars and drainage outflows, which were brimming with newly fallen leaves. We also did some intermittent brushing along the way. 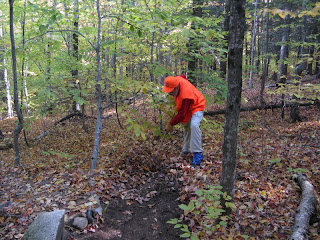 Dave brought two long-handled garden hoes. I usually use a heavier hazel hoe, but decided to try the garden hoe out this time. It's alot easier on the back, especially when wearing a pack while cleaning waterbars. I remember trailwork guru Hal Graham of Trailwrights and Belknap Range Trail Tenders recommending a garden hoe for drainage cleaning at one of the annual Four Thousand Footer Cub dinners. After using one for a day, I think I'm a convert.

It was moose hunting season, so we wore our blaze orange in this moose-haunted region. 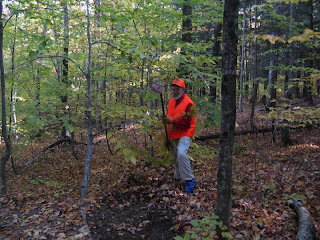 We know we're getting near the top of Hedgehog when we reach a side path to a ledge just right of the trail with a nice view of the Tripyramids over the Downes Brook valley. 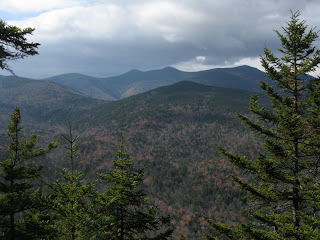 Ledges on the final approach look north to Mt. Tremont/Owl Cliff (left) and Bartlett Haystack (right) with a socked-in Mt. Washington in the center distance and Carter Dome on the far right. 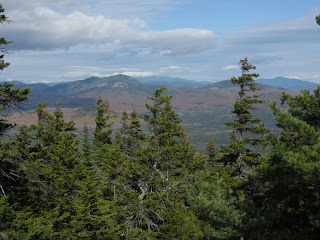 Near the summit we found a trailside clump of a lichen that I believe is Bighorn Cladonia (cladonia cornuta). It's rather stiff and prickly to the touch. 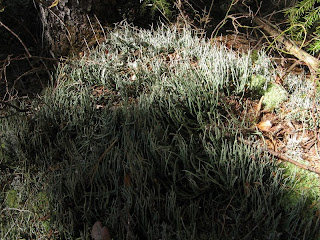 From the NW outlook at the summit Mt. Carrigain rises behind Green's Cliff. 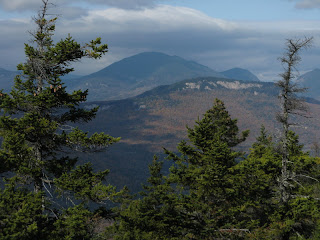 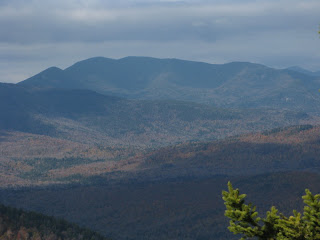 After several hours of trail work, Dave takes a well-deserved break at the summit of Hedgehog. In the southern Whites it was a gorgeous late October day - sunny and comfortable. 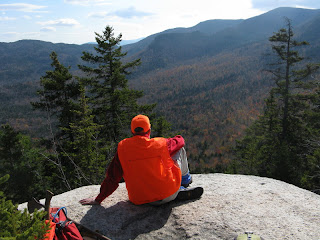 When at the summit, I always drop carefully down some ledges to a lower perch with a wide-screen vista over the Oliverian Brook valley. Mt. Paugus is on the left. 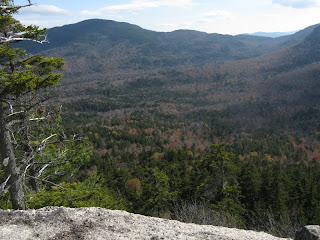 On the right side of the valley are the eastern spurs of Mt. Passaconaway. 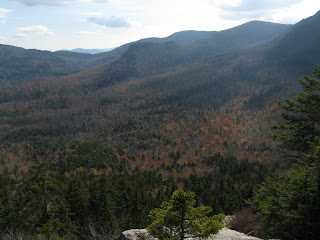 On the far right, the great looming hulk of Passaconaway itself. 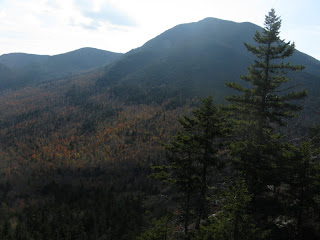 From this angle you get a good profile on the ridge of Square Ledge (in foreground; Wonalancet Hedgehog in back), with its nubbly wooded summit on the right end. 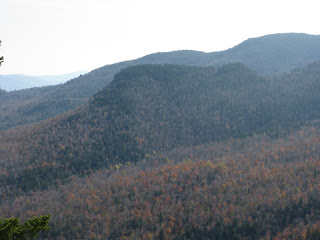 Since it was early afternoon, we decided to do the scenic loop over the East Ledges. As the trail descends by rough zigzags off the summit, views open up from several ledges. 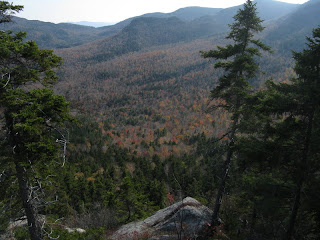 The trail ducks into the woods to skirt this rocky hogback. 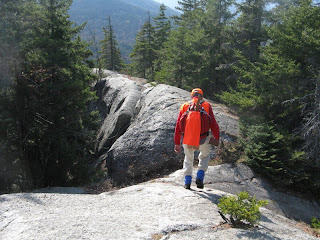 Another in the series of vistas. 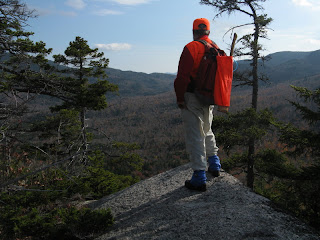 Hedgehog is a little peak at 2,532 ft., but it has plenty of rugged and rocky terrain. 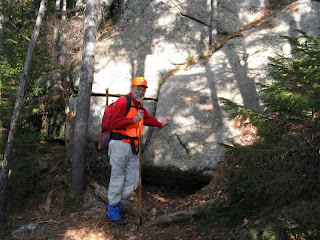 Below the steep descent there's a pretty corridor through a spruce grove. The stretch of trail between the summit and East Ledges is wild and beautiful. 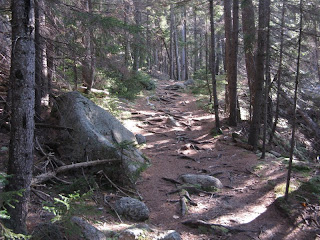 Dave emerges on the East Ledges in the shadow of the main summit. 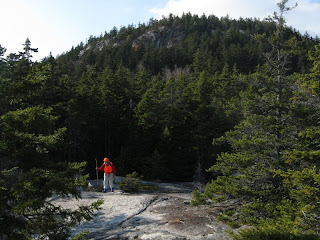 The expanse of granite along the western part of the East Ledges is one of my favorite spots in the Whites. Many an extended break has been enjoyed here while gazing south into the Oliverian basin. 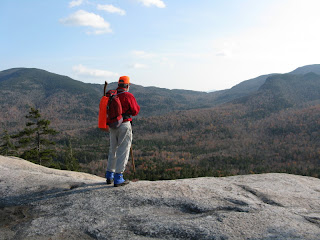 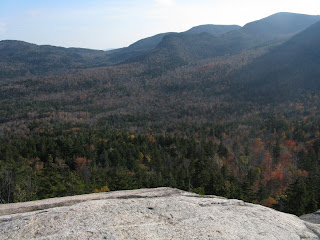 As the trail heads towards the eastern part of the East Ledges, it tightropes along a clifftop. 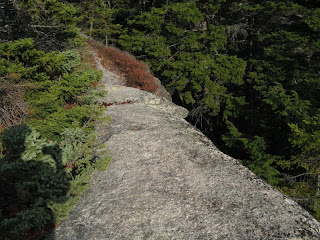 From the eastern ledge area Mt. Chocorua is a prominent feature of the view. 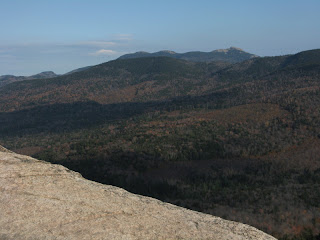 Down on the floor of the valley is a small beaver pond/meadow. 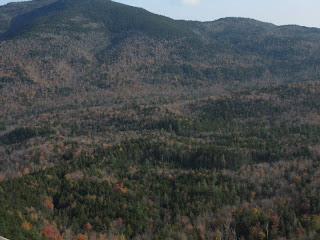 I enjoy visiting this remote wetland in winter. From one edge there's a view up to the East Ledges (right) and the Hedgehog summit (left). 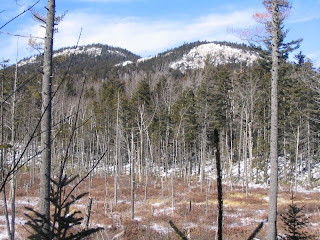 From another spot Passaconaway reigns supreme. 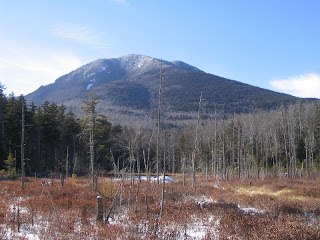 Hikers ascending to the East Ledges see this sign shortly before emerging on the slabs. 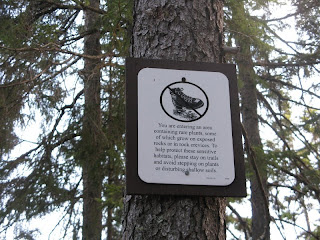 This view to Bear Mountain (left), Table and Big Attitash Mtns. (center) and North Moat (right) is found at a corner 0.2 mile below the East Ledges. 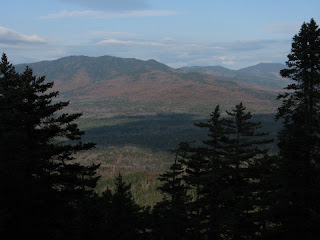 Farther down there was still some late interior forest foliage. 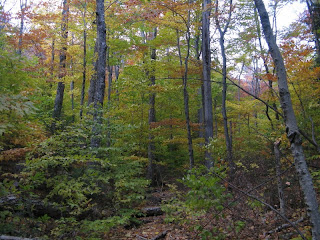 As we descended to the floor of the valley on the east loop of UNH Trail, we heard two booming gunshots to the north, across the Kancamagus Highway. But no moose hunters were seen or heard on our side of the road. In any case, with the various hunting seasons now in progress, wearing blaze orange is highly recommended for the next six weeks at lower elevations and especially if bushwhacking.
Posted by Steve Smith at Friday, October 23, 2009