The snow that fell earlier this week coated the woods from 2500 ft. up. John Compton and I agreed that it was too early in the season to deal with that, so we opted to stay low, where it was still autumn. John had never been in the Oliverian Brook valley, a broad and remote basin between Square Ledge and Mt. Paugus in the Sandwich Range Wilderness, so that was our choice for the day. This is the middle of the valley, seen from Square Ledge. 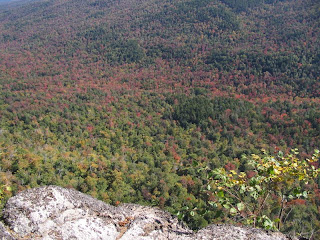 Our objective was a small cliff on the west slope of "The Overhang" (a spur of Mt. Paugus) that I visited two years ago. The cliff is densely grown on top, but still affords some unique views. 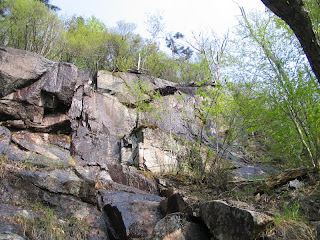 The Oliverian Brook Trail is a gentle and pleasant route up the valley, with many brook vignettes along the way. This spot is a few yards off a section of trail that follows the bed of a branch of the Swift River logging railroad (1906-1916). 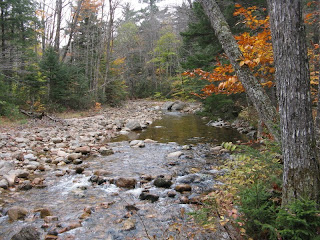 New signs at the junction of Oliverian Brook Trail and Passaconaway Cutoff. 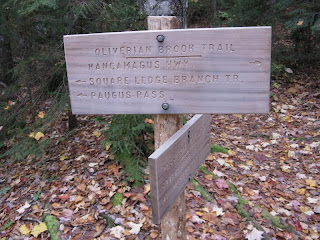 Farther up the valley we stopped to admire this big sugar maple. 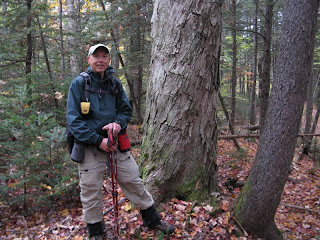 Parts of the trail were colorfully carpeted. 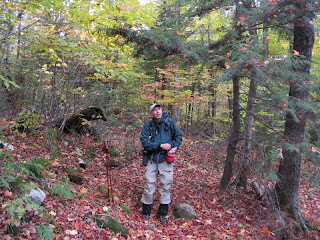 A gravelly spot in Oliverian Brook where the trail crosses it, 2.7 miles up the valley. 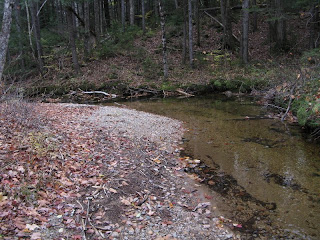 Another face of Oliverian Brook. A fine sense of remoteness in here. 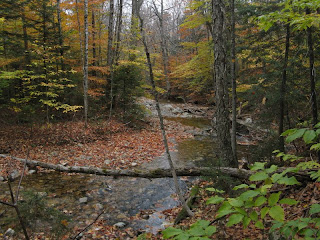 We left the trail by another crossing and headed into woods both thick and thin. This open conifer grove was a nice stretch of whacking. 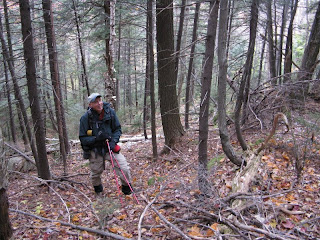 At the top of the cliff the vegetation was rather dense. 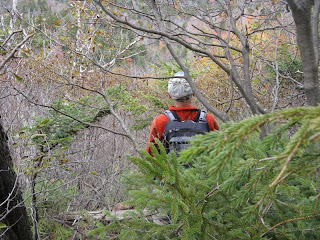 But the standing view was worth it, looking across the valley to snow-speckled Mt. Passaconaway rising behind the great rock face of Square Ledge. 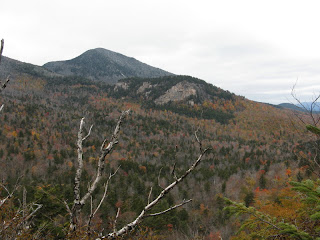 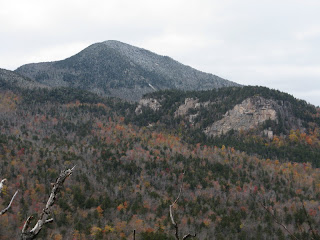 Square Ledge is one of the more impressive cliffs in the Whites, the more so for its remote setting. In his 1916 book, Passaconaway in the White Mountains, Charles Edward Beals described it as "a gigantic scarred face of perpendicular ledge." The 1901 Wonalancet guidebook to the Sandwich Range said "The rock splits in great rectangular blocks and breaks away from below so that the upper part of the cliff overhangs the base. Facing the east it is dazzlingly beautiful in the morning." While eating lunch in the scrub, we were surprised to see several hikers emerge at the outlook atop the cliff. Square Ledge is not a popular destination, and it was midweek after Columbus Day. We met that quartet of hikers later back at the trailhead.

In ascending to the clifftop, the Square Ledge Trail traces a bold route through the diagonal belt of woods to the left of the main cliff face. 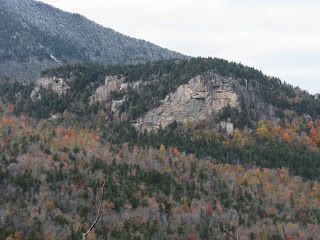 Our vantage also offered a view north to Mts. Hancock and Carrigain beyond Hedgehog Mtn. (right) and Potash Mtn. (left). 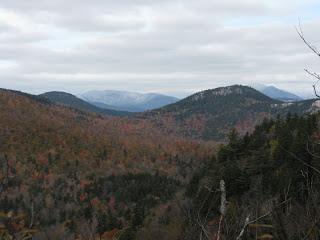 Hancock looked quite wintry in the dull, gray, November-like light, with some late foliage in the foreground. 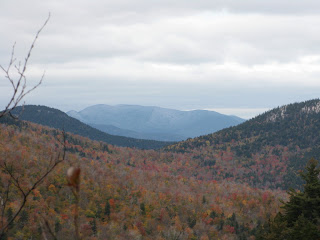 John spotted a lower ledge on a nearby spur, so after lunch we headed across this minor ridge through prickly woods. Partway across our traverse, an opening provided a nice view up to Passaconaway and its SE spur, Nanamocomuck Peak. 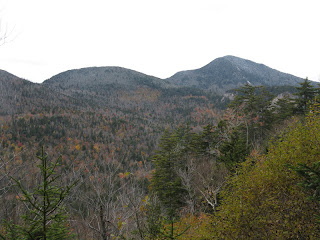 The spur proved to be surprisingly steep and rugged, with several cliff bands to work around. After a slow, careful descent, John found the ledge down below. It was a nice spot, though the view was restricted. 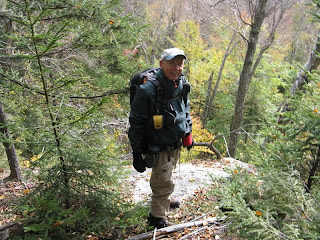 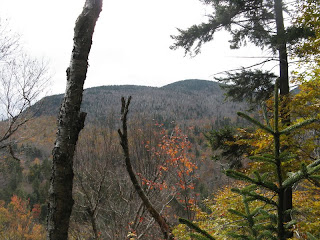 A glimpse south to the head of the valley at Paugus Pass. 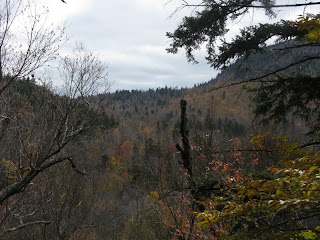 By mid-afternoon we had descended back to the trail. At this crossing of Oliverian Brook there is an old log staircase on the west side. We poked around the area in the hope of stumbling on an old logging camp, but no luck. 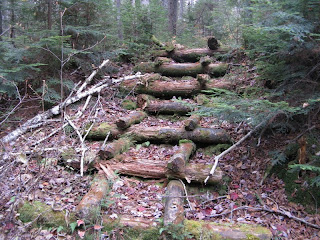 Returning down the trail, we heard rushing water down to the left. A short bushwhack led us to this pretty little cascade. 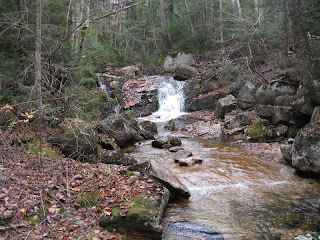 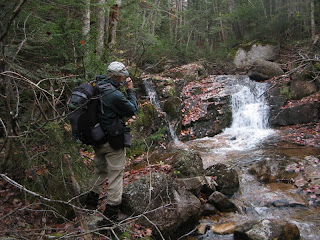 Farther down the valley we made another bushwhack to this cascade on a tributary brook. 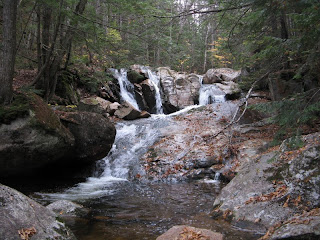 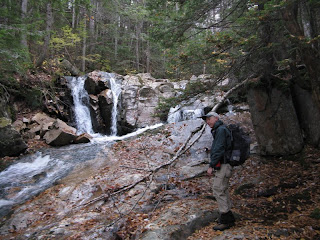 We made it out with daylight to spare, having enjoyed a mellow valley ramble with some interesting exploration, all below the snowline.
Posted by Steve Smith at Friday, October 16, 2009