With rain in the forecast in the afternoon, we decided to stick with a mini-hike or two as long as the weather held out. In the morning we went to an unusual place called Pratt's Rock, in the town of Prattsville. Zaddock Pratt was an ambitious and eccentric businessman who ran a large tannery operation here from the 1820s into the 1840s. It's said a million hides were tanned here using tannin extracted from the bark of thousands of hemlocks cut from the surrounding slopes. Where we had lumber barons in the Whites, the Catskills had tanner barons. Apparently Pratt was well-liked, for the locals changed the name of the town in his honor. He went on to become a U.S. Congressman and founded the National Bureau of Statistics.

Pratt also had an ego the size of Slide Mountain, and he commissioned a series of sculptures in a cliff near the tannery to memorialize his life. 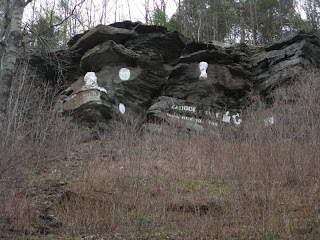 A rather steep half-mile trail led up to the base of these cliffs, where we got a close-up view of the sculptures. 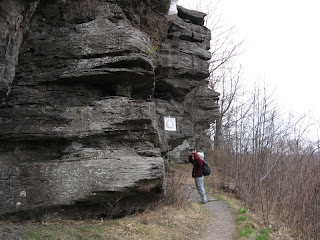 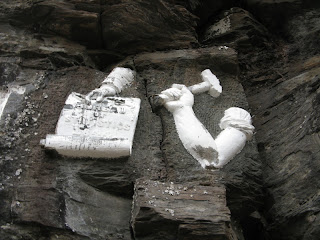 An extension of the trail brought us to the top of the cliffs, where we got some nice if chilly views up the Schoharie River valley to North Dome and Sherrill, two of the Catskill high peaks, in the distance. 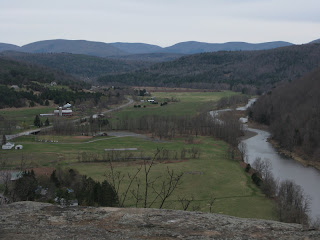 After checking out a gravesite where Pratt buried his favorite dogs and horses (he owned over 1,000 horses during his lifetime), we drove to the town of Hunter for our annual stop at the excellent Catskill Foundation bookstore. Still no rain, so we took a stroll to a waterfall and old concrete dam a half-mile up the Becker Hollow Trail, one of the major routes up Hunter Mountain. 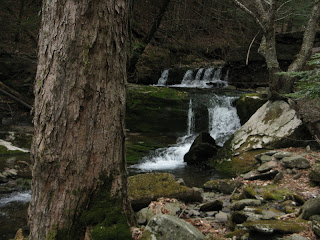 Next we drove a couple miles up the road to the famous Stony Clove, a deep gap between Hunter and Plateau Mountains. Nineteenth century visitors reveled in its gloom. One wrote, "It is the loneliest and most awful corner of the world that I have ever seen...It is the type of valley of the shadow of death; in single file did we pass through it and in single file must we pass to the grave." The small Notch Lake adds a softer touch to the scene. 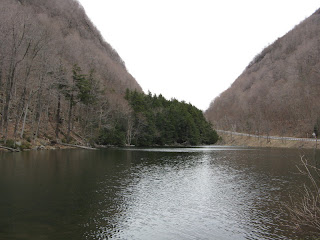 While Carol waited in the car, I hiked a quarter mile up the Devil's Path (great name!) and made a short whack up a brook to a mossy cascade called Stony Notch Falls in the Catskills Waterfalls book and on one of my numerous Catskill maps. 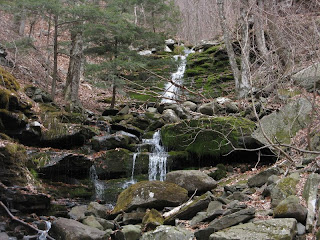 It began snowing while I was admiring the waterfall, time to leave the woods and head for our house for the rest of the day.
Posted by Steve Smith at Wednesday, April 29, 2009