After a day housebound by dense fog, we were anxious to get out for a day in the woods. Despite a threat of showers in the afternoon, the day turned out fine with sun followed by high clouds. We headed over to the Big Hollow trailhead for a loop over Acra Point, a 3100-ft. peak on the Escarpment, the eastern front of the Catskills that rises abruptly from the Hudson valley.

Unexpected morning sun beamed down on us as we climbed the mellow mile to the ridge on the Black Dome Range Trail. Yellow violets and spring beauties graced the forest floor. Up in the trees a squadron of sapsuckers kept up a constant chorus of tapping, my favorite sound of the April woods. At the ridgecrest, we turned right on the 24-mile-long Escarpment Trail. 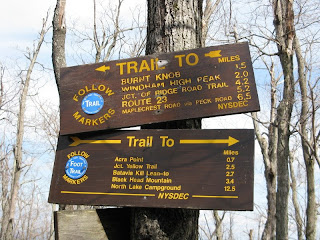 After a short climb we emerged on a flat sandstone perch with fine views, prompting Carol to break out her video camera. Burnt Knob (L) and Windham High Peak (R) are behind her. 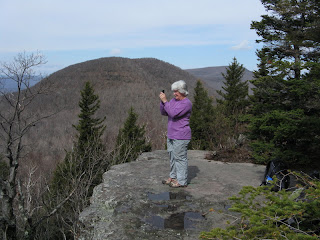 The classic view from Acra looks across the Big Hollow valley to the distinctive profile of the Blackhead Range. L to R: Blackhead, Black Dome and Thomas Cole. 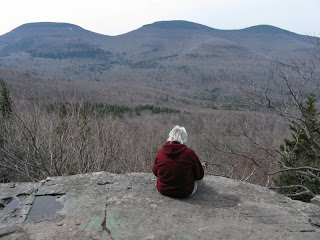 While sitting here, we watched two adult bald eagles play a swooping game of tag high above the valley. After an hour in the sun, we headed south on the Escarpment Trail for an easy 2 1/2 mile ridge walk, mostly through hardwoods badly damaged by the 2007 ice storm, then segueing to conifers at the end. 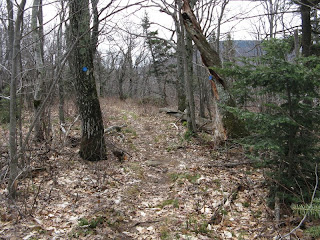 At the Batavia Kill Trail junction, Carol turned right and ambled down this mellow trail to complete the loop back to the car. 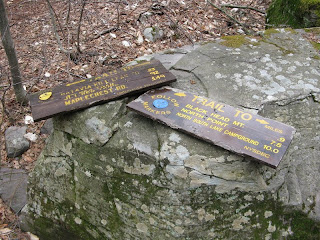 Meanwhile, I continued south towards Blackhead Mountain, wanting to check out a viewpoint called Yellow Jacket Lookout. If possible, I would make a loop over Blackhead and return to the car from Lockwood Gap. But the upper part of this climb is very steep and I knew it could still be icy. On the climb to the lookout the trail led through some nice birch forest. 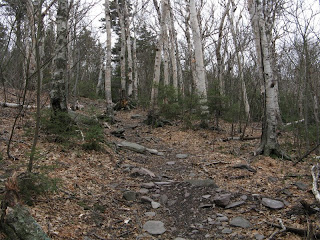 Yellow Jacket Lookout looked far out over the Hudson valley to ridges in Massachusetts on the horizon. 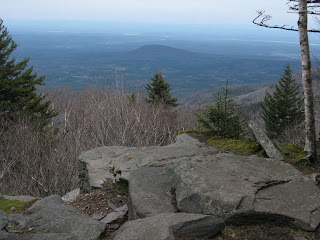 The trail continued up through gnarled, scrubby old hardwoods, with a couple views back to Acra Point and the ridge we had traversed. 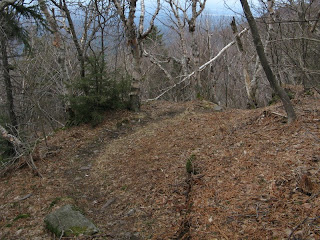 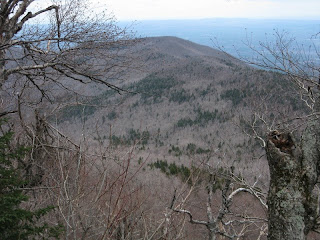 At 3500 ft. the ice began. As this side jaunt up towards Blackhead was impromptu, I didn't have my Microspikes or Stabilicers with me. I picked my way up another 100 ft. or so in elevation, but on the really steep pitch, which was merely an icy chute, I decided it would be foolish to continue up. Even with 'spikes or 'icers, I probably would have turned back. 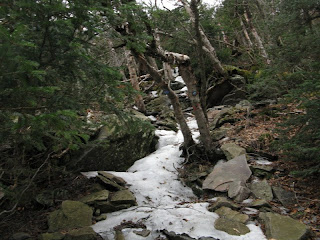 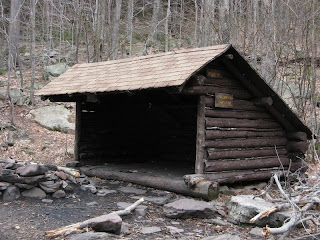 Near the bottom, Batavia Kill (in the Catskills streams are called "Kills," a Dutch word) flows over mossy ledges, a typical scene in these mountains. 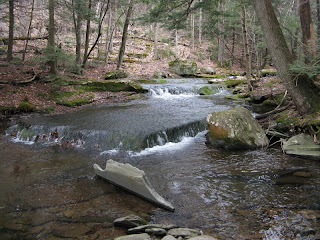 After the hike we went into the ski town of Windham for dinner and discovered the Cave Mountain Brewing Co. They just opened last September and offer great food, beer and atmosphere. Highly recommended!
Posted by Steve Smith at Thursday, April 30, 2009