November is a fine time for lower elevation bushwhacks, while the ground is still free of snow. For this trek I made a return visit to a clifftop ledge on a northwestern shoulder of Mt. Moosilauke that offers a unique view into the huge basin known as Tunnel Ravine or Benton Ravine. I first went to this ledge on a late November probe into the ravine in 2014 with John "1HappyHiker" Compton. We marveled at the view, but could stay only briefly due to the lateness of the hour.  I went back in summer two years ago and spent an hour lounging in the sun. With the higher ridges caked in new snow, today's trip promised a different look for the imposing ravine headwall.
The approach involved a three-mile walk up the Tunnel Brook Trail. Along the decommissioned road section of the trail there was a nice view of the wide brook, flowing strongly from recent rains. 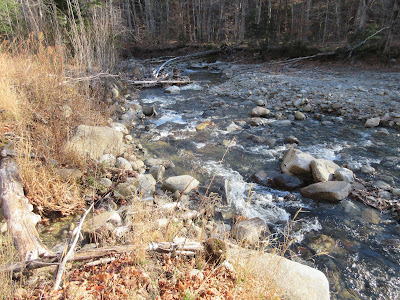 I left the trail at a hardwood glade where rocky rubble from Tropical Storm Irene's floodwaters is strewn through the forest. Right here I had a sighting of a white-tailed deer, and farther along in the bushwhack I saw many deer prints punched into the soft duff. 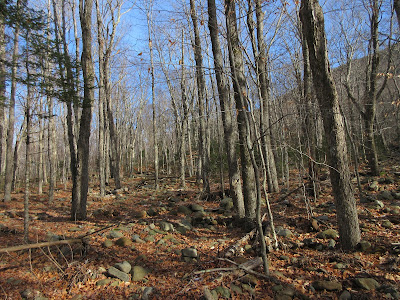 The nameless stream that drains the ravine carved quite a channel during that 2011 storm. 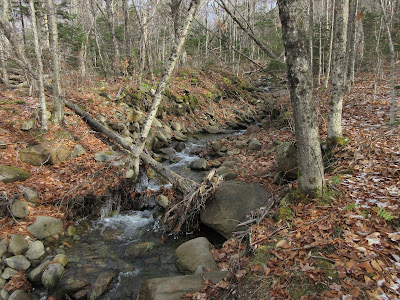 Side view of the rubble. 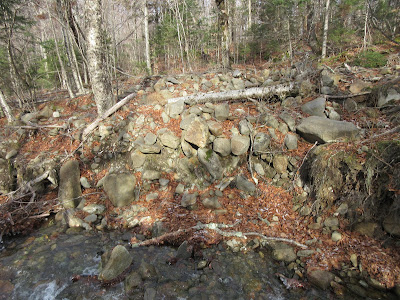 Partway up the ravine I crossed the brook, which seems get larger as you head up the drainage. 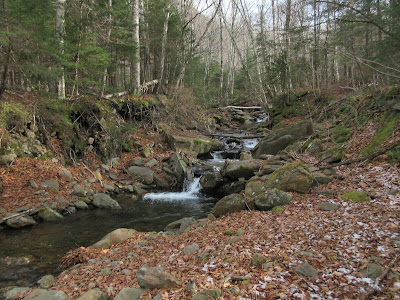 I then ascended the long slope towards the shoulder and the ledge, at first through nice open woods. There was a dusting of snow, but not enough to make the footing too slippery. 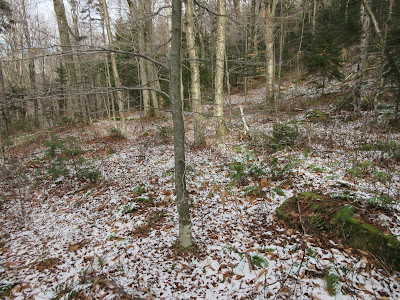 The climb soon became steep, with a few obstacles to work around, such as this ledge... 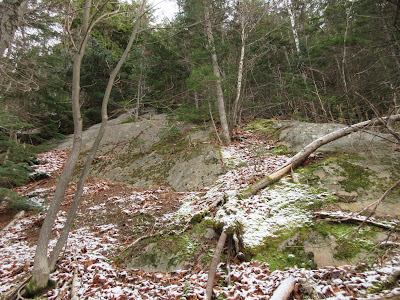 ...and some areas of blowdown. 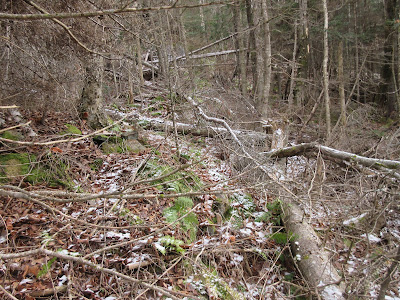 The slope remained steep, though the woods were reasonably open until I reached the wind-tangled scrub at the precipitous edge of the shoulder. 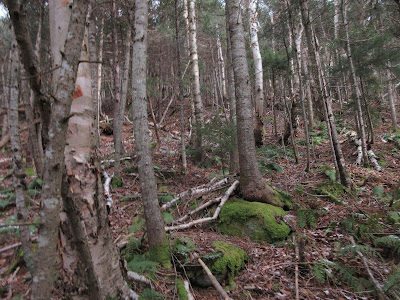 I visited several ledges along the edge, seeking the one that had the best perch and view. Between the ledges the scrub was dense. 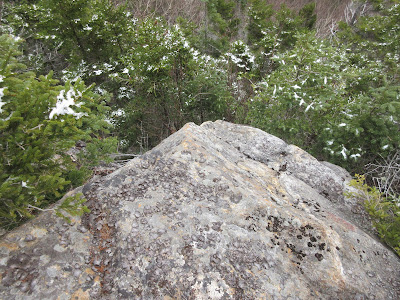 Found it! This is one of those needle-in-a-haystack spots. 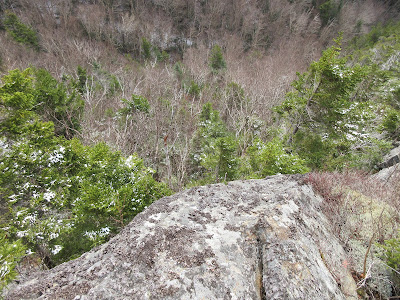 The ledge is hidden, and well-guarded by, intertwined mountain holly scrub. 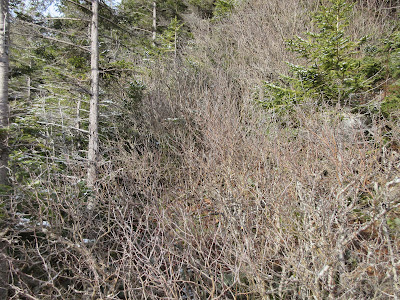 Here there is a down-look to the winding lower floor of the ravine. 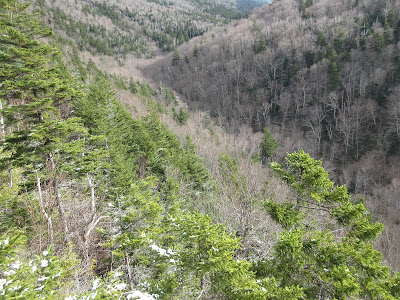 To the southwest is the slide-streaked face of Mt. Clough, overlooking Tunnel Brook Notch. I could see at least part of eight of the nine slides on the mountain's steep eastern face. 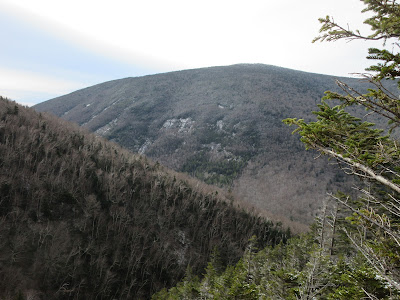 The view up to the headwall of Tunnel Ravine did not disappoint. 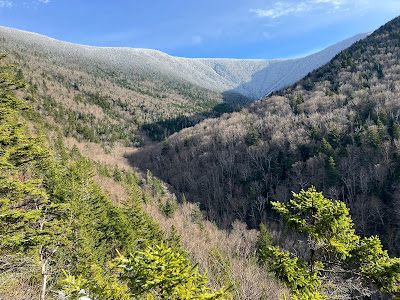 Part of the massive 2011 slide can be seen at the bottom right of the headwall. According to geologist P. Thompson "Thom" Davis, this is one of four glacial cirques on Mt. Moosilauke, the others being Jobildunc Ravine, Gorge Brook Ravine and Little Tunnel Ravine. I layered up and sat here for quite a while in the sun, absorbing this wild scene. 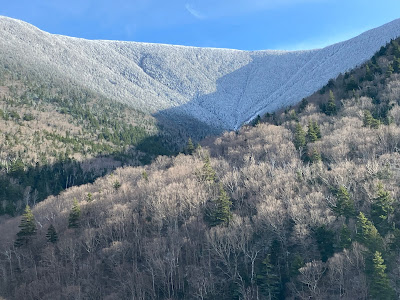 Before heading down, I probed a little farther up along the edge of the shoulder for possible additional views. 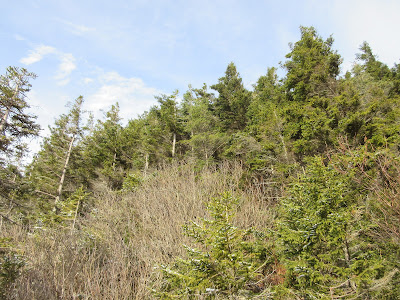 The woods here were rather prickly. 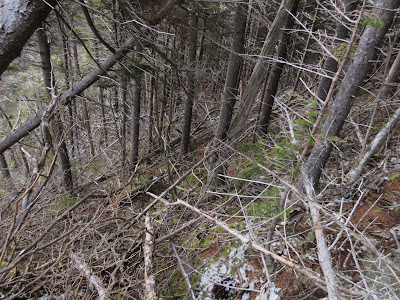 A blowdown opening revealed a higher perspective on the headwall, with more of the base revealed. 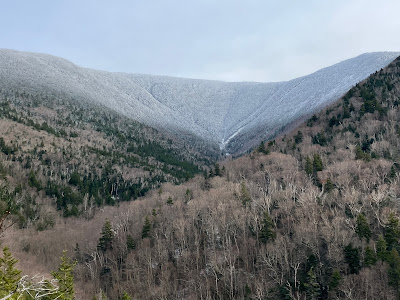 Back down to the attractive brook after a steep descent. 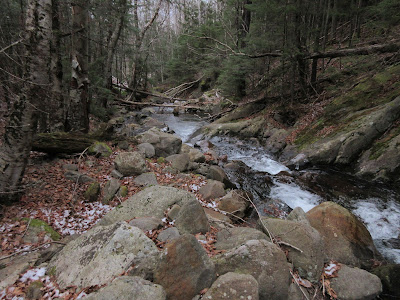 Descending through a fine sugar maple glade, with Mt. Clough beyond. 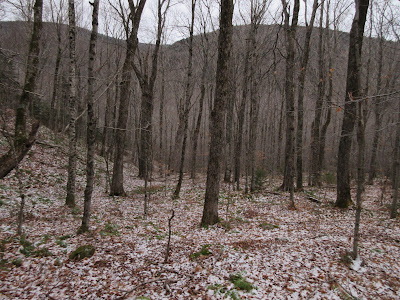 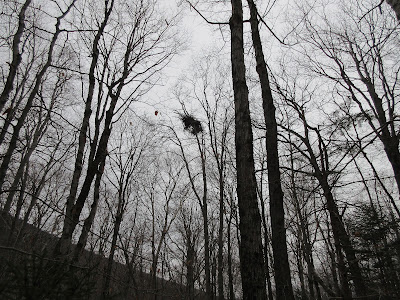 I made a short bushwhack to a beaver meadow along Tunnel Brook before heading out and reaching the trailhead just before dark. 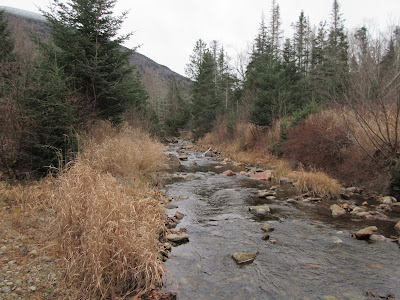