After an exceptionally warm early November, a couple of snowfalls and plummeting temperatures brought the winter vibe to the Whites in a hurry. Time to break out the winter boots, gaiters, extra layers in the pack, traction etc. It always takes me a hike or two to acclimatize to winter conditions, and one of my regular treks this time of year is up the mellow, usually ice-free Livermore Trail and into Avalanche Ravine on the NW side of Mt. Tripyramid. When conditions permit, I like to go partway up the North Slide for a view.

There were a couple of inches of crunchy snow in the woods at the Livermore trailhead. Despite thin cover on the first couple miles of Livermore Trail, some early-season skiers had been out. 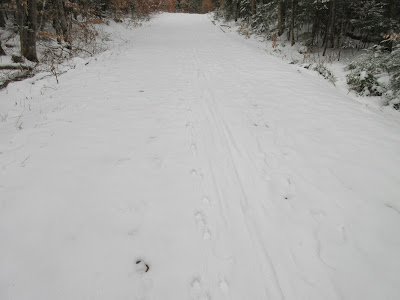 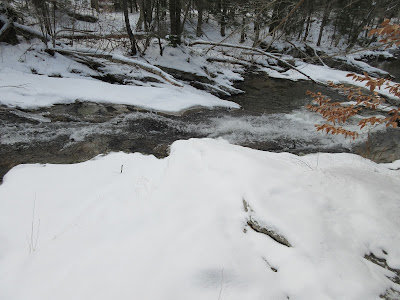 A large metal artifact at Avalanche Camp, used by Parker-Young Company loggers in the 1930s and 1940s, gets ready for perhaps its 80th winter. 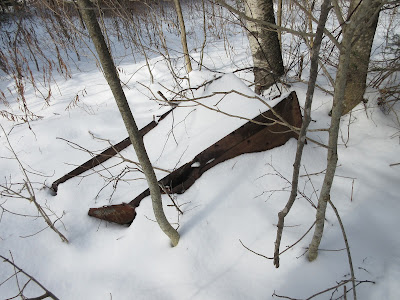 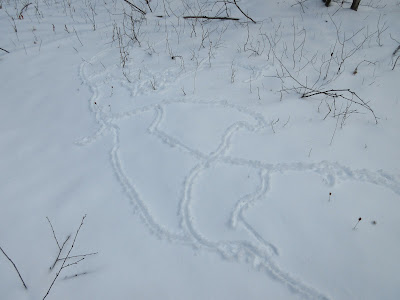 The way to North Tripyramid. 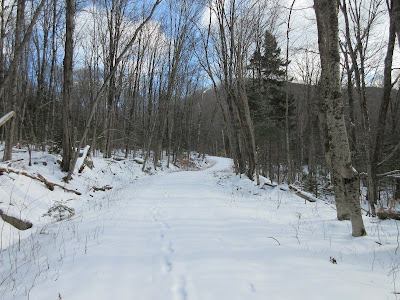 From the junction with the north end of Mount Tripyramid Trail, I followed a favorite bushwhack route along an old logging road on the north side of Avalanche Brook. 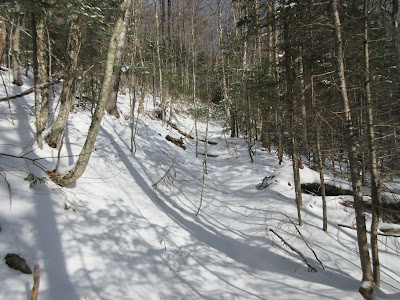 In the woods here there was up to 6" of snow with a crunchy layer on top. 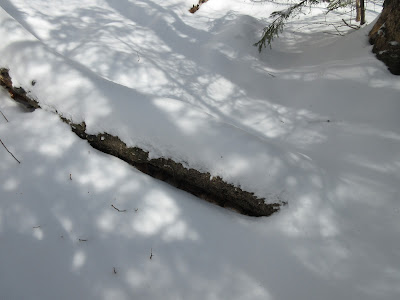 An open sugar maple glade near a tributary that flows down under the south side of Scaur Peak. 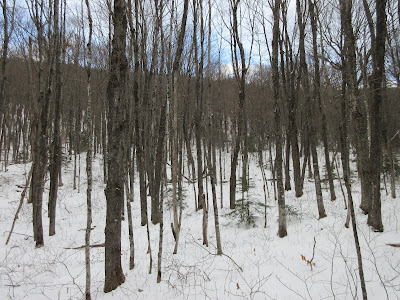 "Breaking trail" for the first time this season. Almost enough for snowshoes. 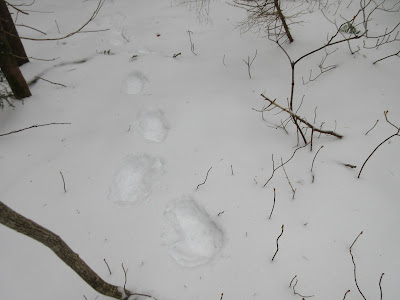 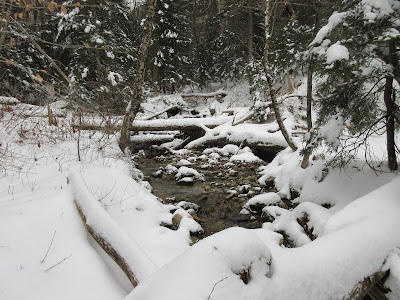 Bushwhacking up the broad floor of the ravine, between the brook and the Mount Tripyramid Trail. 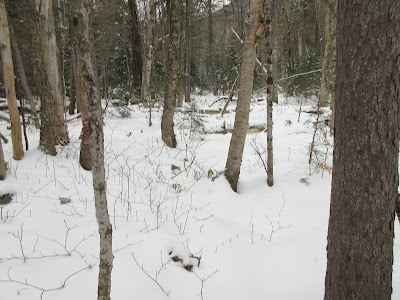 I cut over to the trail and followed it up to the lower part of the North Slide. 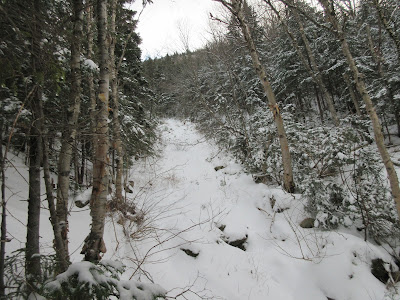 Following the trail corridor parallel to a deeply gullied section of the slide. It's steeper than it looks. Someone had descended the North Slide after the initial snowfall. Those frozen bootprints, and the crunchy nature of the snow, made it relatively easy to go up and down the steep pitch. Powdery snow atop ice would have been far trickier. 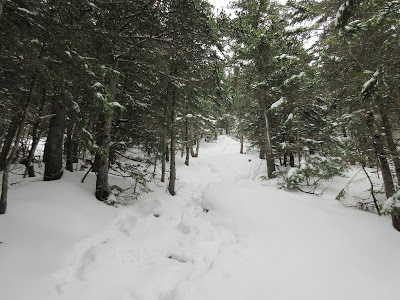 I ascended to a favorite spot at 3000 ft., above which the slide gets trickier. I fashioned a seat from my pack and had lunch while admiring the somewhat fuzzy view out to the Osceolas and a socked-in Mt. Moosilauke beyond. 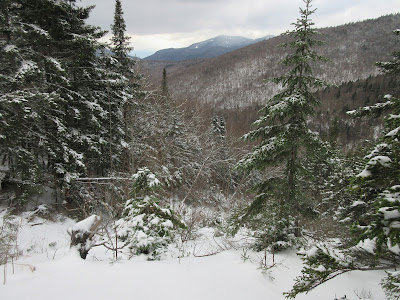 A closer look at Breadtray Ridge, Mt. Osceola (with the tip of the Southwest Slide visible), and the summit of East Osceola. 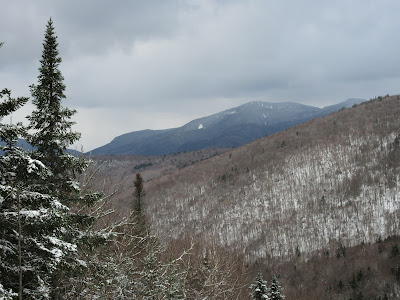 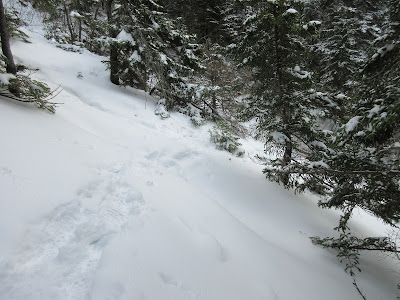 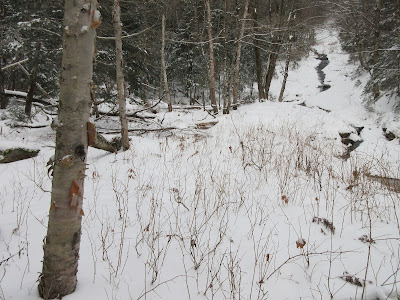 The pool at the base of the East Fork had iced over, but the stream above was still flowing. 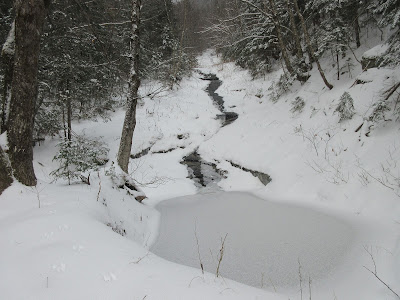 On the floor of Avalanche Ravine. 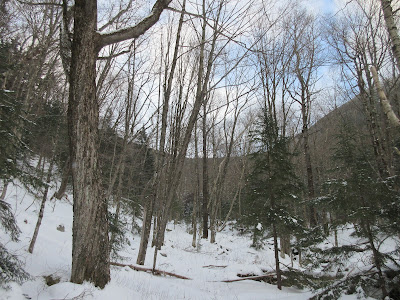 The North Slide looks imposing from down here. 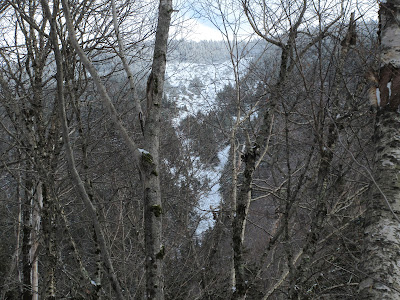 Gnarled yellow birches near the entrance to the ravine. 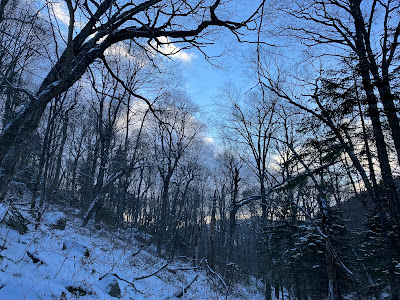 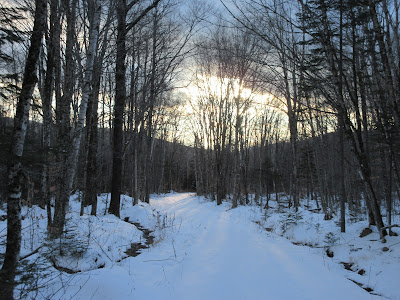