On a chilly day with fuzzy views I enjoyed excellent off-trail snowshoeing at Lincoln Woods, climbing up the western slope of the western peak of Mt. Hitchcock (aka West Hitchcock) to a small but prominent slide that offers interesting views. The slide is close to home - it is visible from the end of our driveway! There's a good view of it from the Kanc Highway bridge over the East Branch, as seen below, and it is also seen along the first part of the Lincoln Woods Trail. 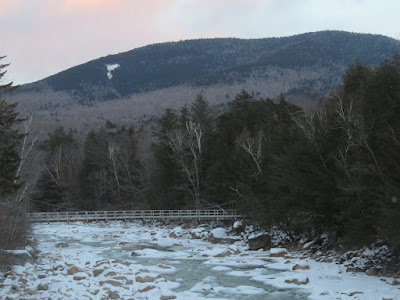 I went a mile in along the Pemi East Side Trail, pausing to admire this view back to the slides on Scar Ridge. 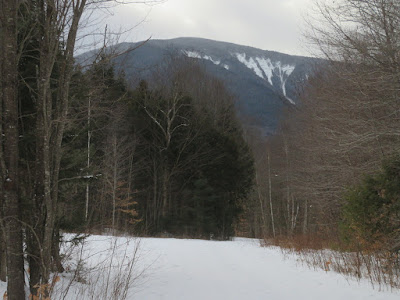 Most of the whack up to the slide was through open hardwood forest, populated with plenty of beech saplings. 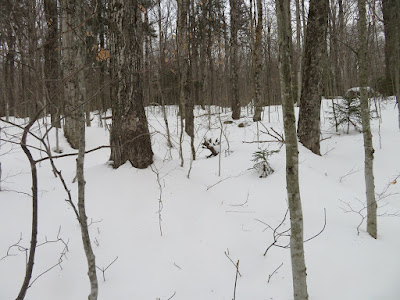 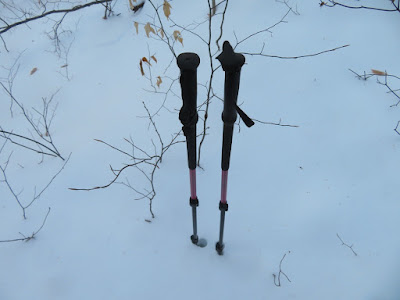 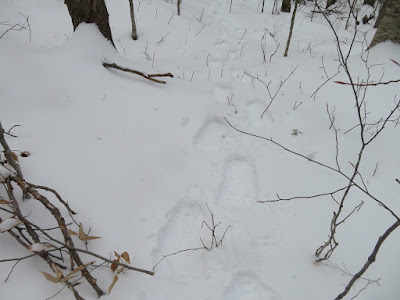 I passed some good bear trees along the way. 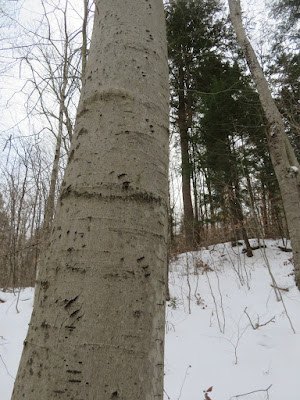 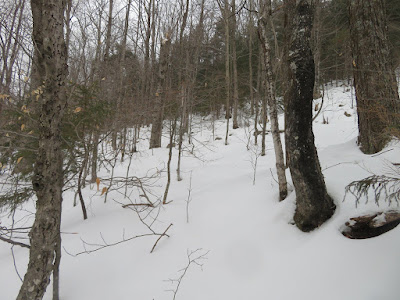 Serious uphill through open spruce forest, where the snow cover was thin. 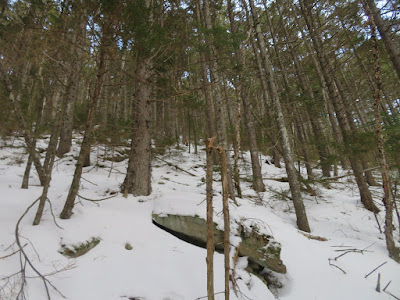 Due to lazy navigation I came up too far to the north and had to make a steep sidehill traverse, which was sketchy with the sparse cover. 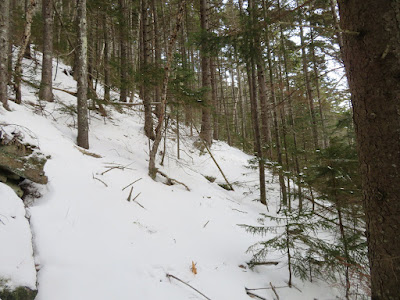 Eventually I emerged on the lower, narrower half of the slide. I had hoped to climb to the wider upper slabs, but the snow cover was variable in depth atop a layer of hardpack and ice, and a test showed my snowshoes slipping where the cover was thin. With bitter cold weather moving in, discretion was in order. 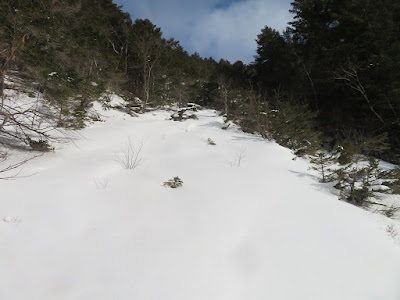 A side view gives a better indication of the steepness. 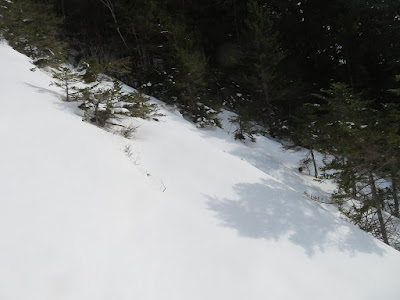 I edged out carefully and stomped out a small platform from which to have a late lunch and enjoy the fine view of Scar Ridge and Black Mountain, with the Loon North Peak ski trails peeking over in back. 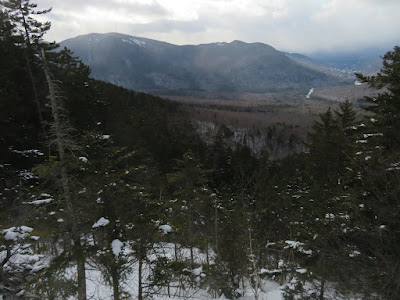 A long view down the East Branch valley to the Loon base area and the town of Lincoln beyond. On a clear day there would be a broadside view of Mt. Moosilauke in the distance. 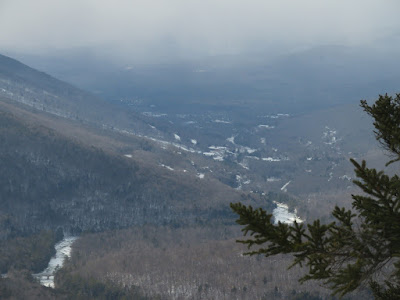 On a spring day back in 1998 I circumnavigated the entire slide, and from the south side of the upper section (which consists of dangerous overlapping ledge slabs) there were additional views to Whaleback Mtn. and Mt. Flume. 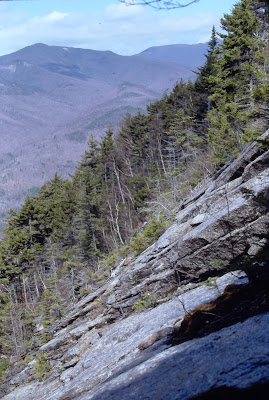 Zoom on the Kanc Highway bridge over the East Branch. 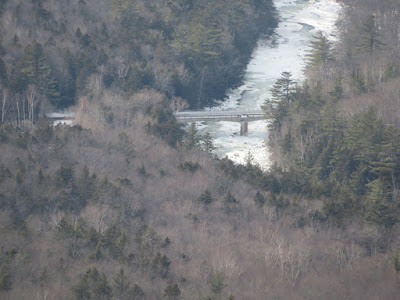 On the return trip I descended along the lower part of the slide, which is now partly revegetated. The slide looks recent in a 1939 aerial photo, so it may have fallen in the November 1927 rainstorm, which triggered the nearby Cedar Brook Slide on Mt. Hancock. 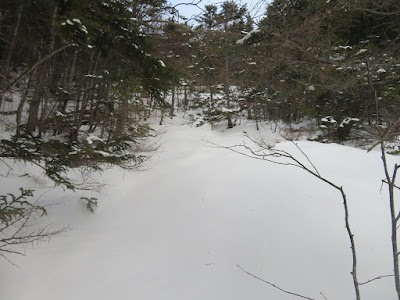 Back down through the spruces. 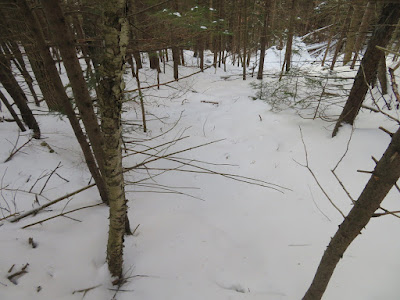 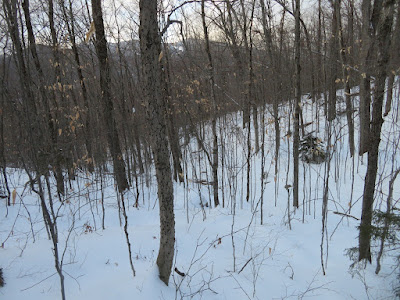 Best snowshoeing of the season, so far. 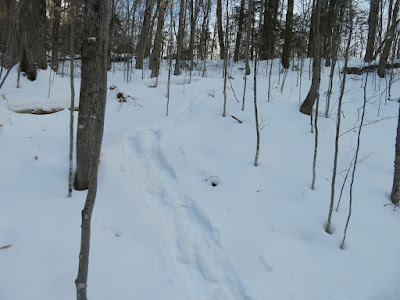 Neatest tree of the day. 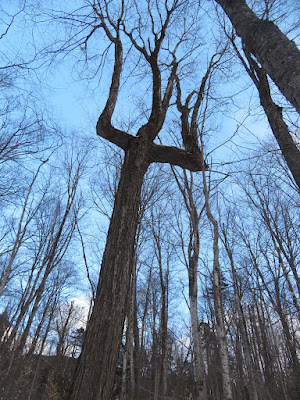 East Branch starting to freeze up. 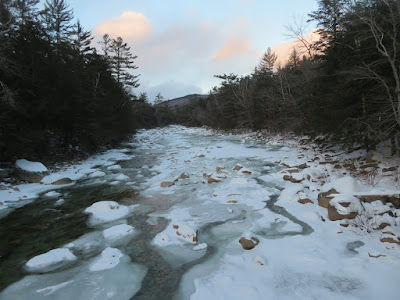 Zoom on the slide from the Kanc Highway bridge. 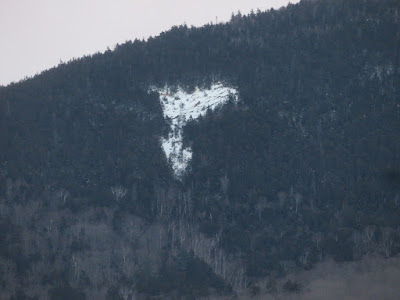