Continuing a series of visits to "neighborhood slides" near our home in Lincoln, I snowshoed up the old Osseo Trail to the last remaining open patch on the narrow slide that scarred the south face of Whaleback Mountain. The new snow from the previous day's storm made for a strenuous steep climb. 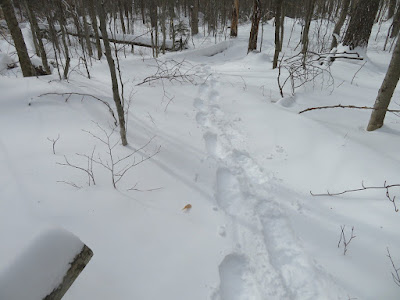 The "old" Osseo Trail was opened in 1905 by the North Woodstock Improvement Association and the AMC, as part of the Franconia Ridge Trail. It led over Osseo Peak (Whaleback Mountain) and then along a wooded ridge to Mt. Flume. It was officially abandoned in 1983 due to condominium construction but still sees some use today.
According to Frank O. Carpenter's 1890s Guide Book to the Franconia Notch and the Pemigewasset Valley, the name "Osseo Peak" was approved for this "striking, sharp, slide-scarred peak" by the AMC Committee on Nomenclature in 1890. Wrote Carpenter, "Osseo is an Indian name for 'Son of the Evening Star,' so named because of a bright star that rises above it, as seen from North Woodstock." At the time Carpenter wrote his guide, there was no trail to the peak, but logging roads could be followed along Clear Brook to its base. In 1898, the second edition of Carpenter's guidebook could be purchased for 35 cents. It can be viewed on Google Books:
https://play.google.com/books/reader?id=v3Ky0-iBatoC&pg=GBS.PP8&printsec=frontcover 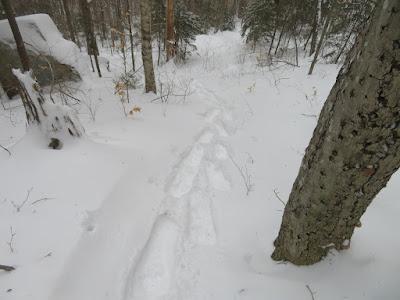 There was a partial track in the easy first mile, but from there up I was breaking trail through more than a foot of heavy powder. 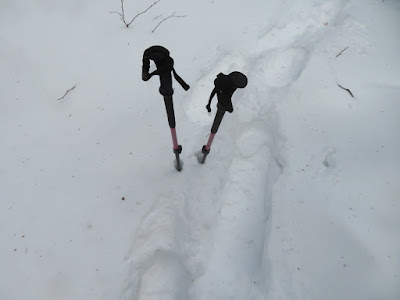 It took two hours to make the mostly relentless 1000-ft. climb to the slide. 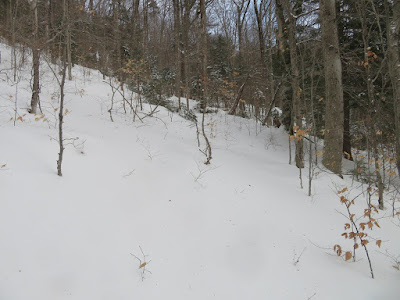 Looking back during one of many short rest stops. 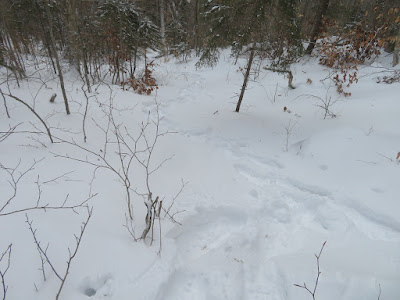 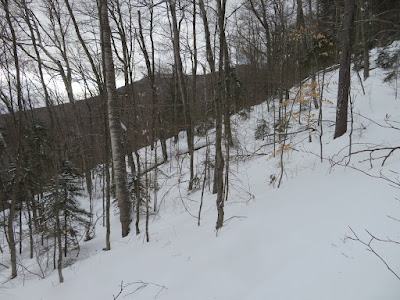 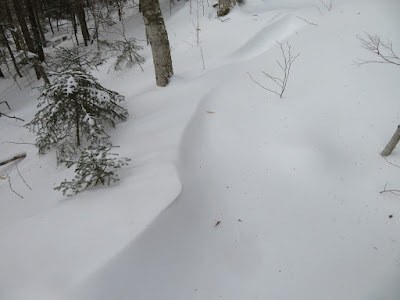 Winter beauty on the moderate section that approaches the slide on an old contouring logging road. 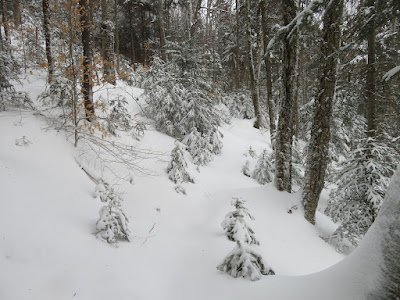 Heading up a short but steep bushwhack to the open slide patch. 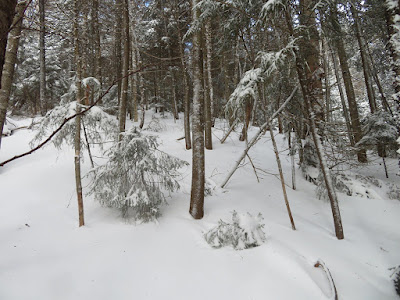 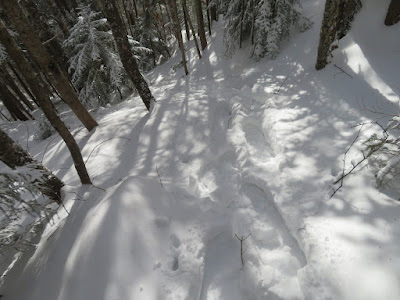 Emerging at the edge of the slide patch, elevation 2750 ft. My best guess is that this slide fell during the 1938 hurricane, at the same time as the slide on the east flank of nearby Big Coolidge Mountain. No mention of the slide was made in the AMC White Mountain Guide description for this trail until the 1946 edition, which read: "...the trail turns R into the hardwood growth and zigzags with increasing steepness for about 1/2 m., then climbs into an easy old road leading R across the big Osseo slide." I recall climbing up the narrow slide swath above here back in the 1990s, but it is now mostly treed-in. 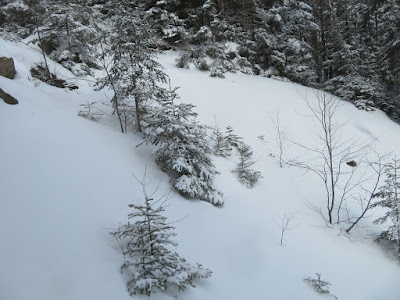 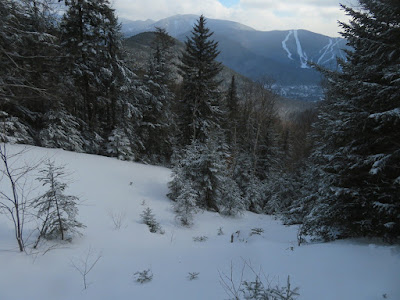 From the upper end of the open patch, a nice view of Scar Ridge and Mt. Osceola beyond the hump of "South Whaleback," which was once locally known as "Elephant Mountain." Guidebook author Frank O. Carpenter called it "Oweenee Ridge." The Osseo and Oweenee names came from Longfellow's poem, "Hiawatha." 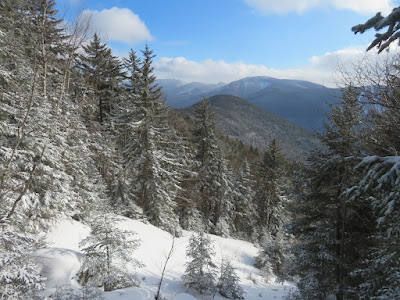 The view was worth the effort on this cold, windy day. 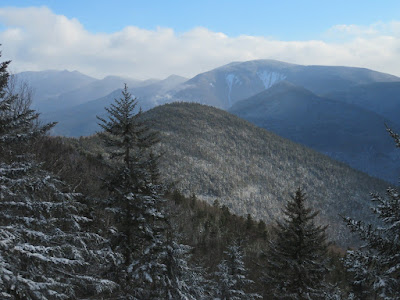 Scar Ridge looks rather ominous in the low-angle January light. 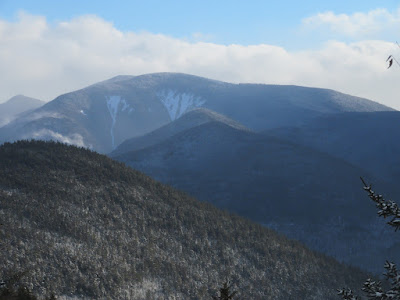 A particularly good angle on the long track of the eastern of Scar's NW slides, which I had visited the previous week. 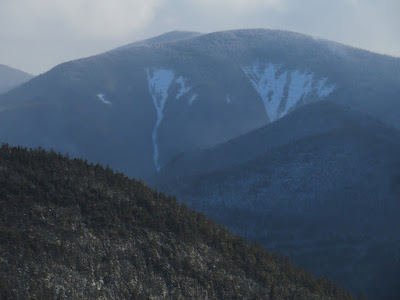 Snow plumes were blowing off the eastern Scar Ridge peaks and Mt. Osceola. Luckily this south-facing viewpoint was mostly protected from the wind, allowing for a half-hour stay. 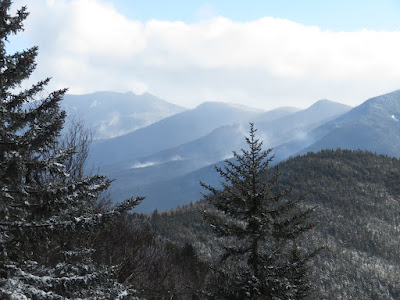 Heading back down the old road section. 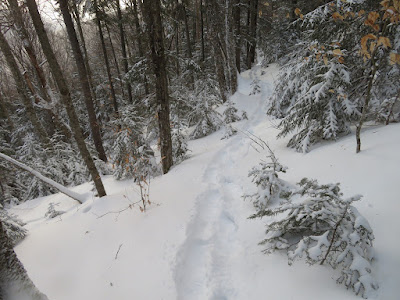 Descending towards the Loon ski trails. 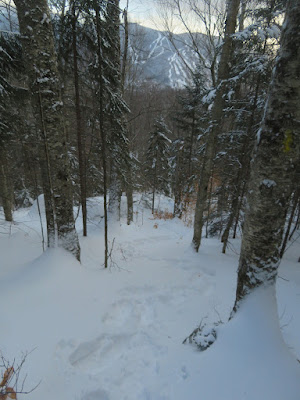 Nice angle of light on the tracks. 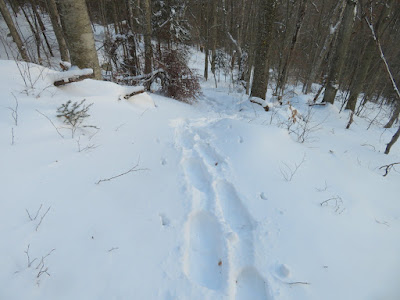 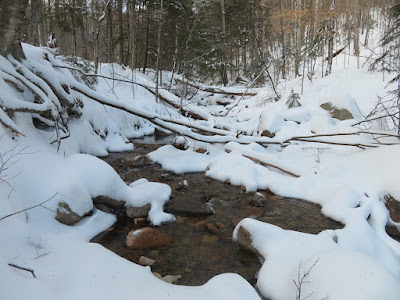 A cold dusk in the depth of winter. 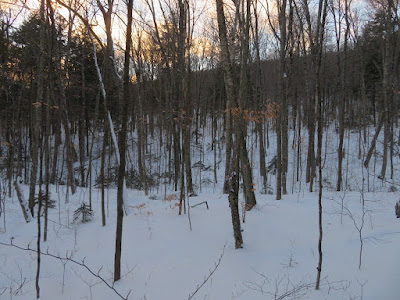