A day of trail work on the adopted trail of the AMC Four Thousand Footer Committee, with a late-day visit to a slide along the Square Ledge Trail.

The water level was down at the beaver pond along Oliverian Brook Trail. 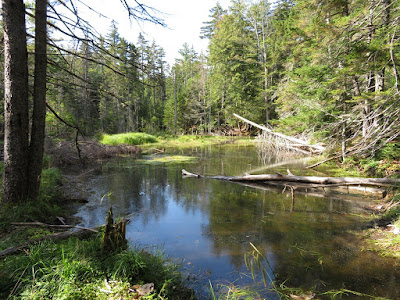 All was quiet along the grade of the Oliverian Brook branch of the Conway Lumber Company's Swift River Railroad (1906-1916). 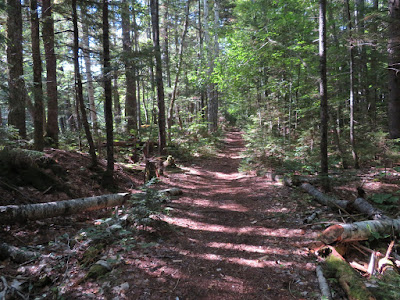 The first order of business was to try and erase messages written on two trail signs with a sharpie last weekend by an uninformed hiker (who has been identified and may be fined by the USFS for his actions). 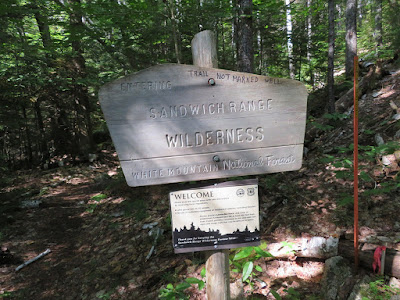 Coarse sandpaper, #60 grade, plus some elbow grease did the trick. 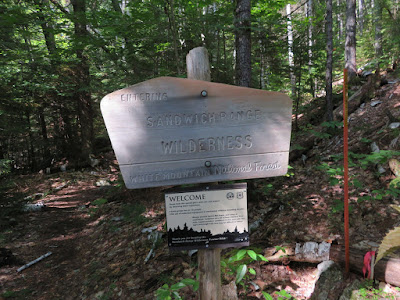 This one was worse. 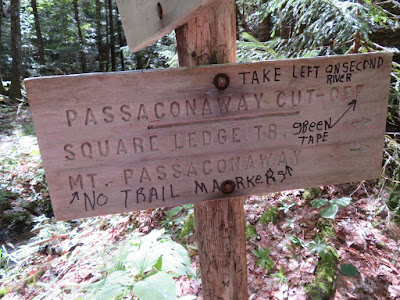 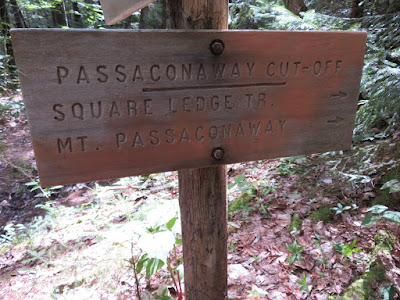 One of the nicest sections of Passaconaway Cutoff. 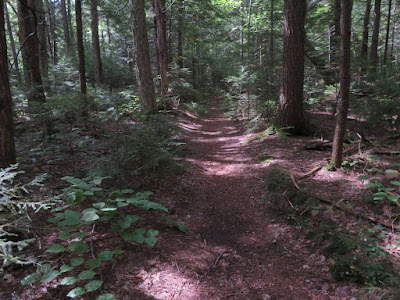 Low water made for an easy crossing of the west branch of Oliverian Brook. 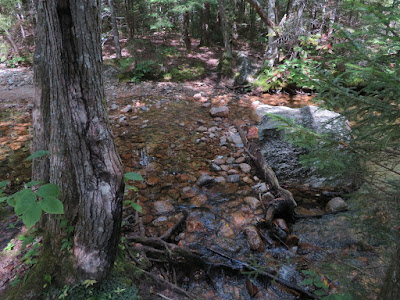 A half-mile farther a short herd path leads to another spot on the brook. A 1956 aerial photo shows that the runout from a 1938 slide on the east side of Mt. Passaconaway extended down beyond this point. 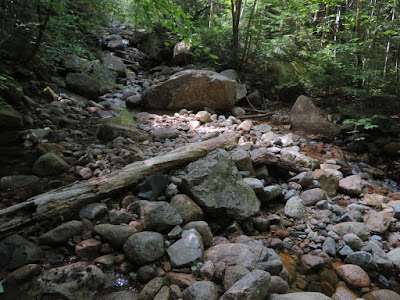 As reported by a hiker on Facebook, the sign defacer also marked the Cutoff - a trail that is not at all difficult to follow - with pieces of green tape. That hiker removed all but this one piece of tape -thank you! 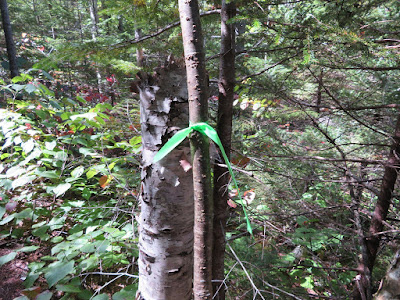 I spent several hours brushing along the length of the trail, mostly cutting back the ever-persistent hobblebush. Though it can be the bane of trail maintainers (and bushwhackers), hobblebush can also provide bursts of beauty. 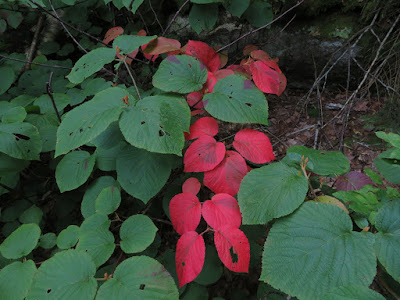 I'm always happy to reach this sign at the top of the Cutoff. 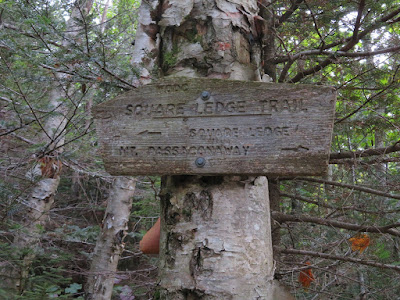 Sled runner on display along the Square Ledge Trail, near the site of a remote lumber camp of the Swift River Railroad. 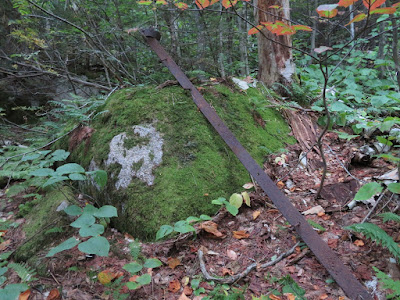 The Square Ledge Trail crosses the base of the slide on the steep north slope of Nanamocomuck Peak. This slide fell during the 1938 hurricane. 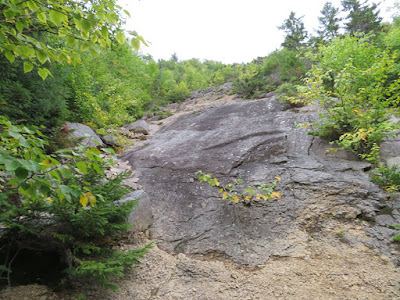 Views can be obtained with a short scramble up the slide, but caution is needed due to crumbling ledges and loose gravel. 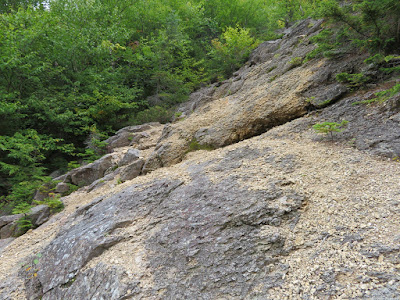 I climbed higher than usual to a couple of shelves with good viewing perches. 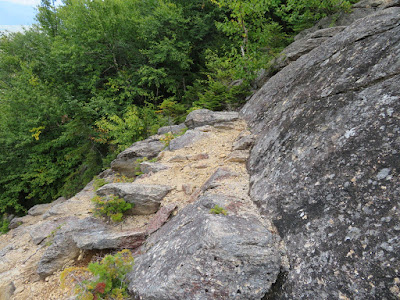 Though clouds had rolled in, there were still good views to the north. 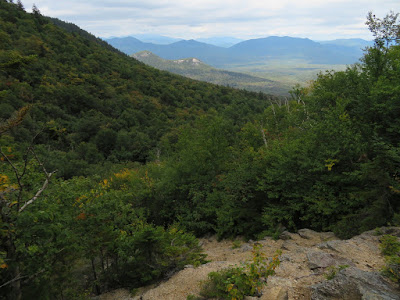 The last sun of the day illuminated Hedgehog Mountain and the East Ledges. 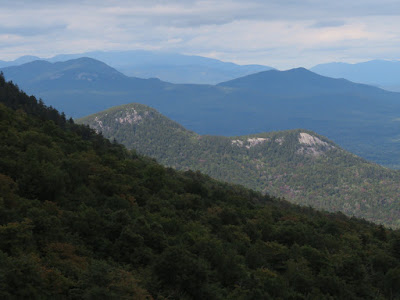 Looking up at the steep cone of Mt. Passaconaway. 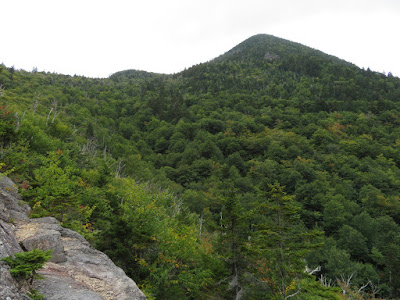 Scrubby trees have taken over the middle section of the slide. 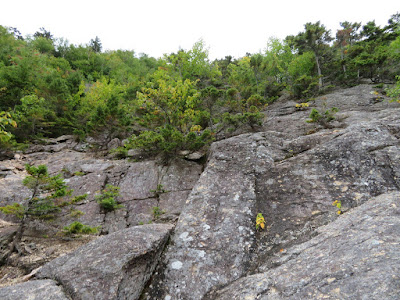 Looking down to the trail below. 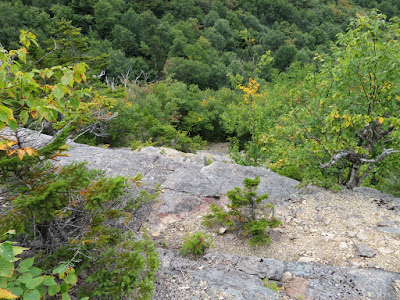 Not a bad place to hang out. 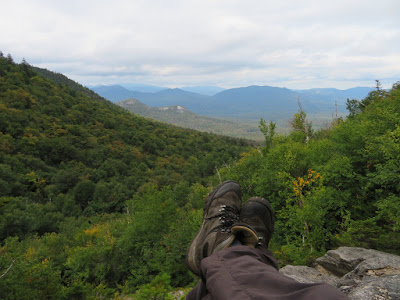 Above here the slide is very steep. 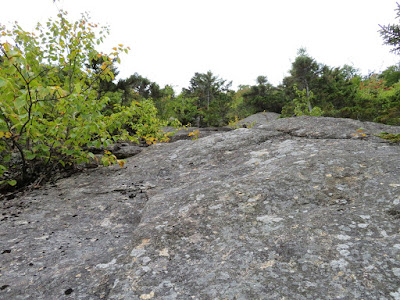 Yikes! During research for his 1958 dissertation on "Revegetation of Landslides in the White Mountains," Edward Flaccus measured an average slope of 35 degrees on this slide with a maximum slope of 39 degrees, a length of 250 yards, an average width of 20 yards, and an area of 1.0 acre, with 5,399 tons of debris moved. 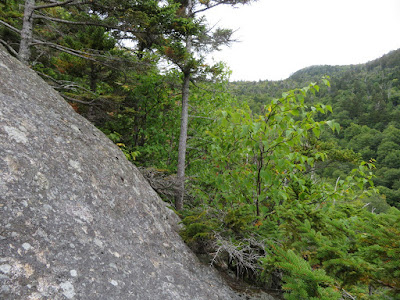 Peaceful evening scene at the Cutoff's crossing of the west branch. It must be a quiet season: in eight miles and nine hours spent along this northern approach to Mt. Passaconaway, I did not encounter a single hiker. 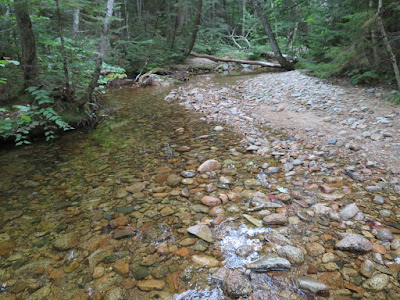