On a gray day my brother Drew and I took a leisurely ramble to this lovely pond in the shadow of Sandwich Dome's Black Mountain. Our route started on the Sandwich Notch Road (overall in decent shape from the Rt. 49 side, but best driven with a vehicle with reasonably high clearance as there are two particularly rough spots) and followed the Guinea Pond Trail and Black Mountain Pond Trail. About 8 1/2 miles round trip with a couple of side jaunts.

There was some early red maple color along the Guinea Pond Trail. 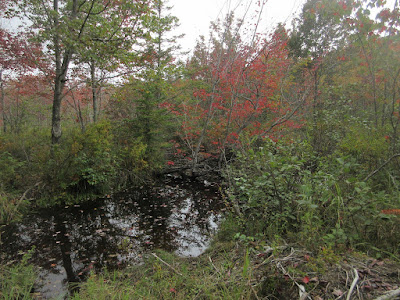 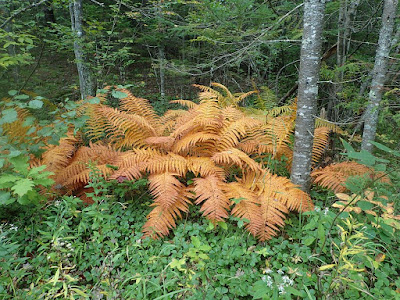 The wetlands extend for a long distance along the Beebe River. 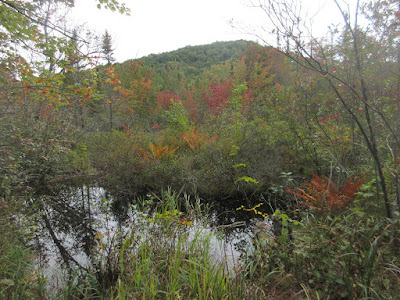 View across to a fog-shrouded spur of Sandwich Dome. 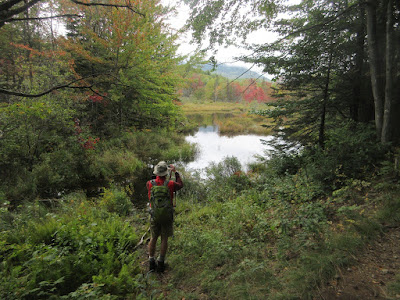 The Black Mountain Pond Trail leads into a wild and remote forested area that was added to the Sandwich Range Wilderness in 2006. (Photo by Drew Smith) 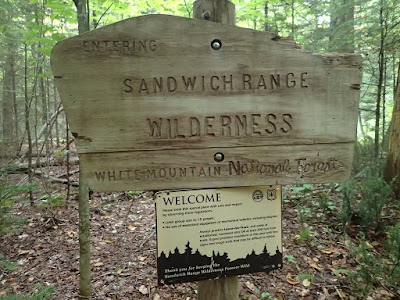 There was a colony of this vivid mushroom alongside the Black Mountain Pond Trail. 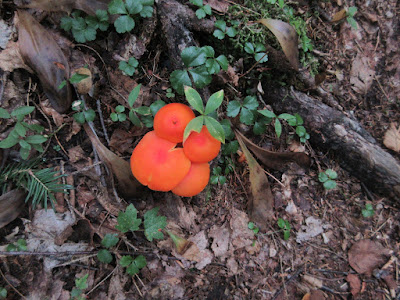 We followed a moose path out to the edge of a vast wetland on the west side of Guinea Pond. 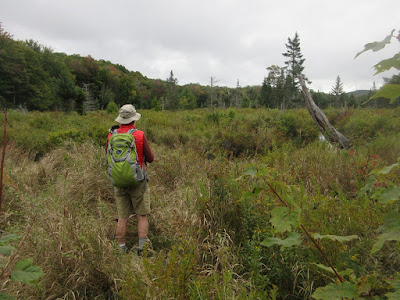 Beaver dam and pond at a trail crossing of the Beebe River. 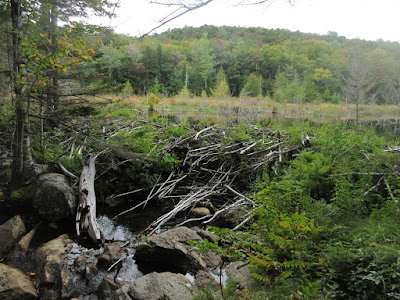 Trailside meadow at the far end of the beaver pond. The wetlands add a lot of interest to this hike. 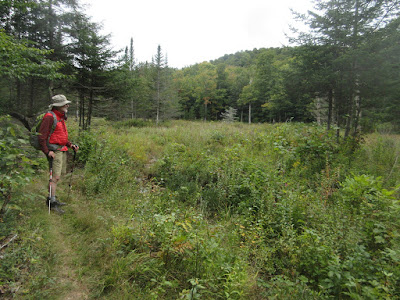 Pool and mini-cascade on the Beebe River. 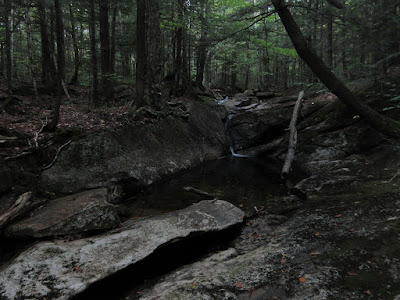 Tis the season for a splendid variety of mushrooms. (Photo by Drew Smith) 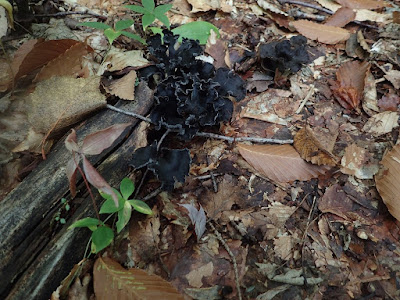 I made a short bushwhack down from the trail to yet another beaver meadow. A wonderful area! 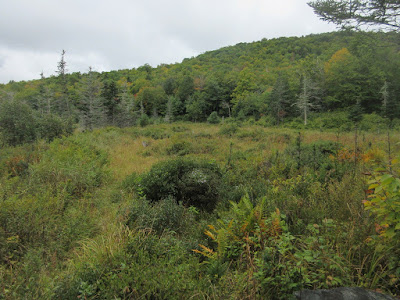 Black Mountain Pond was not accessible by maintained trail until the early 1950s.
In 1943-44 George “Jack” Mead, who had worked on the Algonquin Trail as a youth in 1905 and was a longtime Sandwich Notch enthusiast, purchased 2,443 acres in the Sandwich Notch/Black Mountain area from the Draper Corporation to forestall a major logging operation. Jack Mead passed away in 1949, and the next year his wife, Cary Hoge Mead, donated the large tract to the Forest Service for inclusion in the WMNF. Within the next two years a new route called the Mead Trail was opened by the WMNF, leading from the summit of Mount Israel down across the bed of the old Beebe River Logging Railroad (which had recently become the Guinea Pond Trail), then up along the outlet brook (Beebe River) to Black Mountain Pond, where a shelter was built on the N shore. At that time the trail followed the W bank of the brook, then crossed to the E side and followed it to the foot of Mary Cary Falls, then recrossed the brook above the falls (where a side trail led to the top of the falls) before making the final climb to the pond. The trail leads through a fine variety of woods, including spruce forest along the final approach to the pond. 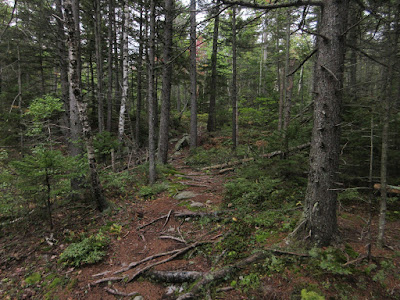 Camping is restricted at the pond due to overuse and abuse in the past. There are two dirt tentpads in a designated area on a bluff above the pond. 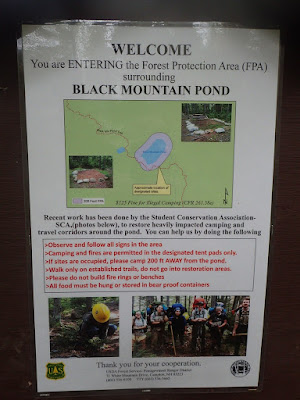 Several revegetation areas are posted above the shore. 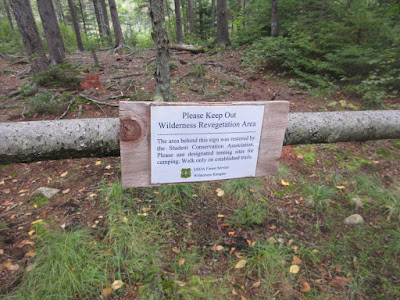 A designated side path leads down to a fine ledge on the SE shore. 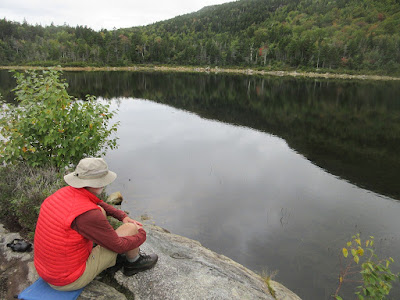 The pond is a crystal-clear beauty. 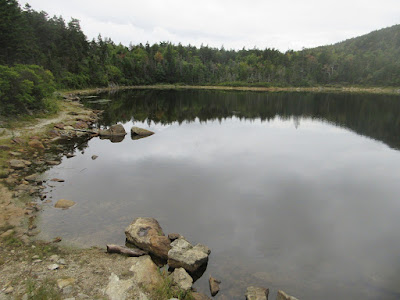 The ledgy mass of Black Mountain rises close by to the north. 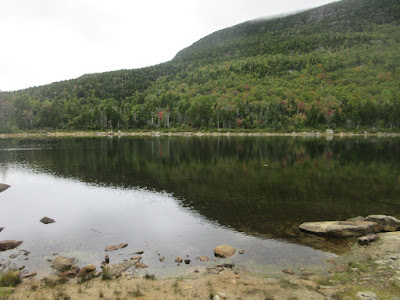 The pond's outlet is the origin of the Beebe River. 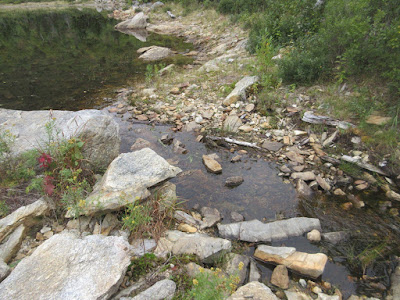 Lance-leaved goldenrod grows among rocks on the exposed shoreline. 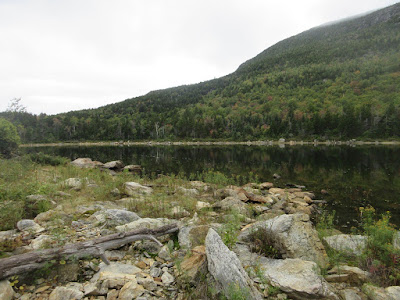 Looking towards the east end of the pond. The original trail route continued around the N and E sides of the pond past a shelter, climbed a ridge to an outlook, then zigzagged “to the top of some splendid cliffs which are followed W for some distance” and ascended a steep pitch to meet the Algonquin Trail on the crest of Black Mountain. In the mid-1960s the trail was relocated to pass around the S shore and a new shelter was built there; just beyond the pond the trail passed a beaver pond and a “small stand of virgin spruce.” In 1996 the shelter was removed due to overuse, and camping restrictions were enacted for the area close to the pond; later two tent pads were built on a knoll above the pond by the Squam Lakes Association, which maintains the Black Mountain Pond Trail. 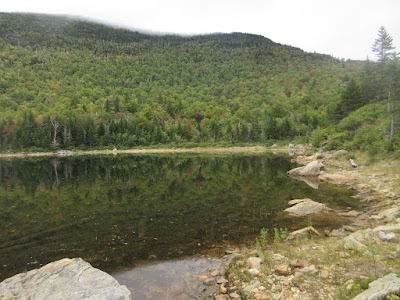 Mountain cranberry grows along the fringe of the ledge. 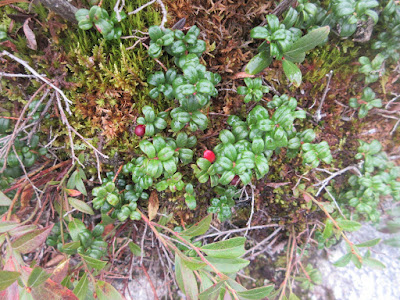 Drew takes in the scene before we head back down. It was pin-drop quiet during our hour-long visit. 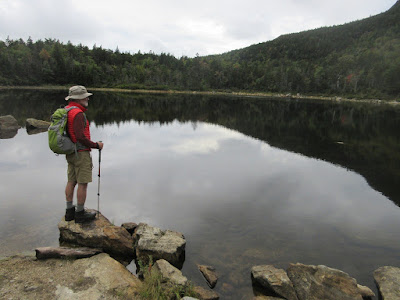 A side trail leads to Mary Cary Falls, an impressive rock formation even with a minimal flow of water. 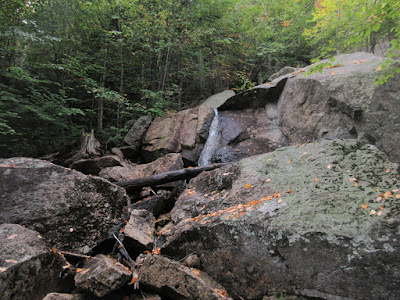 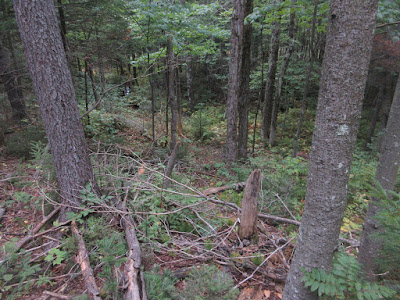 Below the pond, as seen here, the trail's grades are easy to moderate. Above the pond, ascending to Black Mountain, the trail is one of the steepest and roughest in the mountains. 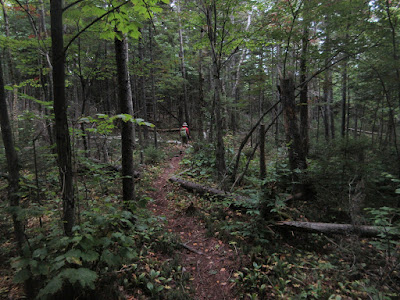 An impressive rock waterbar. The trail is well-maintained by the Squam Lakes Association. Over the years the SLA crew has installed numerous rock steps in wet areas along the trail. 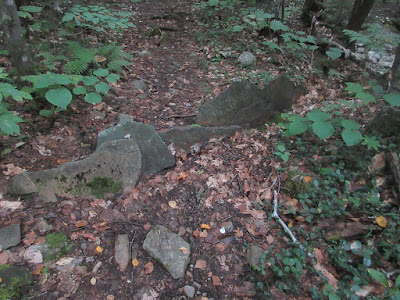 These trees have woven a tangled web. 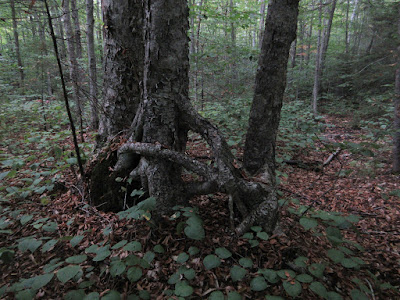 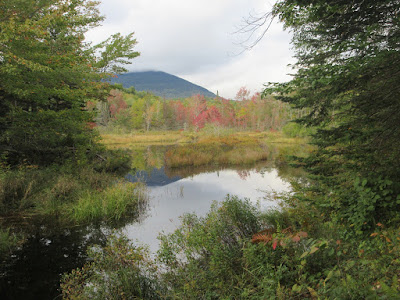