A morning hike into Upper Greeley Pond from the Kanc and then a bushwhack partway up alongside the old (1892) slide on the steep slope of East Osceola. 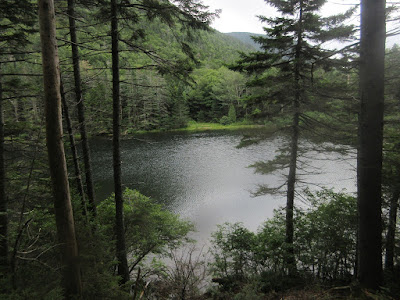 Looking across the pond to the wide eastern front of East Osceola. 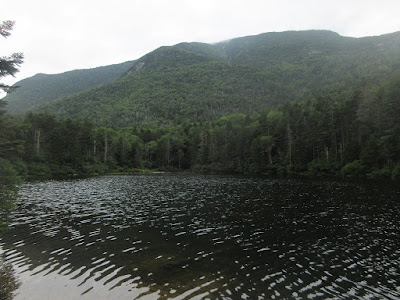 The cliffs on the NE spur of East Osceola. 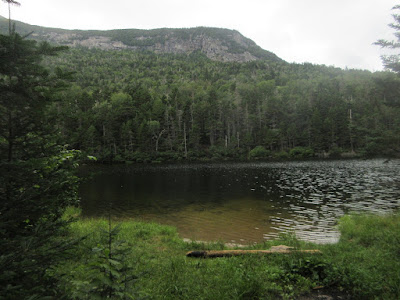 From the trail I followed the rubbly runout/brookbed to the base of the slide proper. 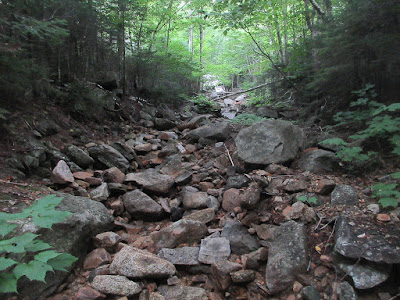 A cascade at the base of the slide. No way I was going to try and climb those greasy ledges - time to take to the woods beside the slide. 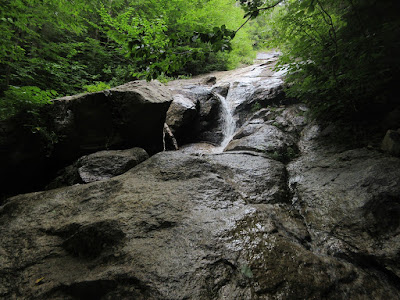 Looking up at the widest part of the slide. This slide was triggered on an undetermined date in 1892 (or possibly 1891). Probably the first person to climb it was William Morse Cole, who scaled it in 1893 and wrote an article about it, "Alone on Osceola," for New England Monthly magazine in 1895. 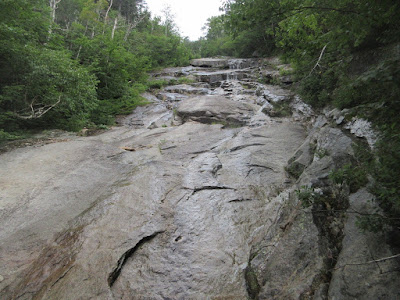 The new slide presented an enticing challenge for Cole: “…The fact that human foot had never trod those newly bared ledges served as an invitation.” One October day he hiked in to Upper Greeley Pond and scouted his route from a log raft out on the water, noting “the white line of the slide.” 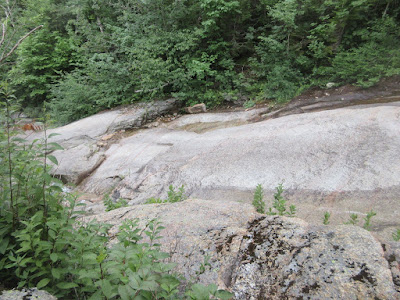 Cole started up the track of the slide, clambering over torn and twisted trees and then loose debris and disintegrated rock. On the slide proper he found “bed rock nearly as smooth and washed as clean as a marble floor.” 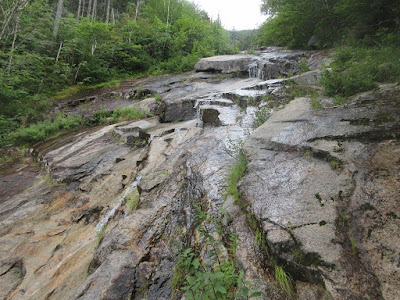 Higher up the going became quite treacherous. Cole had several narrow escapes from starting his own new slide. He tried taking to the edge of the slide, but eventually was obliged to make his way up the stream channel in the center. The very steep and smooth upper ledges were especially challenging: “Now and then I came to a pitch so sharp and smooth that I could not cling, even though I lay flat and pressed hard with both feet and hands.” 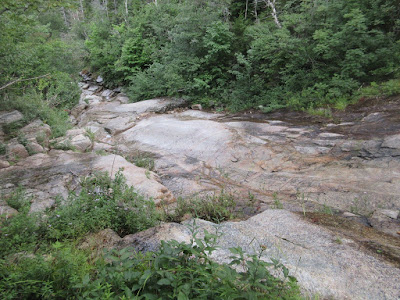 I thought of Cole's long-ago adventure as I pushed through the dense woods beside the slide. From this spot I could see a distant profile of the K1 Cliff on the SW side of Mt. Kancamagus. The Tripyramids, visible from this spot, were socked in. 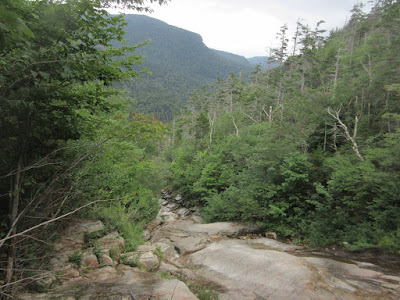 I was only out for the morning, so this was as high as I went, to a turn in the slide at 2600 ft. I've been here in winter also, but have never gone higher. The full ascent of the slide is a classic winter mountaineering route, with a mix of ice bulges and snow, and in good snow years the slide is skied by backcountry aficionados. From 3000 ft. up the Mt. Osceola Trail parallels the upper right fork of the slide. It passes close by a huge rock slab on it at 3350 ft. and crosses it near its top.at 3700 ft., where you get the view down to Upper Greeley Pond. The left fork of the slide fell anew in the 1950s and started higher up,  with two additional forks near the top, both of them reaching 3900 ft. The left fork of the main slide -the one farther from the trail - is the one that is occasionally skied. 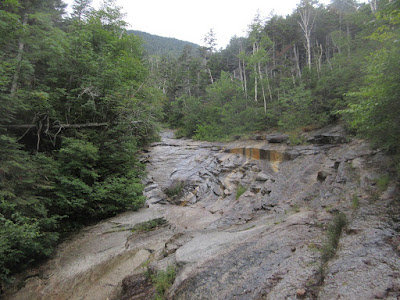 The same spot in a lean snow winter. 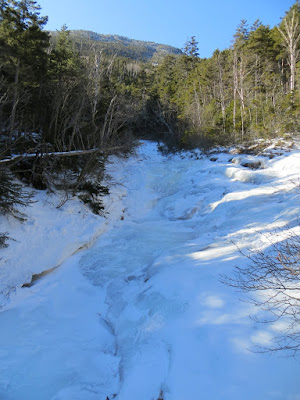 The slope levels briefly at this spot, permitting safe access to the ledges in the middle of the slide. Here there's a vista across to the western knob of Mt. Kancamagus and the K2 Cliff. 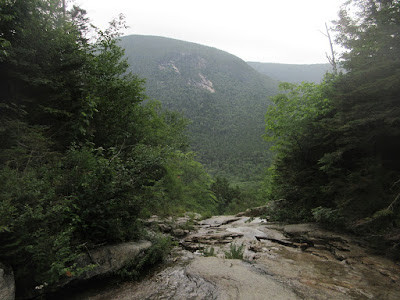 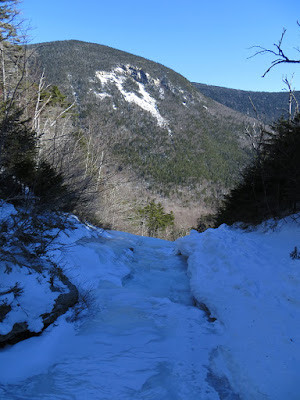 Meadowsweet blooming on the slide. 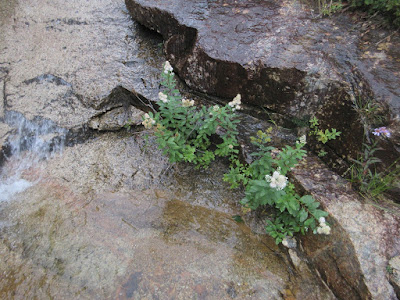 Interesting pattern on the ledges. As for William Morse Cole in 1893, inspired by the expanding mountain views, he pushed on to the top of the slide and continued in rough terrain to the East Peak (then trailless), and then along the ridgecrest to the ledgy summit of Osceola, where he spent a moonlit night before descending by trail the next morning to Waterville Valley. 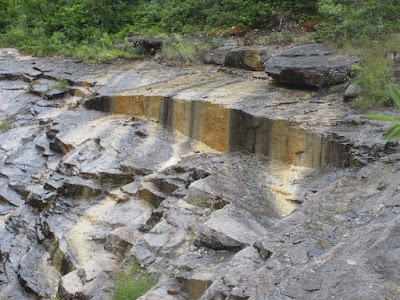 A snapshot from the 1925 revision of the Arthur L. Goodrich map of Waterville Valley, showing the 1892 slide near Upper Greeley Pond, and also the 1897 slide that come down to Lower Greeley Pond. Note also a short-lived trail to the K2 Cliff on Mt. Kancamagus. 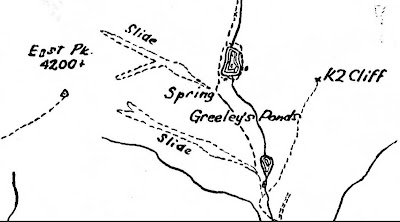