The mellow hike up to Burnt Knob (3180 ft.) on the northern part of the Escarpment Trail is one of the best moderate hikes in the Catskills, with three fine viewpoints, each with a unique perspective on the surrounding landscape. We had a beautiful warm, sunny spring day in store for us, and I could think of no better place to spend it.

We started from the trailhead at the end of Big Hollow Road and headed up the north side of the Black Dome Range Trail. 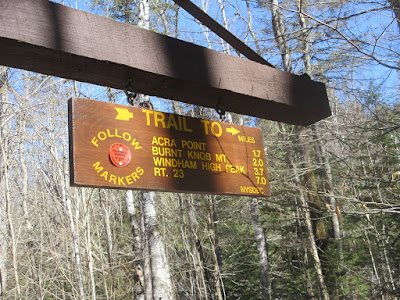 There was some ice and old snow in the hemlock forest on the lower slope. 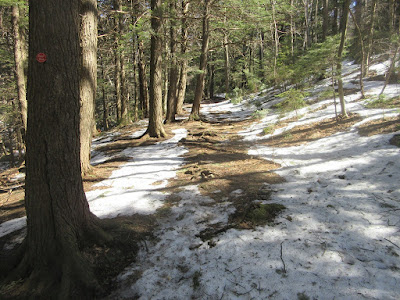 Once into the open hardwoods, the snow mostly disappeared. There were a number of large black cherries in the hardwood mix. 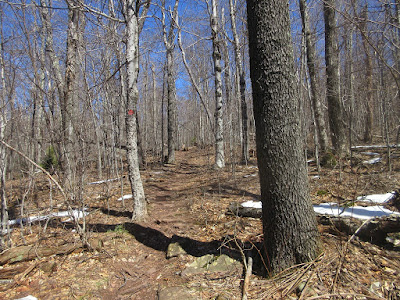 Rugged terrain along the Escarpment Trail as we climbed towards Burnt Knob. 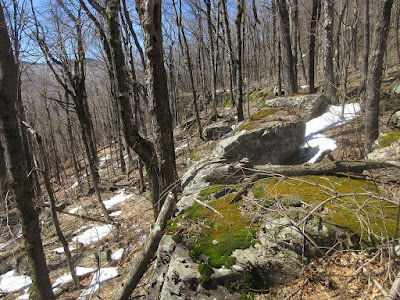 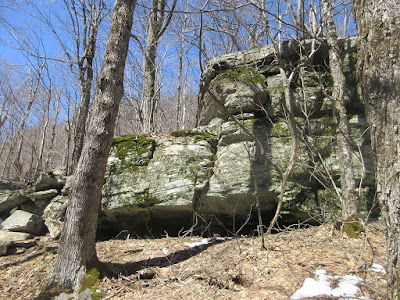 Carol works her way up through a ledge scramble. Above here, where the trail makes a steep switchback out to the north, we had to negotiate a steep sidehill of old firmly packed snow. This entailed some vigorous step-kicking. 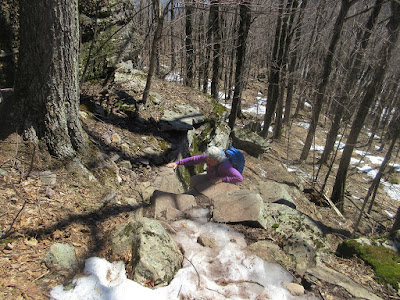 At the top of the climb the trail levels, and soon a side path brought us down to one of our favorite Catskill spots, looking across Big Hollow to the three peaks of the Blackhead Range: Blackhead, Black Dome and Thomas Cole. 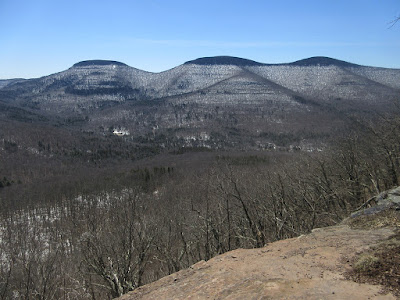 Blackhead Mountain, with the peak called Arizona peering over on the left. 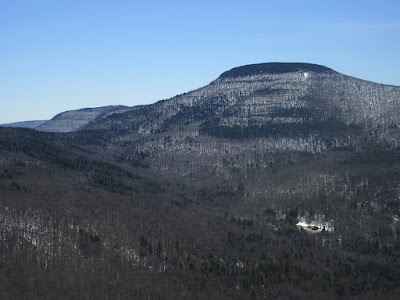 Looking east to Acra Point, another viewpoint along the Escarpment Trail. 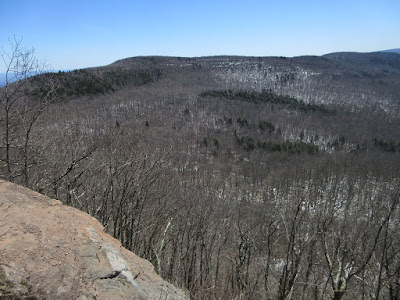 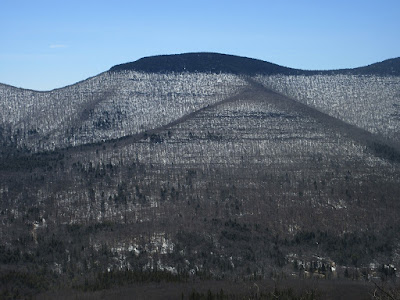 Thomas Cole Mountain, with its western spur, Camel's Hump, on the right. 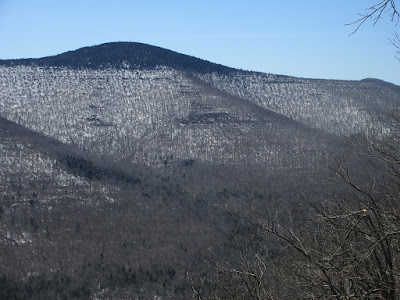 We headed NW along the Escarpment Trail, enjoying the bare ground walking. 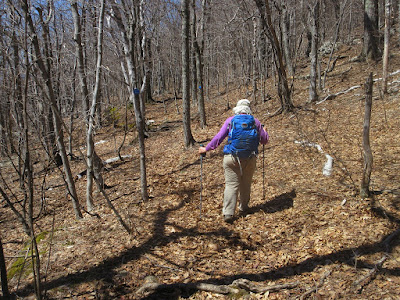 We encountered some spring snow in a broad col west of Burnt Knob. 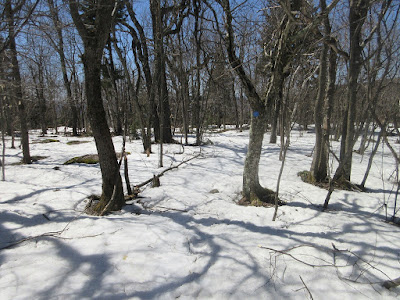 The second view ledge offered a vast view to the NE. With 90+ mile visibility, we could see distant peaks such as Equinox and Glastenbury Mountains in southern Vermont and Crane and Puffer Mountains in the Adirondacks. 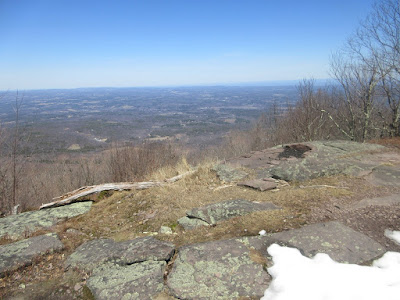 Windham High Peak loomed close by to the NW. 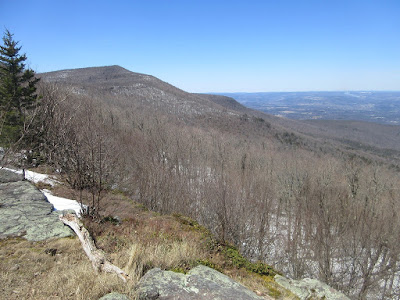 Carol takes it all in. While we were here, she downloaded the peakfinder.org app to her iPhone, which was a great help in distant peak ID. 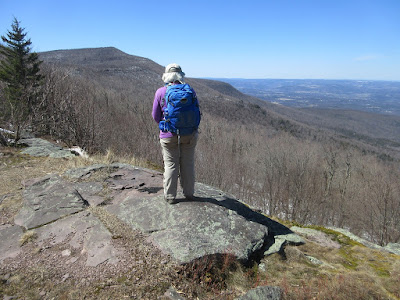 After a ridge traverse and short climb, we arrived at the third and final vantage point for the day - a ledge perch with a wide SW view. 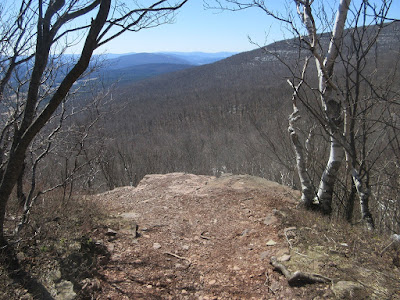 Another angle on Windham High Peak. 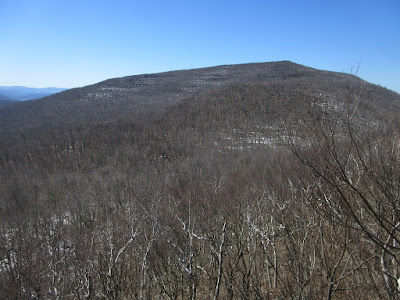 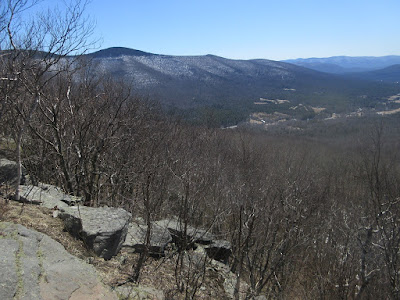 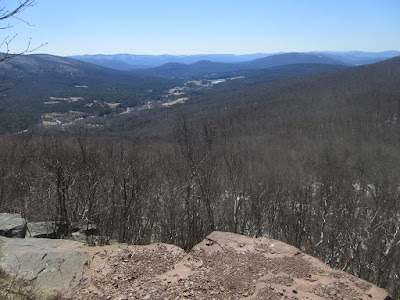 Heading back along the Escarpment Trail. 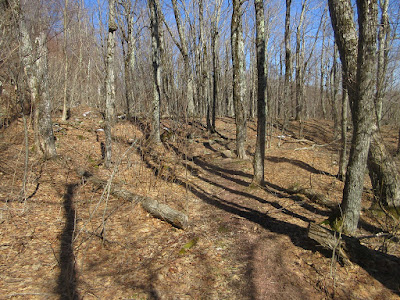 The Blackheads in late afternoon. 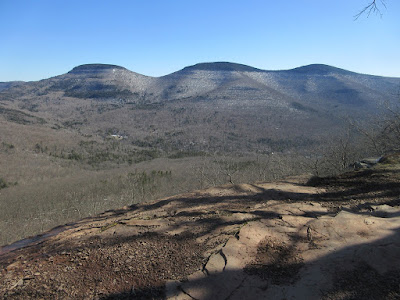 Through the course of our 4 1/2 mile hike, I tossed perhaps a couple of hundred branches and limbs off the trail. Many appeared to have fallen during a recent ice storm. There were a few larger blowdowns as well. 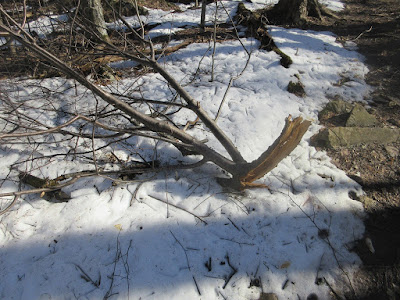 Along the trail was a small cascade on a tributary of the Batavia Kill, a nice scene at the close of a fine spring day in the Catskills. 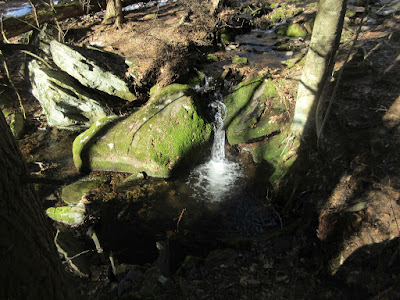