With just the afternoon available for a hike, I returned to the Smarts Brook area for a 5-mile trail-and-bushwhack loop to three sets of ledges on the south side of Bald Knob. It was typical early December - leaden grey skies and an inch or so of slippery wet snow above 1500 ft. 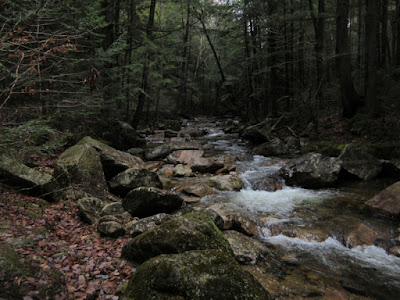 From the Yellow Jacket Trail I bushwhacked up along a small tributary brook, a different stream than the one I followed on a recent trip to Bald Knob itself. 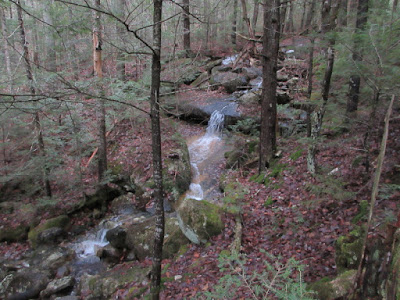 Farther up, the stream shrank to a rivulet as I tracked it through open hardwoods. 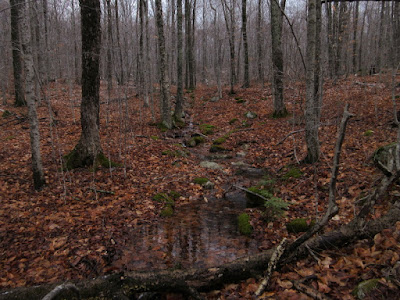 The first and lower ledges were broad and gentle. This one bore a rich carpet of lichen and moss. I stepped on bare rock patches to avoid trampling these. 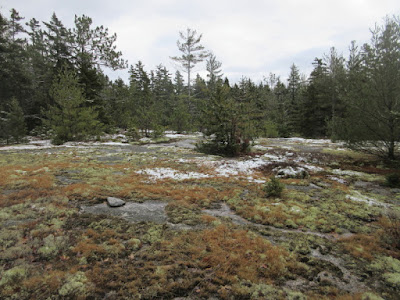 Here I stumbled upon a well-worn bootleg trail, one of several in the lower Smarts Brook area. 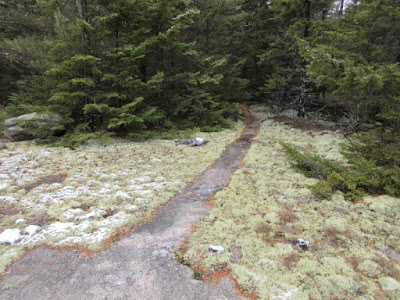 The lower of the two Black Mountains on the SW ridge of Sandwich Dome peers over the trees. 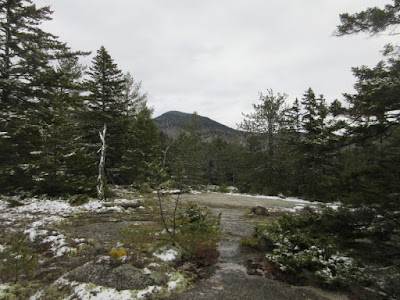 This broad expanse reminded me of the Blueberry Ledges on the lower slope of Mount Whiteface. The first time I visited here, with Cath Goodwin in March 1996, this opening was a place of refuge for us from strong winds that had dropped a large yellow birch in the woods on a spot we had just crossed. Here we were safe from any falling trees, until we wisely decided to curtail our bushwhack and head for home. 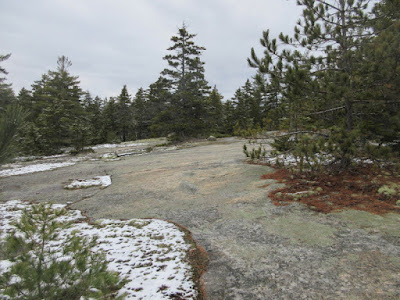 I headed up a minor ridge towards the next set of ledges, and had my first tussle of the season with snow-laden spruce. As a water park ad says, get set to get wet! 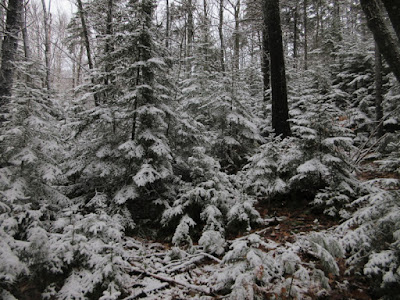 Snow had plastered the hardwoods too, and the footing was slippery. 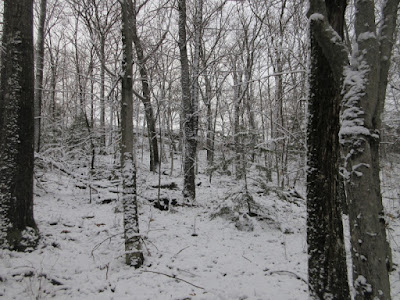 Arriving at the base of the next ledge. 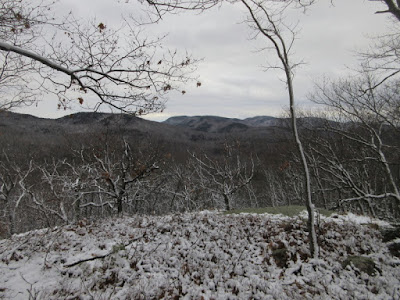 This one is a long oak-fringed ramp of granite. 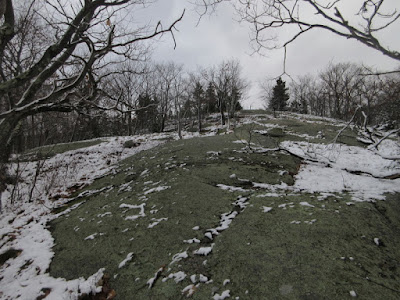 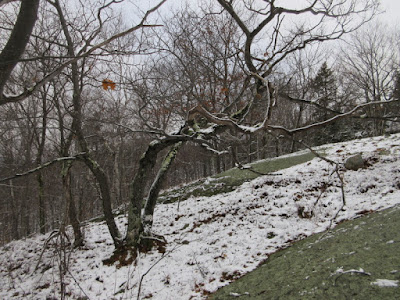 An unusual shape for this poop deposited by a local resident. 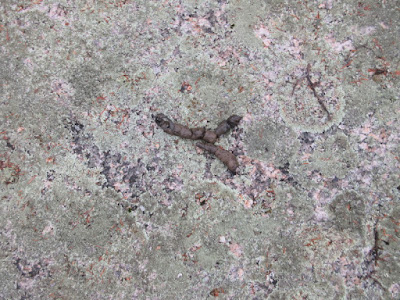 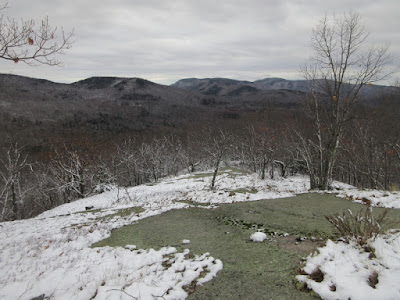 The lower Black Mountain and its spur. 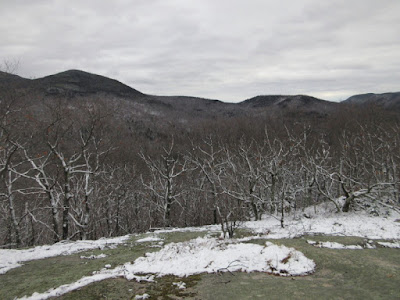 The lower and upper Black Mountains; the upper is traversed by the Algonquin Trail. 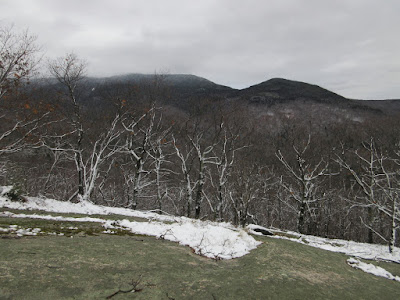 A glimpse of Sachem Peak up the ridge. 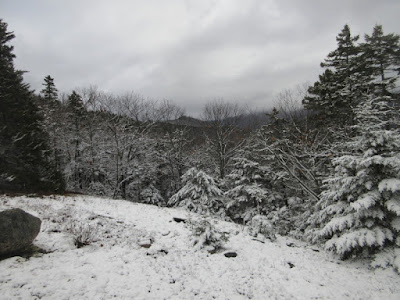 The boulder on this viewless upper ledge can be seen on the latest Google Earth image. 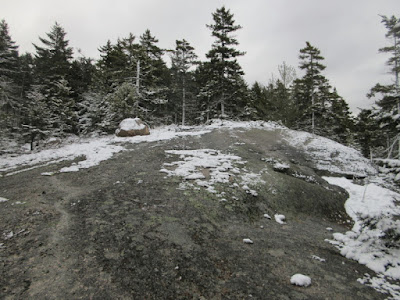 The third ledge area of the day was atop the prominent southern spur of Bald Knob, with a good view of the Campton Range. I had been to this spot earlier in the week on the way down from Bald Knob. 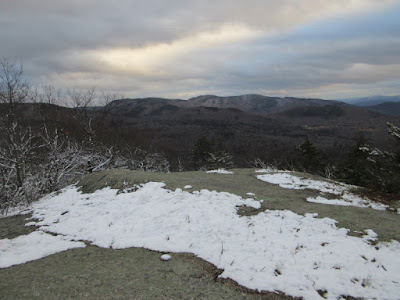 From the back side of the ledge there was a look up at the rough flank of Bald Knob. 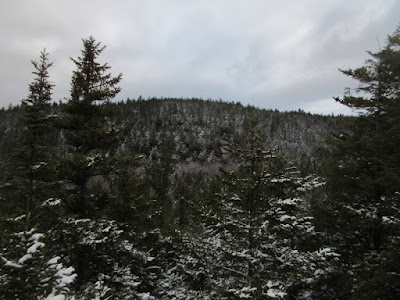 Here also was a neat view of Welch & Dickey Mountains beyond the steep nose of Bald Knob. 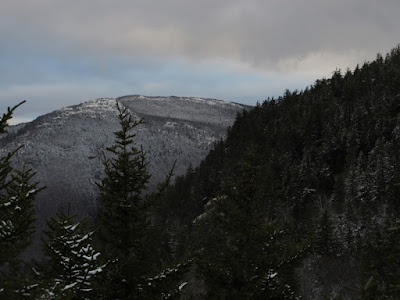 Twenty years ago another opening offered a lovely view up the Smarts Brook valley all the way to Sandwich Dome. But two decades of tree growth have almost completely obscured this vista. The best I could muster was this peek at the flank of the upper Black Mountain, obtained only by holding a branch down with a ski pole. But there are still views a-plenty to be found in the Bald Knob area. 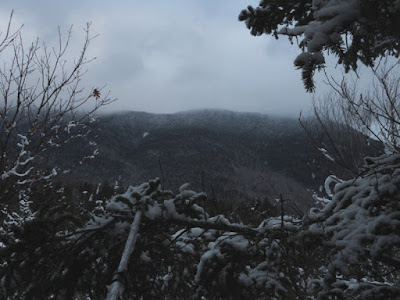