With a late morning start on this chilly gray day, I opted for a bushwhack to 2300-ft. Bald Knob, the westernmost peak on Sandwich Mountain's Acteon Ridge. I had been to this ledgy little peak back in 2006 on a traverse of Acteon Ridge with Keith D'Alessandro, but on that trip we were running late and couldn't spend much time on the summit. It seemed like a good time for a return visit, via a new route.

Bald Knob is prominent in the view below taken from a ledge on Welch Mountain. 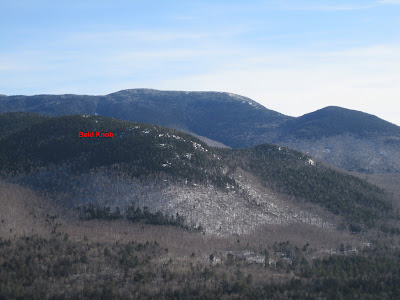 I walked part of the Pine Flat Trail on the approach, which offers interesting views of rock walls and a gorge along Smarts Brook. 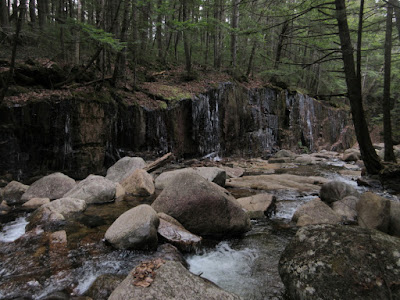 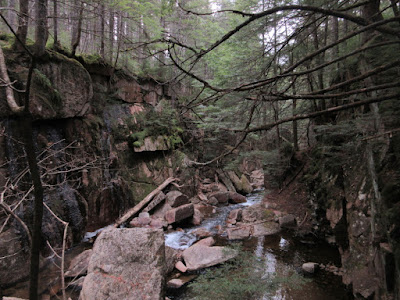 I was surprised to find a path of sorts along the first part of the bushwhack route, starting from the Yellow Jacket Trail. There was a unique directional marking where it turned away from the direction I was going. 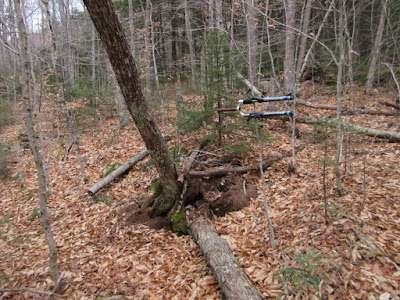 A small brook was my companion as I climbed towards the col on the south side of Bald Knob. 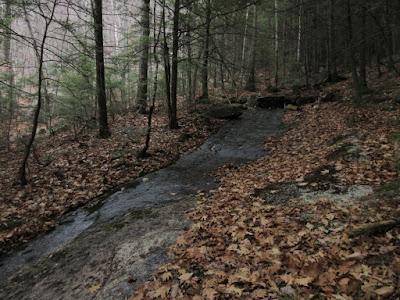 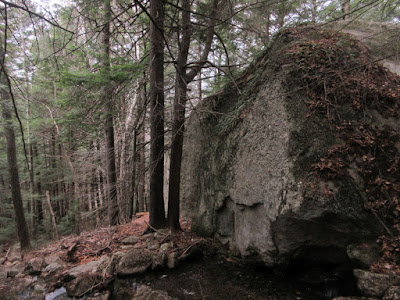 Much of the climb was through a wonderfully open hemlock forest with good footing and virtually no undergrowth. 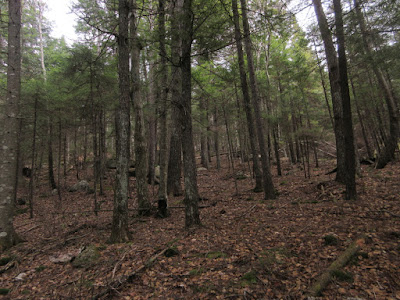 The climb was amply steep in places. 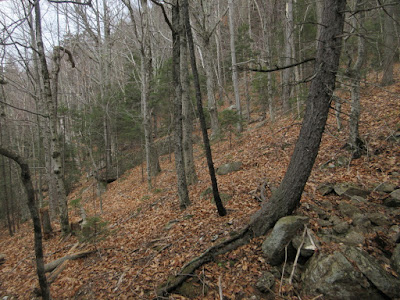 One of several cliffs lining the col on the south side of Bald Knob. This one had a climbing sling on it, and some later internet research revealed that the flank of Bald Knob has numerous named rock-climbing routes on boulders and cliffs. 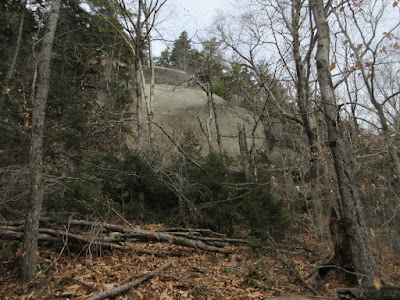 A fine open hardwood glade in the col. 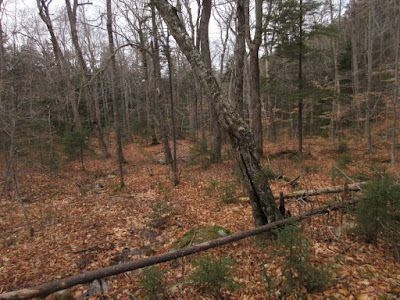 When Keith and I descended from Bald Knob in 2006, we were cliffed out partway down and had to backtrack up and across. So today I took a more roundabout route to the top on moderate terrain and eventually reached the summit, marked by a small cairn. 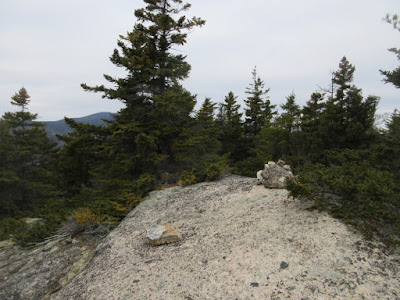 Expanses of ledge adorn much of the summit area. When wandering around checking out the views, I took care to avoid trampling the lichens that cover parts of the bedrock. 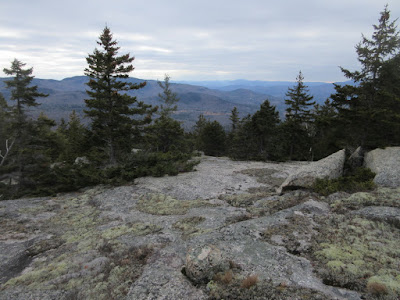 Looking towards the Campton Range on the south side of Sandwich Notch. 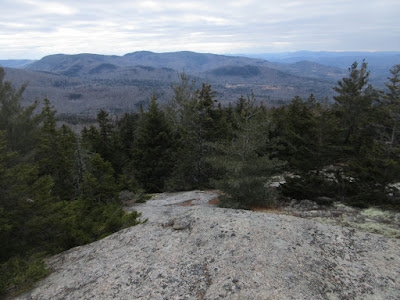 A neat place to hang out for a while, even on a raw grey day. 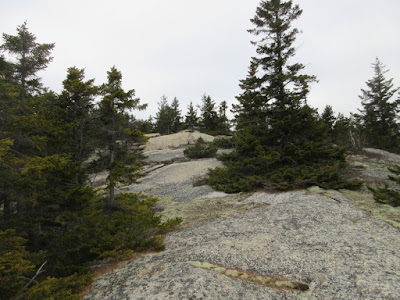 A ledge near the summit opens a good view of Welch and Dickey Mountains, with Cone Mountain behind on the left. 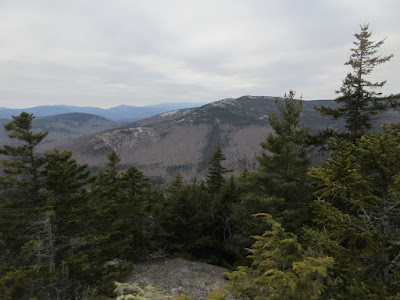 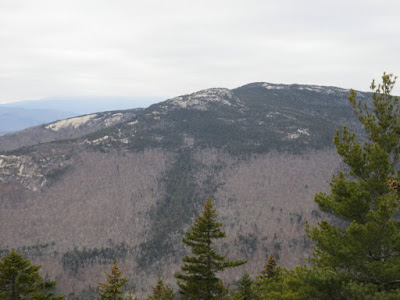 A peek at Middle and South Tripyramid. 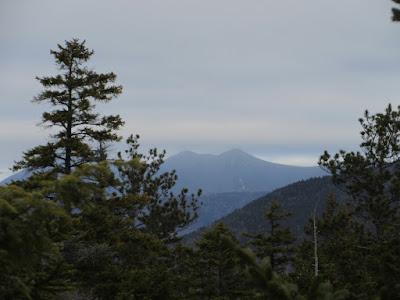 The high peaks of Sandwich Mountain: Jennings Peak, the main summit, and the higher of the two Black Mountains. 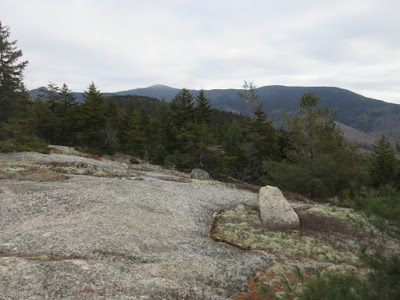 Jennings Peak, perhaps the best of the several viewpoints on Sandwich Mountain. 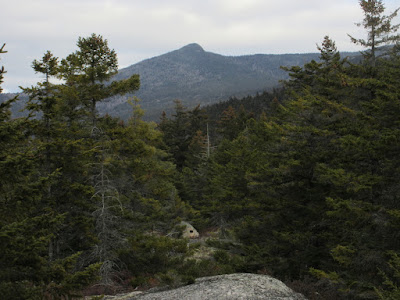 This bearing tree may mark the westernmost corner of the Sandwich Range Wilderness. 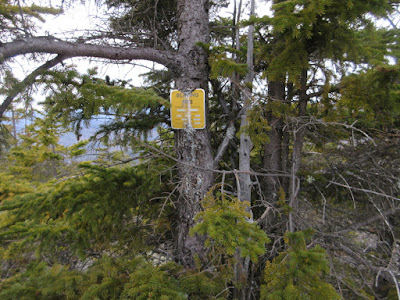 The massive sprawl of the two Black Mountains on Sandwich Mountain's southwest ridge. 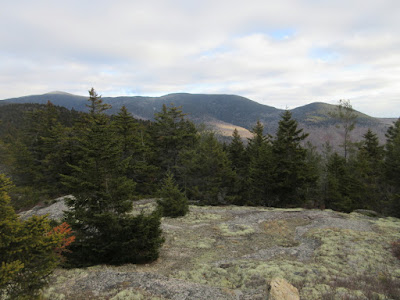 Back down to the hardwood col. 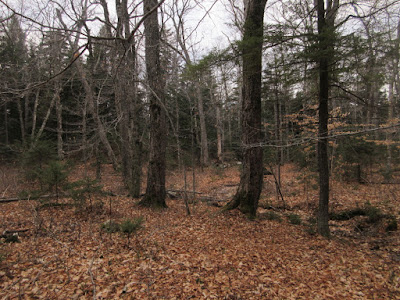 The headwaters of the little stream. 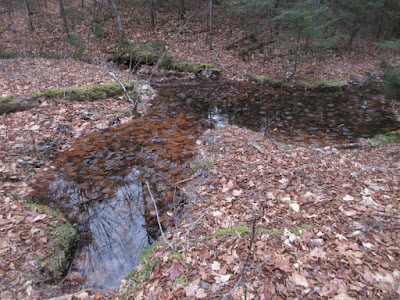 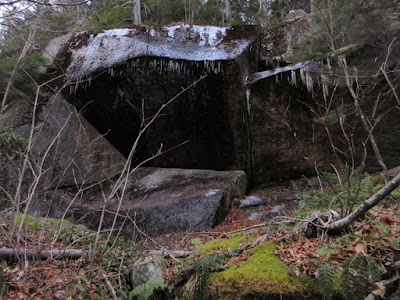 A side view of the fanged overhang. 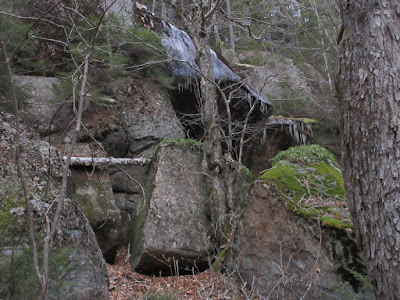 On the way down I made a side trip to a big ledge on the southern spur of Bald Knob. A great area to explore! 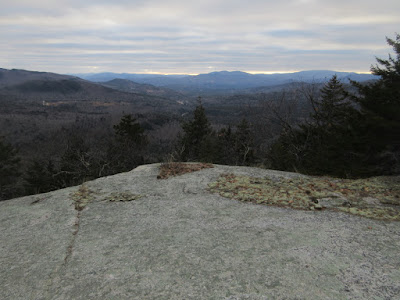