On a chilly fall day I joined my friends Harry and Barb Cunningham and their sweet dog Sadie for a hike up 4006-ft. Mount Waumbek. This peak, the highest of the Pliny Range overlooking the town of Jefferson, offers one of the nicest woods walks of any 4000-footer and, in recent years, a decent view from Mt. Starr King and a better one just east of Waumbek's summit. An added incentive for me was the presence of 11 geocache sites along the way.

We set off a little after 9:00 on the mellow Starr King Trail. 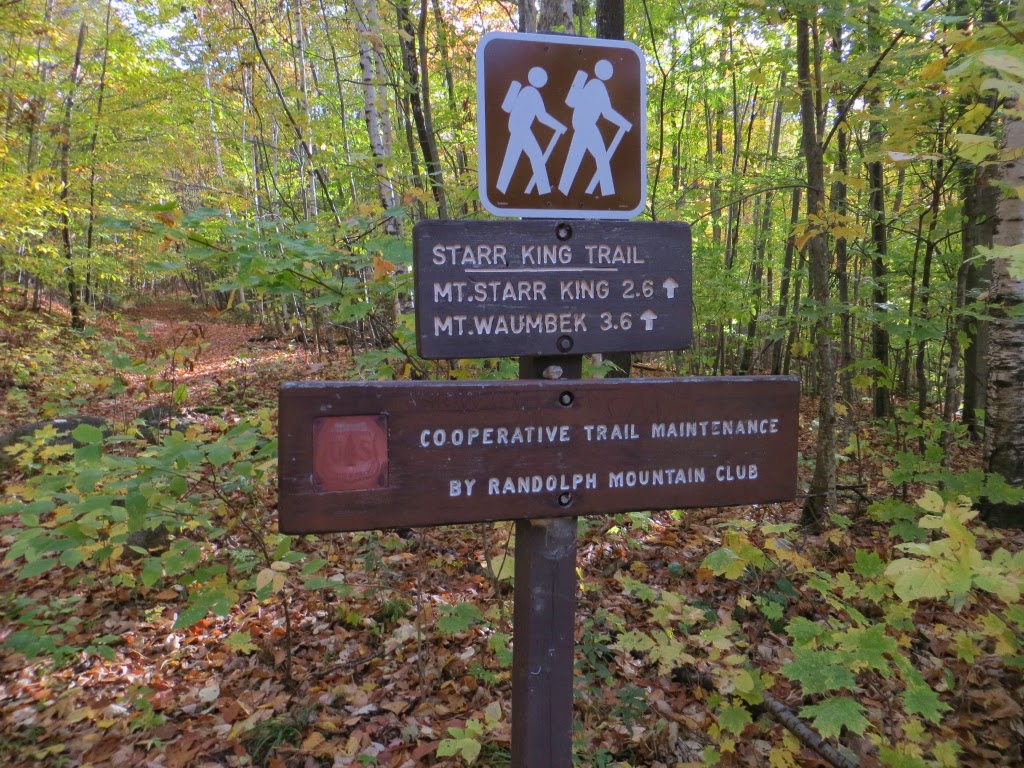 The lower 1.5 mi. of this trail ascends through one of the finest stands of hardwood forest in the Whites. It's an especially magical place when the leaves display their October glow. 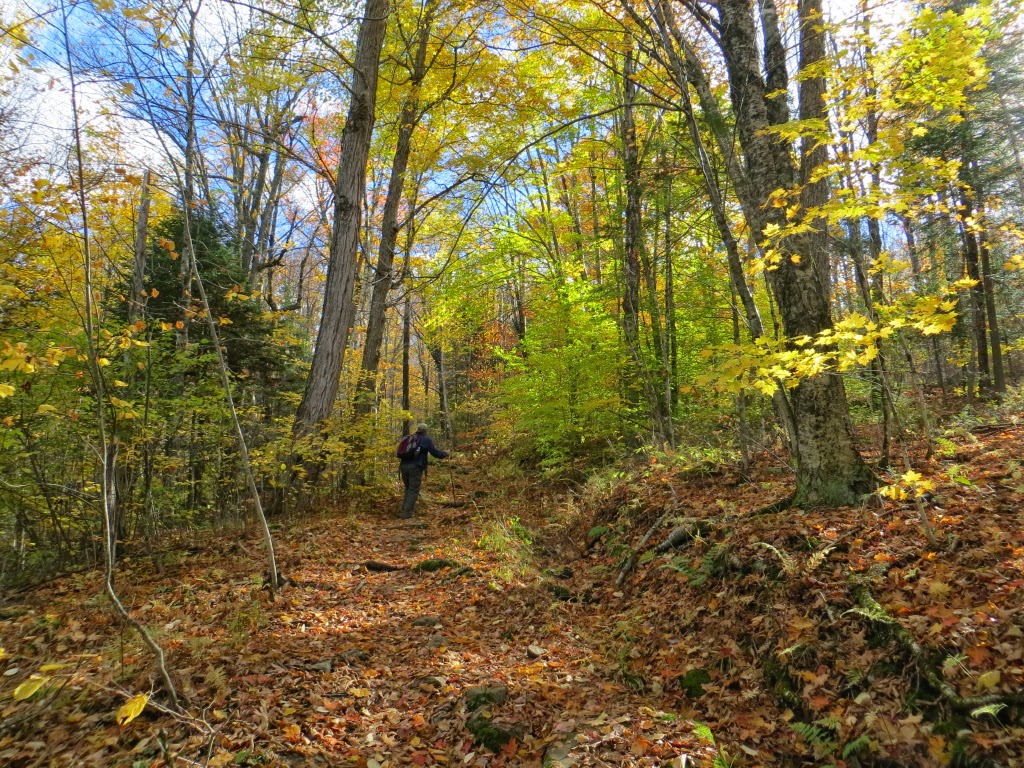 Harry makes his way up through a particularly fine stand of maples. 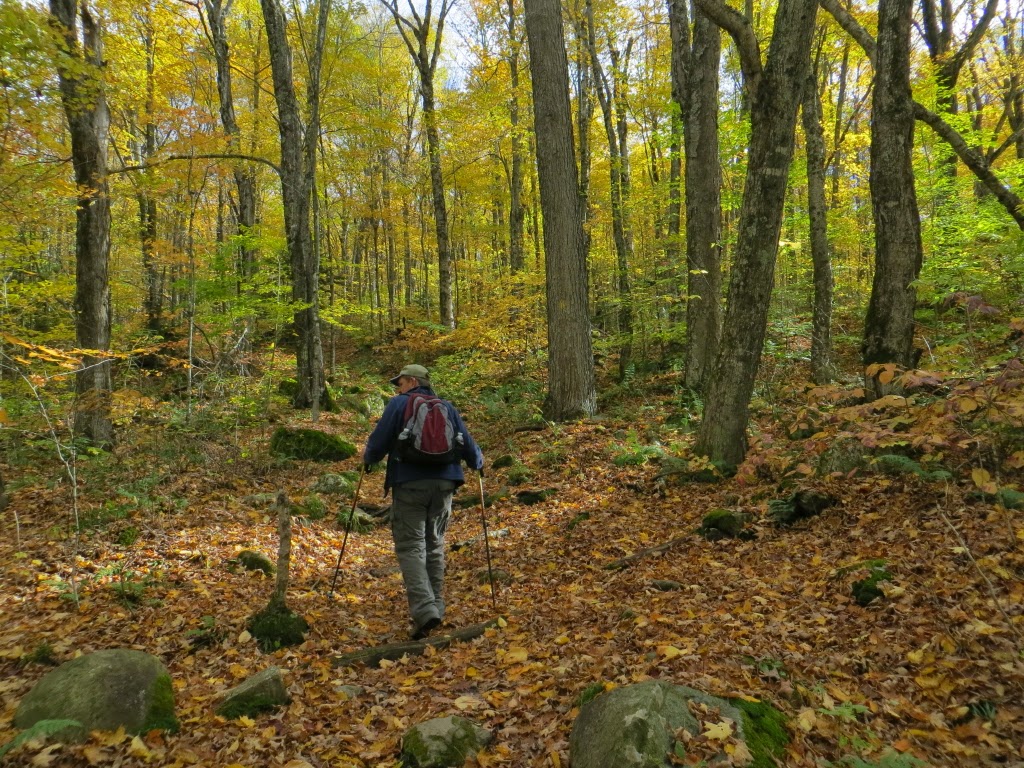 Higher up, the trail gains the crest of the broad ridge SW ridge of Starr King. 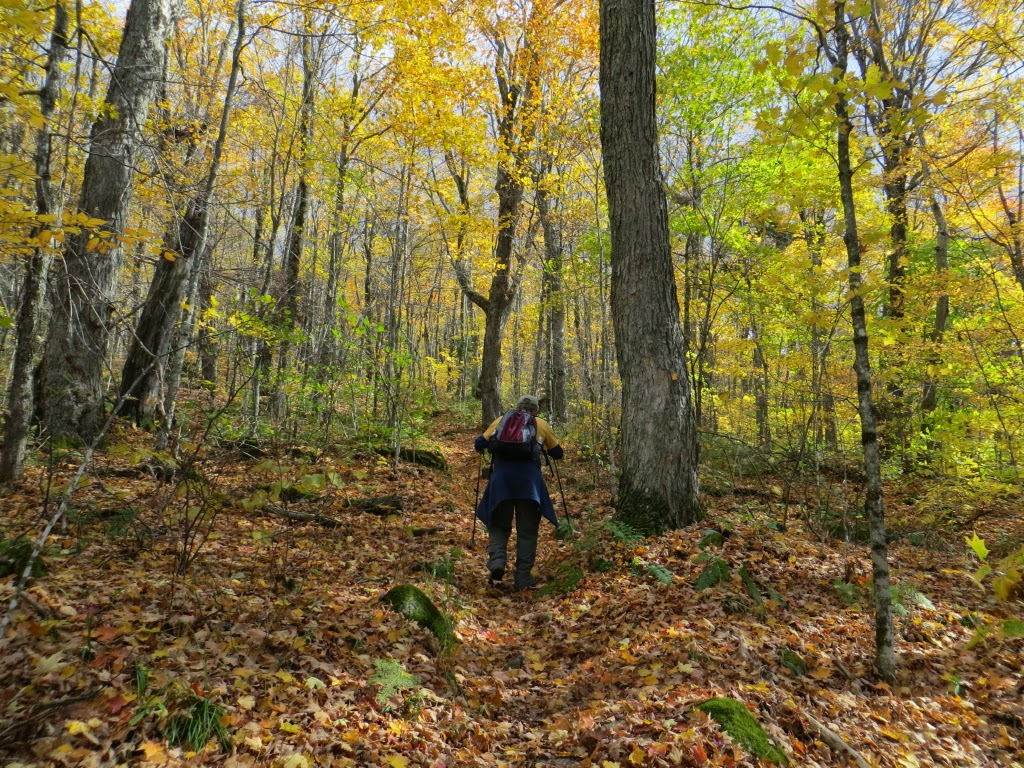 At 2900 ft. the woods abruptly transition to dark softwoods for a mile-long traverse along the northwestern flank of the mountain. In this photo Harry climbs along the final approach to Starr King's summit. 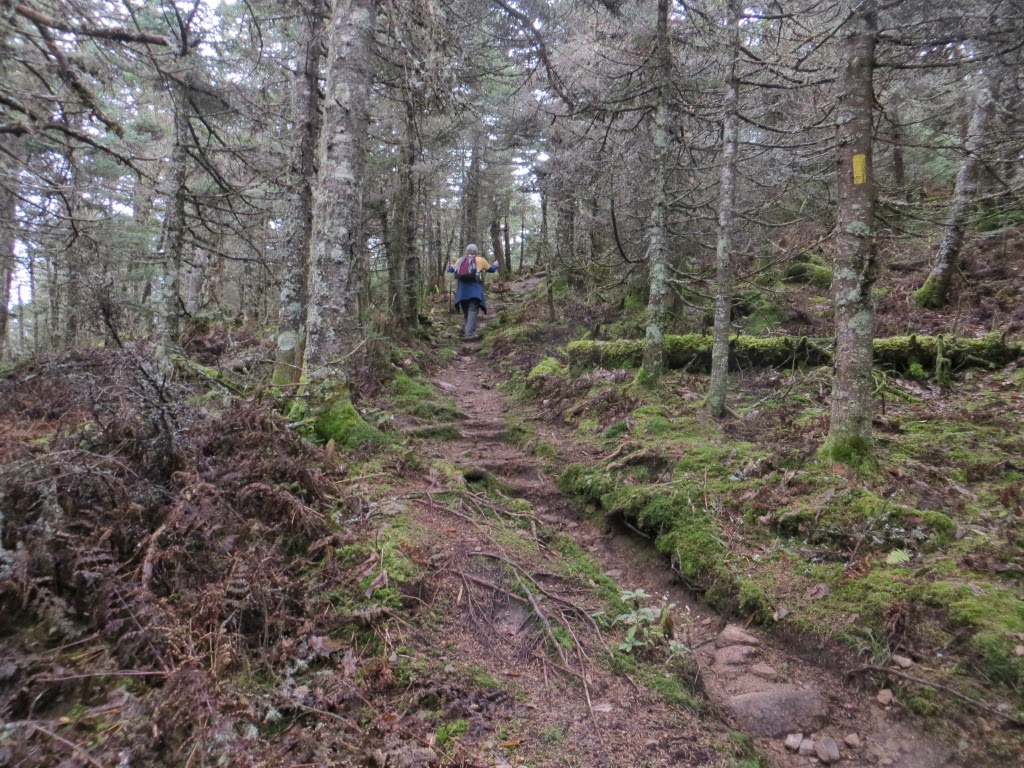 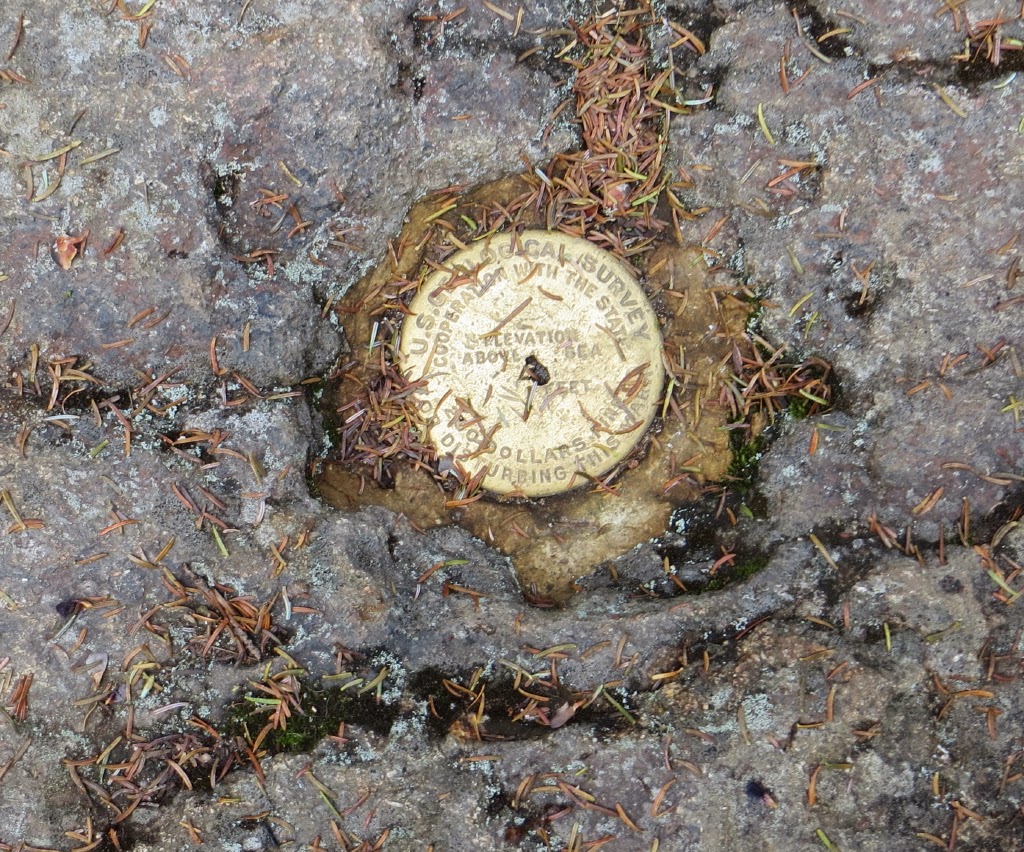 A few years ago the view at the near-summit clearing was almost totally overgrown. It was opened up a few years ago by unknown parties, so Starr King visitors may one again admire the sprawling Presidential Range. 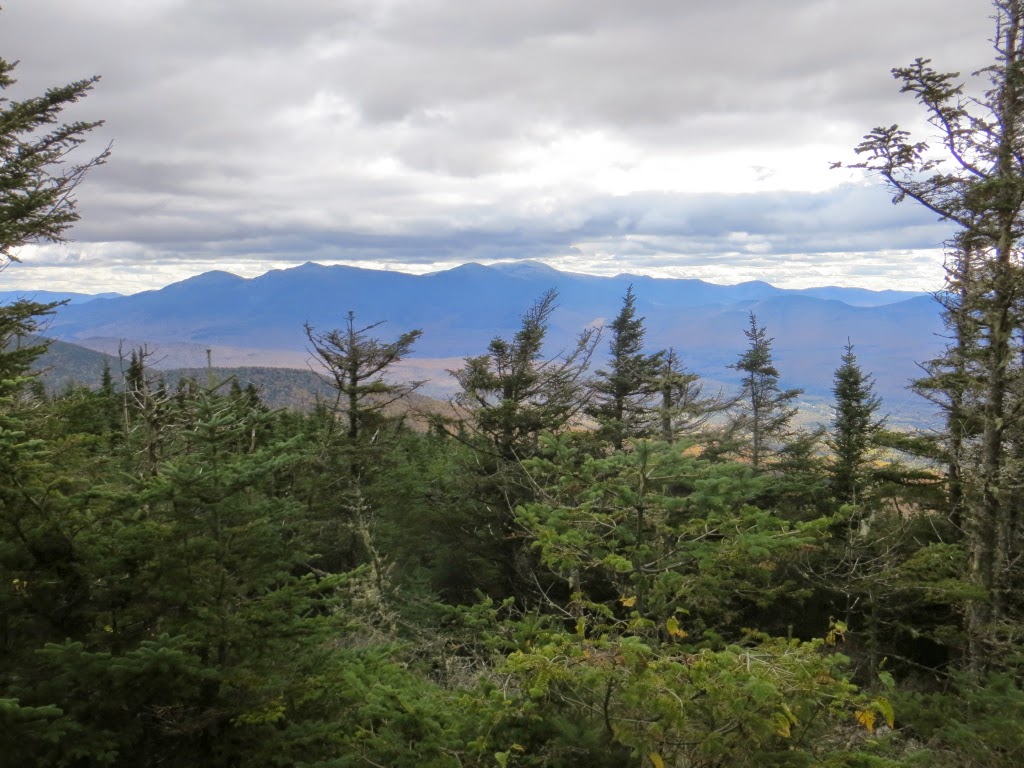 Despite cloudy skies, the views were crisp. Here Mt. Carrigain is seen behind the Willey Range, with the Hancocks to the right. 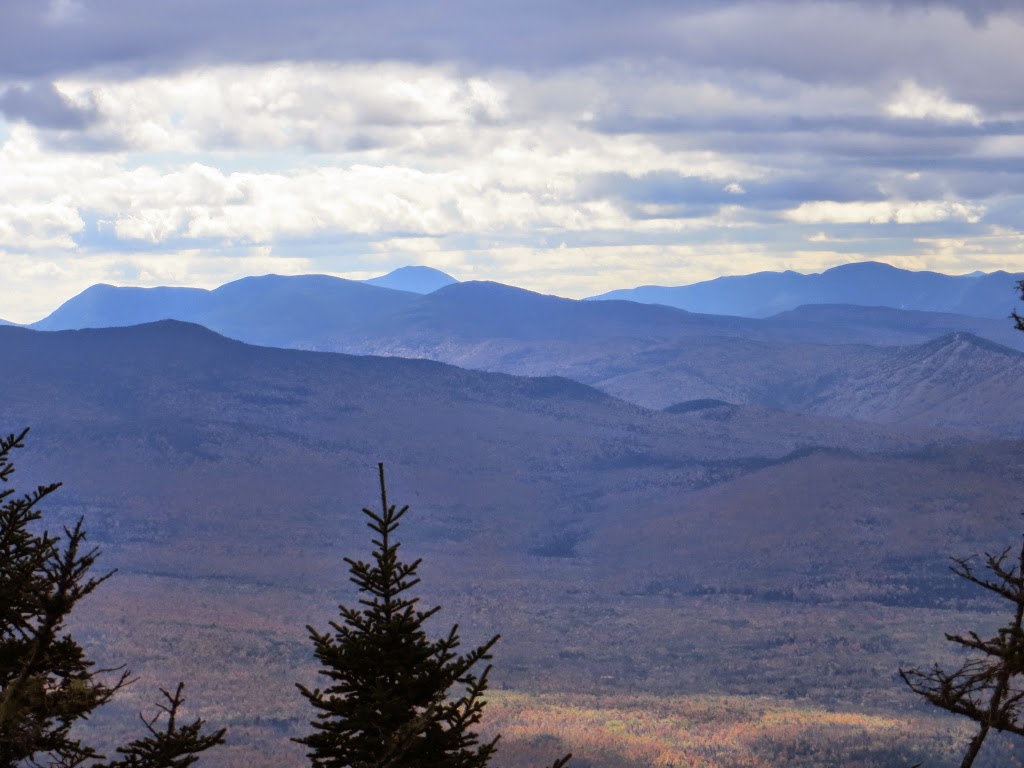 An old chimney is all that's left of an old shelter that once stood here. In the fall of 1979 I spent a cold night in this shelter with two friends. One of the geocache sites is located near the chimney. 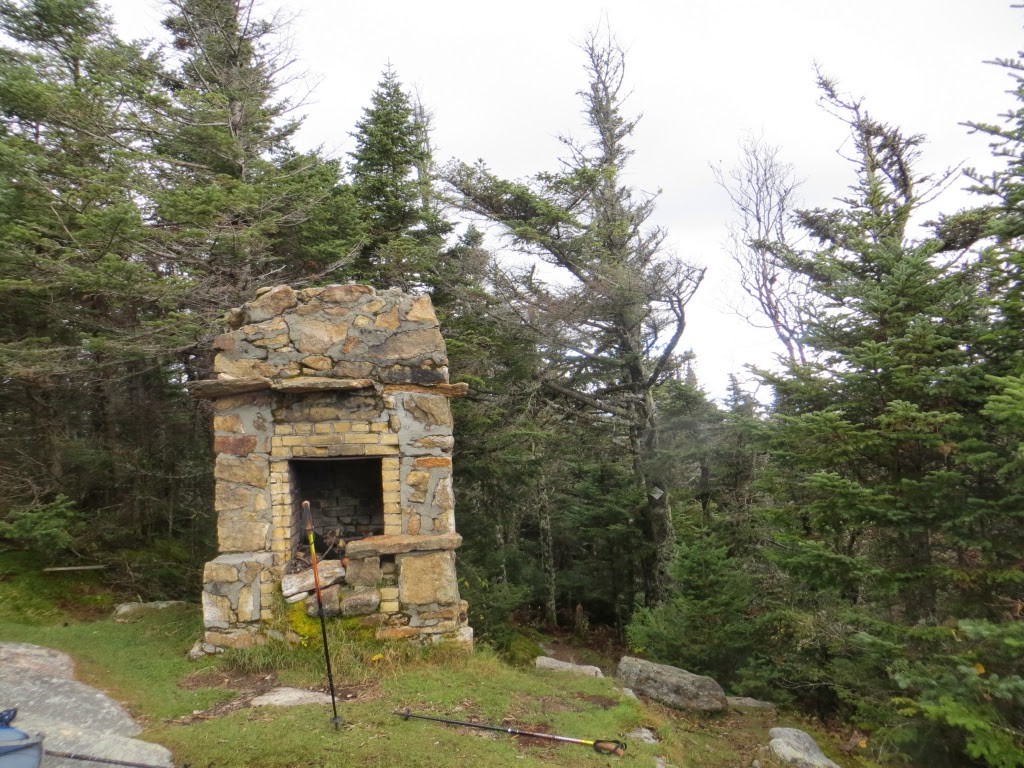 Gray Jays are another attraction for the hike to Mount Waumbek. 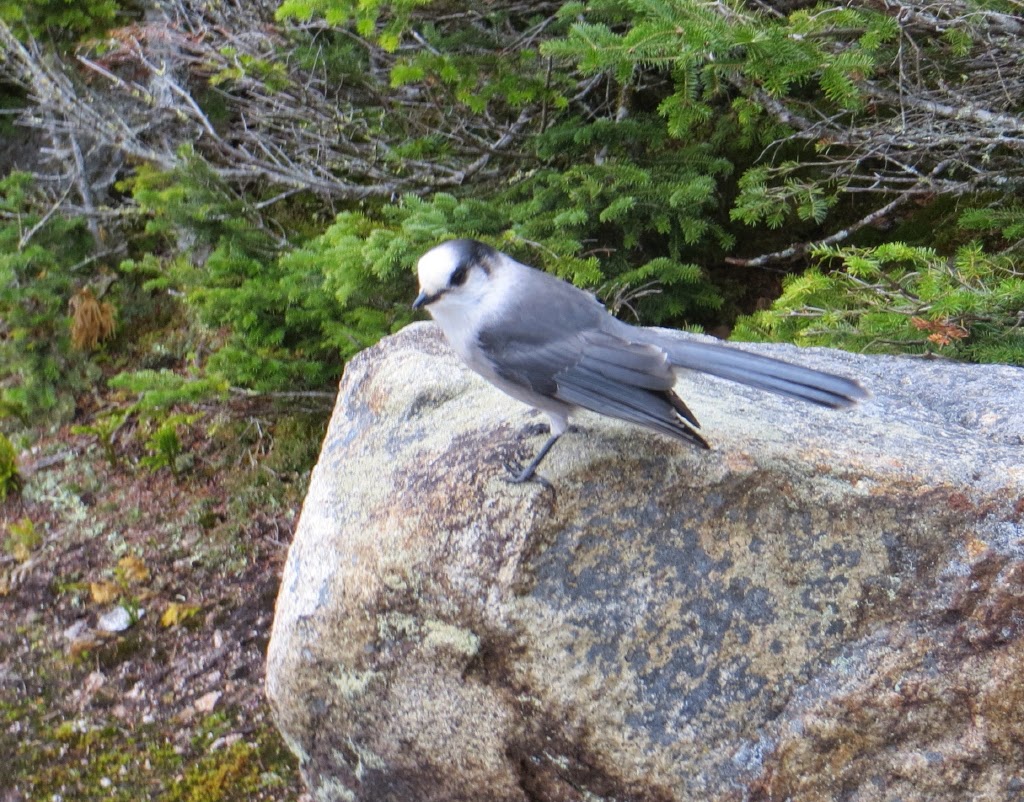 The walk across the ridge between Starr King and Waumbek leads through an enchanted fir forest, typical of the Pliny Range ridges. 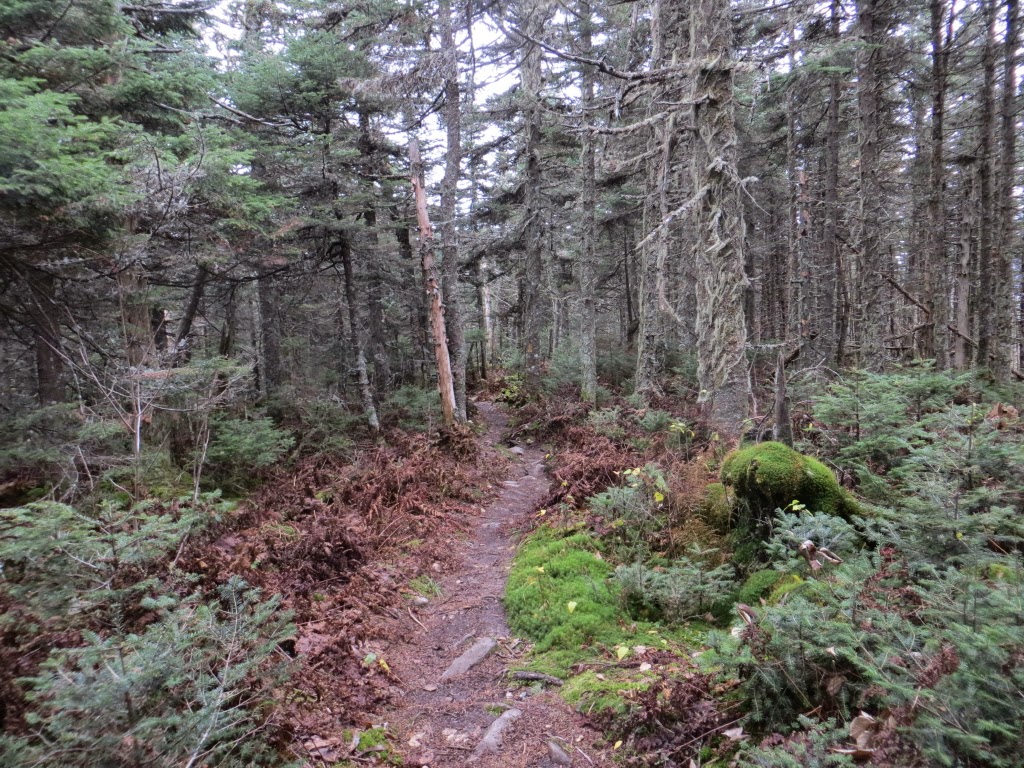 Harry & Barb cuddle up for warmth at the small summit clearing on Waumbek as Sadie looks on. 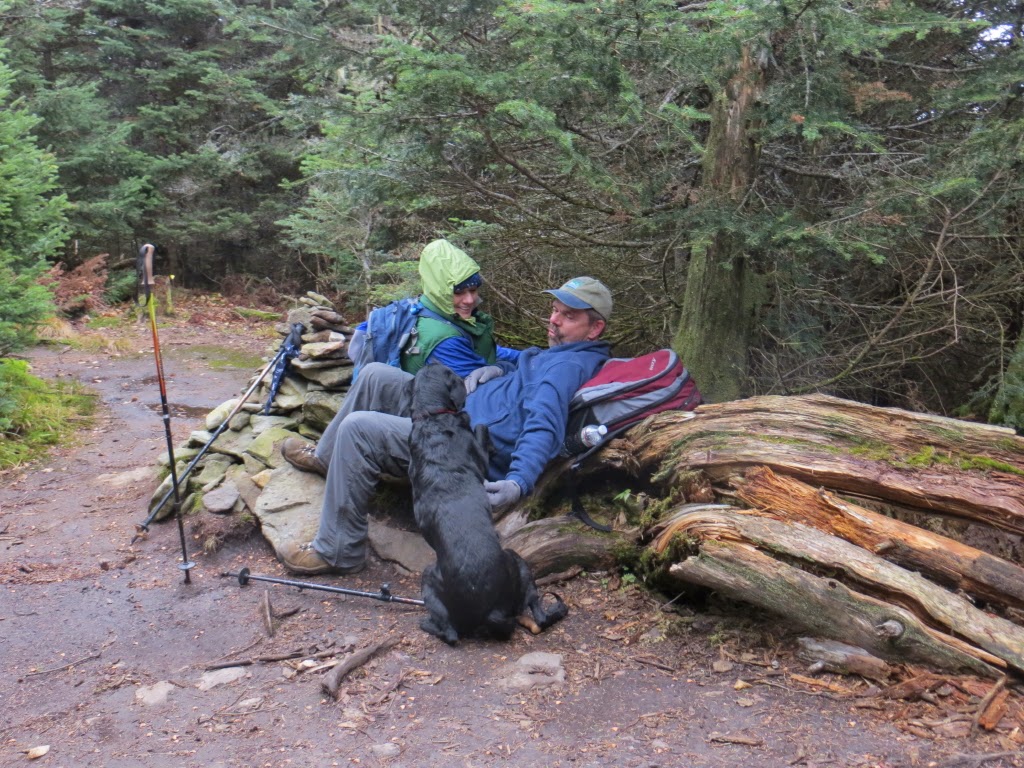 Trail sign at the summit. This trail is well-maintained by the Randolph Mountain Club. 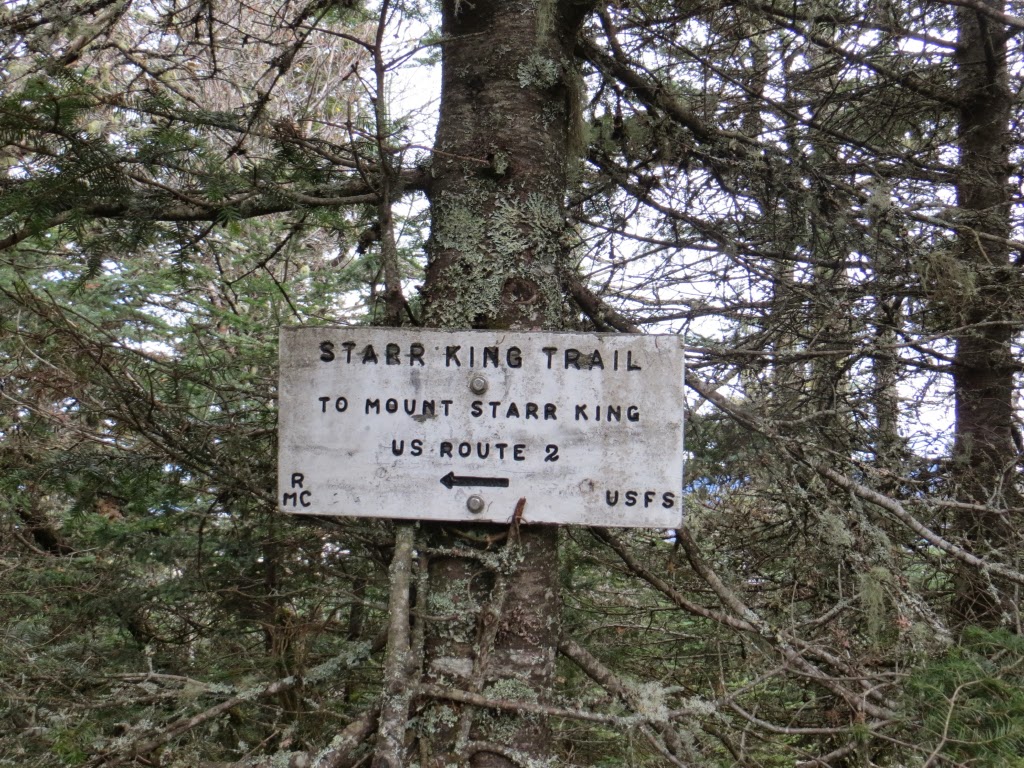 The Waumbek viewpoint is located a short distance east along the 20-mile Kilkenny Ridge Trail, one of my favorite routes in the Whites. 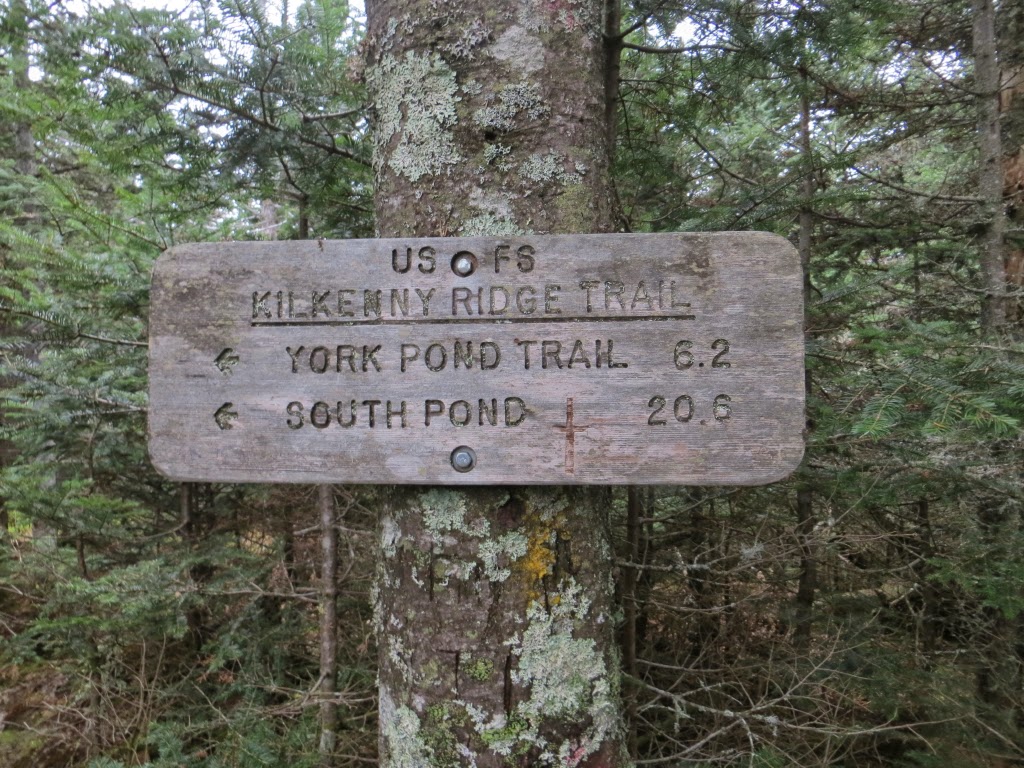 Harry and Barb take in the view, originally created by a blowdown opening and, perhaps, helped along by some judicious cutting of dead standing trees. 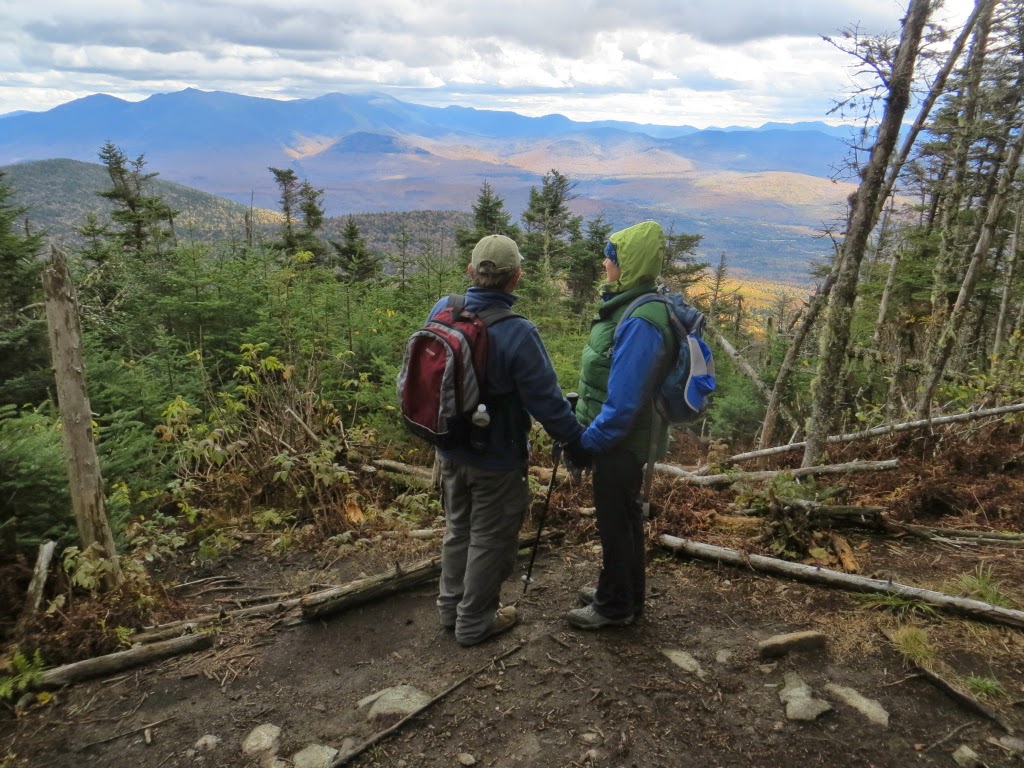 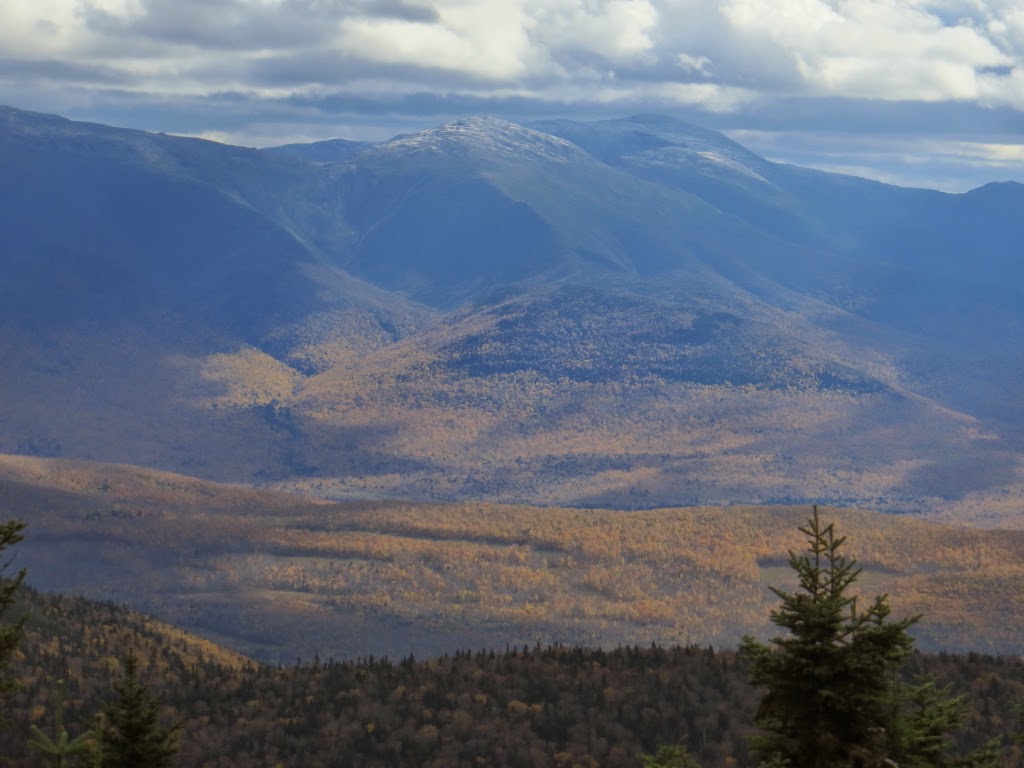 I always enjoy the 0.2 mile walk across the Kilkenny Ridge Trail to the east summit of Mount Waumbek, which is only slightly lower than the main summit. It's amazing how the trail takes a turn to the wild as soon as you pass the Waumbek outlook. It doesn't see much traffic beyond this point. 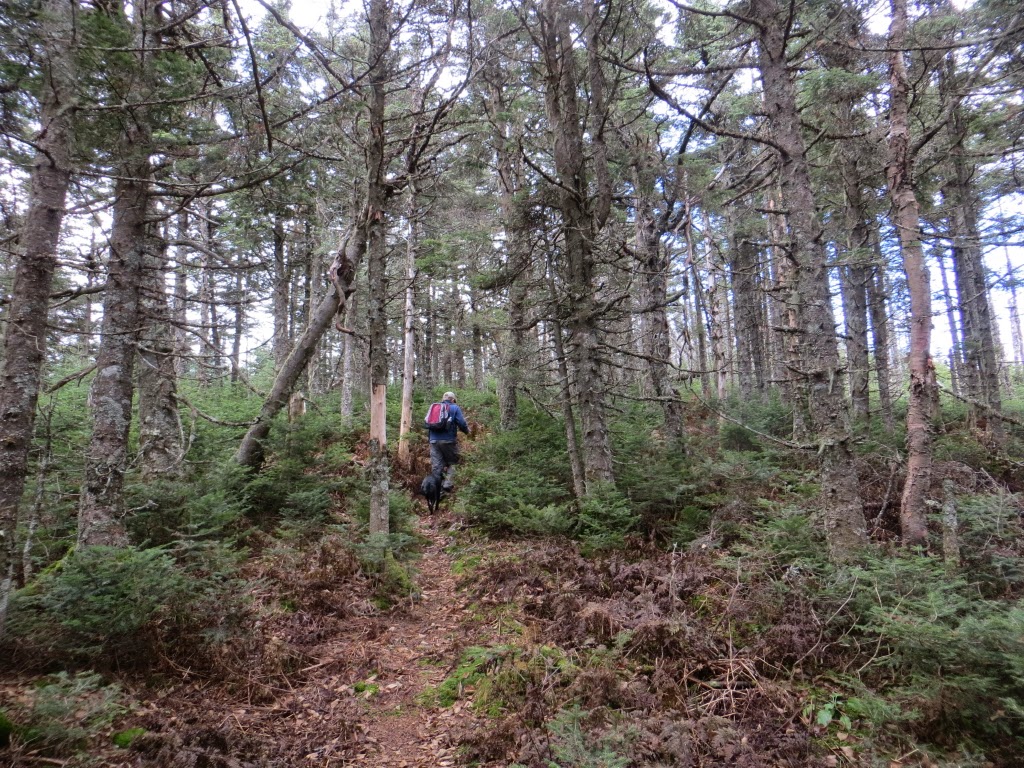 There is a very restricted view north to some of the Kilkenny peaks from the east summit, a "little upland spike," in the words of Cohos Trail founder Kim Nilsen. Here is a glimpse of Mt. Cabot and its talus slopes, with the sharp peak of The Horn jutting up on the right. You can see a lot more with the lift of deep late winter snows. 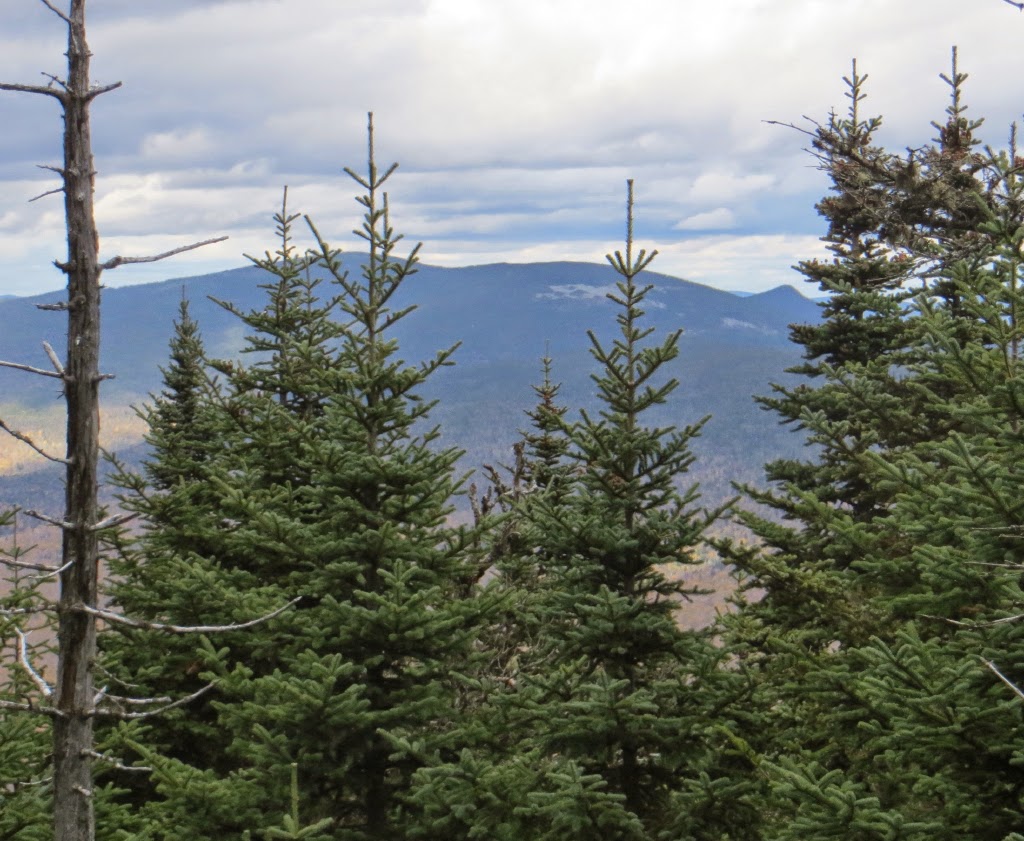 At the east summit, near the site of another geocache. 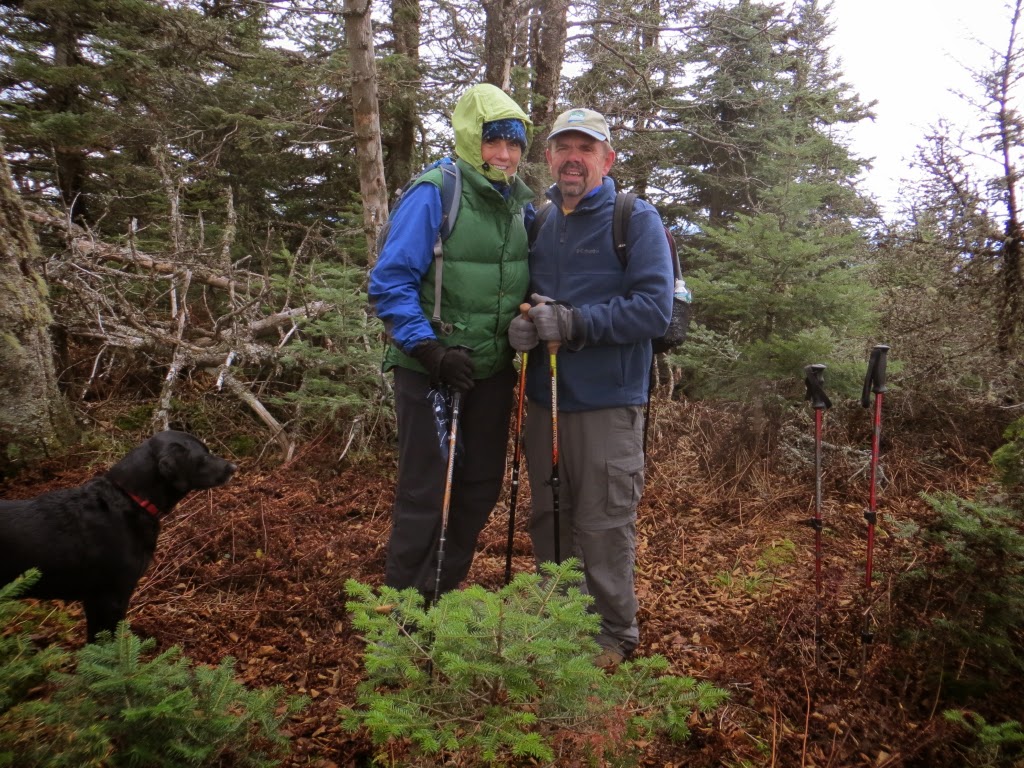 Parting shot of the view near the main summit. 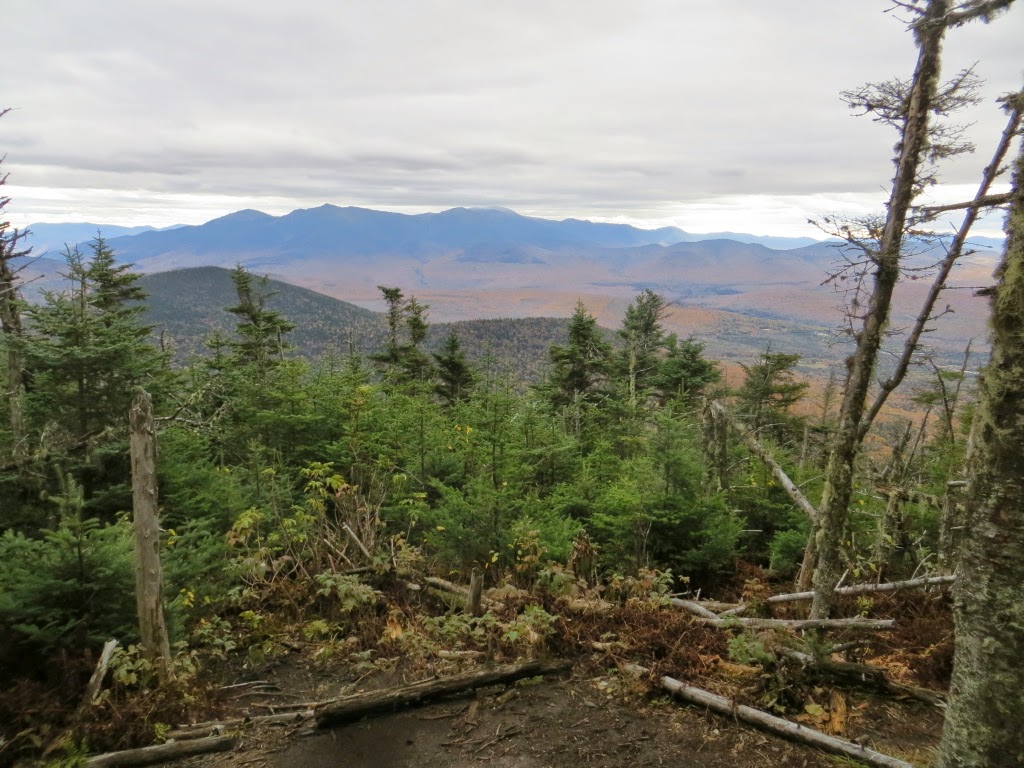 On the way down we got to pass through those glorious hardwoods once again. I found one final geocache and for the day went 10 for 11 on finding them. A good hike all around! The trek to Mount Waumbek is 7.2 mi. round trip with 2700 ft. of elevation gain. Add 0.4 mi. round trip and 100 ft. for the east summit. 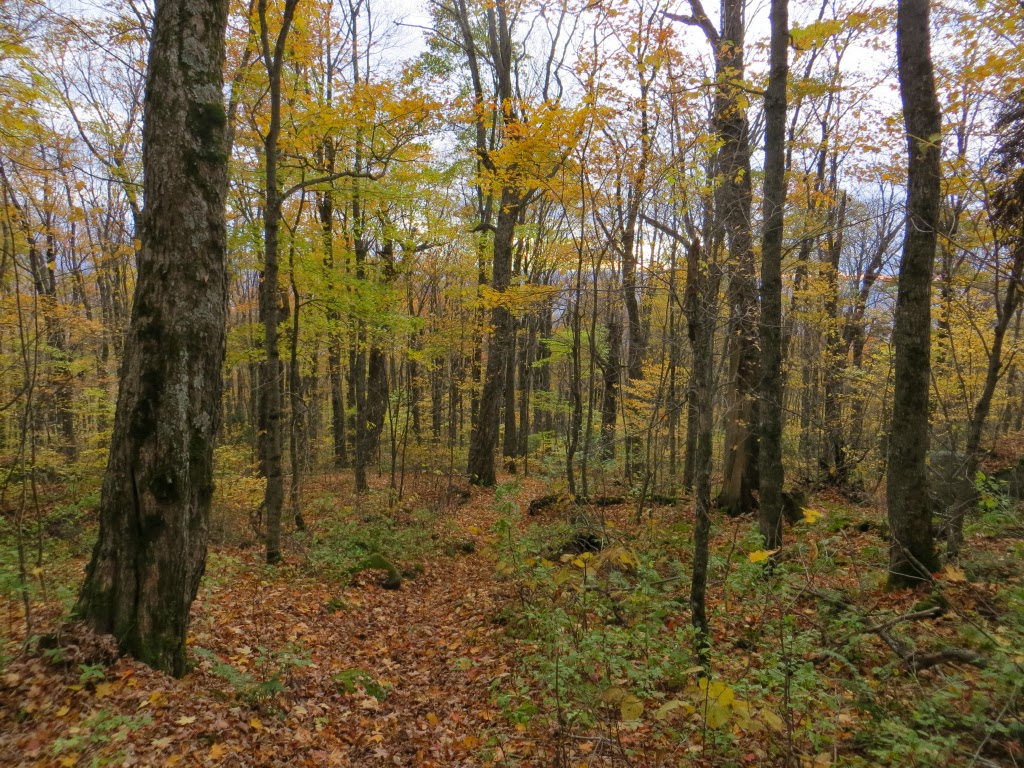