The snow conditions have been great off-trail in the Kinsman Notch area, so I returned there for the third in a series of snowshoe bushwhacks to lower elevation viewpoints. On this trek I went up and back on a ridge I had previously traversed in the spring of 1995. This almost pure-hardwood ridge runs across the center of the picture below; two of the three view ledges I visited are visible. 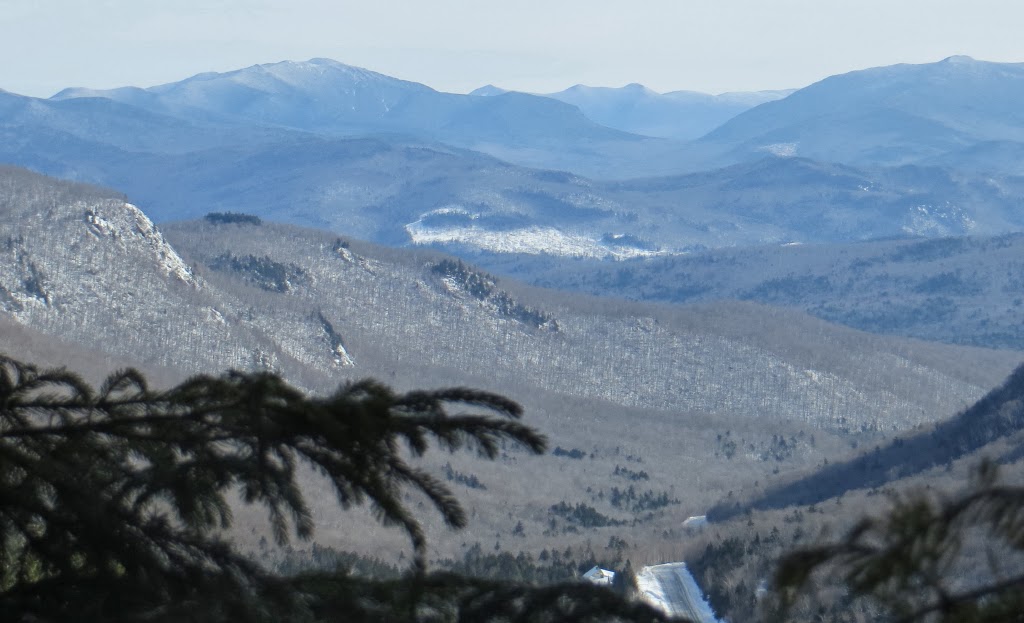 There was no place to park on Rt. 112 by the base of the ridge, so I parked at a plowed pullout 0.4 mi. up the road that is used by ice climbers heading up to the popular "Luck of the Irish" climbing area. From here I could look up to my target ridge on the R and the "Monkey Cliffs" on the L. These are so named because apparently there is, or was, the profile of a monkey seen on the rock face, but I'm not sure exactly where. 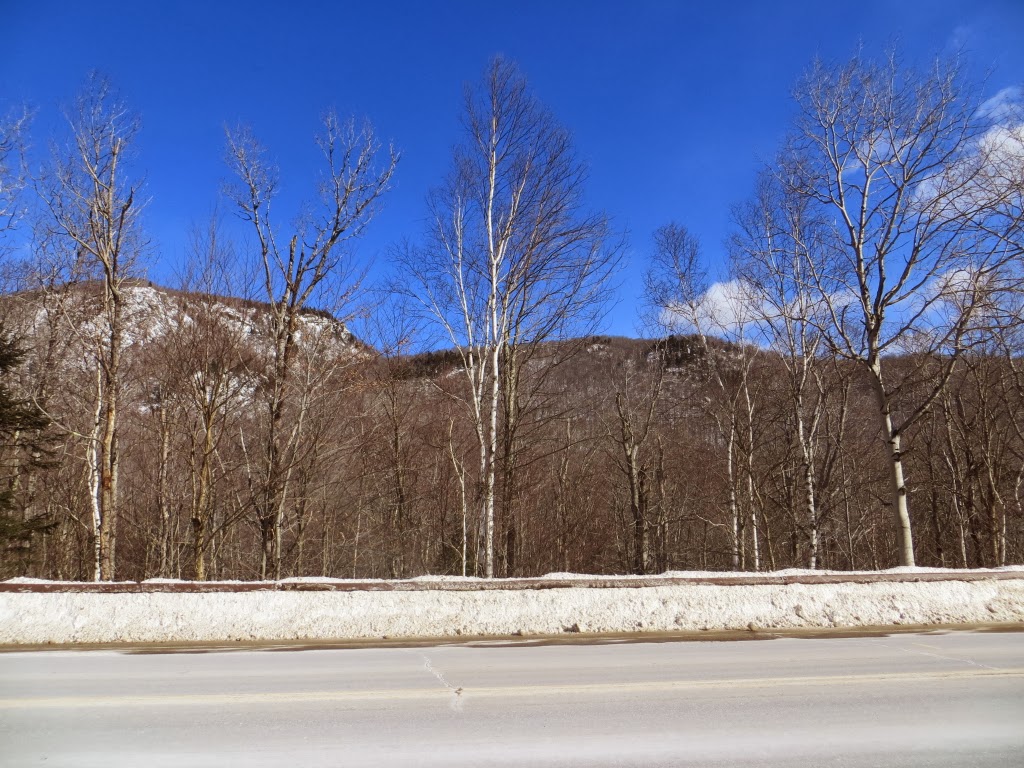 It was pretty cold, with the temp around 10 above, but the sun and blue sky were wonderful - a good day for hardwood whackin'. 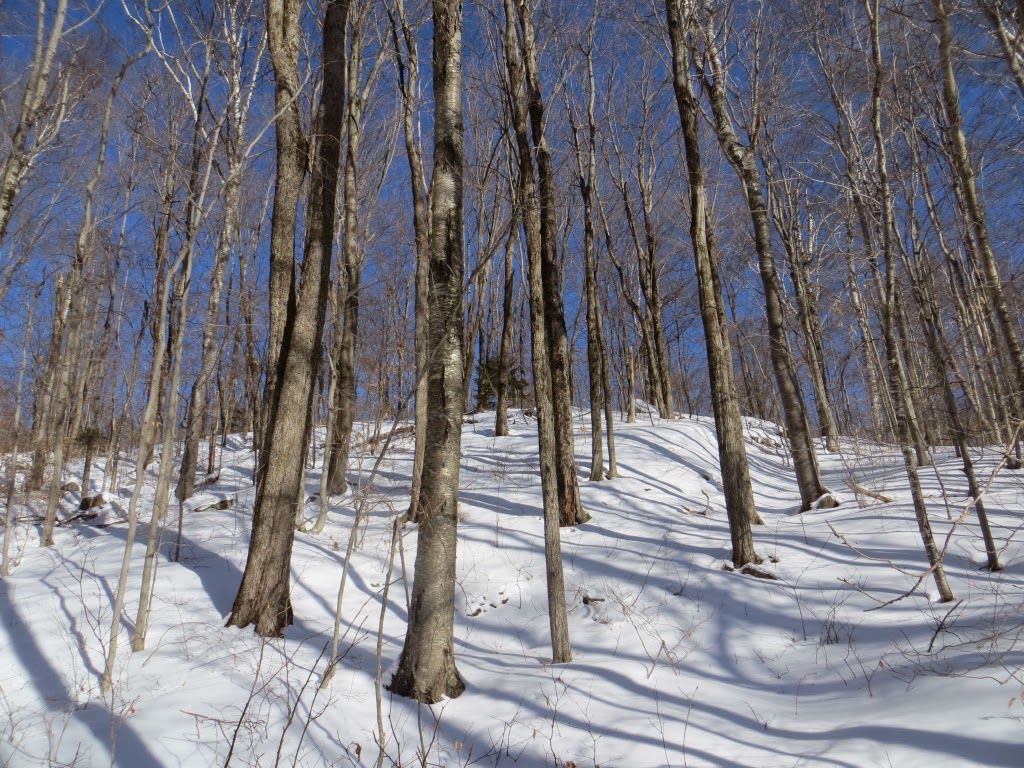 Snow conditions were excellent - a few inches of powder atop a solid base. 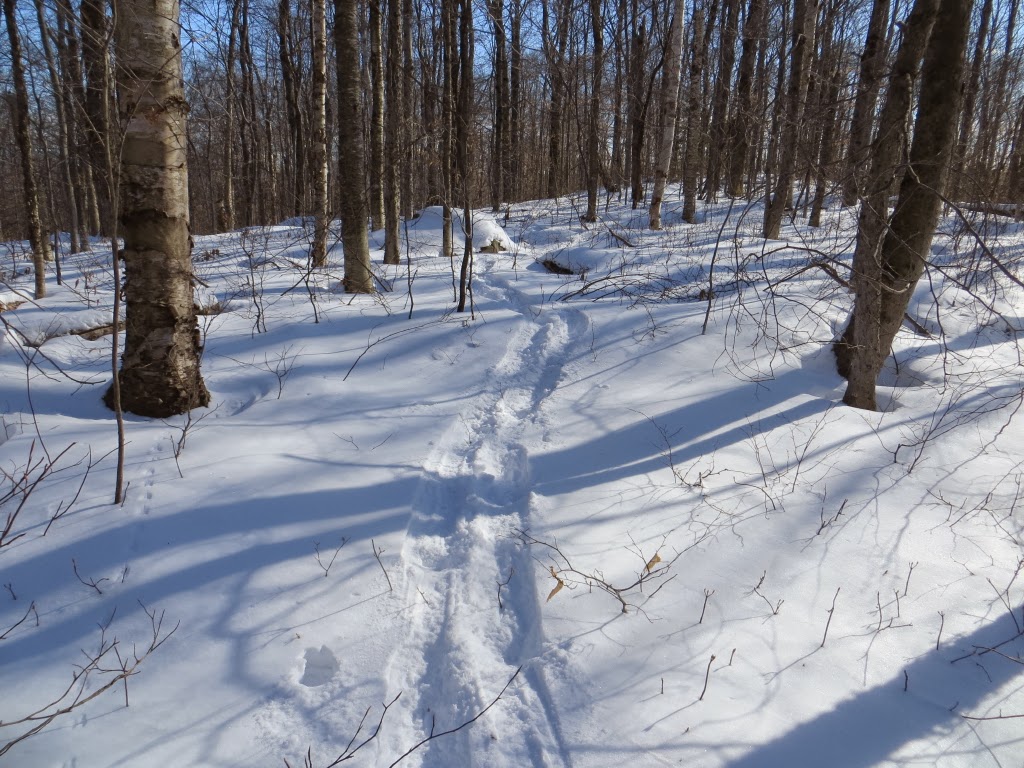 My route briefly followed an old logging road well up on the ridge. 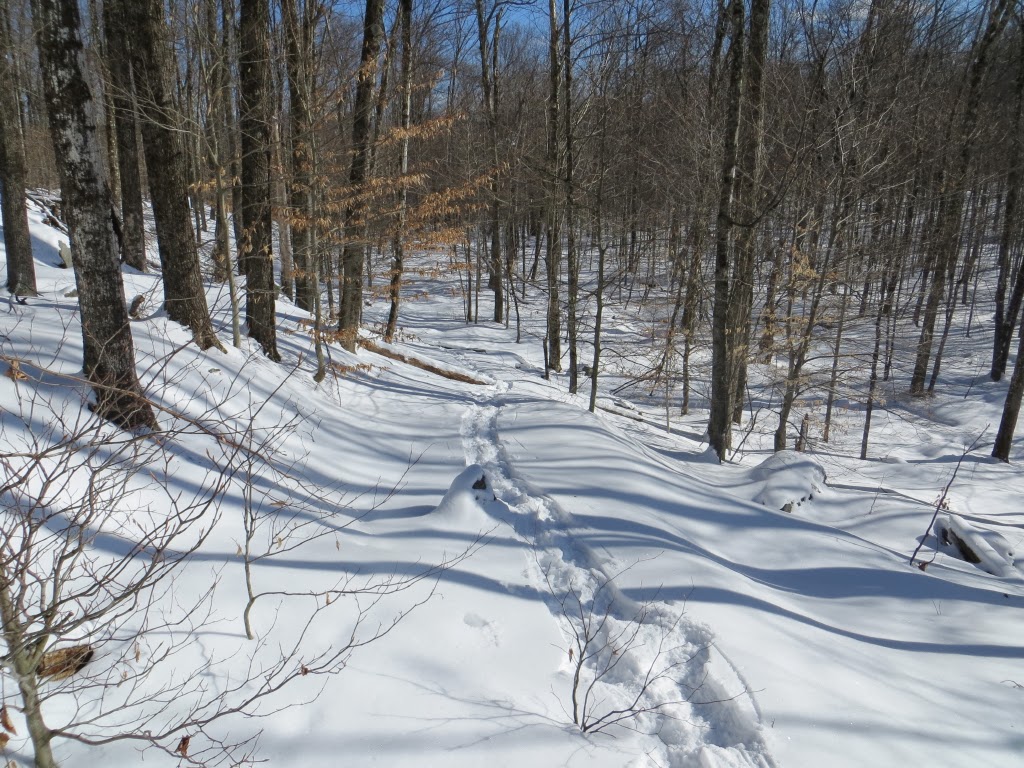 The finest ledge perch on the knob faces west and offers a nice view of Mts. Waternomee, Jim and Blue, all in a row. On the L is a lower spur of Waternomee. 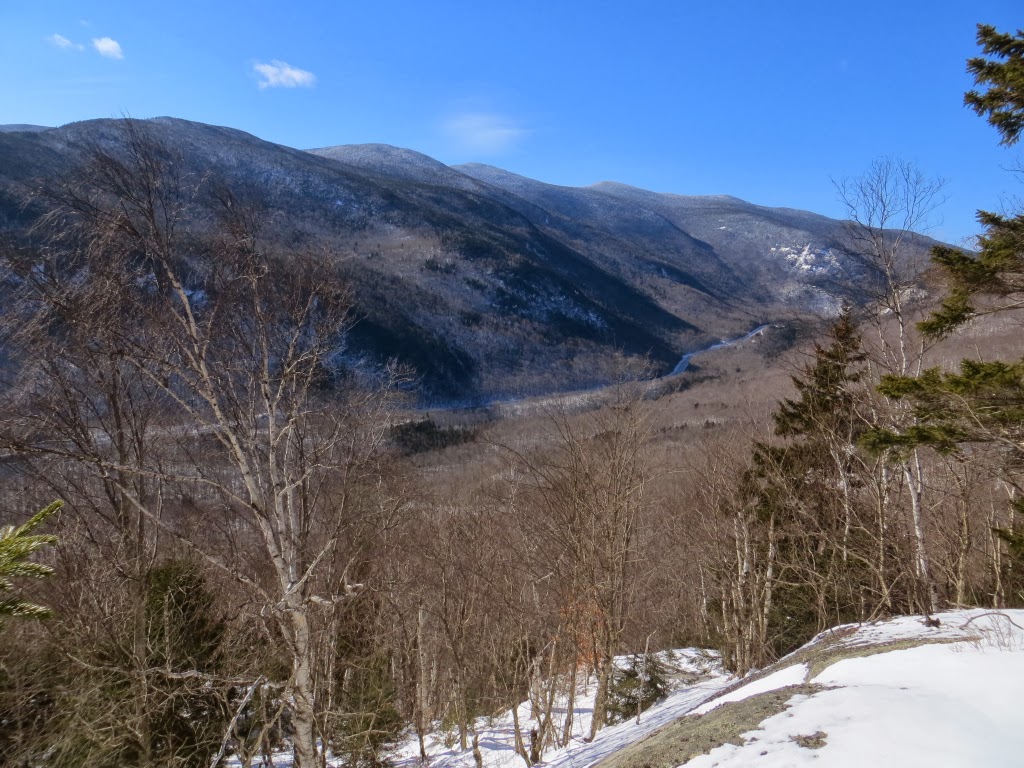 A zoom peering into the heart of Kinsman Notch. The cliffs and plateau I visited on 1/23 can be seen to the R of center, fairly low down under the set of sheer crags. 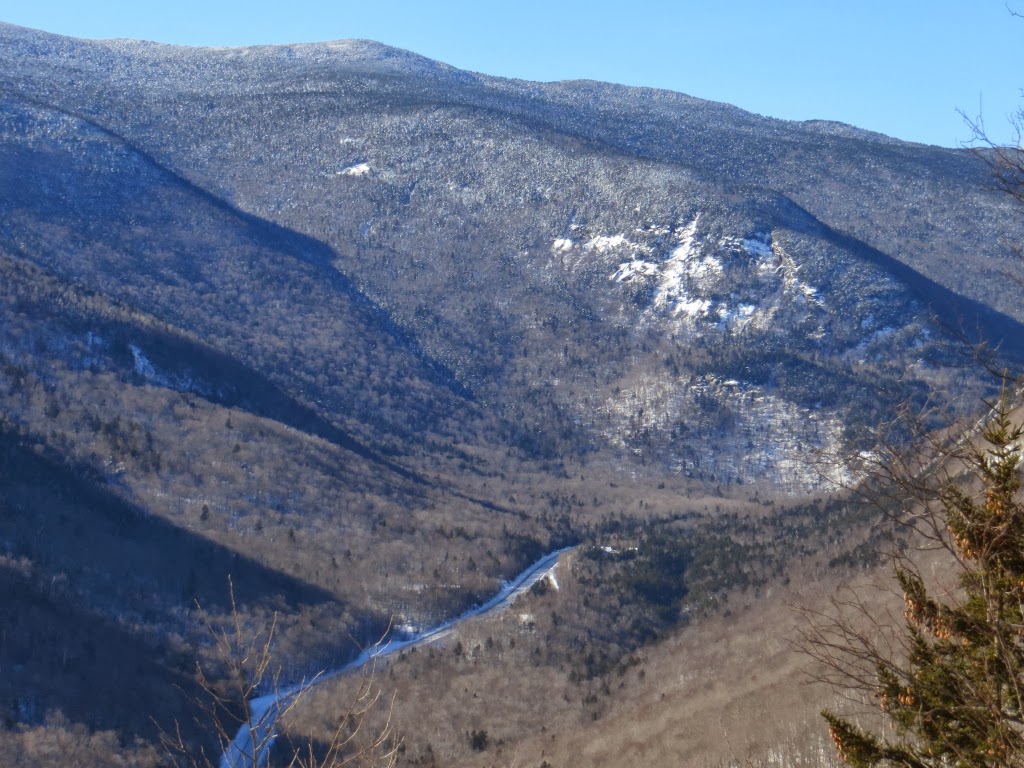 Looking down the face of the view ledge. 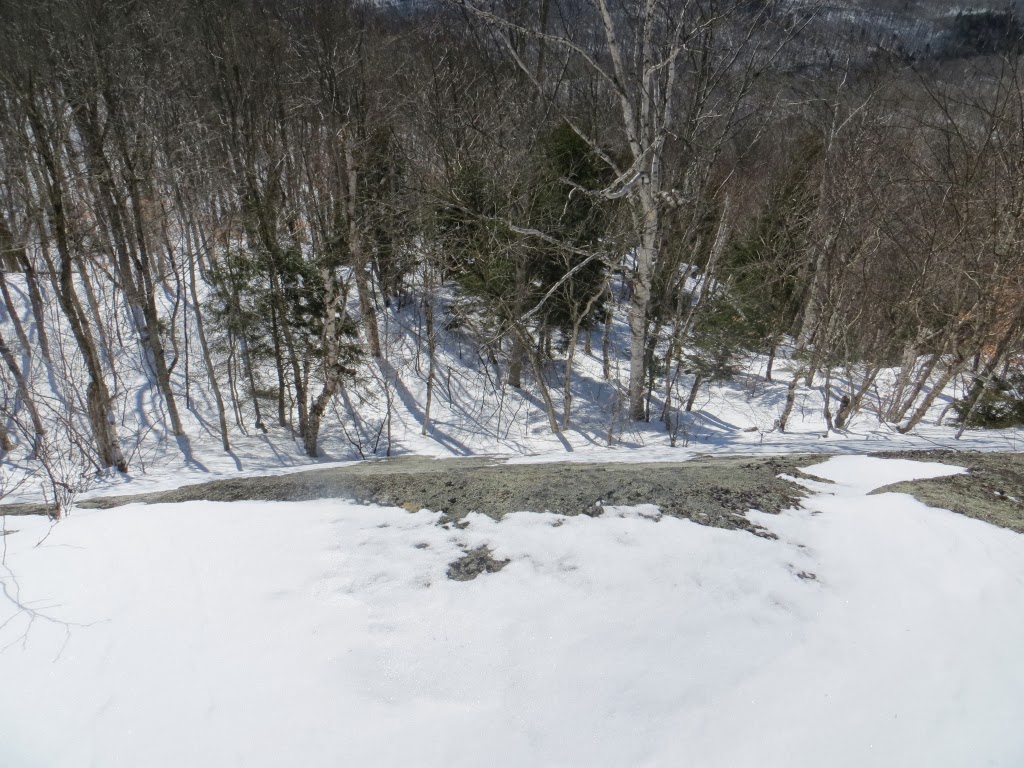 After enjoying a lunch break on the sunny (but breezy) ledge, I continued up to the top of the 2100-ft. knob, which bears a ledgy cap of spruces. 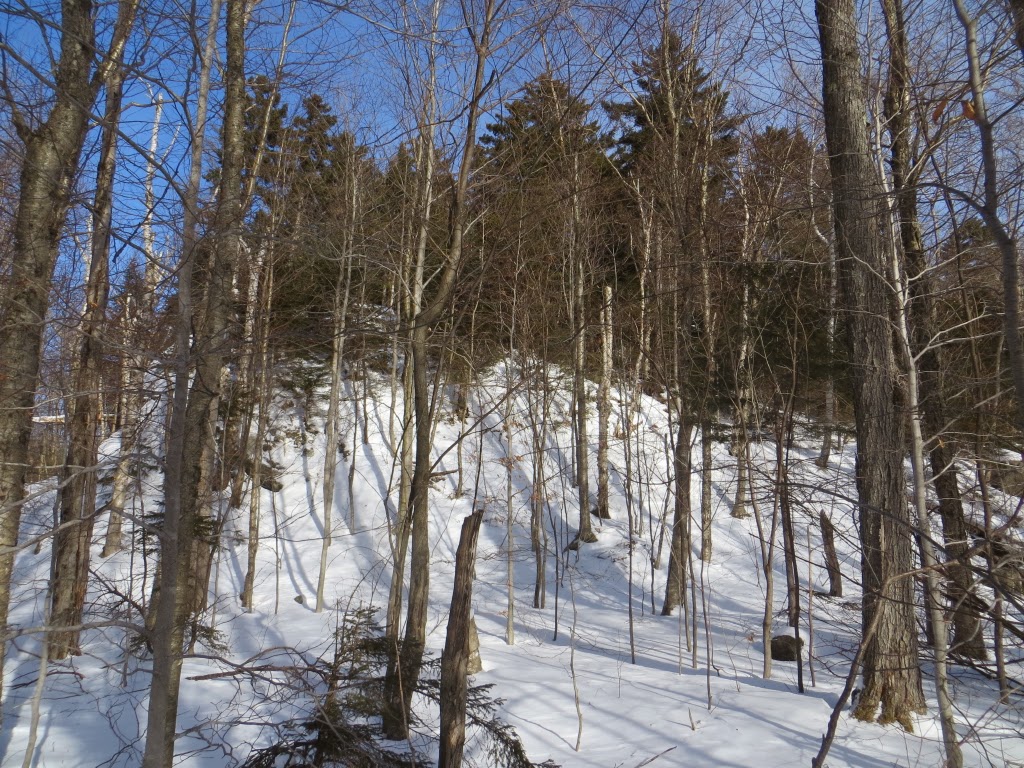 The "summit" of the knob. 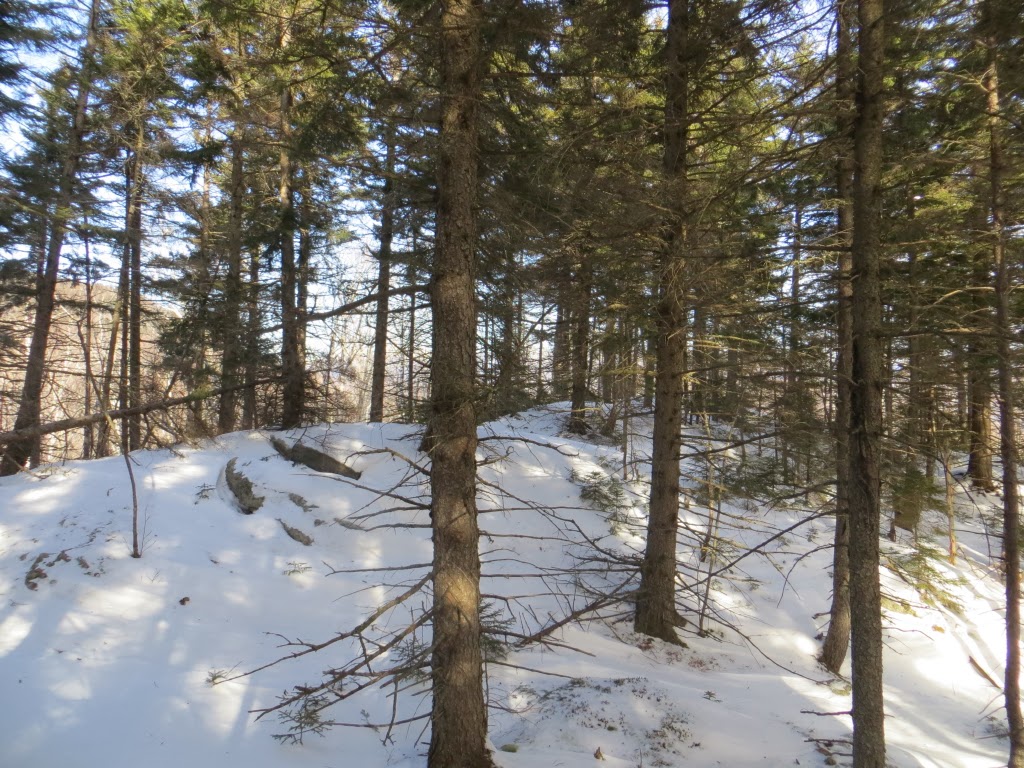 I dropped down to a ledge on the NE side of the knob with a fine view of the Franconia Range. 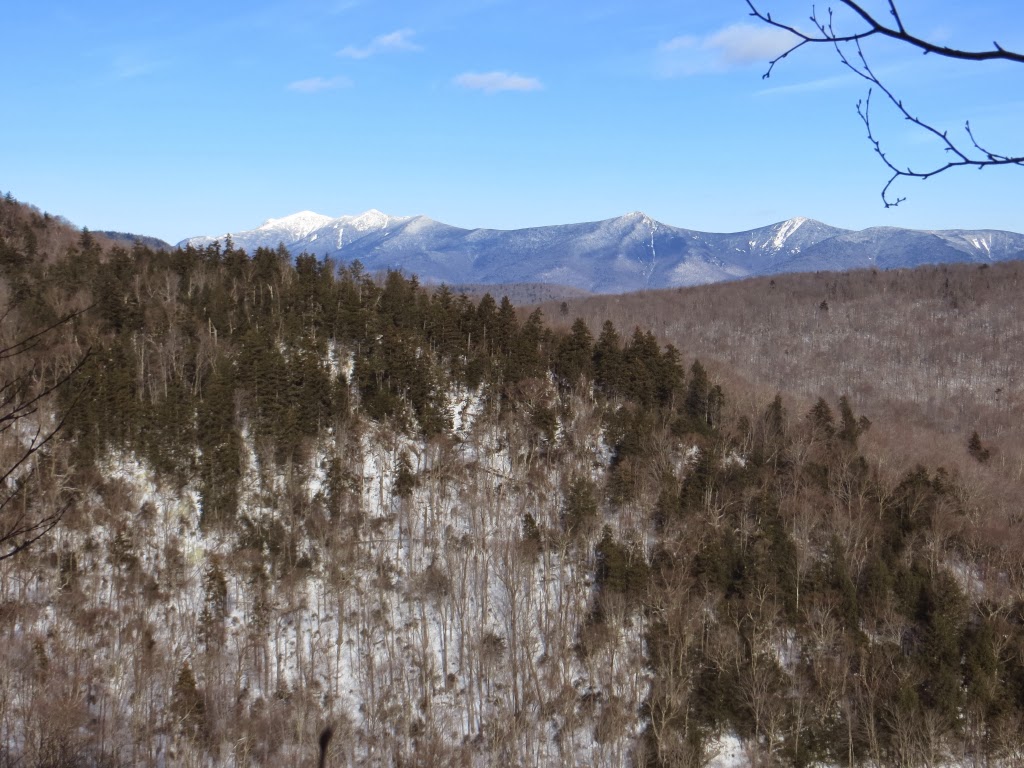 The sharp peaks of Mts. Lafayette and Lincoln. 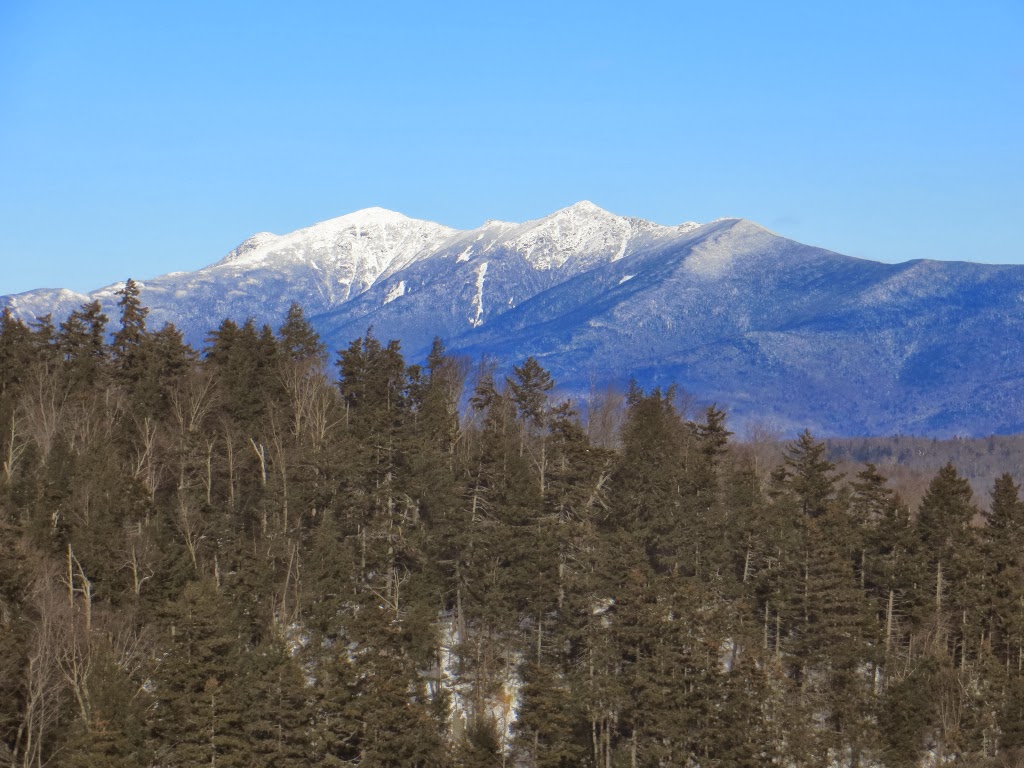 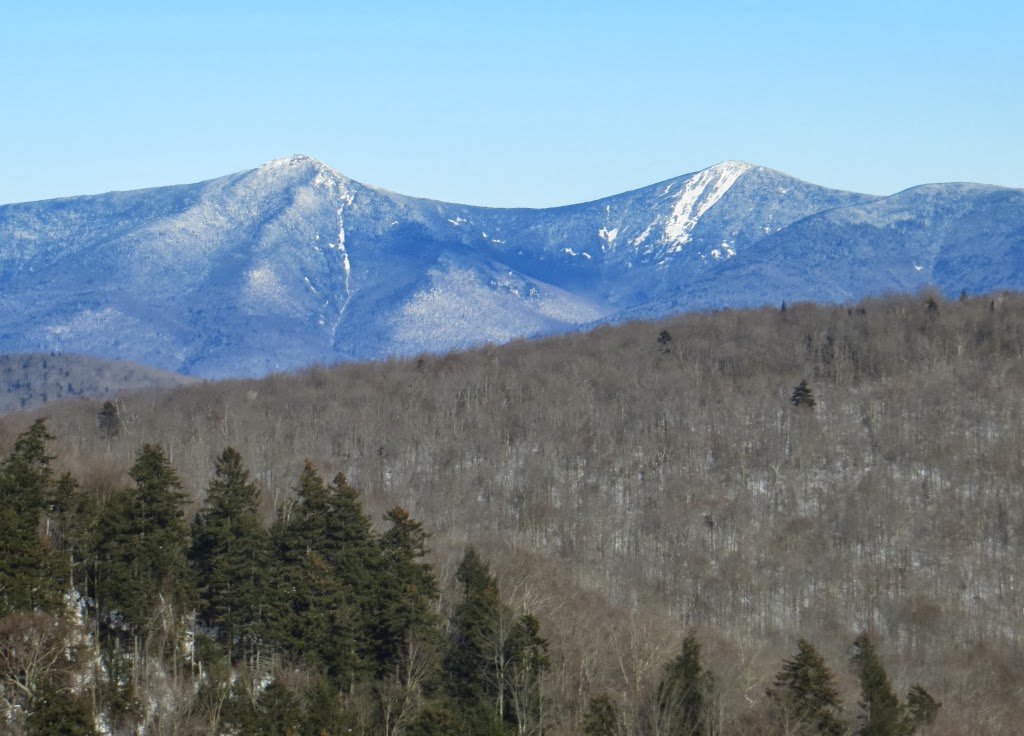 Looking east to the Hancocks, the town of Lincoln, and Loon Mtn. Ski Area. 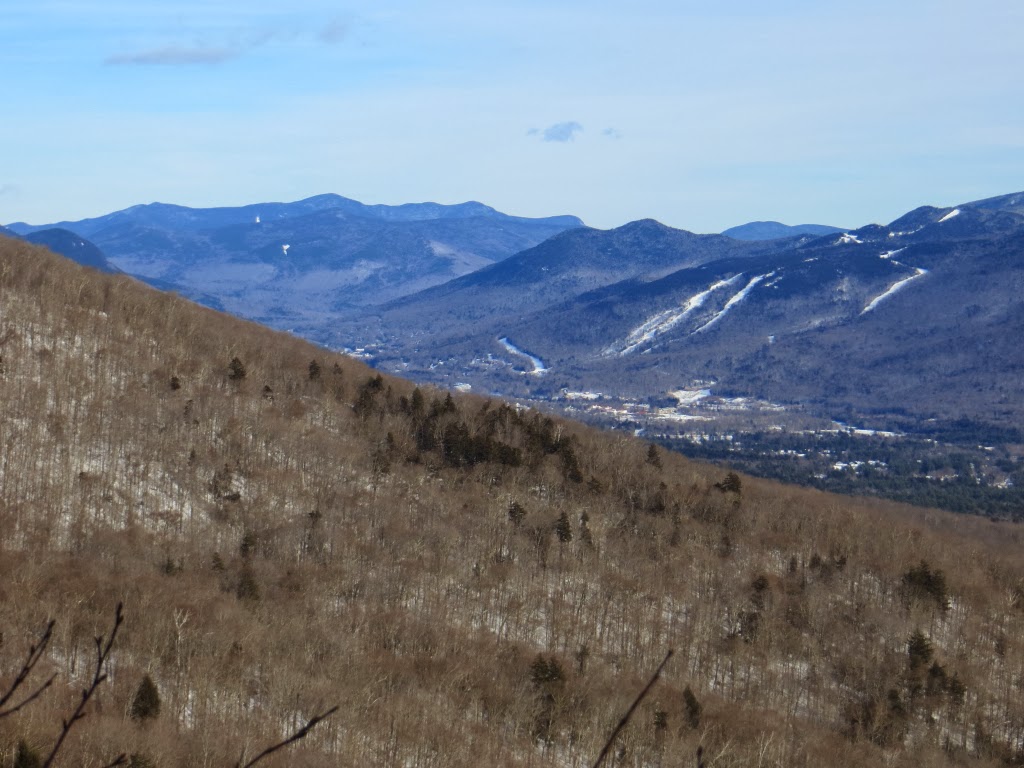 Next I traversed across to the plateau-like hardwood col between the knob and the Monkey Cliffs. 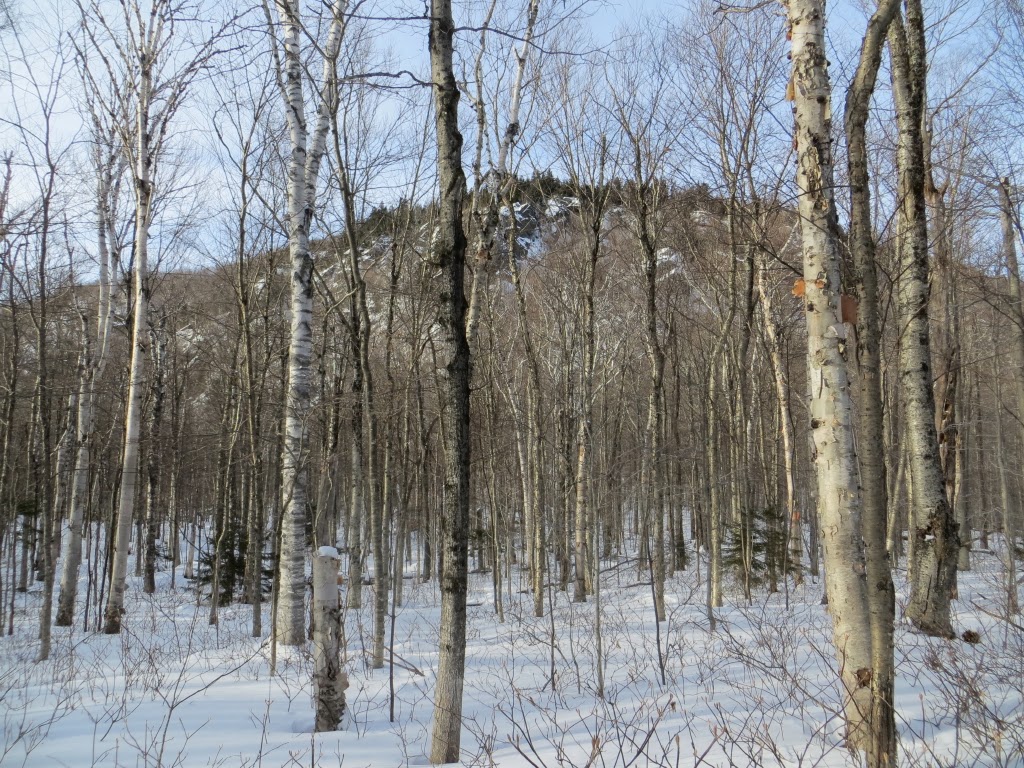 There was some deep drifted powder in here! 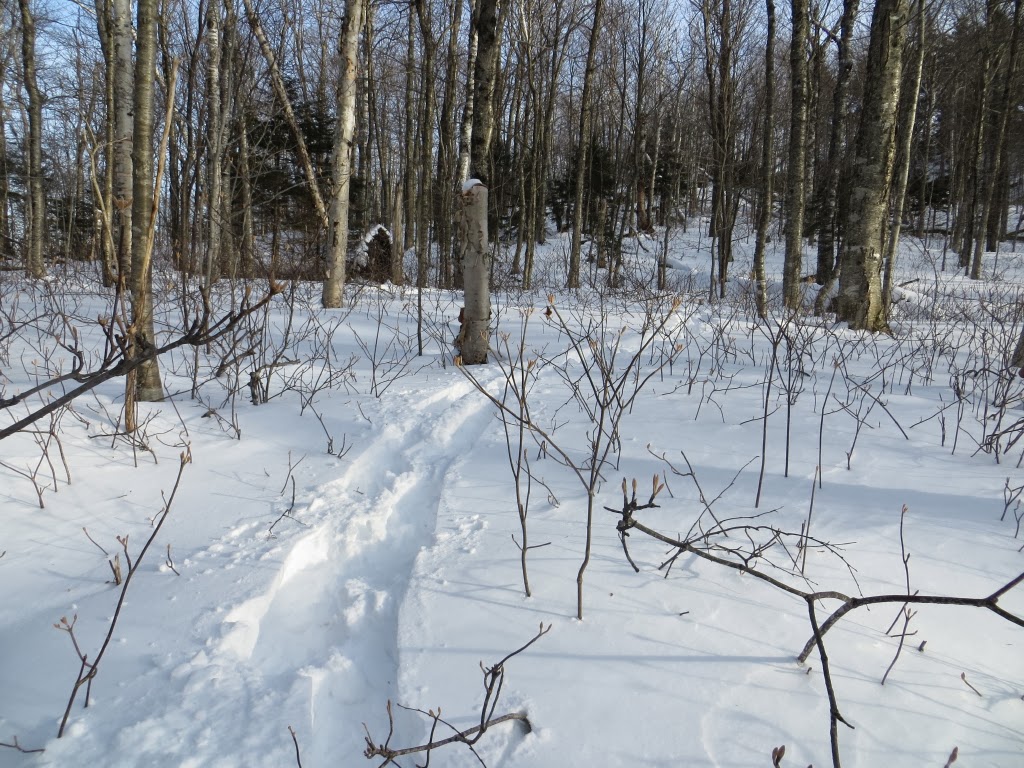 Looking up at some rockfall below the upper Monkey Cliffs. 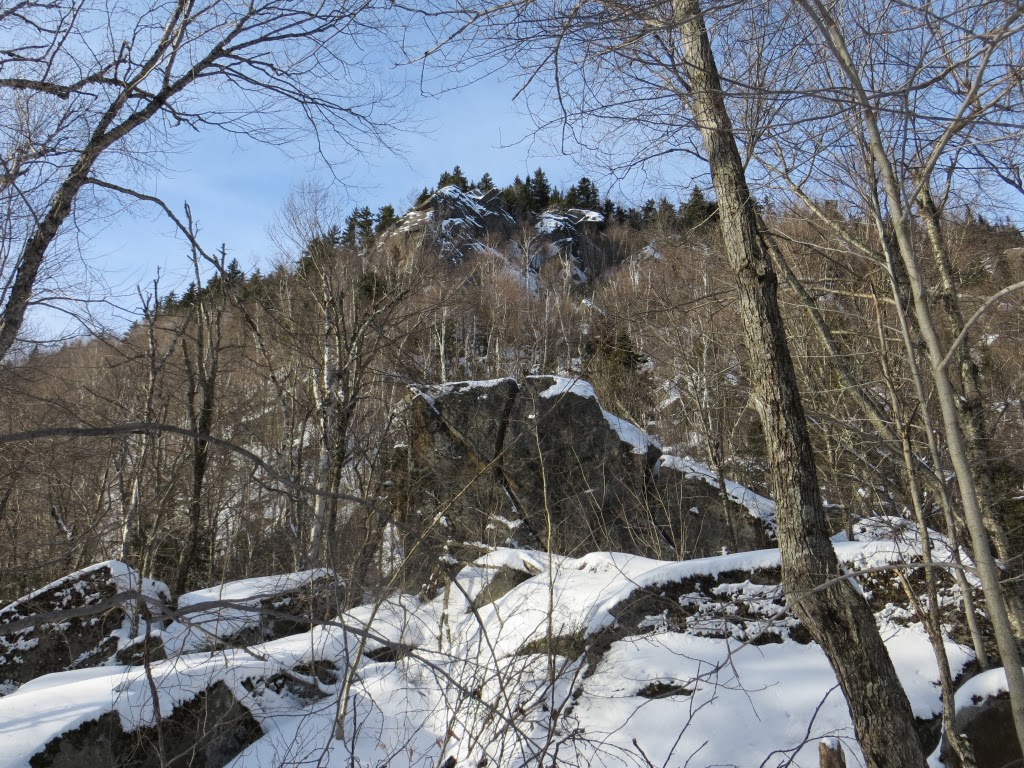 There are some cool perches up there, one of which is especially airy and requires a straddling maneuver to access. 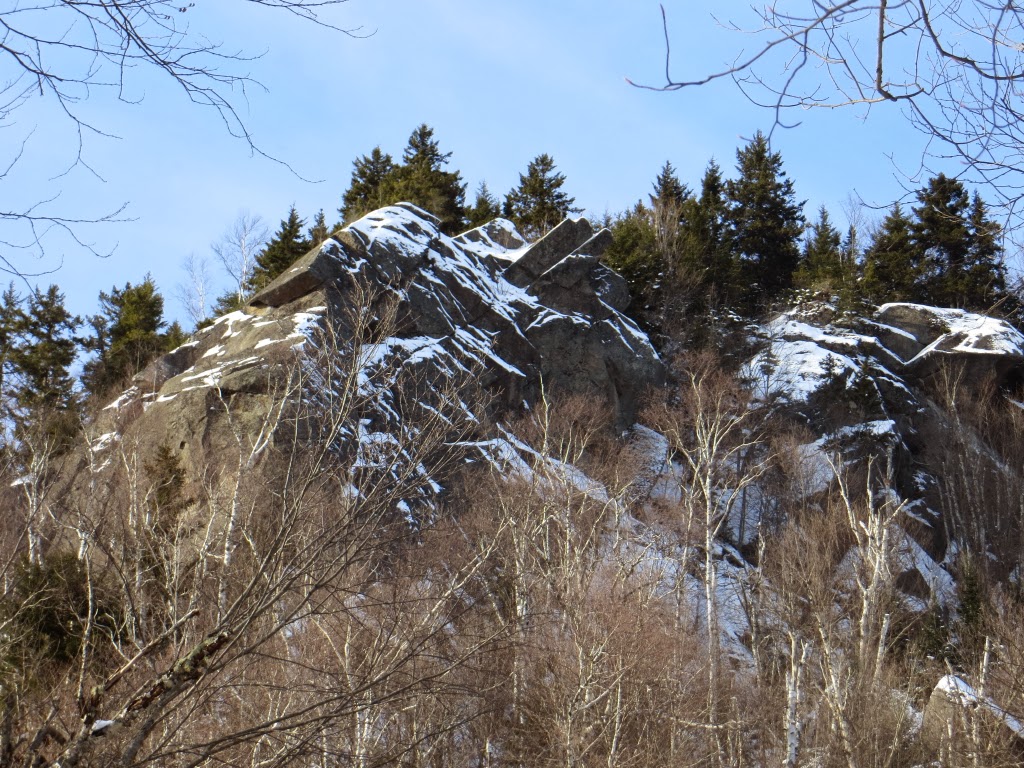 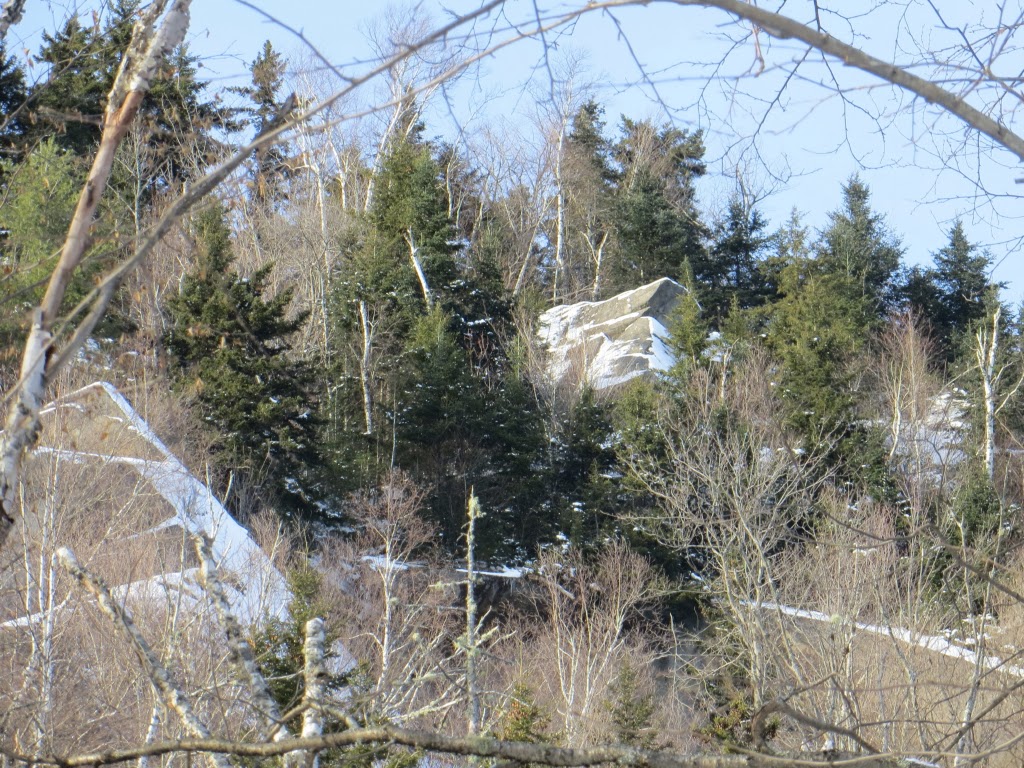 A lichen-crusted boulder at the base of the cliffs. 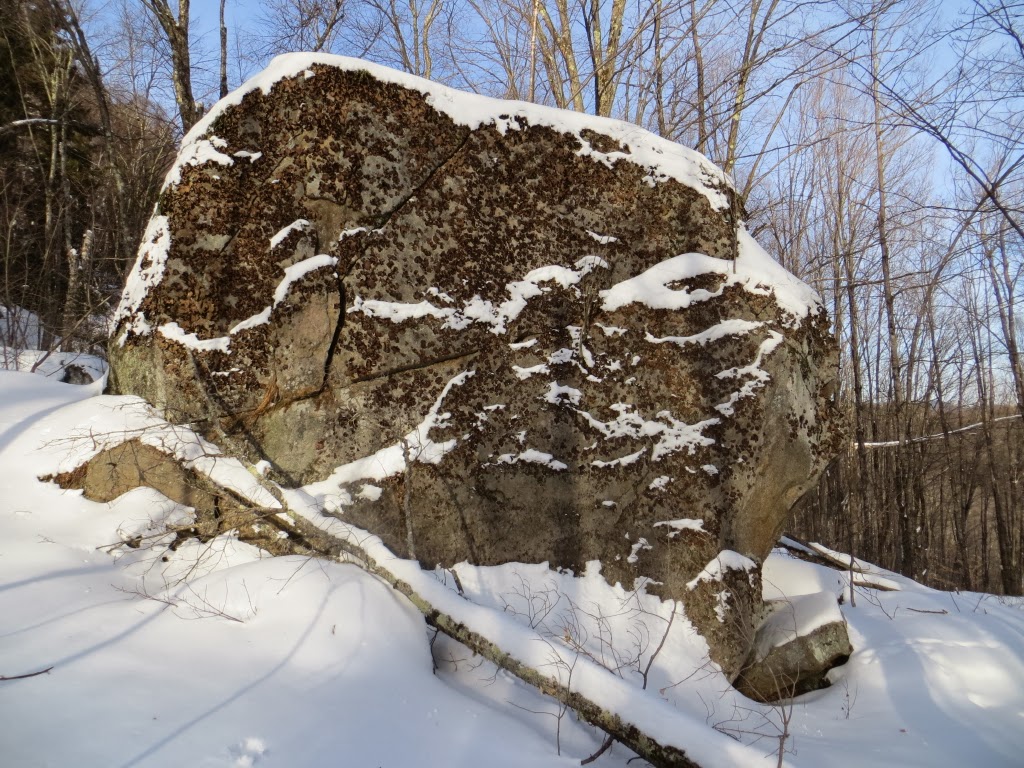 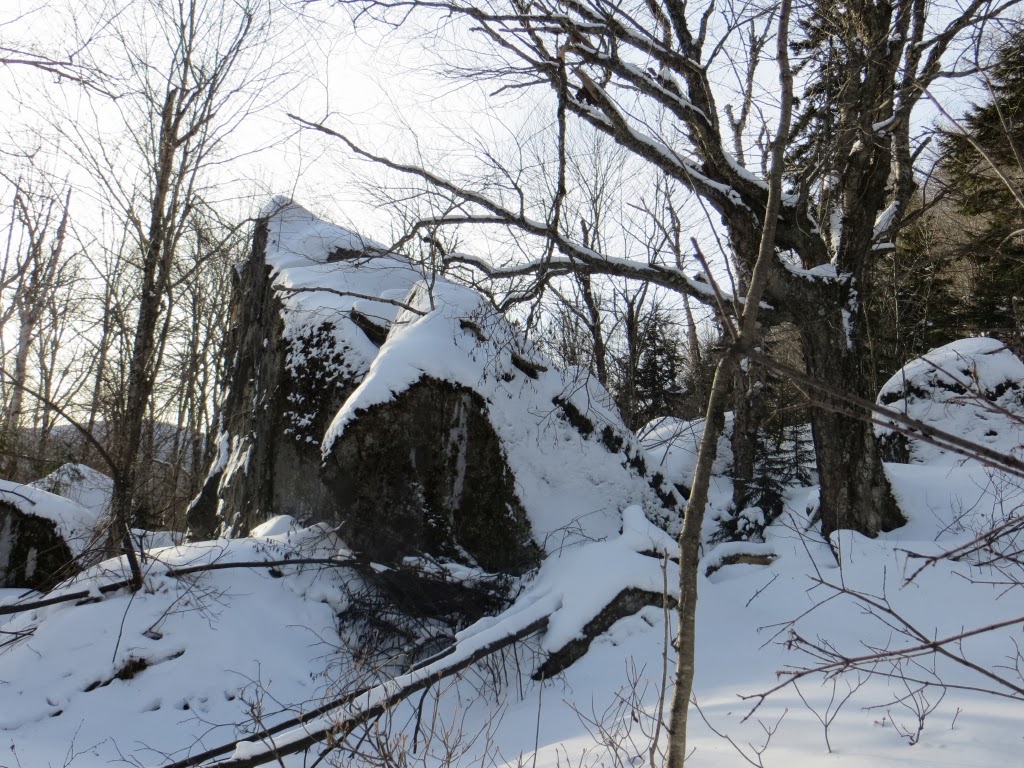 Open woods and deep (by this winter's standard) snow. 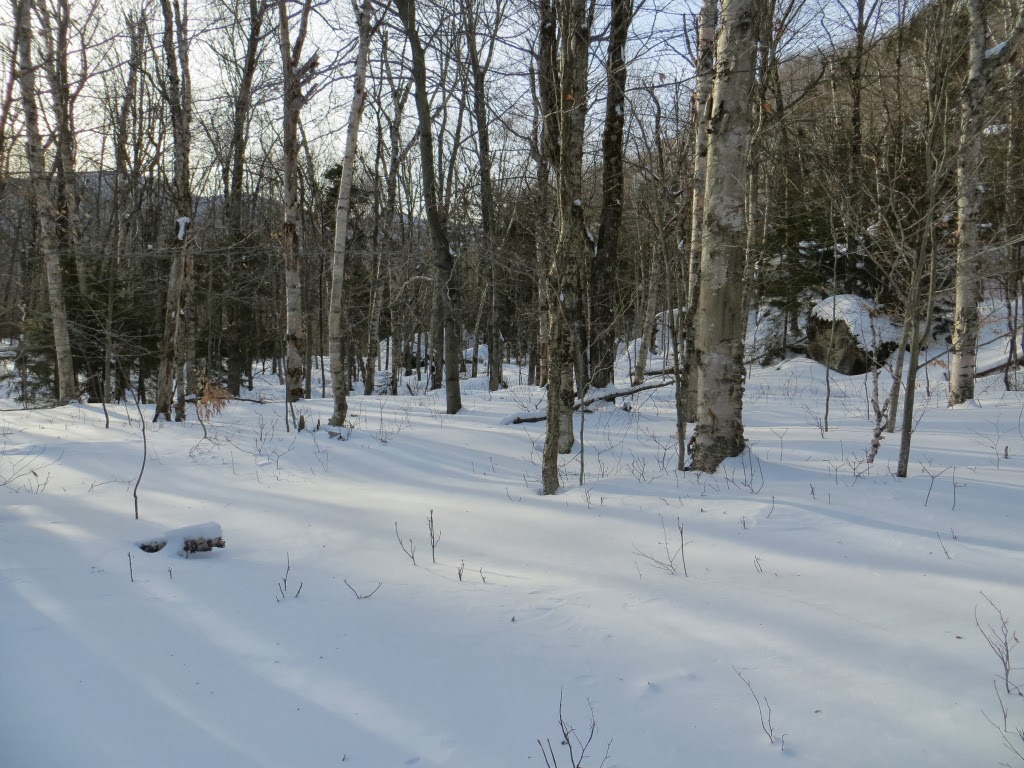 On the way down I revisited the west-facing ledge, which also has a view south to Mt. Cushman and Green Mountain. 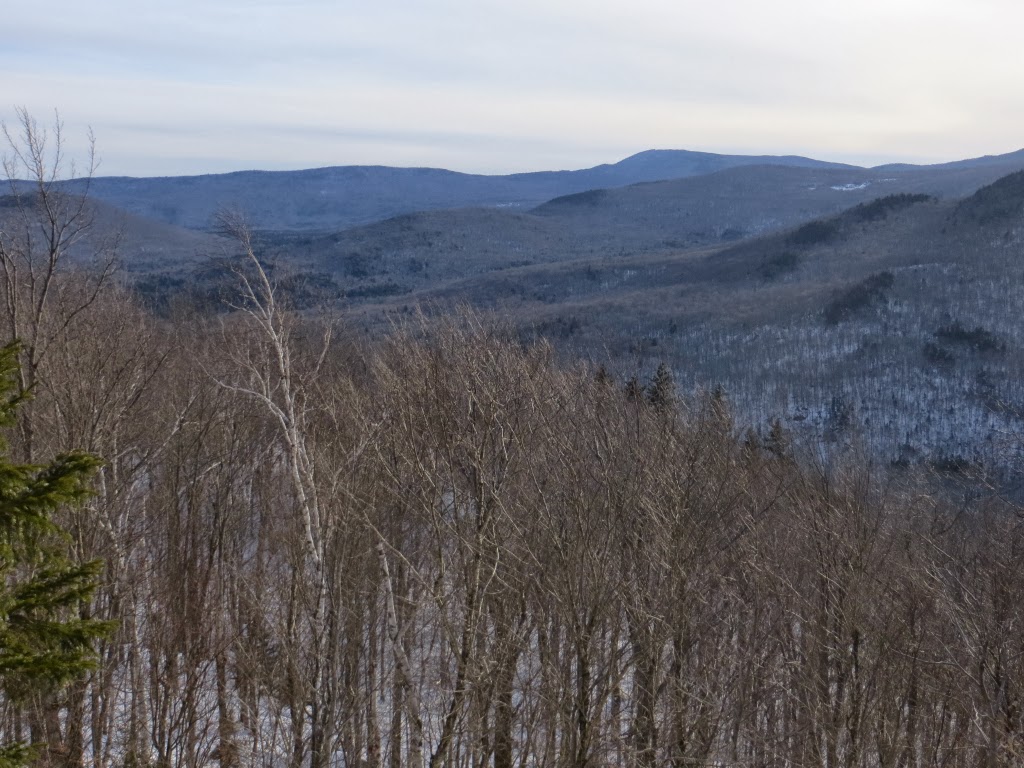 On the descent I worked my way out to a somewhat precarious lower ledge for a look at the lower Monkey Cliffs. 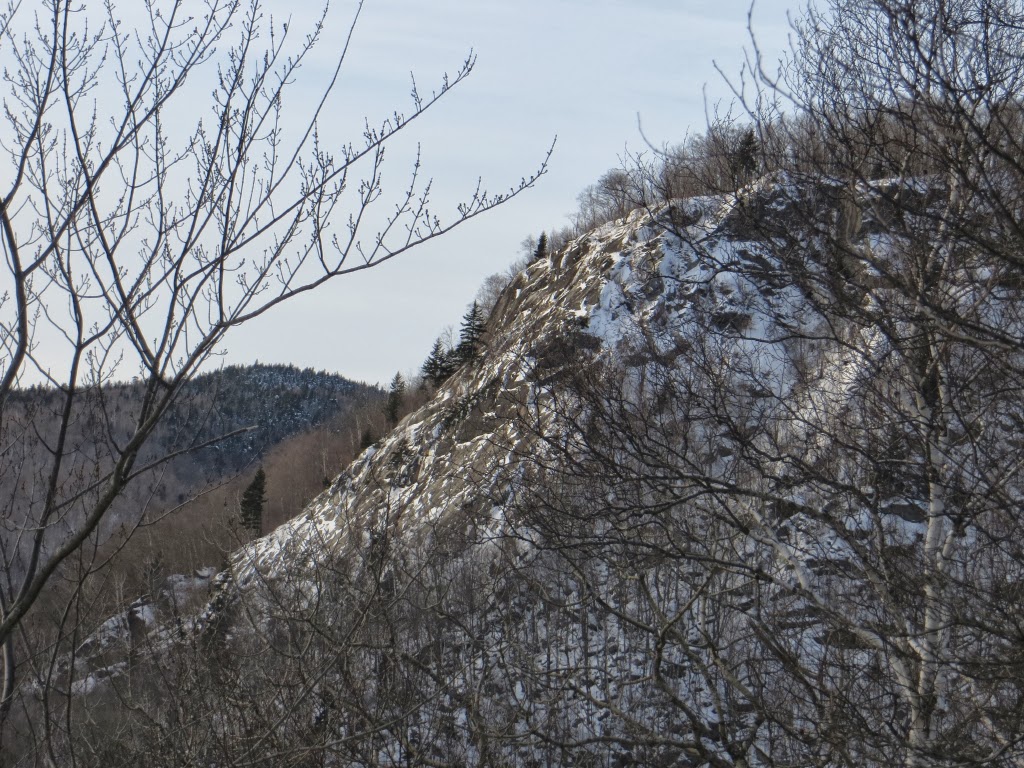 Across the valley I could see the "Luck of the Irish" climbing area. 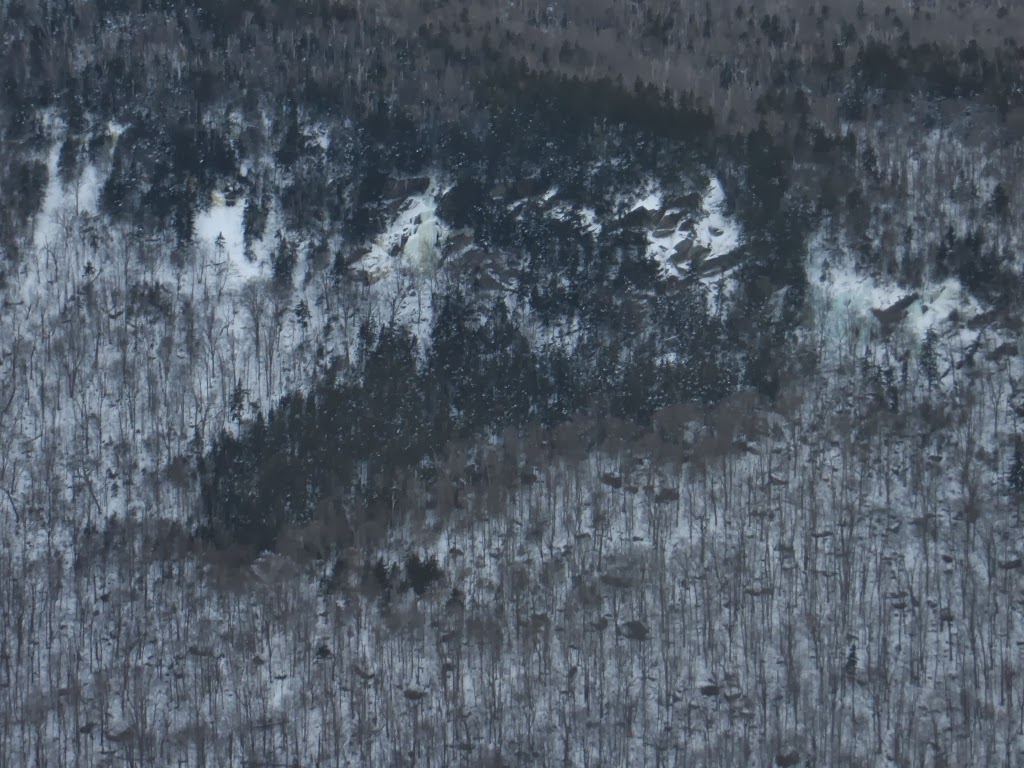 Last view of the day, Rt. 112 winding up towards Kinsman Notch. 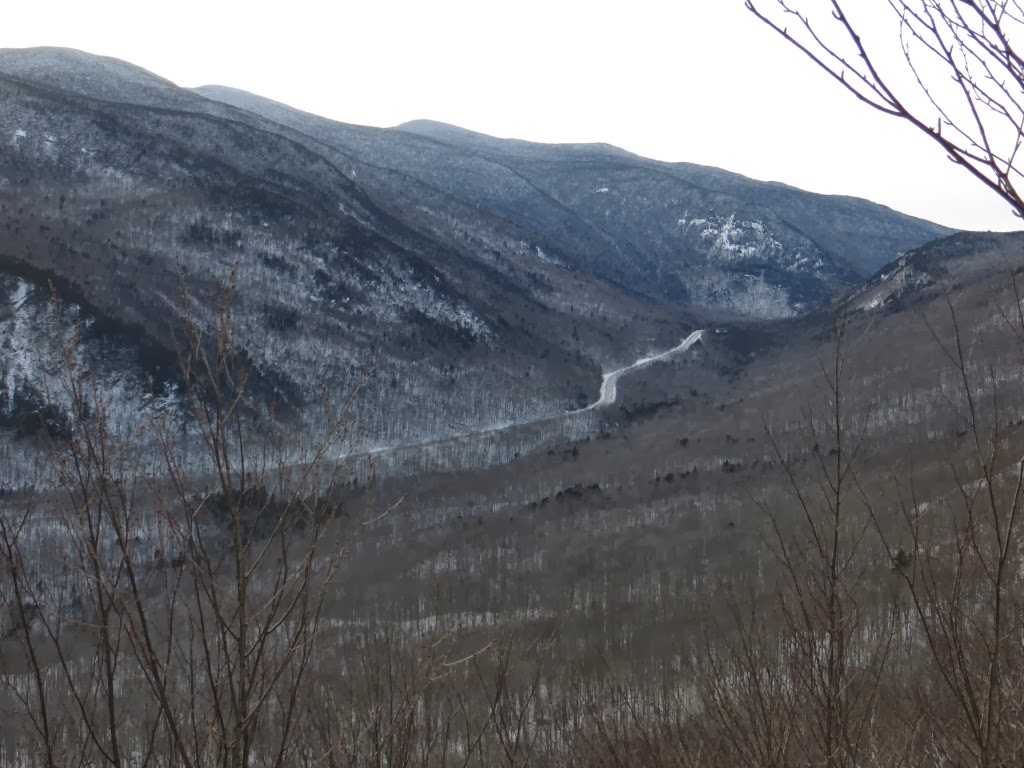