The Benton Range, the chain of interesting small rocky peaks on the western edge of the White Mountains, is one of my favorite destinations in late fall. On this partly sunny, chilly day, I returned to 2830-ft. Black Mountain, perhaps the best viewpoint on the range, and paid my first visit to its wooded northern neighbor, 2681-ft. Howe Hill.

I usually ascend Black via the Chippewa Trail from the SW, but today I opted for the easier northern route via the Black Mountain Trail. I chose to park at the end of the maintained section of Howe Hill Road and not drive the final rough 0.2 mi. to "designated" parking. You can park in front of the fence at the left, taking care not to block the homeowner's driveway. 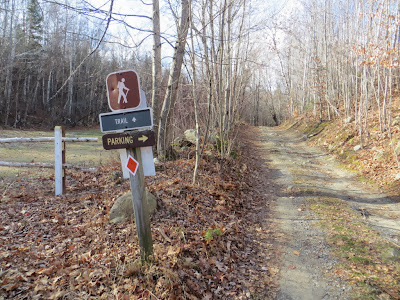 This is the small parking area you can drive to with a high-clearance vehicle. 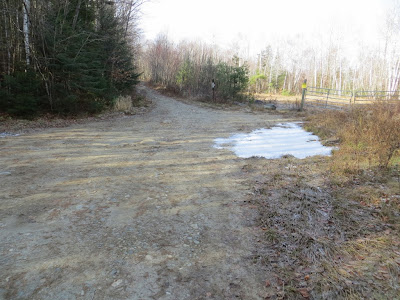 Trail sign at the parking area. The 2.4 mi. distance is actually from where I parked at the end of the good road. 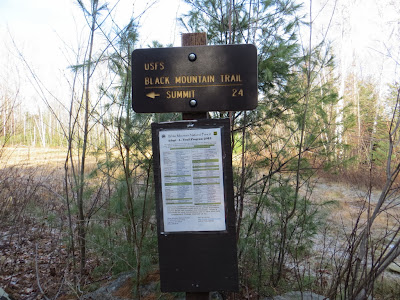 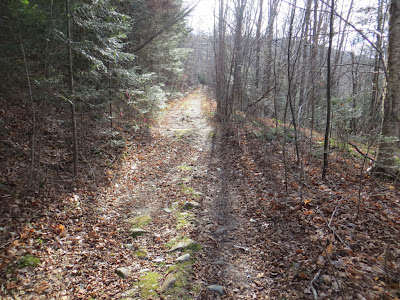 After the easy initial mile, the trail climbs steadily for a half-mile on the old tractor road that served the former fire tower on Black. The trail is well-maintained by my friends Joanne and Kevin Jones and offers unusually good footing for the Whites. 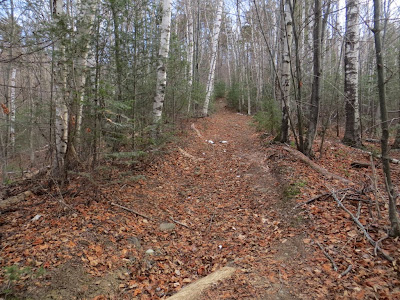 I encountered these two local residents - a cow and a young bull - half way up, and a third (another cow) just around the corner. I don't recall ever seeing three well-grown moose together before. 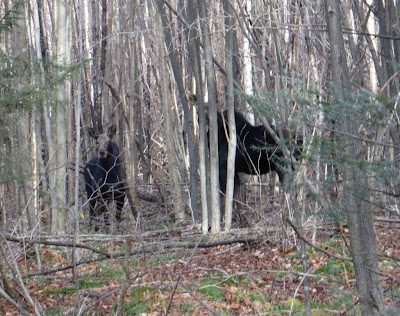 There is some wild spruce forest on the upper slopes of Black. 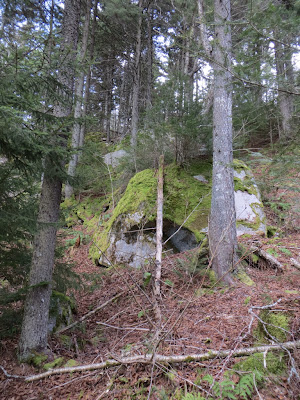 Ice flows - a familiar sight on November trails. Luckily they were not extensive on the Black Mountain Trail. 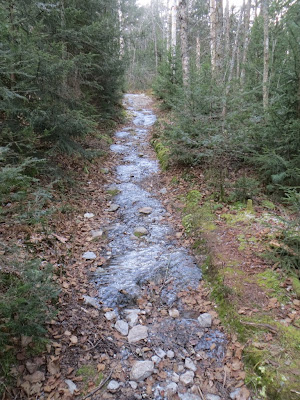 From the western ledges of Black you overlook a vast spread of the Connecticut River valley and the entire chain of the Green Mountains, from Stratton Mtn. in the south to the Jay Peaks near the Canadian border. The Mt. Washington Observatory reported 130-mi. visibility today. The farthest point I could identify was Mt. Snow in southern Vermont, more than 90 mi. away. Black is just not quite high enough to provide any glimpses of the Adirondacks. 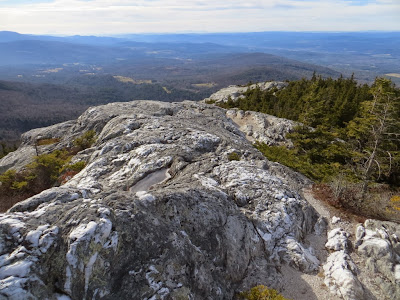 The Killington Range on the horizon. 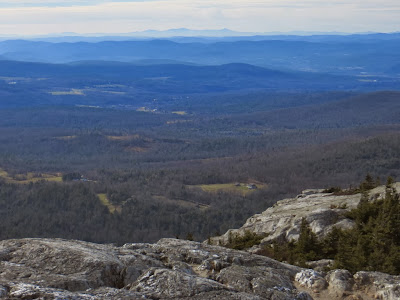 The fields of North Haverhill with the Signal Mountain range on the R and the long Abraham-Ellen ridge on the L. 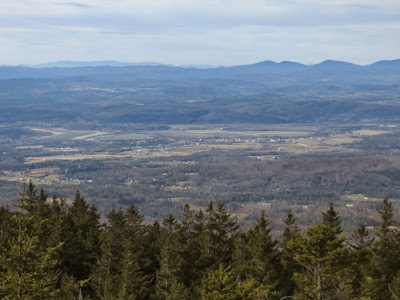 Looking south to nearby Sugarloaf Mtn. with Smarts, Cube and Piermont to its R. 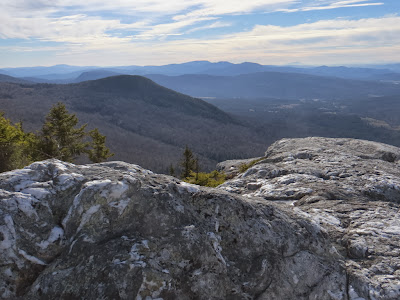 A closer look at Smarts-Cube-Piermont. 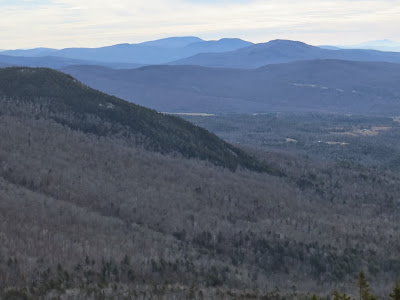 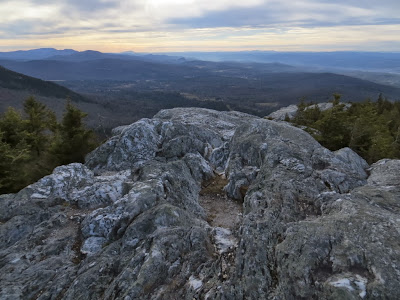 The summit ledge, made of heavily folded and contorted quartzite. Site of an active fire tower from 1911-1964. The tower was torn down in 1978. 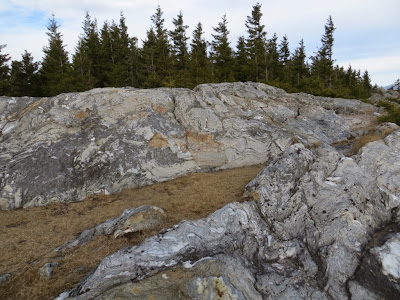 Holes and spikes from the old tower. 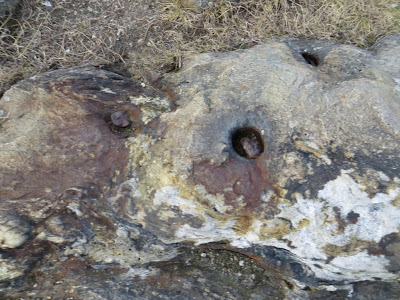 Looking down the Benton Range to Jeffers Mtn. and Sugarloaf. Mt. Cardigan is in the distance between them. 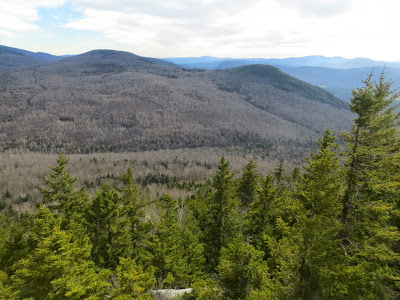 Tipping Rock on the E end of the summit, with Moosilauke beyond. Black has one of the best views of the Moose. 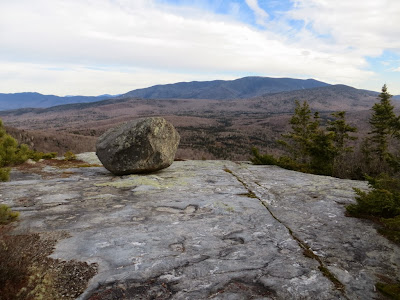 Another angle on Tipping Rock. 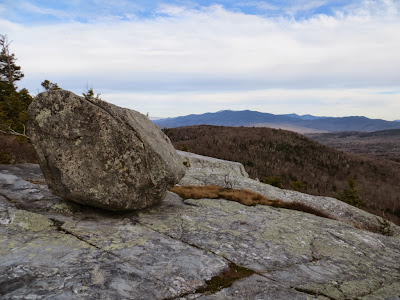 The Kinsmans with the Franconia Range behind, Howe Hill in foreground. 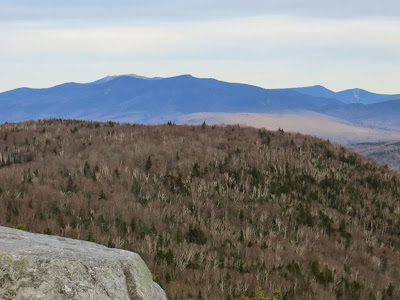 Looking NE to the distant Nash Stream mountains and the Pilot Range. 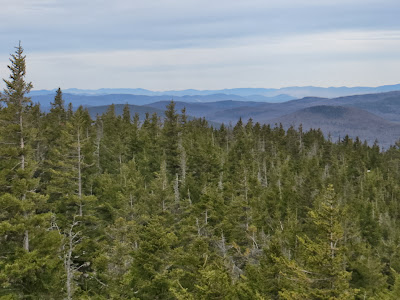 A sprawling upland rises to Mts. Clough and Moosilauke. 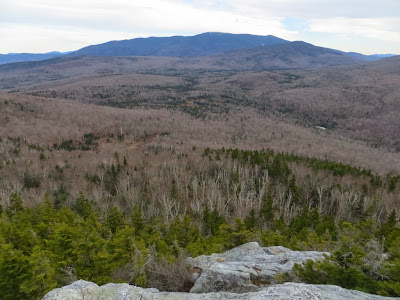 Benton or Tunnel Ravine, where I visited two slides in October, both of which provided a peek at Black Mountain. The 1973 slide can be seen on the middle of the L wall, and the bottom of the 2011 Irene slide can just be glimpsed as the R part of the "V" low down under the summit. 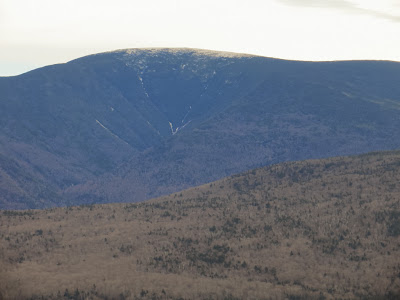 From the east ledges I made a rough and prickly bushwhack along the NE ridge of Black. By chance I stumbled upon what appeared to be the old fire warden's spring. In the 1940s the Howe Hill Trail ran along this ridge, and the guidebook description mentioned a spring 35 ft. from the trail. 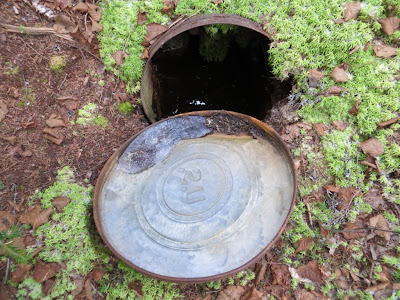 I was delighted to break out into these woods in the Black-Howe Hill col - beautiful open hardwoods like those found on many ridges in the Catskills. Similar woods can be found on the ridgecrest south of Jeffers Mtn. and on the south side of Chokecherry Hill on the south ridge of Moosilauke. 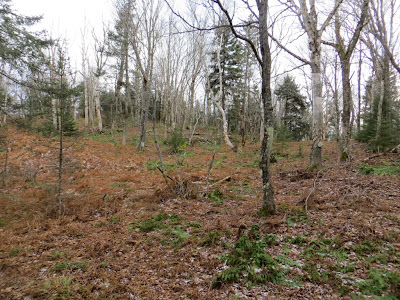 Some prickers, but only a minor hindrance. 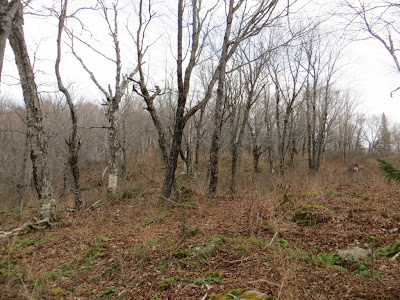 A peek back at Black. 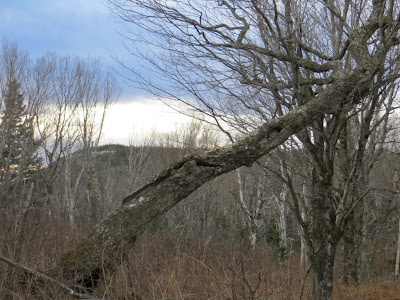 Near the little 2681-ft. summit knob of Howe Hill, a partial view of Moosilauke. 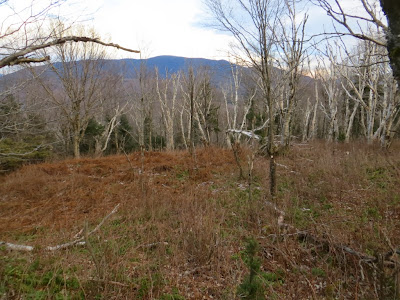 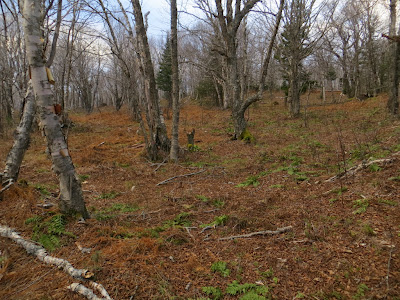 Click here for a detailed description of Black Mountain's history, trails and views. 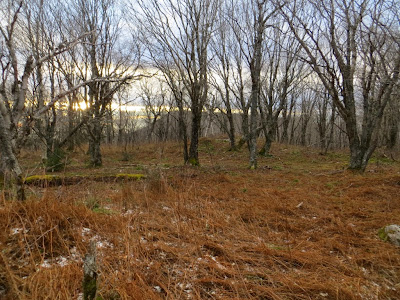