Headed south on a beautiful crisp late fall day to check some trails in this gem of a park, the finest wild area in southeastern New Hampshire. The main hike for the day was an eight-mile loop over South Mountain. I started out from the park entrance road on the Woronoco Trail, built by volunteers from the New England Mountain Bike Association and opened in 2005. The name is an Abenaki word for "winding about," and the trail does indeed meander into the center of the park with many twists and turns. 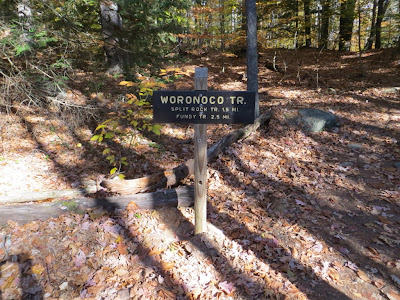 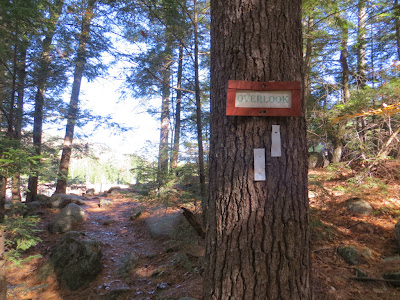 One of the nicest spots in the park, gazing across a vast marsh to cliff-dotted South Mountain. 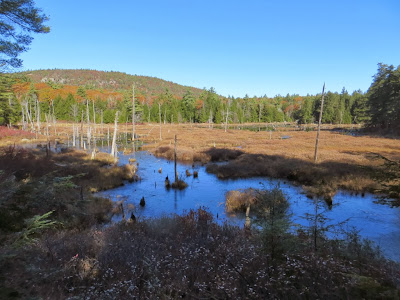 Zoom on the South Mountain cliffs. 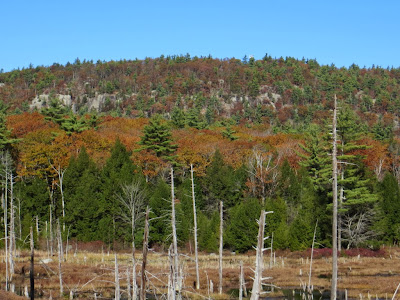 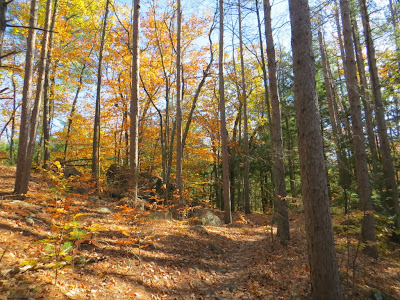 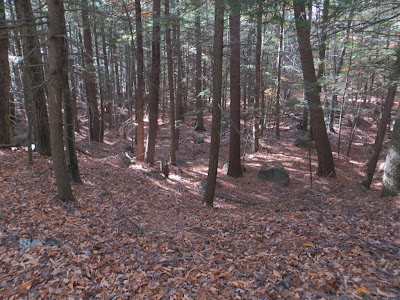 On to the Split Rock Trail, built by NEMBA in 2010. This route opens up some nice loop hike possibilities. 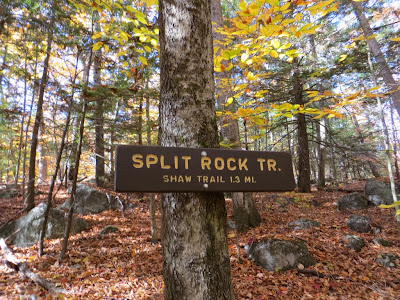 A split rock along the trail - one of several for which it could be named. 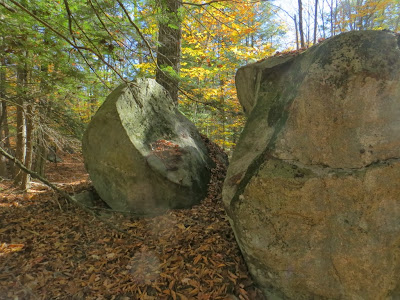 One of several large glacial erratics along the Split Rock Trail. 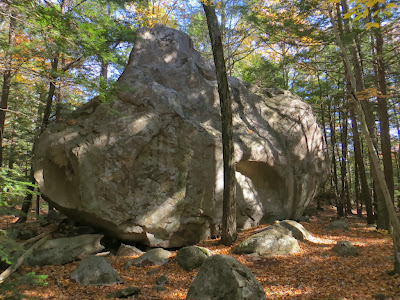 Pieces have calved off this rock on the other side. 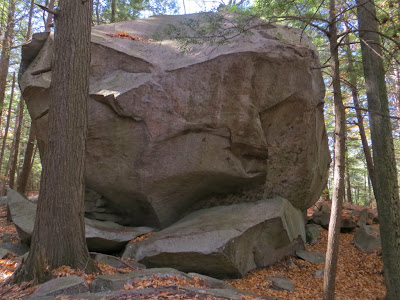 This towering monolith is the most impressive erratic along the trail.  Three stories high? 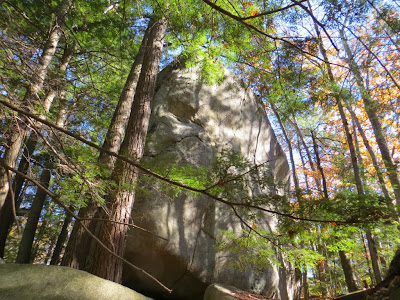 After traversing the Split Rock Trail, I followed the Shaw Trail westward to the South Ridge Trail. 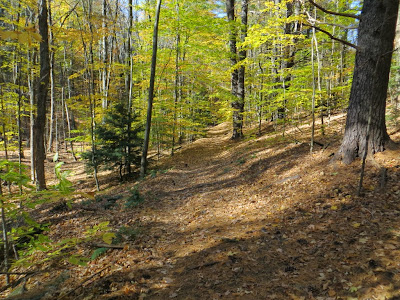 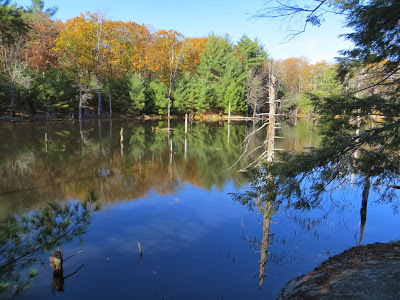 A rocky cleft along the ridgecrest. 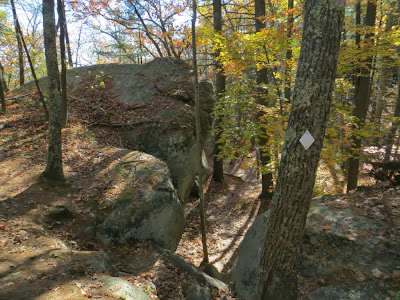 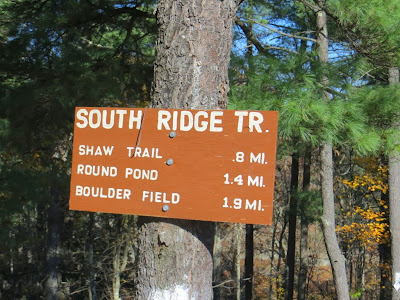 The fire tower on the 885-ft. summit of South Mountain. 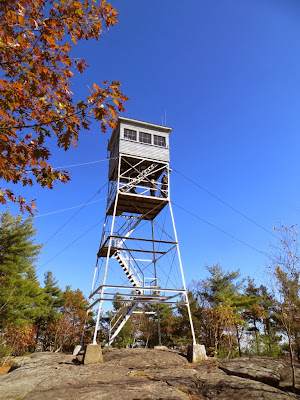 View of Middle Mountain and top of North Mountain from summit ledges. 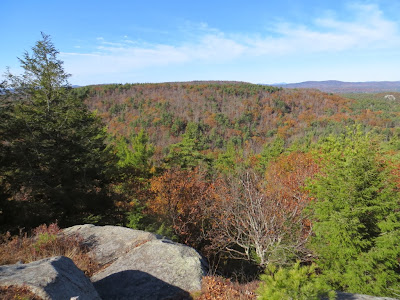 Mt. Kearsarge in the distance, with ledge on Middle Mountain in foreground. 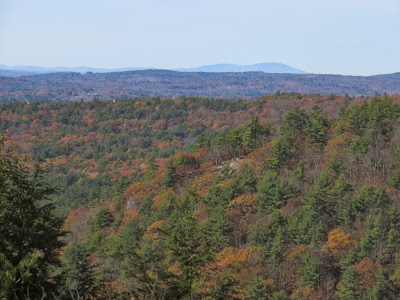 I followed an orange-blazed spur path down to a great sunny ledge with views south and east. There's surprisingly little evidence of civilization in the foreground part of this vista. 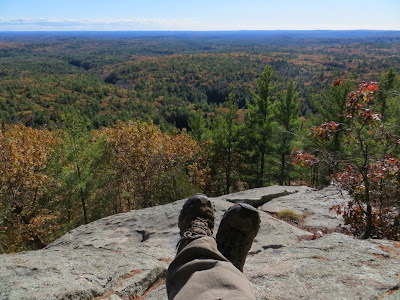 Pawtuckaway Lake, with the overlook marsh along the Woronoco Trail in the foreground. 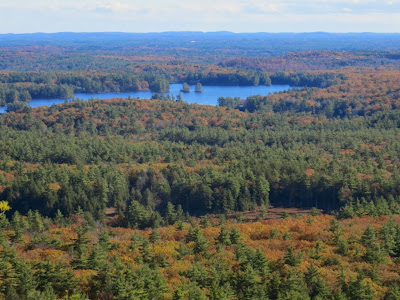 I bushwhacked down to the top of an impressive cliff. A tiny but rugged mountain. 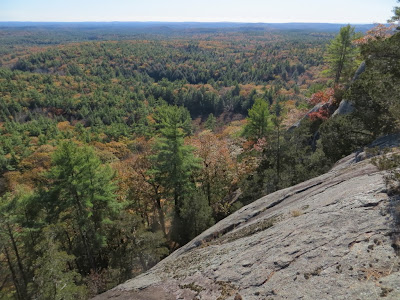 I headed back up to the summit and climbed to the top landing of the fire tower for a little better view of Middle and North Mountains. The Pawtuckaway Mountains are a classic semi-circular ring-dike of ancient volcanic origin. In addition to its interesting geologic features, the park is home to many wetlands and several unusual plant communities. There's a wealth of information in the Ecological Inventory of Pawtuckaway State Park. 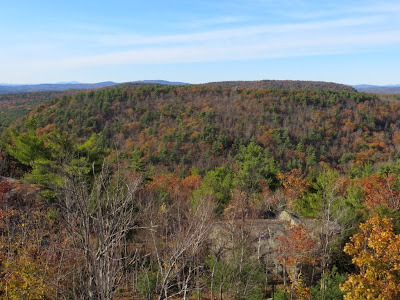 Looking west, the view from the tower includes the Pack Monadnocks and Mt. Monadnock seen beyond the Uncanoonucs. Also visible were the Hancock and Prudential buildings in downtown Boston - an appropriate sight the day before the Sox clinched the World Series! 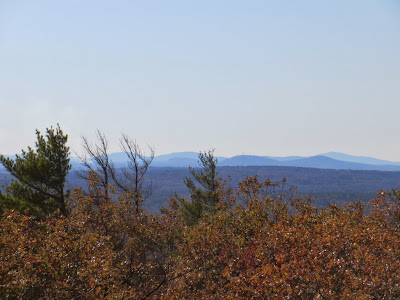 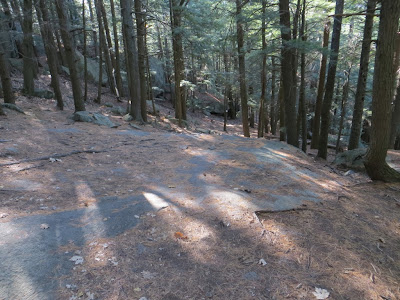 I returned to my car via the gentle woods road known as the Mountain Trail, passing along the shore of Mountain Pond just before reaching the road. 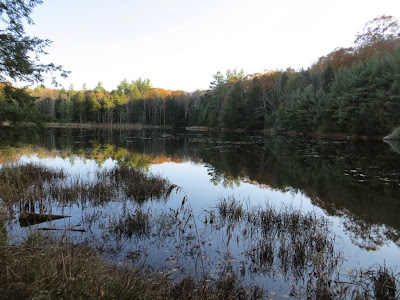 Before heading home, I walked a recently re-opened footpath on Big Island called the Big Loop Trail. This was mostly a 1.3 mi. woods walk, but one spur trail led down to a nice view of the south end of Burnham Marsh. 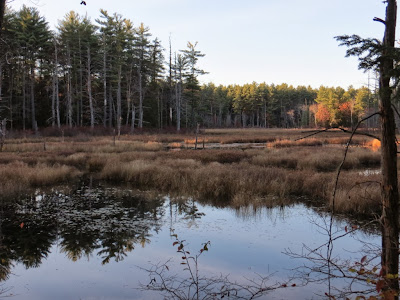 Another spur led out to the park beach on Pawtuckaway Lake. What a fine park - if we lived closer, we would spend a lot of time here. 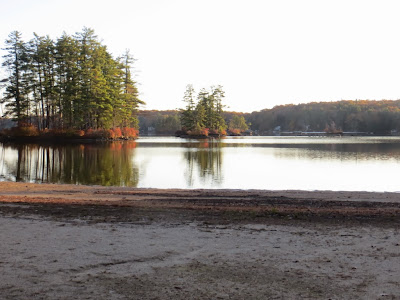