The second day of our mini-vacation dawned bright and clear. This would be our only full day in the Adirondacks, so we headed for Wright Peak (4580 ft.), one of the more moderate climbs among the 46 High Peaks. On the way in from Rt. 73 to the Adirondak Loj trailhead, we stopped to admire the classic view of Mt. Colden and the MacIntyre Range. Wright Peak can be seen at right-center, under towering Algonquin Peak and above little Mt. Jo. 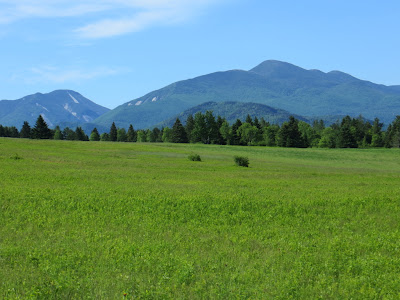 After paying our $10 parking fee and visiting the High Peaks Information Center (operated by the Adirondack Mountain Club), we set off on the Van Hoevenberg Trail, which is the main route to Mt. Marcy and provides access to the trails on the MacIntyre Range. We each took a small rock to place on the summit of Wright, for use by alpine stewards to delineate the trail. 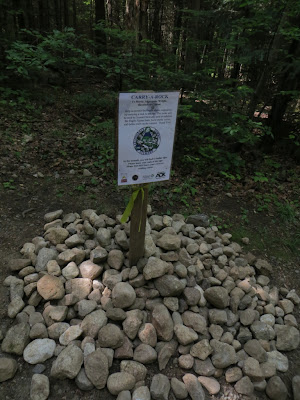 The first 1.2 mi. of the trail was at easy grades with good footing, descending a bit at first and then rising gradually, traversing Adirondack Mountain Club property for 0.8 mi., then entering the High Peaks Wilderness. 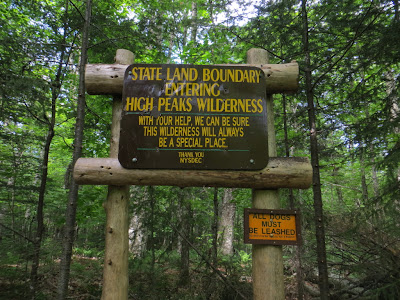 After turning off from the Van Hoevenberg Trail onto the trail to Algonquin, we soon encountered rougher and rockier footing, and this prevailed the rest of the way. Higher up were a few ledge scrambles such as this one. 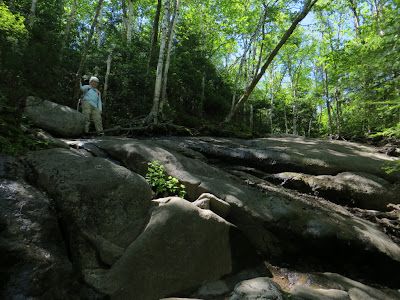 At 2.5 mi. we passed a cascade known as MacIntyre Falls. This spot reminded me of the Ammonoosuc Ravine Trail. 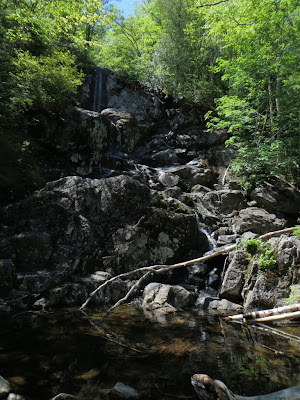 Above here we picked our way up a very rough and rocky stretch, like the Tripoli Rd. end of the Mt. Osceola Trail on steroids. 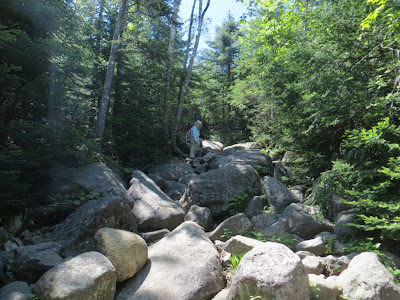 It seemed like a long 3.4 mi. to the junction with the side trail to Wright Peak. These are "Adirondack miles." 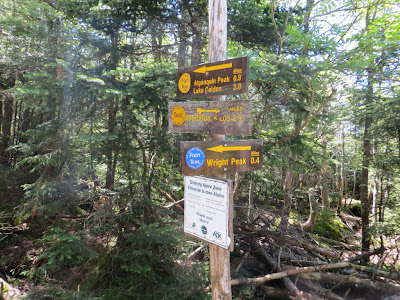 After scrambling up ledge slabs for a quarter-mile through scrubby conifer woods, we emerged above treeline at 4300 ft. 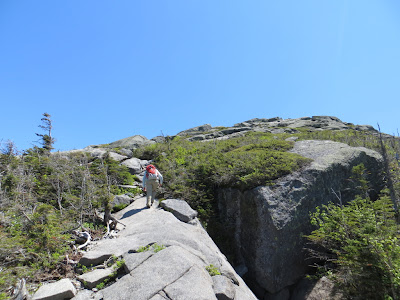 Carol led the way on the steep climb up open ledge slabs. 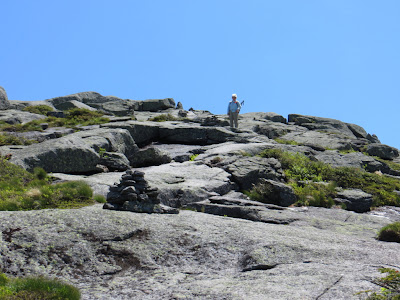 Still going up - what a great summit, with perfect weather! The first time I climbed Wright, in April 1984 with my buddy Harry Cunningham, we almost got blown off the peak by fierce winds with temps in the 20s. Today we had warm sun, low humidity, a light breeze, and very few bugs. 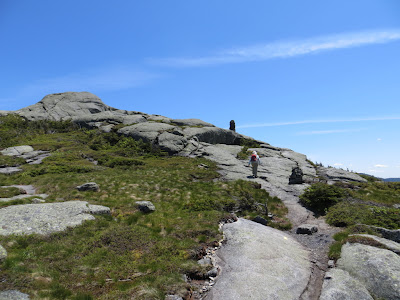 Great view looking back to the west at the Seward Range, with MacNaughton Mountain in the foreground on the L. 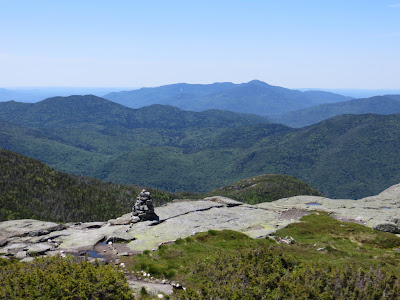 At the summit, the full 360-degree panorama opened up, with 33 of the other 45 High Peaks visible. This view looks east beyond Table Top Mountain to Giant Mountain, Rocky Peak Ridge and the Great Range. 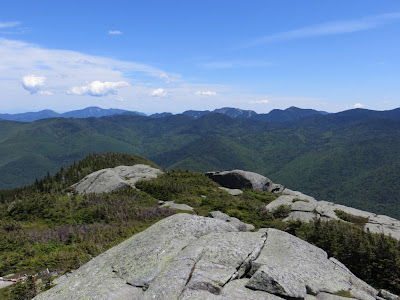 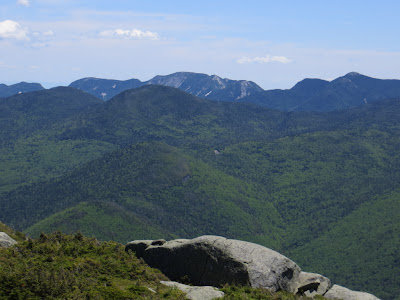 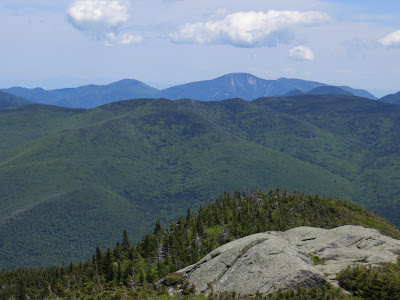 An impressive close-up of Algonquin Peak (5114 ft.), second-highest in the 'daks after Marcy. 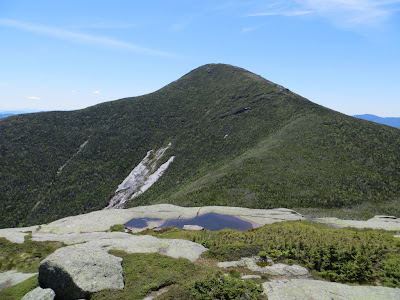 View north beyond Heart Lake and Mt. Jo to the village of Lake Placid (L), Whiteface Mountain (center) and the Sentinel Range (R) 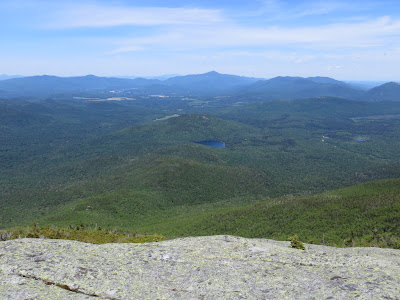 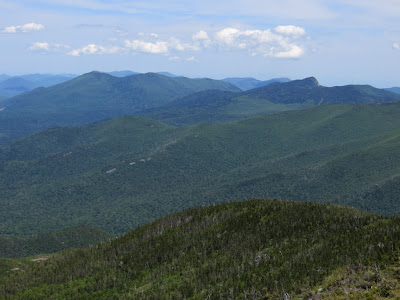 Most impressive of all, the view across Avalanche Pass to the awesome slides on Mt. Colden, which the Indians of the Adirondack region called "Ounowarlah," or "Scalp Mountain." The large, bright slide in the center, as well as the thin one second from left, fell during Tropical Storm Irene in 2011. The slide on the far left came down during Hurricane Floyd in 1999. 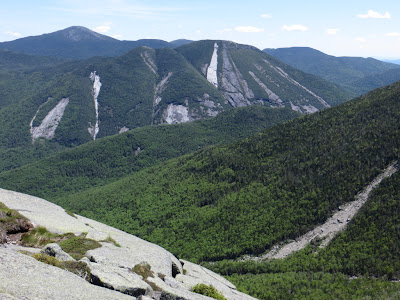 One of the relatively few hikers we saw today was kind enough to take a summit picture of us. 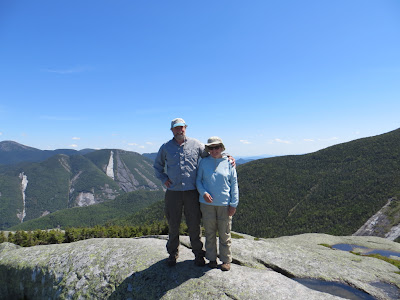 Carol and I took turns checking out the site of a tragic USAF bomber crash just below the summit in 1962. 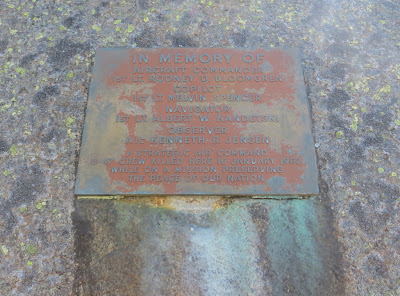 Debris from the crash is scattered amidst the ledges. 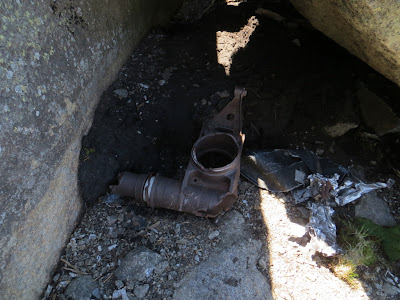 Carol pauses by a large cairn as we descend off the peak. 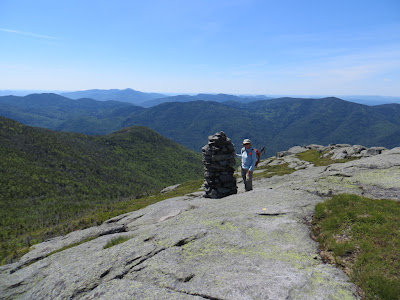 Lots of crampon marks on a ledge down below treeline. 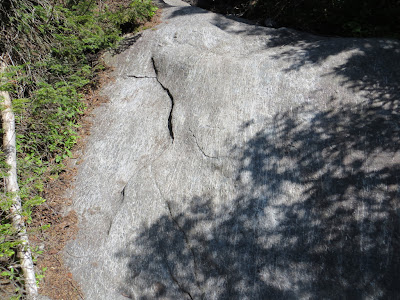 A prominent cliffy knob on the west side of the Algonquin trail. 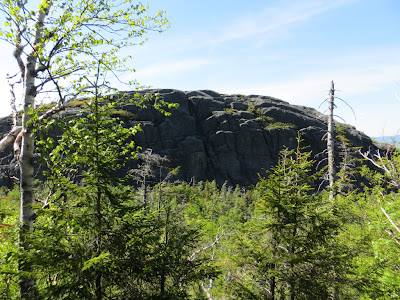 At MacIntyre Falls we chatted with Patrick, an ADK Summit Steward from Utica, NY, who had been on duty atop Algonquin that day. He said there were, surprisingly, only 17 hikers on Algonquin during this gorgeous midweek day. We, too, were surprised at the lack of hiker traffic; we figured there would have been 100+ people climbing Lafayette this day. No complaints, though - for our two-hour summit stay, we had the views to ourselves for all but about 20 minutes. It was a fine day to be in the High Peaks! 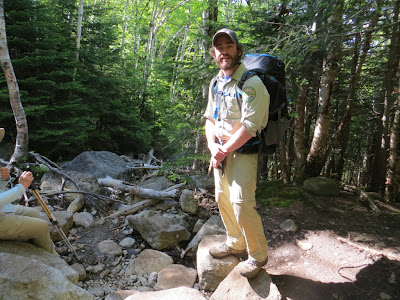