I chose a fine spring day for an exploration in the wooded glacial cirque known as The Bowl, a deep pocket of the Sandwich Range tucked between Mt. Whiteface, Mt. Passaconaway and Mt. Wonalancet. Research has indicated that there are no signs of this valley ever having been logged (more specifically, the main or west branch of Wonalancet Brook; the valley of the east branch did see some early logging). It was saved from lumbering about 1915 through the efforts of Katherine Sleeper and other members of the Wonalancet Out Door Club. The land was then added to the White Mountain National Forest, and in 1931 much of the western valley was designated as a 510-acre Natural Area. In the 2006 Forest Plan, what is now called The Bowl Research Natural Area was expanded to over 1500 acres.

One of the outstanding features of The Bowl is the extensive stand of old-growth hardwood on its broad floor, a rarity in the White Mountains. (Most of the old-growth spruce and fir on the walls of the cirque were destroyed by hurricanes and other natural catastrophes.) The vegetation and ecology of the valley have been intensively studied over the years, and serve as a valuable reference to compare with the primarily second-growth forests of the region. Aside from its scientific value, The Bowl is a very beautiful and special place. Though there are no trails penetrating deep into the valley, samples of the magnificent old hardwood forest can be seen on the lower Tom Wiggin Trail and the middle of Dicey's Mill Trail. There are good views down into The Bowl from outlooks on the Blueberry Ledge Trail and Rollins Trail.

I had made off-trail visits into The Bowl five times previously, always in winter, as shown in the photo below taken from a ledge partway up the side of the valley. This would be my first visit in summer. I wanted to see the old growth hardwoods in their late spring finery, and then bushwhack up to a slide on the flank of Mt. Whiteface for a view. 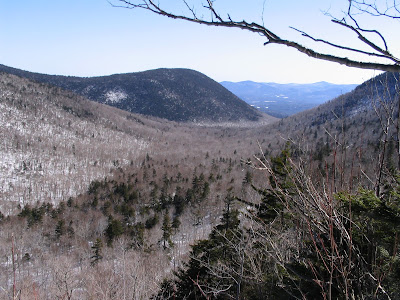 The fields of Ferncroft were lush and green on this warm spring morning, and with binoculars I watched two singing Bobolinks hovering above the grass. 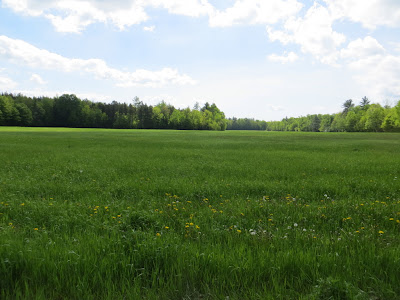 The WODC"Trail Tending" tool trailer was parked beside the information kiosk. The WODC does a great job on maintaining their 52 miles of trails, and in general keeping an eye on the Sandwich Range Wilderness. They also publish a great trail map. Visit them at www.wodc.org. 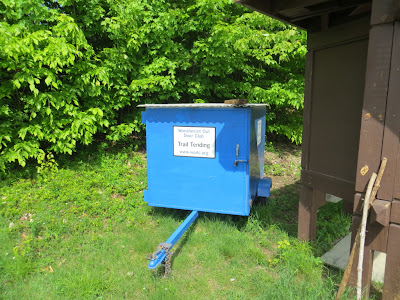 The view of Mt. Whiteface and the Wonalancet Range along Ferncroft Rd. Is there a more idyllic setting in New Hampshire? 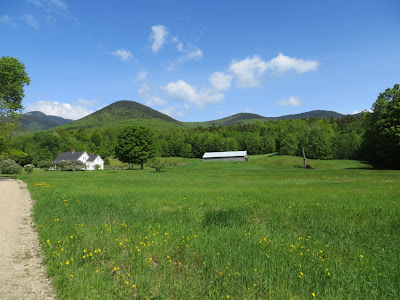 The two-mile approach on the Dicey's Mill Trail is a pleasant woodland walk, with just one stretch of moderate climbing on the "S-curve." 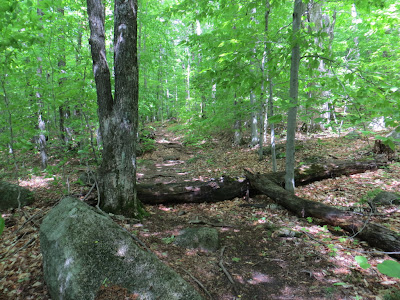 This part of the trail has mostly excellent footing. 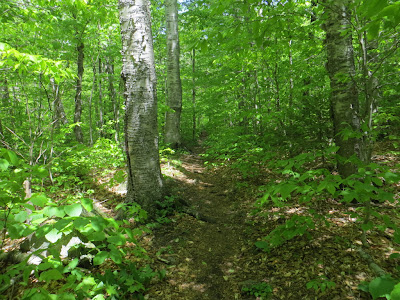 I left the trail and crossed the east branch of Wonalancet Brook (also known as the Wonalancet River). 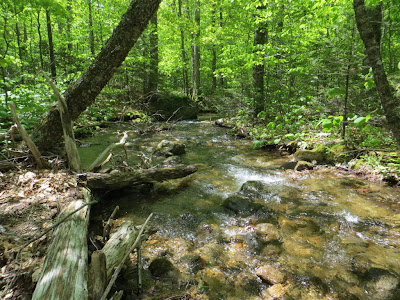 There's no shortage of hobblebush in the valley. 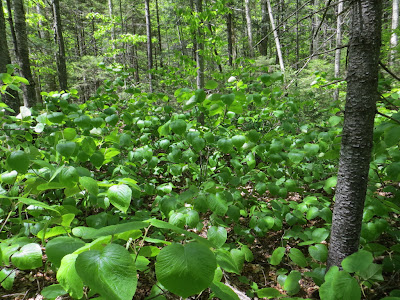 A first look at the main branch of Wonalancet Brook. 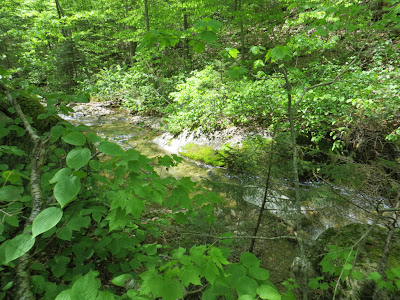 Here there be giants...at least by White Mountain standards. Some of the sugar maples in the valley could be as old as 250 years. 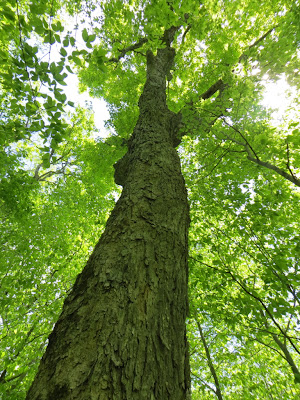 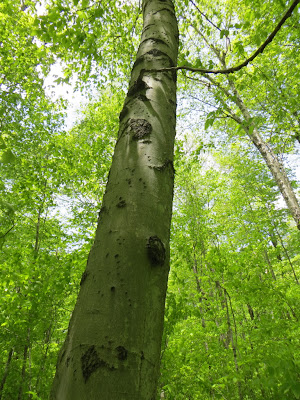 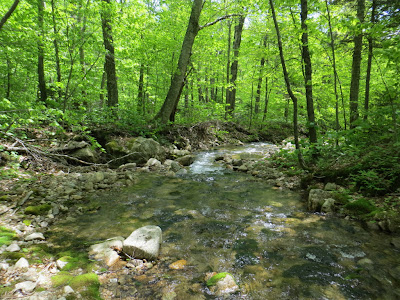 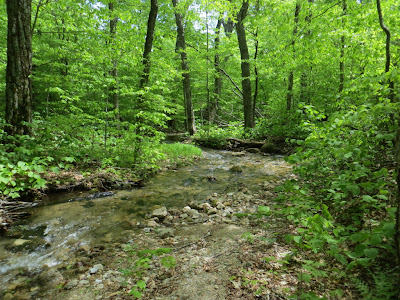 I came upon several outstanding sugar maple glades while wandering a bit around the floor of the valley. 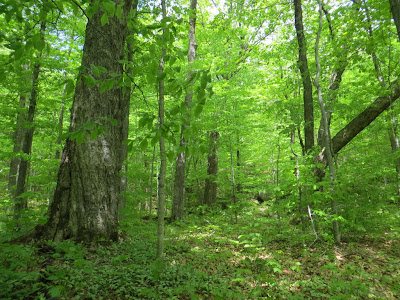 These old maples were surrounded by Trout Lily leaves, well past their flowering stage. 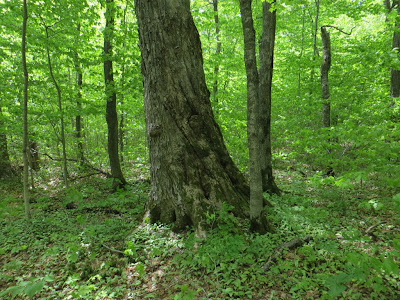 While searching for the brook that would lead me up to the slide - which took a while, with a couple of false starts - I passed this open seep which I suspect harbors some unusual vegetation. Near here was an extensive colony of either Dutchman's Breeches or the rarer Squirrel Corn, both of which occur in nutrient-rich hardwood forest; their leaves are quite similar and there were no flowers. One of the more in-depth studies done here, Botanical Reconnaissance of The Bowl Research Natural Area, by Lee E. Carbonneau and Sarah D. Allen (1995), recorded no Dutchman's Breeches in the sample plots and only 6-8 individuals of Squirrel Corn. As a rule, I try to tread as carefully as possible with regard to plant life when bushwhacking, even more so in The Bowl. Obviously, marked research sites should be avoided, though I have never seen one here. 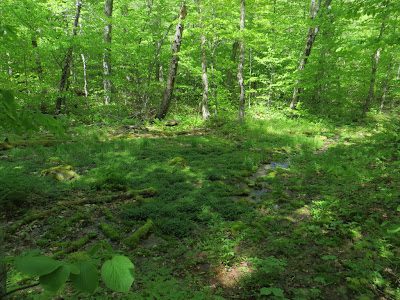 I eventually found the correct brook, which looked suitably "slide-y." 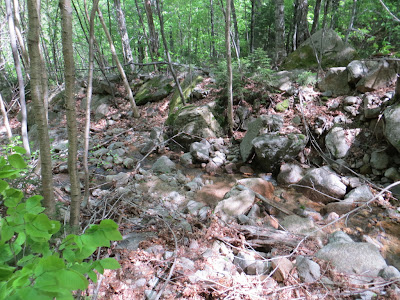 After some steep and thick bushwhacking - no surprise there - I reached the bottom of the open part of the slide. 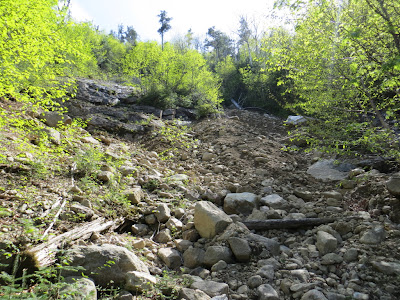 I scrambled up to the open ledgy area on the upper part of this fairly small slide, and found the view I was seeking - across The Bowl to Mt. Passaconaway and the ridges flanking it on either side. On the left were the wild humps of the Rollins Trail ridge. 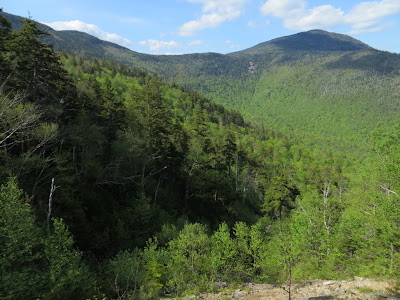 On the right were Passaconaway's eastern spurs, Nanamocomuck and Wonalancet Hedgehog. 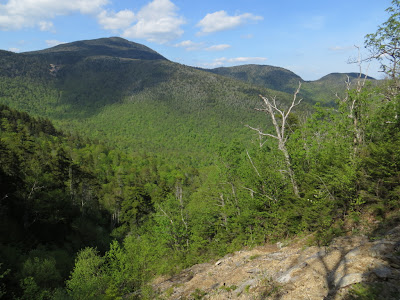 Passaconaway is a mighty peak when viewed from below. The steep headwall of The Bowl is wooded except for one set of wild granite slabs. 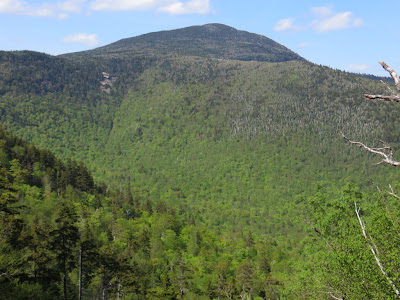 Near the top of the slide was a shelf suitable for reclining. 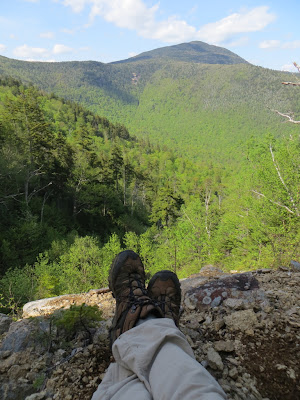 The  top of the slide. 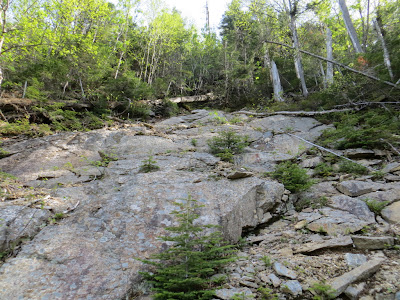 One of the steeper slabs. 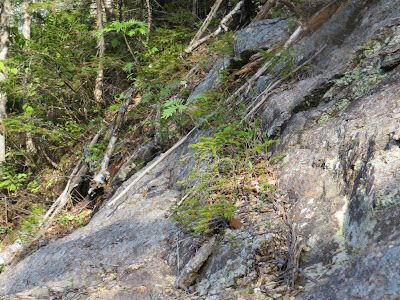 Looking down the slide. 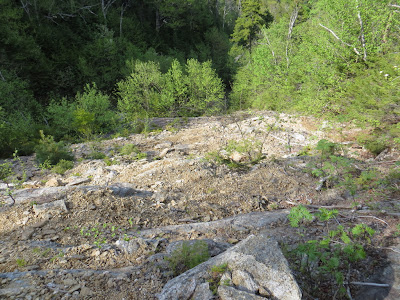 Revegetation is slowly underway. By looking at aerial photos, I figured that this open part of the slide fell between 1972 and 1992. The long runout of jumbled rocks below along the brook is probably older. 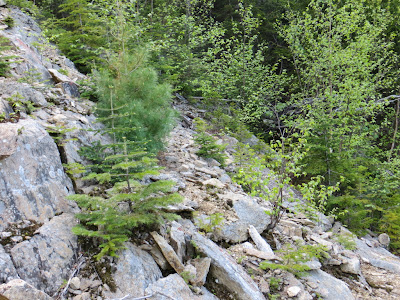 In the woods lining the steep slopes near the slide, there were many  weathered trunks of large old spruce blowdowns. 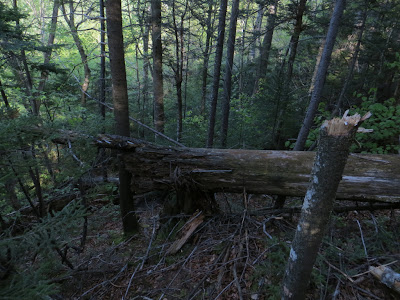 On my down-bound route I went through a long stretch of uninviting woods. 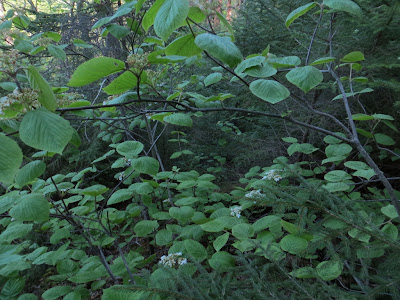 The woods became more inviting as I approached the floor of the valley. Despite the swarms of black flies and some extended hobblebush wrestling matches, it was a wonderful day spent exploring one of my favorite nooks in the Whites. 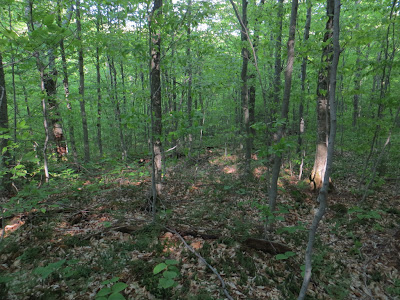