I hadn't been up this interesting 2609-ft. peak in the Benton Range in a long time. It fit the bill for a potentially snow-free hike with good views. The thought of ascending the ropes and ladders on the wickedly steep old unofficial trail did not appeal, so I opted for a bushwhack from the north, starting from the lower part of Black Mountain's Chippewa Trail. Photos taken from Black in early spring showed mostly open hardwoods on the north slope of Sugarloaf, so it promised to be a good route.

In his classic 1876 guidebook, The White Mountains: A Handbook for Travelers, Moses Sweetser was impressed with Sugarloaf:
"Sugar Loaf is to the W. slope of the mountains what Chocorua is on the E. and the Percy Peaks are on the N., -- a sharp and conspicuous peak of light colored rock, alpine in appearance, and easily recognized from a great distance. Although its height is but 2,565 ft., it will probably be a favorite point of attack when alpine exercise becomes popular in New England, on account of the fascination of its defiant cliffs, the exciting perils of the ascent, and the beautiful view from the summit."


After a short descent from the trailhead on Lime Kiln Rd., Chippewa Trail passes a beaver pond with a good view of Sugarloaf. 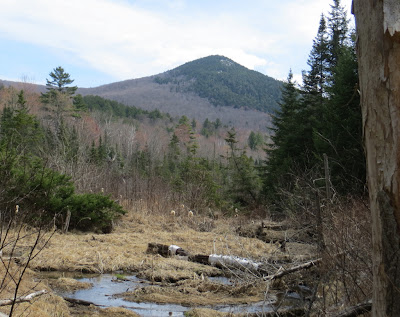 The trail crosses a brook near the pond on this huge old weathered log. An alternate crossing uses an old beaver dam. The trail soon passes into a land parcel owned by the Society for the Protection of NH Forests, open to the public for day use. 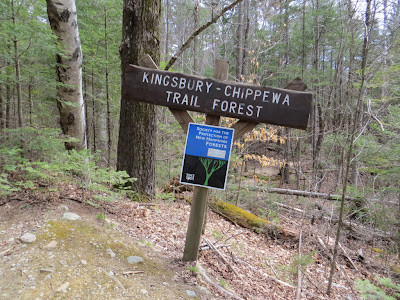 From an old cellar hole, I followed an abandoned woods road across the slope and bushwhacked down to cross Titus Brook, which drains the valley between Black Mountain and Sugarloaf. 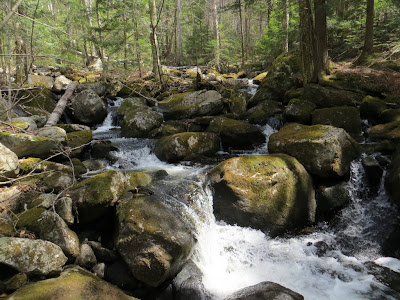 On the far side of Titus Brook I started whacking up the north slope of Sugarloaf, crossing this tributary a little ways up. 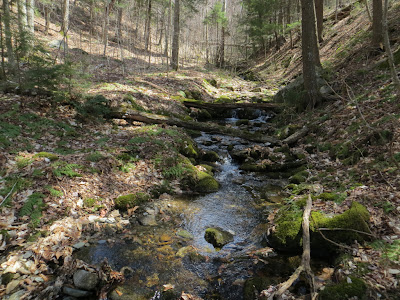 As expected, most of this slope was cloaked in northern hardwoods, making for enjoyable whacking. This stand almost made me feel like I was back in the Catskills. Trout lilies and Dutchman's breeches were leafing out, though flower buds were still mostly a few days away. Parts of this slope must be a "rich woods community" if Dutchman's Breeches are present. 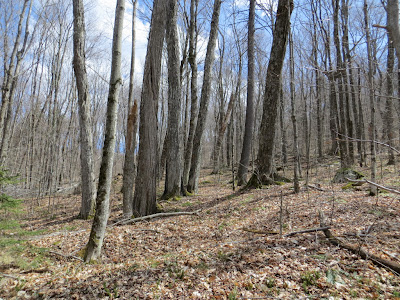 Looking back at Black Mountain through the trees. 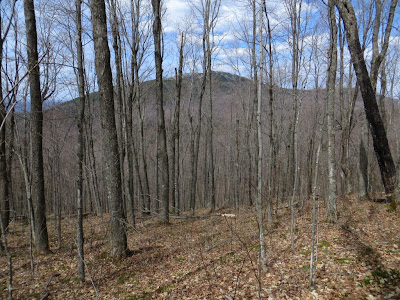 High up on the mountain there was a narrow belt of white birch forest. 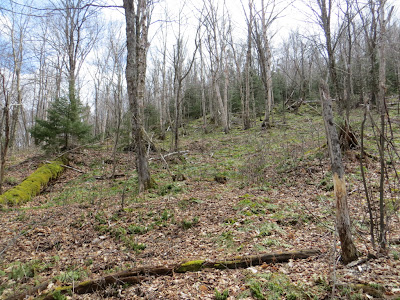 Even the conifer forest around the summit area was fairly open. 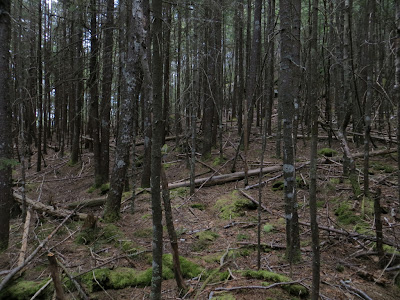 After circling around some wooded cliffs, I intersected the upper end of the unofficial trail and followed it a short distance out to ledges with a good view of the southern half of the Benton Range: The Hogsback, Jeffers Mountain and Blueberry Mountain. 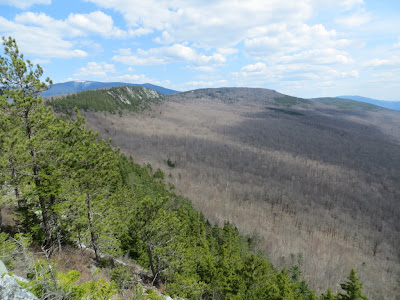 A unique view of Mt.  Moosilauke rising behind The Hogsback. 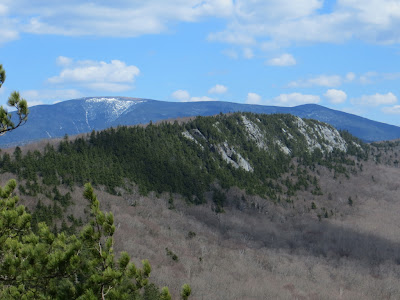 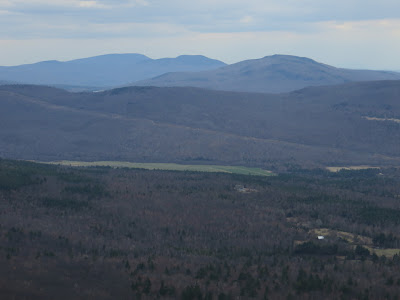 Easterly view towards the Kinsman and Franconia Ranges. 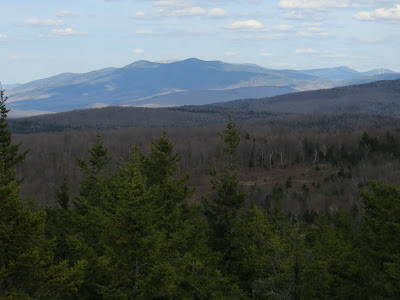 Especially neat was the crest of Lafayette peering over the col between the Kinsmans. 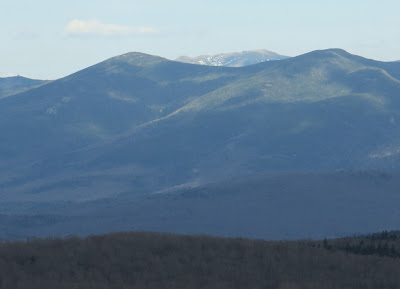 From another outlook ledge - there are several at various locations around the summit - there was a southwestern view across the Connecticut River valley into Vermont. 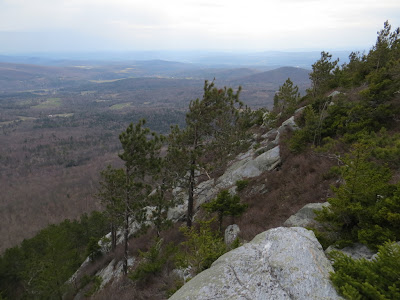 A ledge on the north side looks across at Black Mountain. 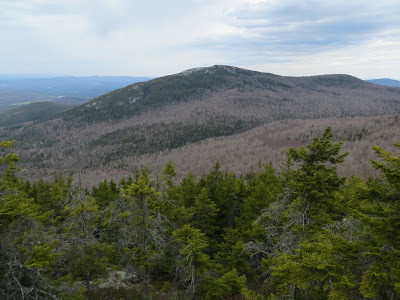 A look down at the beaver ponds by the bottom of Chippewa Trail. 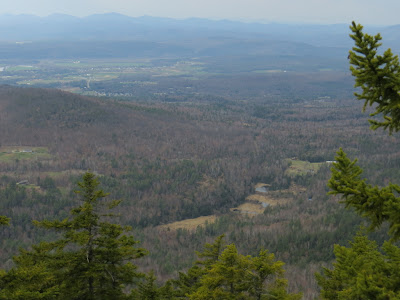 The unofficial trail passes through this quirky tree. 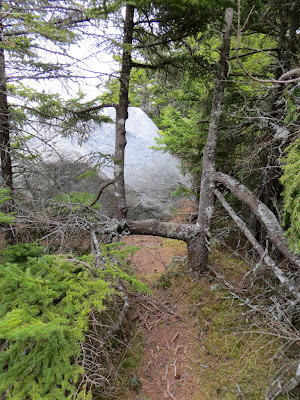 Many peaks are seen in the eastern view. 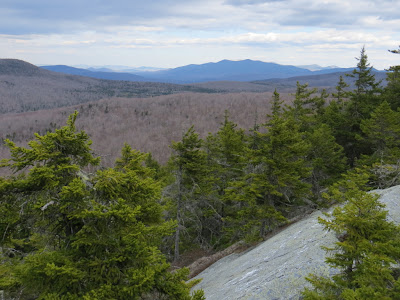 One of several great Sugarloaf perches. 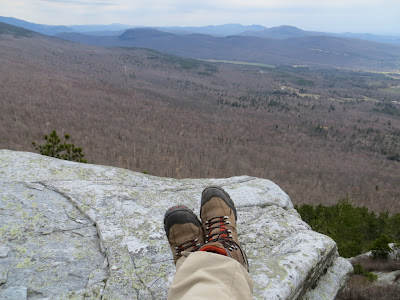 On the way back down, I passed by a giant of the forest. 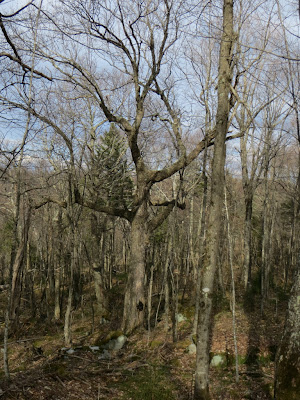 Farther down was a toppled giant. 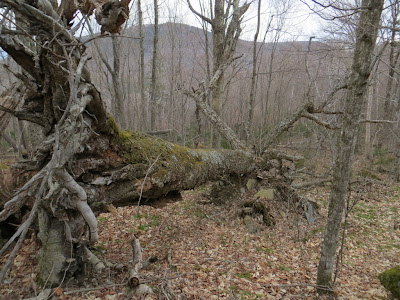 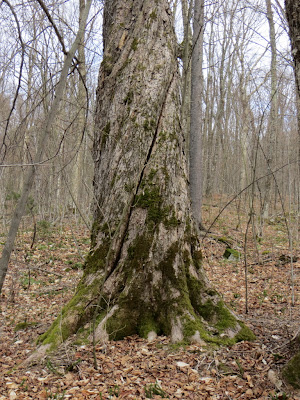 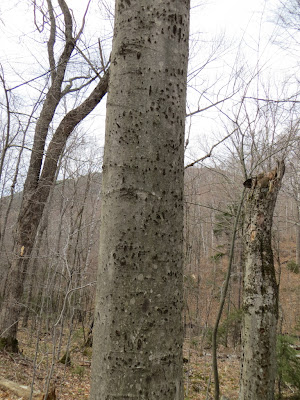 The old cellar hole along the Chippewa Trail. There's always something to see in the low but very interesting Benton Range. 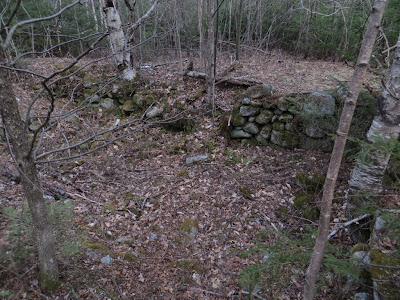