Carol and I spent a leisurely Easter Sunday enjoying a three-mile loop over Mount Prospect in Weeks State Park near Lancaster, with warm spring sun and great views. On the way home we took two additional short hikes near Crawford Notch. We parked by the tiny Mount Prospect Ski Area on Route 3 and followed the Around-the-Mountain Trail (part of the New Hampshire Heritage Trail) to the Mount Prospect Auto Road, which provides an enjoyable climb on foot during the off-season. This birch-lined corridor is along the lower section of the road. 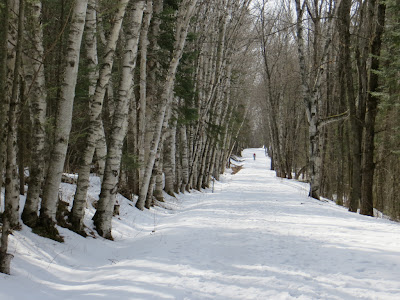 Farther up, on a south-facing slope, spring was in the air! The bare hardwood forest was a beautiful sight. 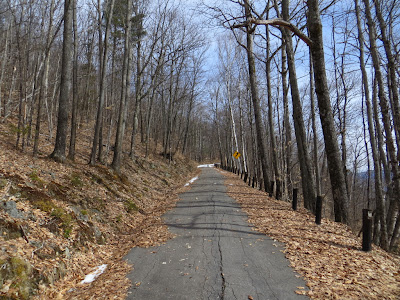 A mile up the road there's an overlook with a great view of the Presidentials, and also of Mt. Cabot and Terrace Mountain in the Kilkenny region, shown here. 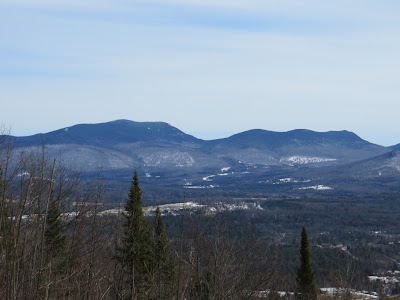 At the summit is the mansion built in 1912 by John Wingate Weeks, a Lancaster native who was a U.S. Congressman and Senator from Massachusetts and also served as Secretary of War. He sponsored the 1911 Weeks Act, which authorized the creation of National Forests in the East, including the White Mountain National Forest. The mansion is an historic site open to the public in summer and fall, and the Weeks State Park Association sponsors a popular lecture series here on Thursday evenings in summer. 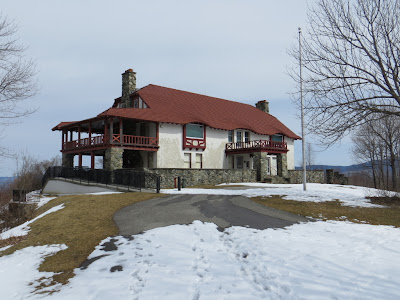 Weeks had a stone observation tower built at the summit. It's closed during the off-season, but is open when the fire warden is on duty in summer and fall. 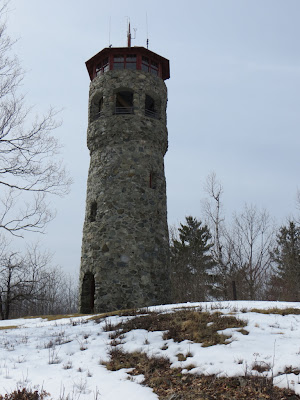 Carol enjoys the Presidential Range view from a bench near the tower. 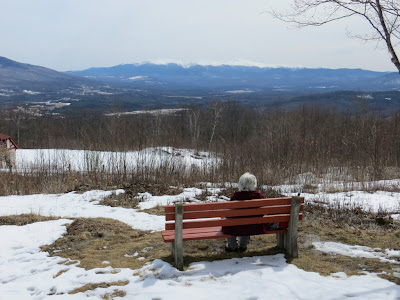 Even without the tower, I was able to spot the summits of 24 New Hampshire 4000-footers from the grounds. Shown here is Mt. Garfield, with the summit of Owl's Head in the Pemigewasset Wilderness peering over the col to the left of Garfield. 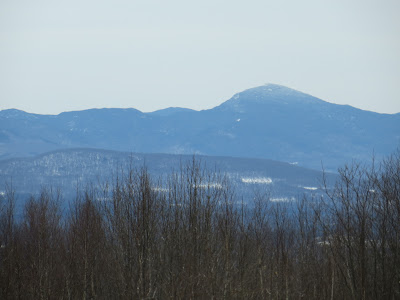 Behind the mansion, a trail leads 125 yards down to a northern overlook. 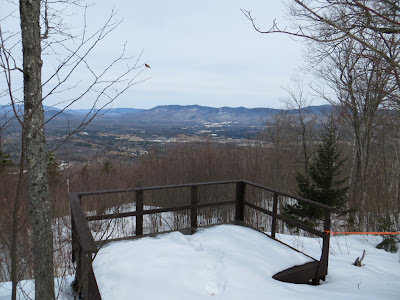 Here there's a good view of the Pilot Range, with Hutchins Mountain seen to the left of center. 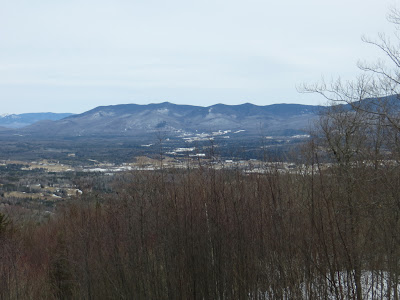 The mountains in the Nash Stream Forest rise beyond the town of Lancaster. 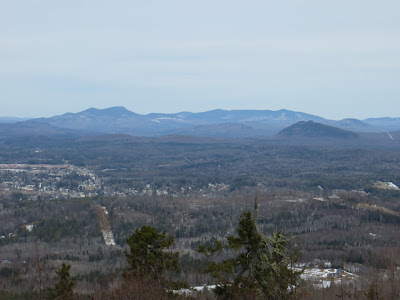 The Percy Peaks and Long Mountain, seen beyond the north end of the Pilots. 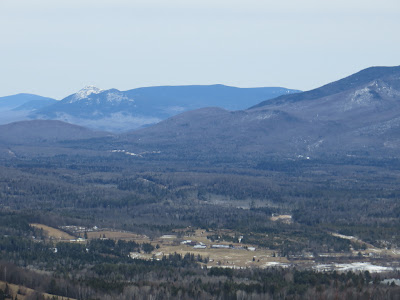 The Presidentials were gleaming with a fresh coating of snow. 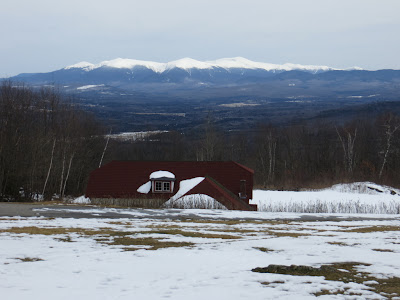 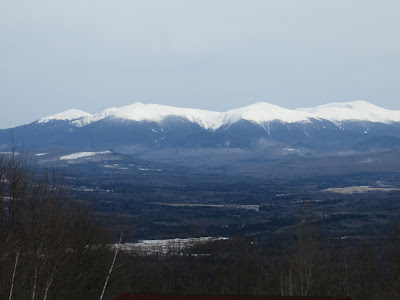 We made a loop by descending the Old Carriage Path to the Around-the-Mountain/Heritage Trail, then following the latter back to our car. Other than some recent logging on the lower Carriage Path, this was a pleasant return route. 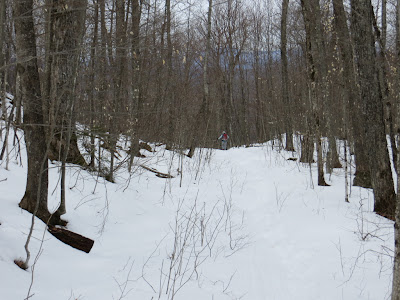 The day was so warm and pleasant that on the way home we made a side trip out to the top of Crawford Notch for the short (0.6 mi. round trip) hike up to the aptly-named Elephant Head via the Webster-Jackson Trail and Elephant Head Spur. 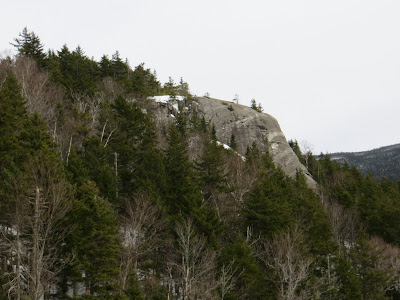 This was one of my favorite after-work walks when I worked at Bretton Woods in the 1980s. 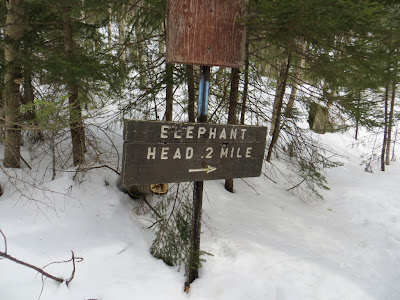 Carol enjoys the view towards Mt. Tom and the Rosebrook Range. 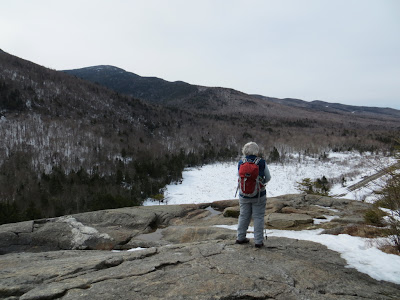 The ledge has a neat view into Crawford Notch, with Mts. Bemis and Nancy seen in the distance. 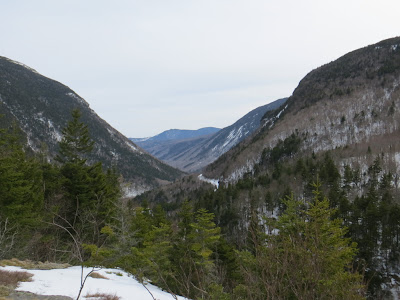 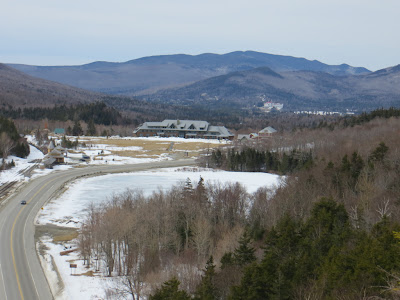 On the way down I made a mini snowshoe bushwhack south through open hardwoods to a smaller, lower ledge, which revealed a bit more of the steep slope of Mt. Willey. 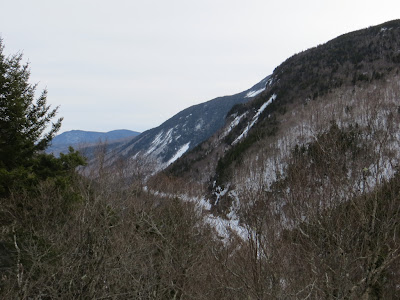 This unusual yellow birch is in the woods behind Elephant Head. 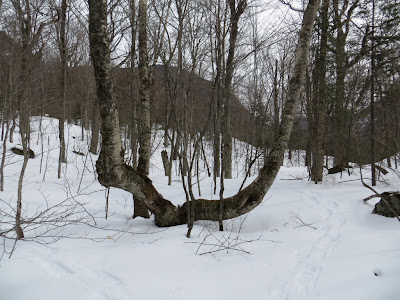 On the way back to Twin Mountain we took one more short walk, following the old roadbed of Route 302 from the Zealand winter parking area to the Lower Falls of the Ammonoosuc River. It's a gentle one-mile round trip walk to the falls. The pool at the base is a popular swimming hole in summer. 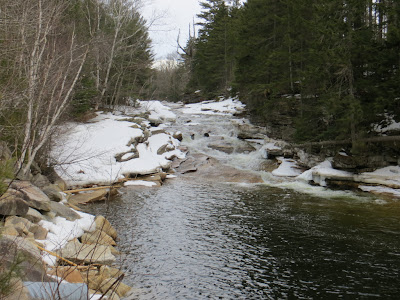 The heavily jointed granite creates a picturesque setting.  It's a much more peaceful spot with the highway off to the south side of the river. The Lower Ammonoosuc Falls are well worth the short, easy walk if you're passing through the Bretton Woods area. 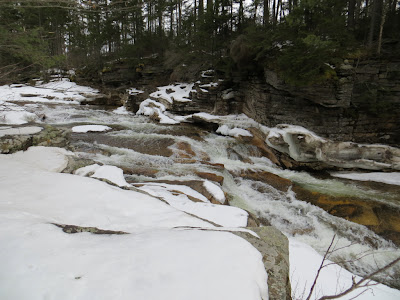