The lower southern slopes of Mt. Chocorua are a great place to visit in early spring. The south-facing hardwoods in this area melt out early, and there are a number of interesting off-trail view spots. The ledges of Bald Mountain, a 2140-ft. spur peak along the Hammond Trail, are one of my favorite destinations this time of year. I knew there would be ice on the lower hemlock-wooded part of the Hammond Trail, and ice and snow higher up near the summit, but the main part of the climb would be through a snow-free hardwood forest, a real plus in April when most trails feature choppy, mushy old snowshoe and boot-packed tracks.

The gravel Scott Rd. into the trailhead was a bit soft in a few spots, but easily passable. An old drift blocked access to the trailhead parking lot (located on private land), but there was room for several cars at the entrance. Hikers parking here should take great care not to block the road, which leads to a private home beyond the trailhead. 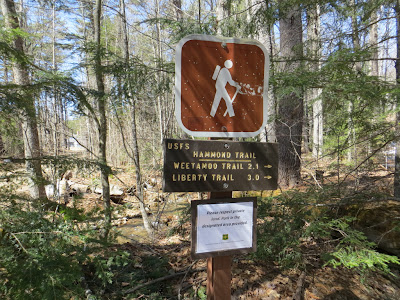 There was quite a bit of ice on the first half-mile of trail; this ended after the second crossing of attractive little Stony Brook. This view looks upstream from the second crossing. In his regional classic At the North of Bearcamp Water, late 19th century author and Chocorua enthusiast Frank Bolles wrote about this brook in a chapter entitled "The Heart of the Mountain." 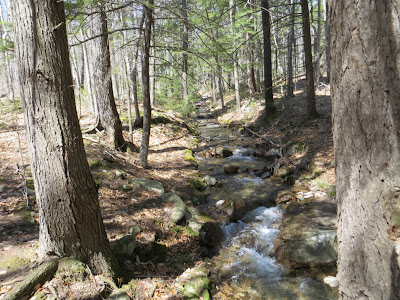 As the Hammond Trail began to climb in earnest, I emerged in bright, bare hardwood forest. 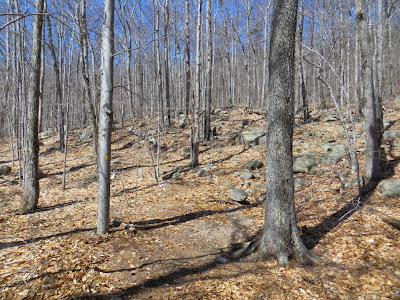 The pleasantly dry climbing continued until near the crest of the ridge, when the woods became shadier and the trail presented a typical April mix of old snow, ice and bare ground. 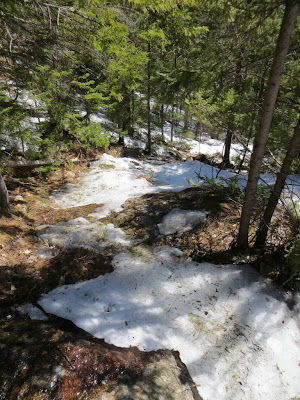 Near the top of Bald Mountain, I dropped left a few yards to a partly snow-covered ledge with a partial view of the Ossipee Range. The sun was shirtsleeve-warm here. 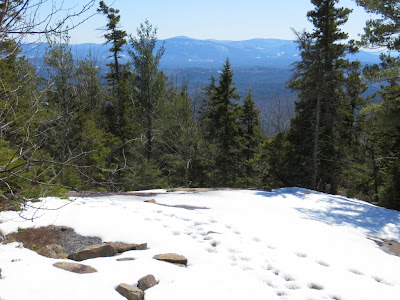 After a break I headed off-trail on snowshoes to visit the various view ledges to the east of the trail. When wandering through this area, I tread carefully to avoid stepping on the puffy lichens found in places on the ledges. After a while I found a perch with a nice view looking south to Chocorua Lake.
Another balmy spot in the April sun! 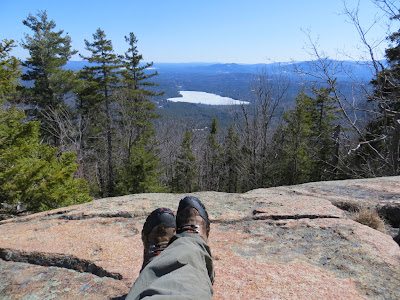 Ossipee Lake could be seen in the distance. 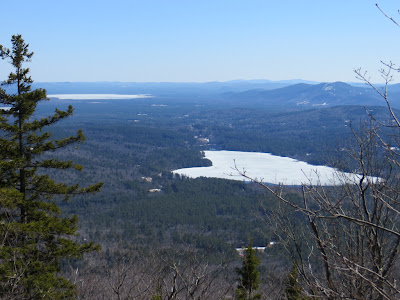 I proceeded across the bare granite ledges from which the mountain received its name. 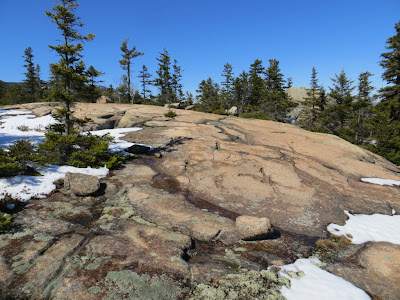 It wasn't far to the ledges that offer the classic Bald Mountain view of Mt. Chocorua, the Three Sisters and Carter Ledge rising above the Chocorua River valley. 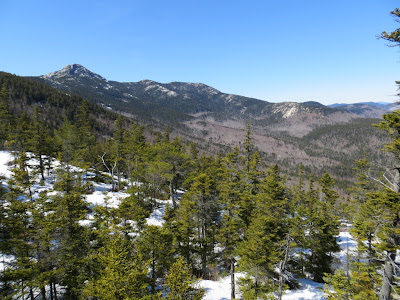 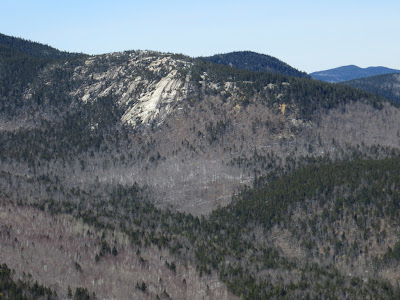 A closer look at Chocorua and the Sisters. 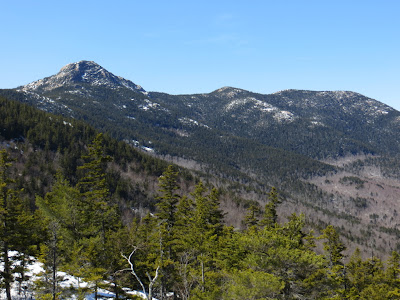 The rocky cone of Chocorua is impressive from many angles. 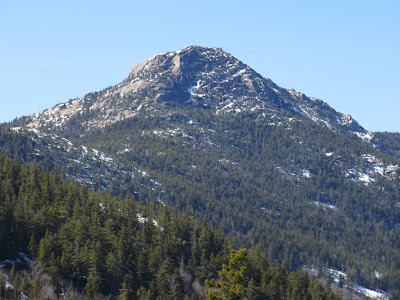 There was a jumble o' rocks between the two principal view ledges. 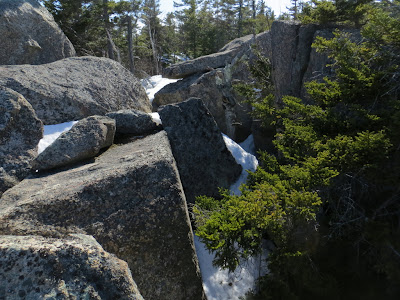 The widest vista is found atop this outcrop. 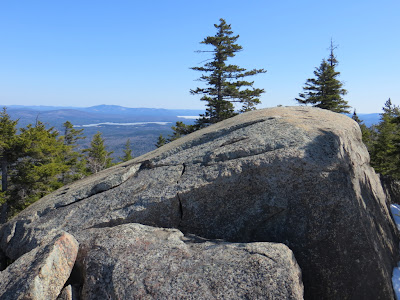 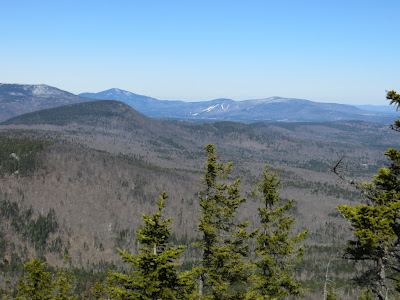 A nice angle on the Moat Range. 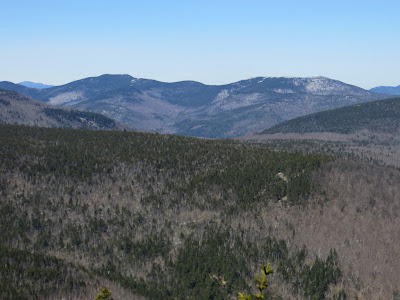 Looking south to the Ossipee Range. 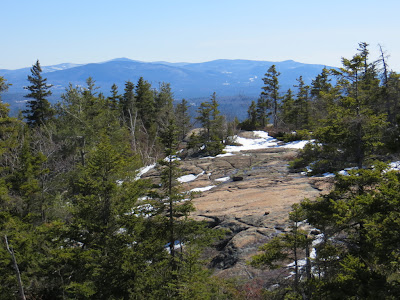 After a long sojourn, I snowshoed down to some lower ledges that opened an even wider view over the valley. 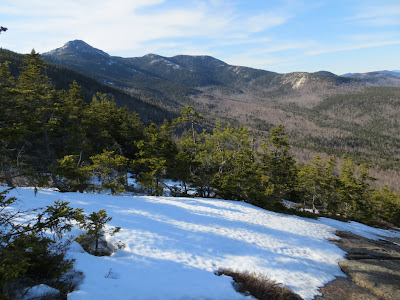 An eastern view beyond an interesting bent-over red pine. 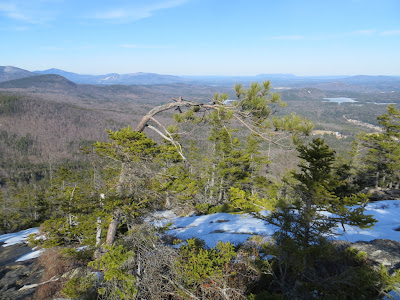 An old cairn on the snow-covered ledges. As far as I know, there has never been a maintained trail to the Bald Mountain ledges. 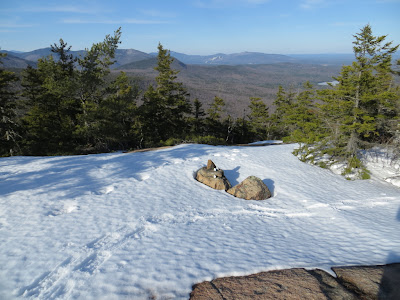 More ledges on the north side of the summit plateau. This bump appeared to be the summit of Bald Mountain. 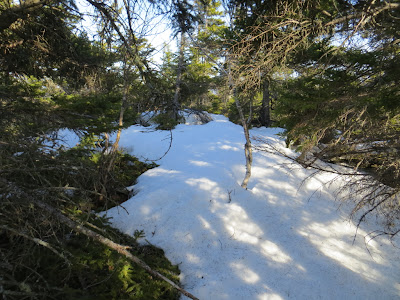 After descending partway down the Hammond Trail, I struck off to the east and bushwhacked down through open oak forest. 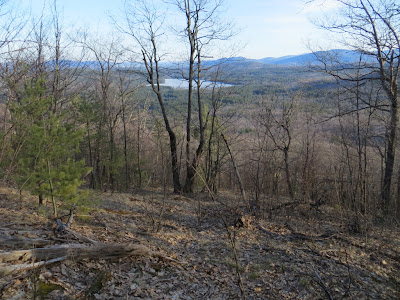 Farther down I paused at a natural meadow-like area in the woods with a view of Chocorua Lake and the Ossipee Range. 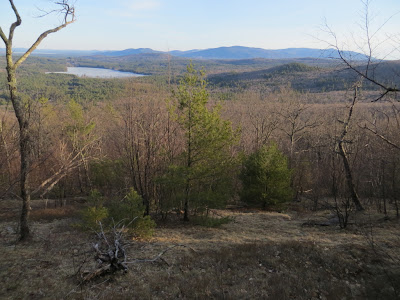 There's a classic beech forest along the Hammond Trail, with some excellent bear trees. 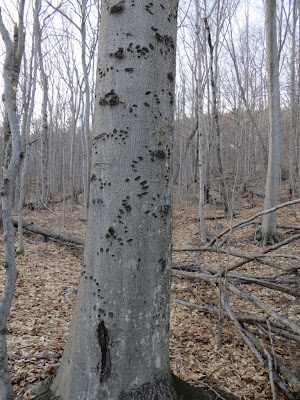 Before heading home, I followed a Nature Conservancy trail a short distance out to the field of the old Hammond farm, for a look back up at Bald Mountain. 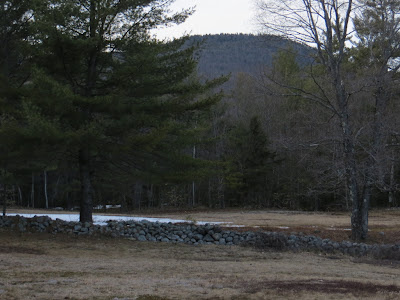