I wasn't free for a hike until mid-afternoon and wanted to take advantage of the great firm snowshoe bushwhacking conditions before the next day's snowstorm. On the way back from an appointment in Littleton, I headed out to an area I had explored several times in the past: the ridge on the north side of Lafayette Brook on the NW side of Mt. Lafayette. There are acres and acres of open woods on this slope, and a couple of interesting view ledges along the crest of the ridge. I figured with the firm snow and open woods I'd have time enough to make the 1.5 mile, 1300-ft. climb to the upper view ledge.

I parked at the Gallen Overlook at the end of a spur road off Exit 34C on the Franconia Notch Parkway and followed the bike path/snowmobile trail across the bridge high over Lafayette Brook. From the bridge there's a great view up the valley to the majestic crest of Mt. Lafayette. 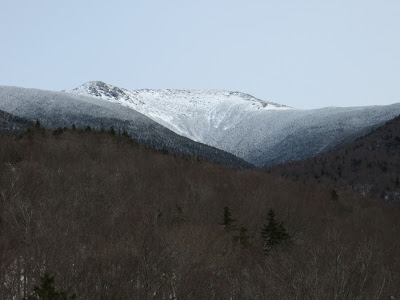 Also from the bridge, you can see the NW ridge of Lafayette. The upper view ledge I was aiming for, dubbed "Sleeping Chief Ledge" by Chris "NeoAkela" Whiton, can be seen as a snow-speckled patch of rock just right of center. The lower view ledge is tucked into the spruces on the knob to the left. 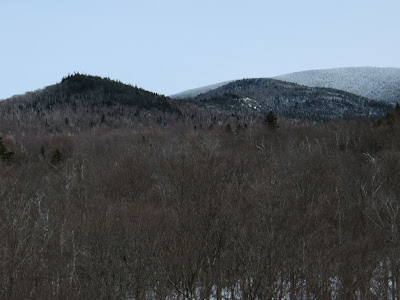 The woods on this route are open right from the get-go. 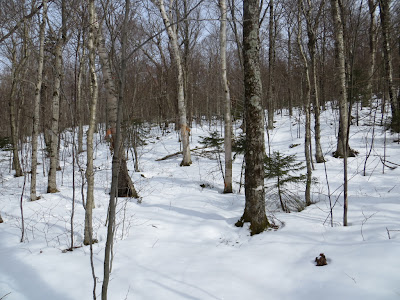 Good tracking snow, with a bit of powder atop the solid base. Red fox? 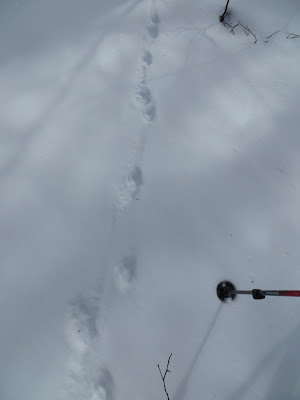 White birches become more and more prominent as you ascend higher on the slope. More than 3000 acres were burned in this area by a 1903 forest fire, and afterwards the birches took over. 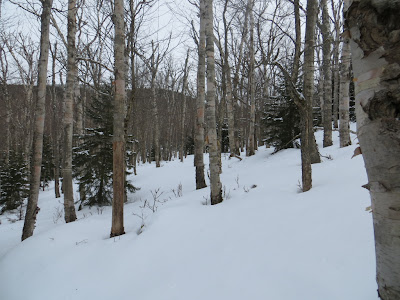 Birch glade nirvana at 2900 ft. It doesn't get any better than this! 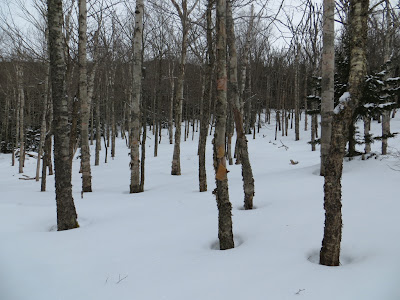 Higher up, as I bushwhacked through open softwoods, I passed this interesting overhanging boulder. I don't recall the low stone wall being there when I first came through here back in 2001. 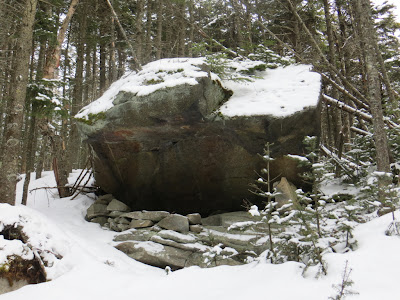 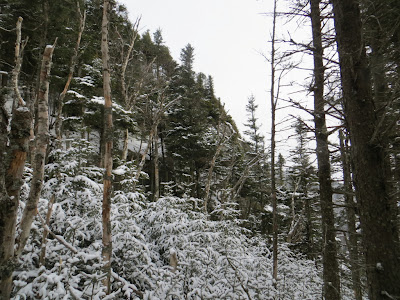 I circled around the back side of the knob and climbed fairly steeply through open conifers. Only the last 100 ft. out to the ledge was thick. 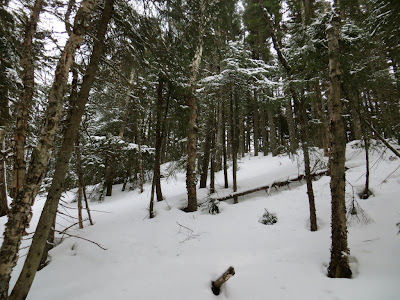 Pushing through the scrub out to the ledge, elevation 3150 ft.. 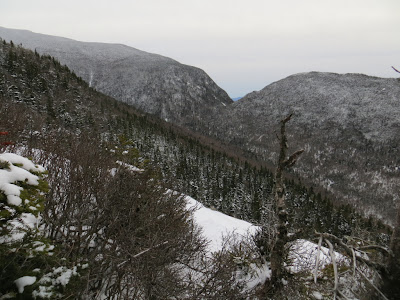 Out on the ledge, I was treated to a great view down the Lafayette Brook valley and out to the Green Mountains on the horizon. This is a real perch, with a good dropoff in front. With an inch of snow covering the sloping ledge, I didn't go too close to the edge. 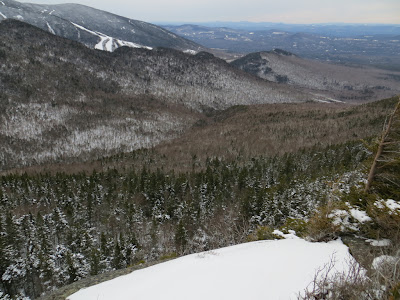 An unusual view of Eagle Pass, through which the Greenleaf Trail passes. 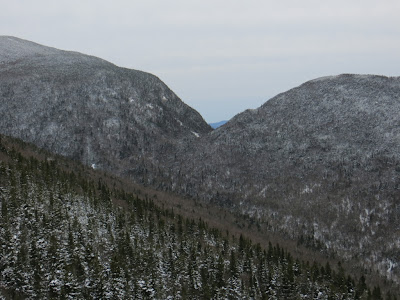 A zoom on Artist's Bluff (L) and Bald Mountain (R). 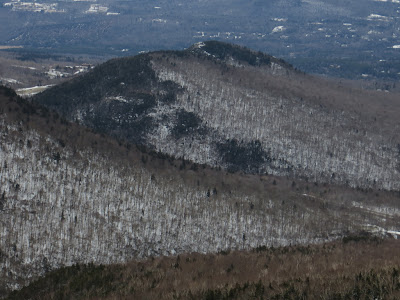 From this ledge you see only part of Mt. Lafayette's summit crest, and the very tip of the North Peak on the L. 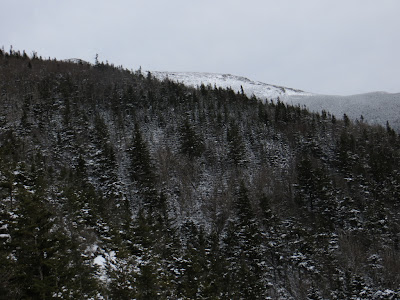 Cannon Mountain rises beyond the wooded backside of Eagle Cliff, with its many knobs. 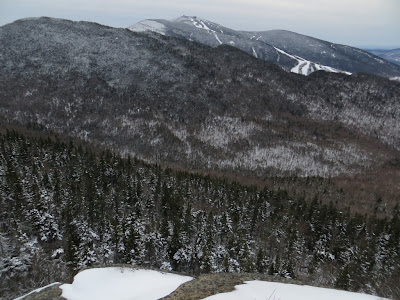 A framed vista towards I-93, Franconia village, and the Jay Peaks on the horizon. 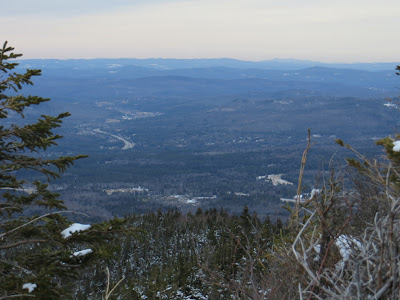 Following my tracks down behind Sleeping Chief Ledge. 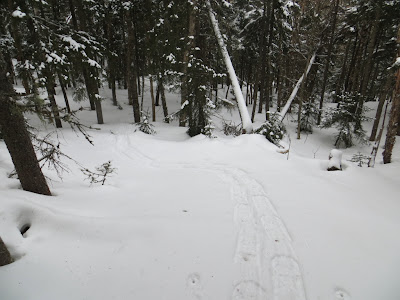 Descending through the glorious birches. 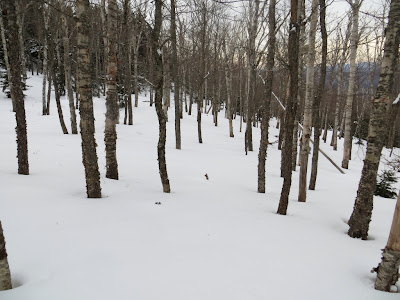 Bushwhacking at its best! 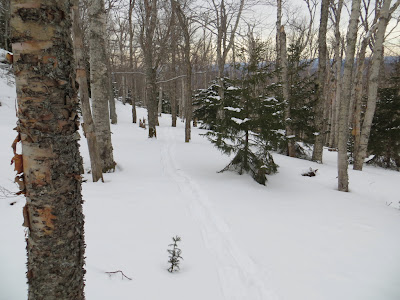 I wanted to see the view  from the lower ledge at 2800 ft. It was after 6:00, but I figured I'd try to find it. I headed up to the crest of the ridge at this beautiful little col. 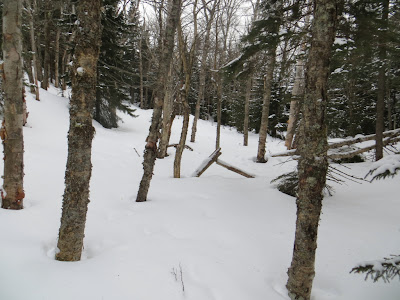 After some searching around in rough, ledgy terrain with dense spruces, I found the ledge. It has two adjacent flat perches with a nice view up the valley to Mt. Lafayette and Eagle Pass. 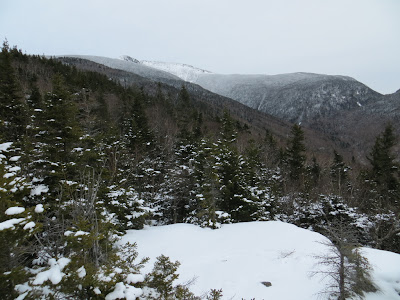 The upper of the two ledge perches. 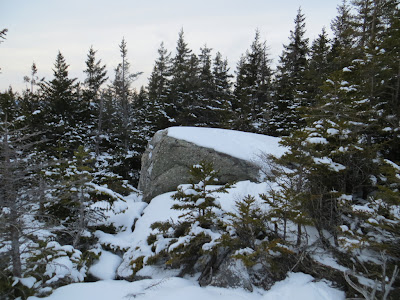 A closer look at Lafayette. After a brief stay here, it was time to head back to the open woods for a  swooping and shuffling descent back to the bike path, making it out before dark. What a fun snowshoe journey! 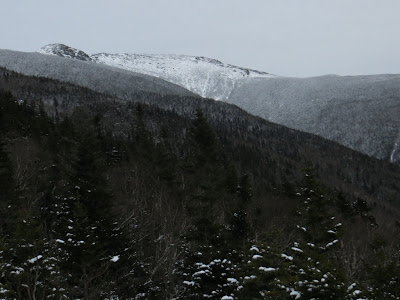