With a half-day off under partly sunny skies, I decided on an exploration close to home: Loon Mountain. I had wandered around this interesting mountain, best known for its major ski area, several times before, but it had been a number of years since I paid a visit. I rode the gondola up to a sub-summit, with plans to seek out an old hiking trail to the North Peak, then descend via ski trails with off-trail side trips to Loon Pond and Little Loon Pond.

From the top of the gondola, I walked down a path to the outdoor amphitheater with its spectacular view, where Carol and I were married in 2000. Where else can you tie the knot with the Bonds as a backdrop? 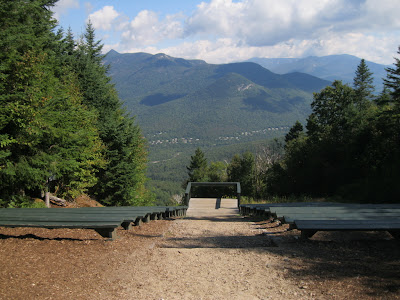 I took a quick walk down and up through Loon's glacial caves, sort of like a little mountaintop King Ravine Subway, if you go off the main route. 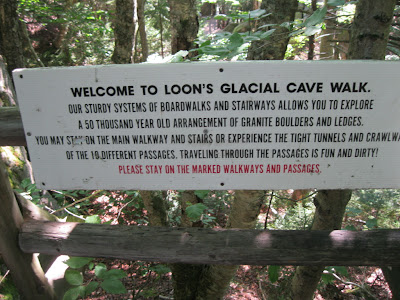 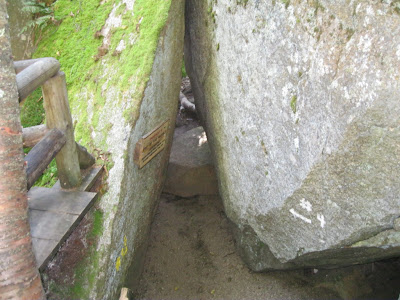 I dropped off the back side of the gondola summit on a ski trail, then climbed up another ski trail a ways and bushwhacked across to pick up the abandoned hiking trail that climbs steeply to the ledgy true summit (3065 ft.) of Loon Mountain. Most of the trail was pretty clear and easy to follow, and there were still some old orange blazes. 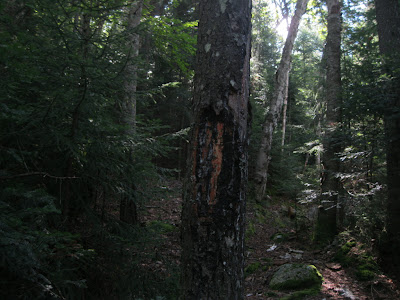 The old trail is pretty steep in places, including this ledgy slot. 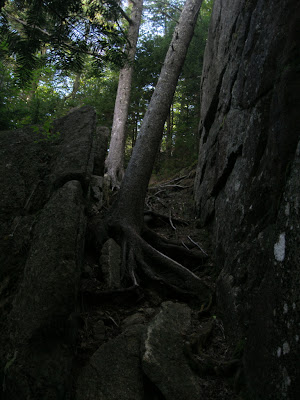 The upper 0.1 mile was in rough shape, overgrown with lots of blowdown. 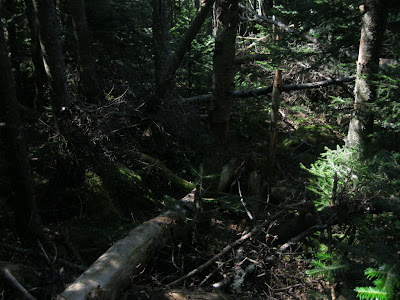 I hadn't been up here in a few years, and the view from the summit ledges has grown up considerably, though it's still pretty decent. This vista looks over nearby Black Mountain and across the Pemigewasset Wilderness to the Willey Range and Mts. Hitchcock and Hancock; the distant Presidentials were socked in. 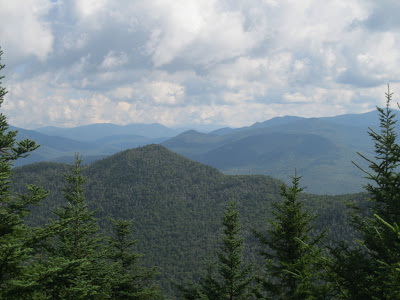 By standing, I could see over the trees to the Twin-Bond Range. I could spot two new slides from Tropical Storm Irene - a good-sized one on the side of Mt. Bond, and a small one in the Redrock Brook basin. 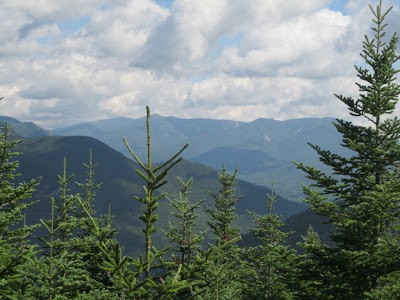 Scar Ridge looms ominously to the east, beyond the North Peak ski trails. 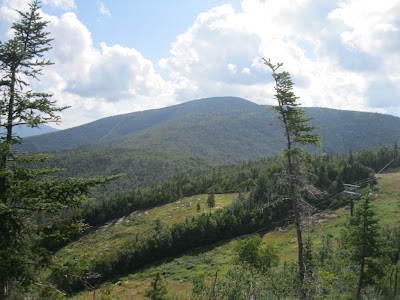 I followed the old hiking trail back down to its beginning on a ski trail, then descended along another ski trail towards Loon Pond. I made a short bushwhack to the top of an open cliff that drops into the water of this beautiful glacial pond, which was at one time far better known than it is today. The original name for Loon Mountain was Loon Pond Mountain, and a hundred years ago the pond was famous as a natural beauty spot. A crude trail led to the pond, and visitors then sometimes bushwhacked to the South Peak or North Peak of Loon for views. In 1881 intrepid AMC explorer Lucia Pychowska wrote an interesting article for Appalachia about an exploration of Loon Pond Mountain and its two ponds. In this photo, taken from the clifftop, Loon's South Peak rises beyond the pond. 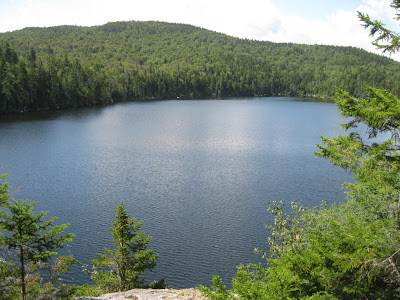 Looking down at a corner of the pond. In recent years Loon Pond has been better known as a source of snowmaking water for the ski area (it's no longer used for this purpose) and as one source of drinking water for the town of Lincoln (no camping, and visitors should take care to protect the purity of the pond). 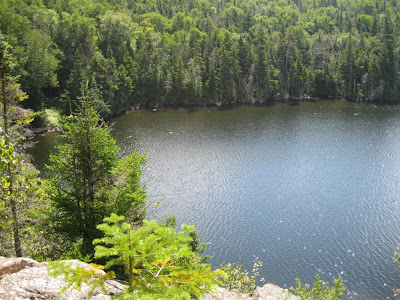 The cliffs drop right down into the water. 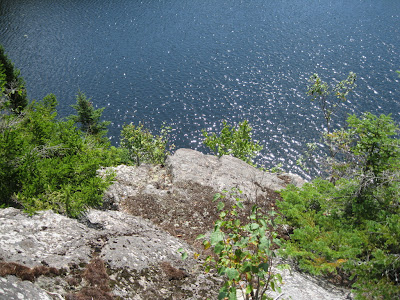 Someone had set up a convenient bench for viewing the pond. What a peaceful and relaxing spot,  close to the ski area but feeling far removed. 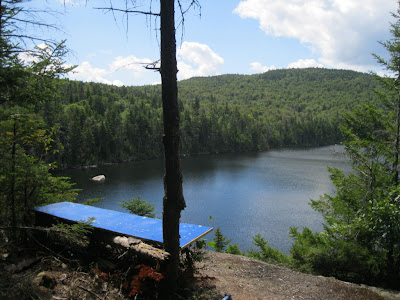 I returned to the ski trail and descended some more, then made another short bushwhack to the cliffs that overlook Little Loon Pond, which Lucia Pychwoska referred to as "a rock-set gem." 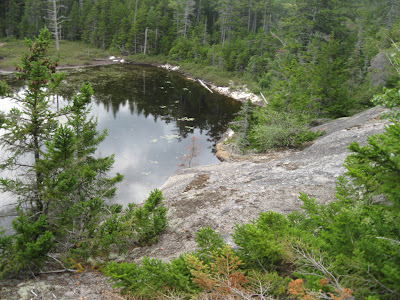 Looking across at the South Peak of Loon. 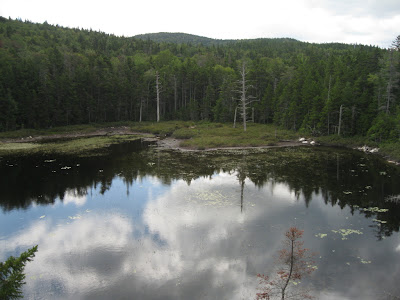 Relaxin' on the ledges. 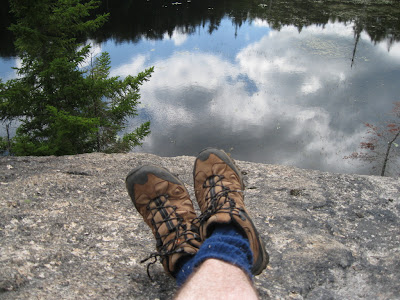 Little Loon, small and secluded. Until the 1960s both Little Loon Pond and Loon Pond could be accessed by the WMNF Loon Pond Trail, which ascended along the west side of both ponds. 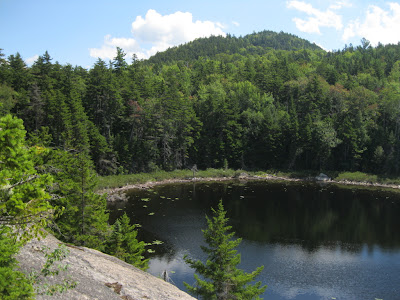 A ledgy spot near the Little Loon Pond cliffs opens a view NW to the Kinsman-Cannon ridgeline. 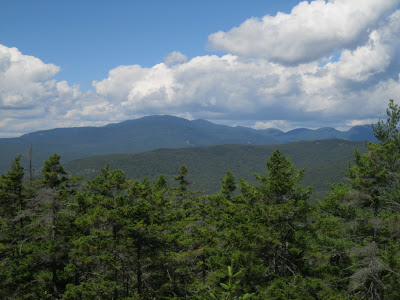 A peek from the ledge at Big Coolidge, Liberty and Flume. 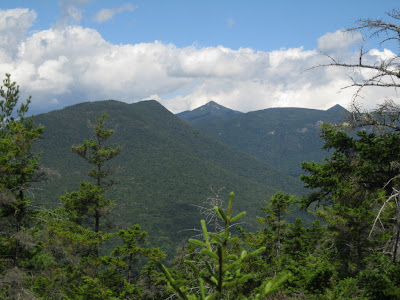 I found an old herd path leading back to the ski trail. 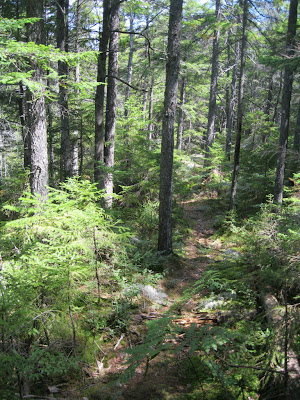 Walking down the ski trails through carpets of late summer wildflowers, with a great view ahead of the peaks surrounding the slide-scarred Clear Brook basin. 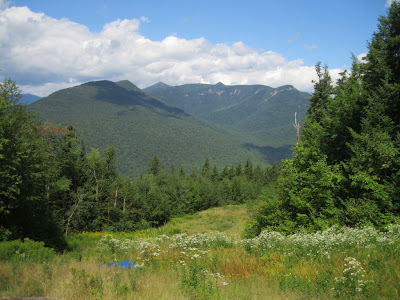 A zoom on Clear Brook, with Mt. Flume in back and Whaleback Mtn. on the R. 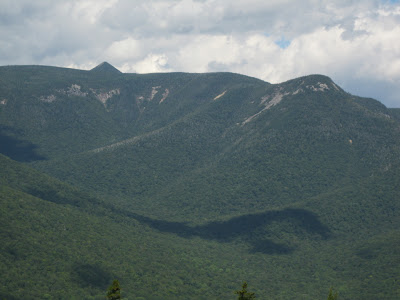 Mt. Bond in the distance, with the new Irene slide visible. East Whaleback (once called Elephant Mtn.) and Potash Knob in front on the L. 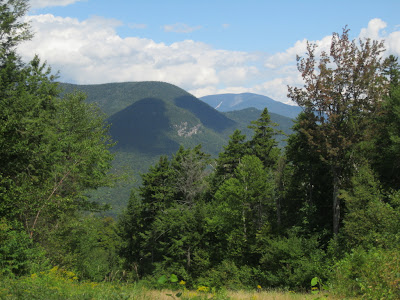 Around a bend, a view of Moosilauke. I took a variety of ski trails back to the base of the mountain, concluding an interesting half-day on Loon. 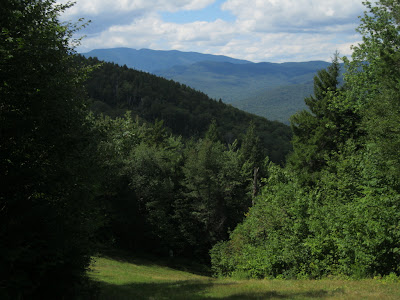