On a cool, cloudy day my brother Drew and I spent an afternoon walking through the Zealand Valley and out into Zealand Notch. This is one of the most rewarding lowland walks in the Whites, with wetlands galore and excellent views of the surrounding mountains. (The Zealand Valley was originally called the New Zealand Valley in the late 1800s, supposedly a humorous reference to its remoteness.) We set off on the Zealand Trail, which largely follows the grade of the late 1800s Zealand Valley logging railroad, at the crack o' noon. 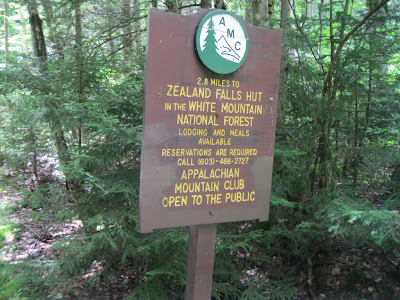 The first open wetlands are reached at 1.7 mi., with views up to Zealand Ridge, with "Zeacliff Pond Peak" on the R. 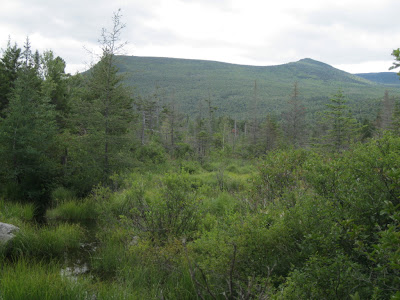 There is a very active beaver colony in the Zealand Valley. 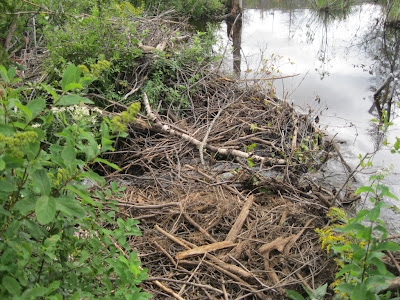 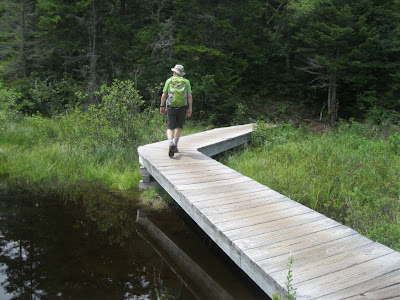 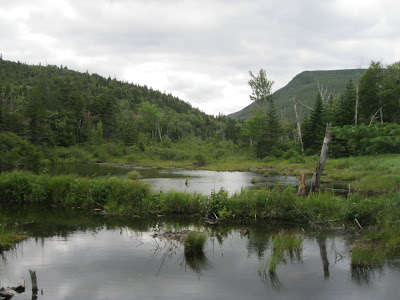 One of the largest beaver ponds is near the A-Z Trail junction. It's said that this flat was a staging area or log yard during J.E. Henry's Zealand logging operation. Mt. Tom is seen in the distance. 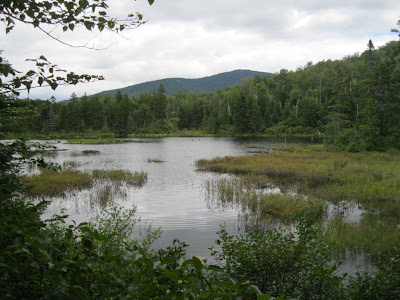 Zealand Pond, with spurs of Mt. Hale in the distance. This pond is unique for having outlets into both the Connecticut River watershed (via Zealand River and Ammonoosuc River) and the Merrimack River watershed (via Whitewall Brook, North Fork, East Branch and Pemigewasset River). 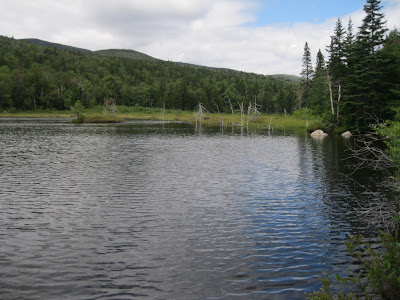 Drew hanging out at Zealand Pond. 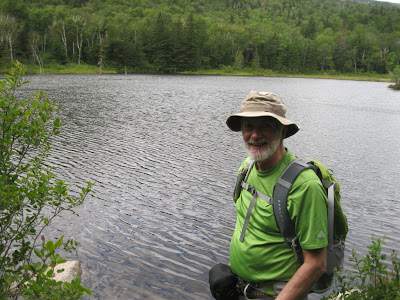 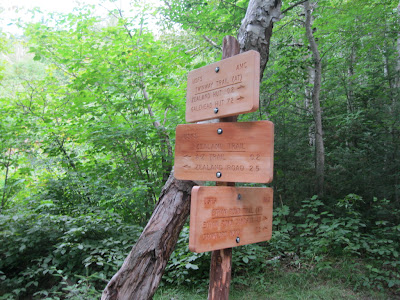 En route to Zealand Notch along the Ethan Pond Trail, we dropped down through the woods to Whitewall Brook, following faint paths at times, and made our way to a pretty cascade. 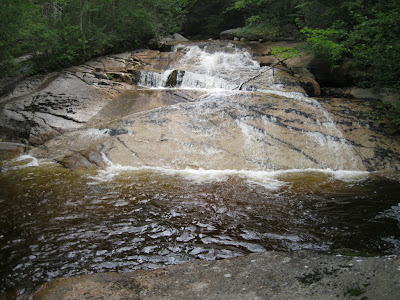 A beautiful stretch of the stream. 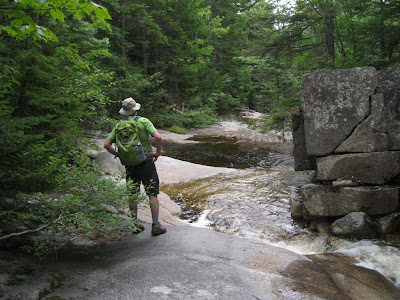 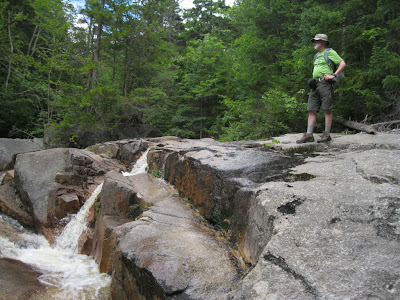 Looking south down the brook from the base of the lower cascade. 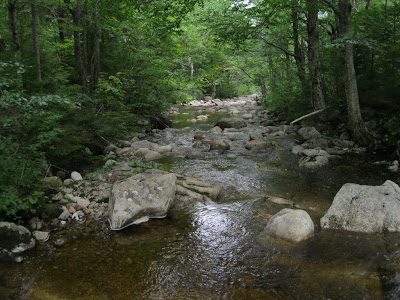 We bushwhacked up the slope to the Ethan Pond Trail and continued south along the old railroad grade to the open talus area in Zealand Notch. The first view looks across the Pemigewasset Wilderness to the North and NW Peaks of Mt. Hancock. 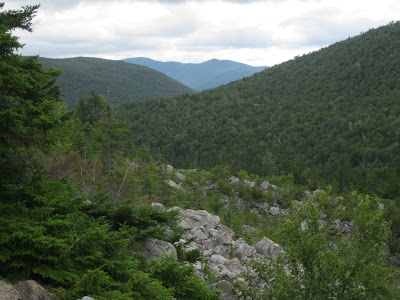 Hard to believe a railroad was built along the side of Whitewall Mountain, with its ragged cliffs and massive talus slopes. The top of Whitewall - in particular the far-viewing ledges at its south end - is an alluring bushwhack objective. Some folks go right up the talus and through a slot in the cliffs, but I don't recommend it; the rocks are big and unstable and could pose a threat both to the bushwhacking party and unsuspecting hikers on the trail below. Far better to ascend Whitewall from the south or north, largely through birch forest. 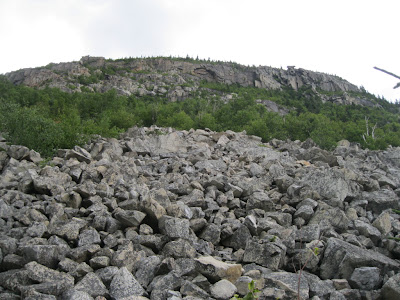 A big flat-topped rock in the trail is a great spot to take a break and soak in the scenery of Zealand Notch. 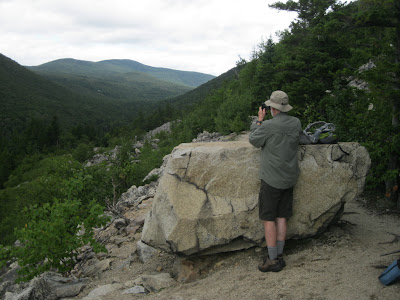 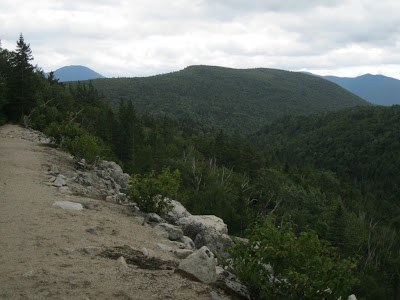 The rounded knob of the Zeacliffs looms high above the notch. 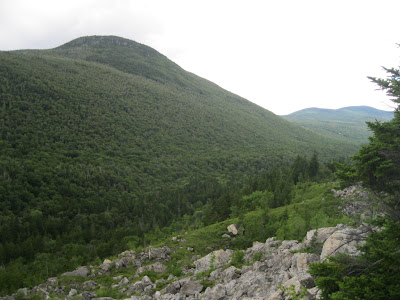 Plenty of talus below the trail, too. 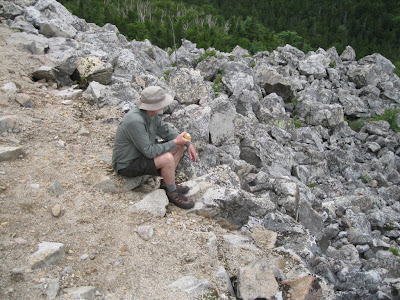 Looking north up the notch to Mt. Hale. The roof of Zealand Falls Hut is visible in the center of the photo. Interestingly, on this midsummer day we saw not one other hiker during a fifty-minute sojourn here in the heart of Zealand Notch. 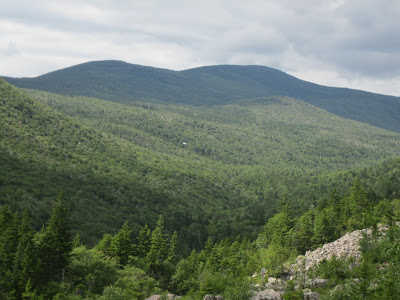 On the way back Drew spotted this interesting lichen pattern on a trailside rock. 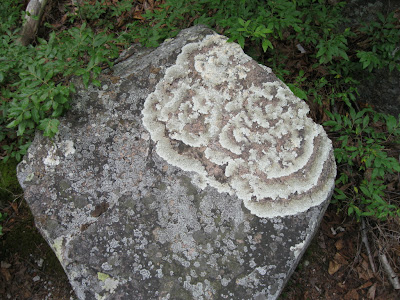 Cruising along the Ethan Pond Trail, heading north out of the notch. 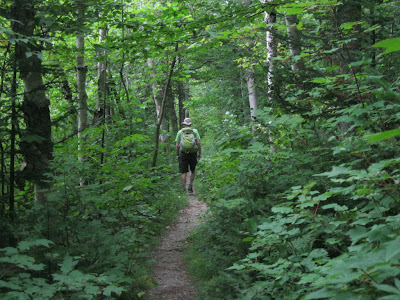 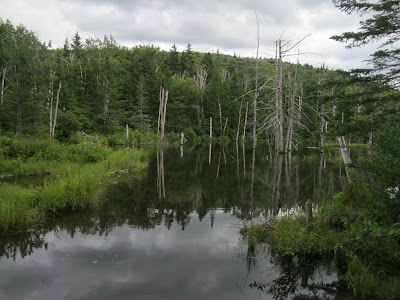 A parting view revealing the full length of Zealand Ridge. 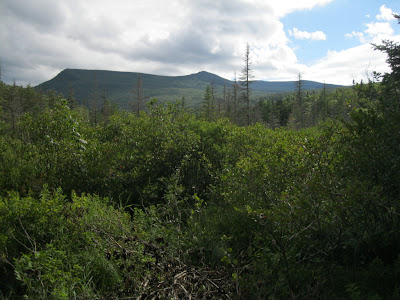 On the way out on the Zealand Trail, we made a short side trip to some ledges in the Zealand River. Zealand is a place to return to again and again. 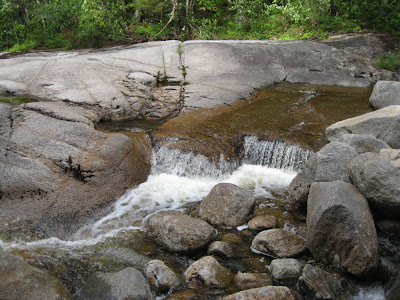