MORNING HIKES OFF THE KANC

Beating the heat during a sultry week with a couple of before-work jaunts along the western Kancamagus Highway.

This cascade on the South Fork of Hancock Branch is accessed by a short but obscure, overgrown and blowdown-strewn path from a pulloff on the Kanc. The falls and path were mentioned in a 1990s WMNF handout on waterfalls in the Pemigewasset Ranger District, which is where I learned about it. I hadn't been here in a few years, time for a re-visit.

It took less than ten minutes to get to the big granite slab at the top of Pitcher Falls - a great place to relax and take in a framed view of East Osceola (L) and the main Osceola summit (R). 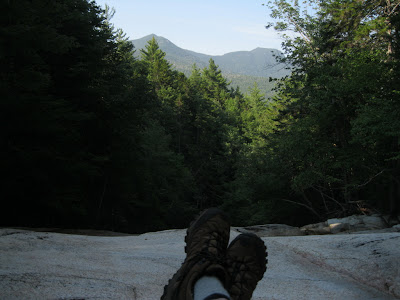 A closer look at the view. 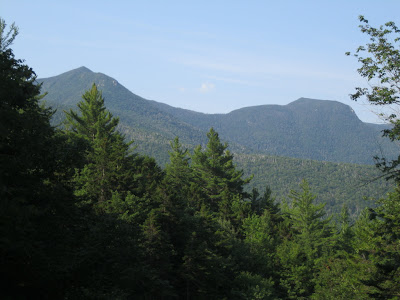 The wooded spire of East Osceola. 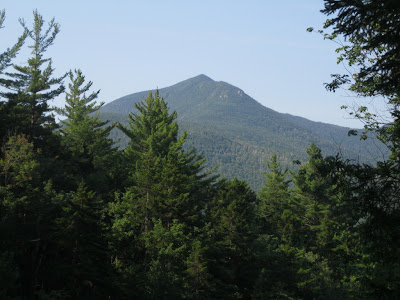 The main Osceola summit, with the Split Cliff jutting out on the R. 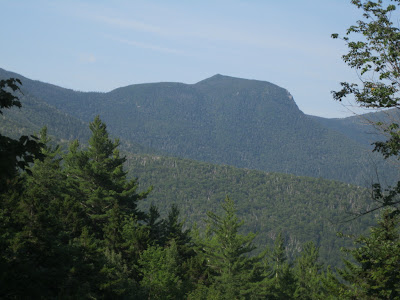 I bushwhacked down a steep slope for a look at the main part of Pitcher Falls. It's more of a waterslide than a waterfall, but quite attractive. 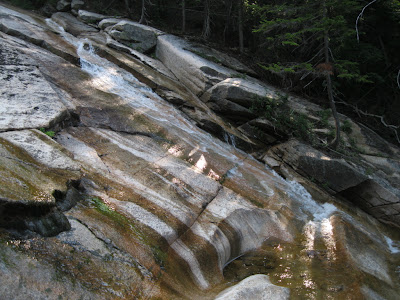 Interesting ledge shelves near the bottom of the falls. 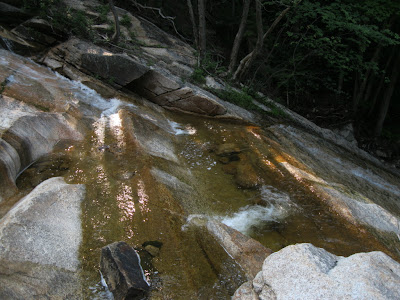 Back at the top, a peek at Middle Osceola. 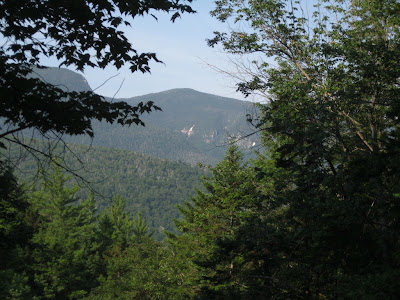 Found some mountain avens (with the rounded leaves and faded yellow flowers) growing on a ledge. 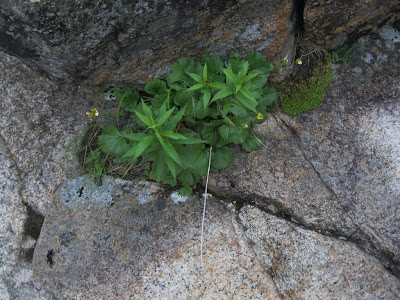 There was an interesting basalt dike (the gray rock) in the brookbed above the falls. Wonder if there are other cascades along the South Fork? 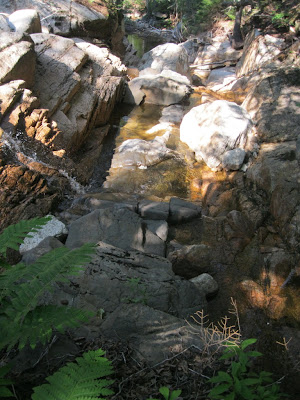 The next morning I took a longer walk to an old favorite, the two Greeley Ponds in Mad River Notch. There was only one car in the Greeley Ponds Trail lot when I set off, and I never saw those folks.

An easy half-hour climb (though the footing is rough at times) brought me to the height-of-land in Mad River Notch, where I admired this magnificent maple. 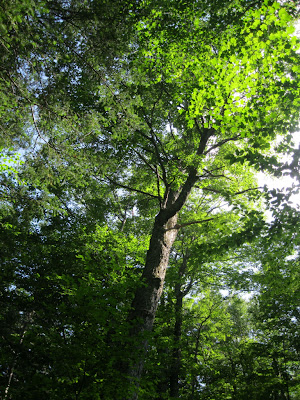 At Upper Greeley Pond, there are two fine viewpoints on the eastern shore, reached by an overgrown path that leaves the main trail by the pond outlet. The view up to the massive spreading eastern face of East Osceola always impresses me. The Mt. Osceola Trail climbs steeply to the R of the rock slab seen under the R end of the main ridgecrest. 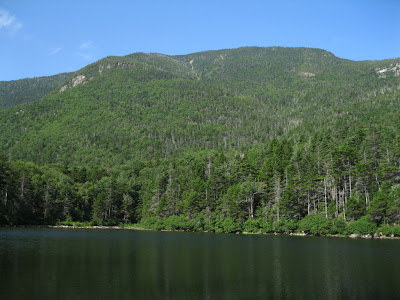 A great view across to the cliffs on the mountain's NE spur. Peregrine Falcons sometimes nest here, though I didn't see any today. 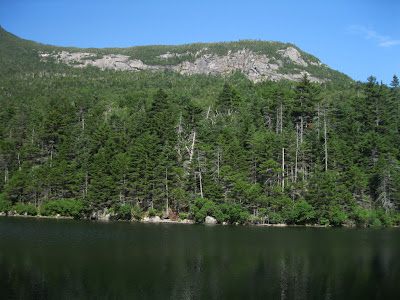 I've often considered whacking to the top of these cliffs from the north for what would be a great view over the ponds and down Mad River Notch. But the woods above the clifftop look seriously gnarly and nasty. I did once whack to a lower ledge way down to the R and got a teaser of what the higher view would be like. 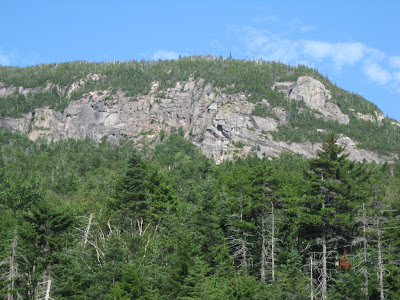 Neat view of the southern spurs of East Osceola. In a quiet half-hour spent on the little beach seen in the foreground, I heard or saw the following birds: White-Throated Sparrow, Swainson's Thrush, Winter Wren, Solitary and Red-Eyed Vireos, Black-Throated Green and Black-Throated Blue Warblers, Common Raven, and Belted Kingfisher. Mid to late July is the last hurrah for summer birdsong. 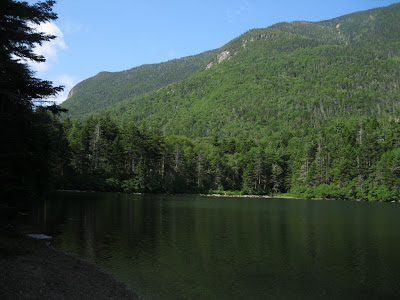 A side view of the Painted Cliff. Through binoculars the rock face looked strangely corrugated. 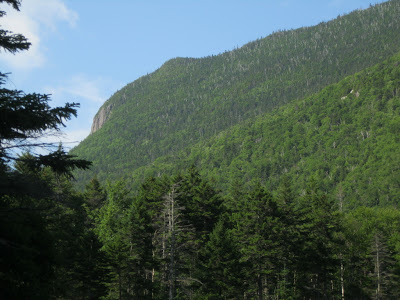 Looking north down the pond to the cliff-faced western spur of Mt. Huntington. 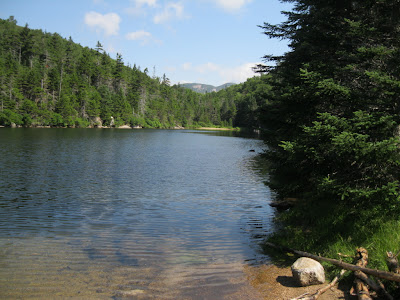 The shady hardwood path between the ponds, deep in Mad River Notch. 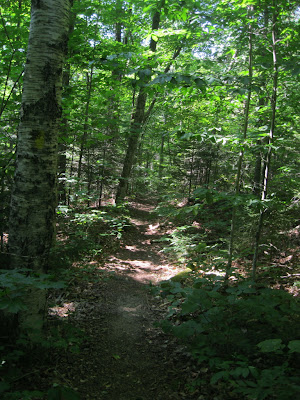 A long slide that curves down off East Osceola ends up right beside the trail. This slide is occasionally traversed by backcountry skiers. 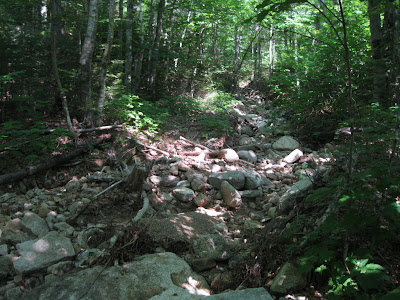 I popped out onto the gravelly shoreline viewpoint at the NW corner of Lower Greeley Pond, looking back at the NE spur cliffs. 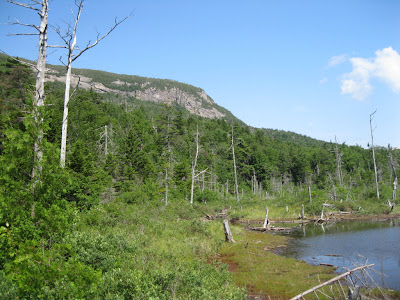 Here you look across at the west knob of Mt. Kancamagus, which features the "K2 Cliff," as named by early 1900s Waterville Valley trampers. 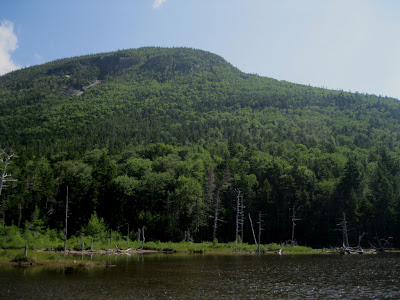 Looking south down the shallow Lower Pond, overlooked by a southern spur (home of the "K1 Cliff") of Mt. Kancamgus. 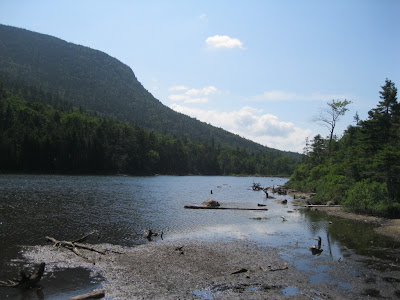 Relaxing on the beach at Lower Pond before heading back. Didn't see a single hiker at either pond, but as I headed out I passed a total of 15 people heading in. 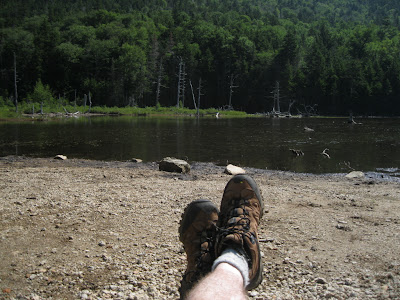