I had a sunny afternoon free for a hike on the way back from a trip to the Manchester Airport. I didn't feel like doing any significant climbing during the heat of the day, so I decided on a loop to an old favorite viewpoint, The Scaur in Waterville Valley, with a couple of side trips added on. 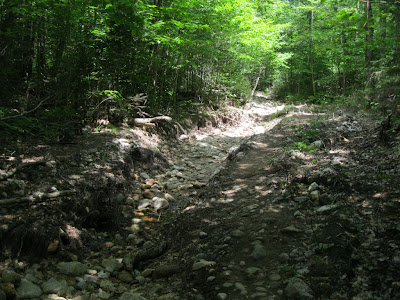 The Forest Service has done some work in here, with more to come. The middle section of Greeley Ponds Trail, from the Timber Camp Trail to the lower pond, is still closed. 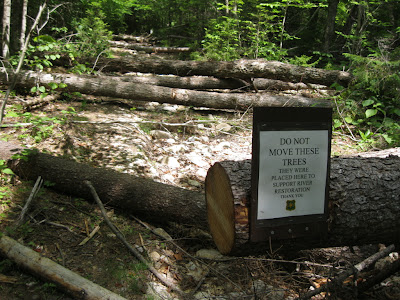 A few years ago many new trail signs were installed on the Waterville trail network. 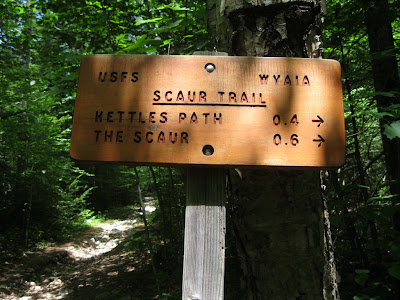 The crossing of the Mad River on the Scaur Trail is usually problematical, but was pretty easy today. 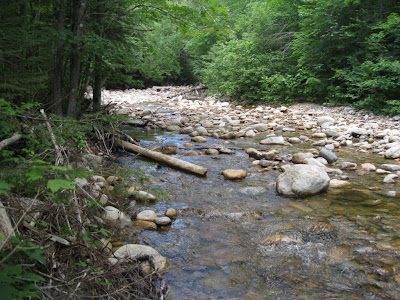 These lightly used WVAIA paths are a joy to walk on. 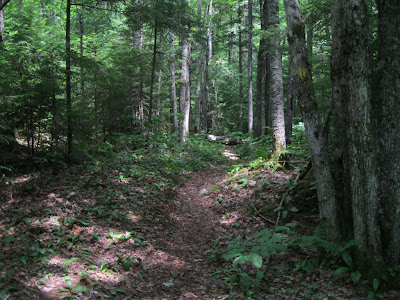 There are several steep pitches on the Scaur Trail, which rises 600 ft. in 0.6 mi. 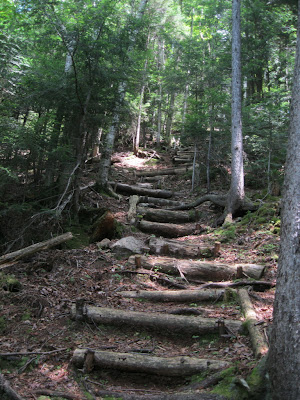 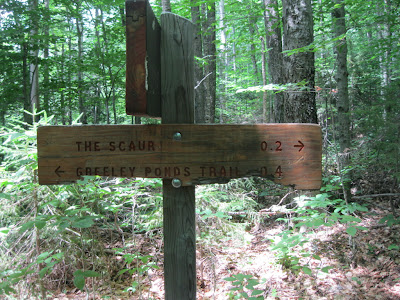 After a final steep pitch, I emerged on the ledgy outcrop of The Scaur, looking south across the upper basin of the Waterville Valley to Sandwich Dome. The trail to this viewpoint was first blazed in the 1880s by Watervillean Arthur L. Goodrich. 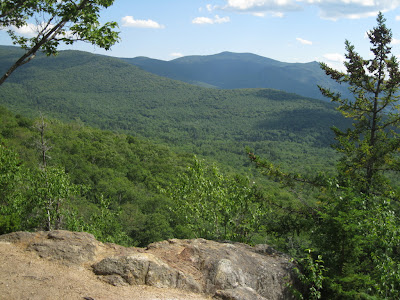 To the SE there's a neat peek at Middle and South Tripyramid and West Sleeper. 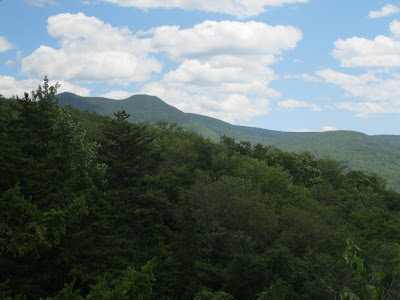 Mt. Tecumseh dominates to the SW. 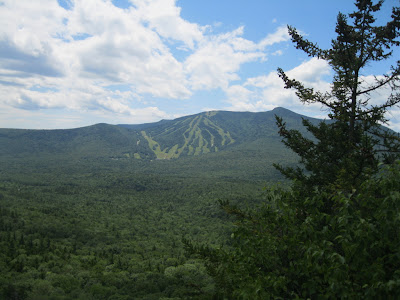 There's quite a dropoff at the front edge of The Scaur. 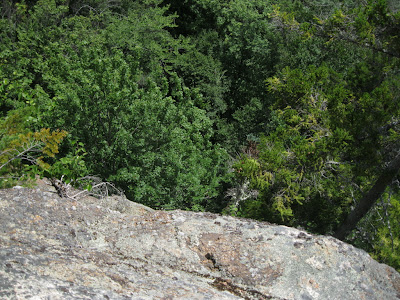 On the west side of The Scaur there are some additional views. Most interesting is the view up to East Osceola and its unusual Painted Cliff. There was once, briefly, a trail that looped up to the base of this cliff, but it was obliterated by the 1938 hurricane. Friends and I once snowshoe-whacked to the talus below the cliff, navigating through a maze of big boulders and deep holes, and were rewarded with some unusual views of the Tripyramid region. 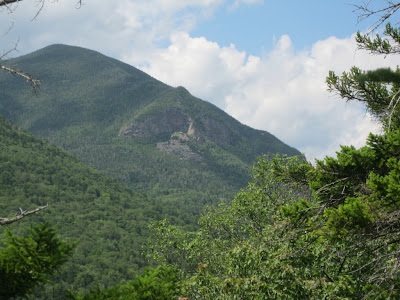 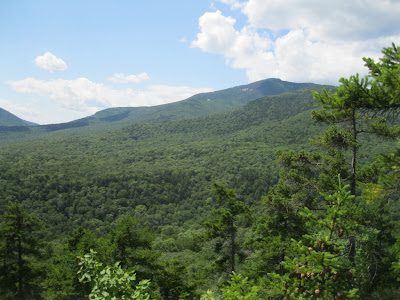 Back at the main outlook, a zoom on double-summited Sandwich Dome, with Jennings Peak on the R. 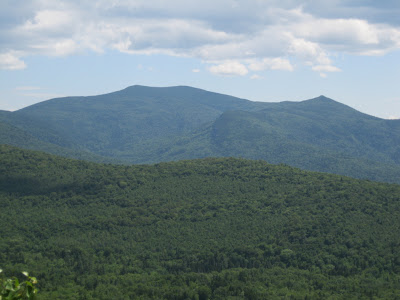 Chillin' on a fine summer afternoon. 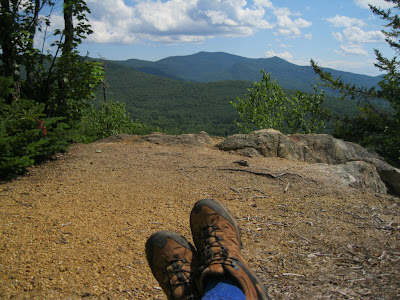 To complete the loop over The Scaur, I descended the delightful Kettles Path, which dates back to the 1890s. 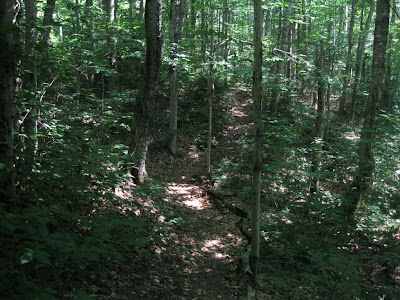 Back on the Livermore Trail, I made a side trip on an old logging road and a herd path to a location on Avalanche Brook known as Swazeytown. This was the site of a homestead cleared by Ebenezer Swazey in 1841. Many years later, it was the site of a dam used by loggers to store water for log drives down the Mad River. The loggers called the place, Crazytown. Remnants of the dam can still be seen in the brook. 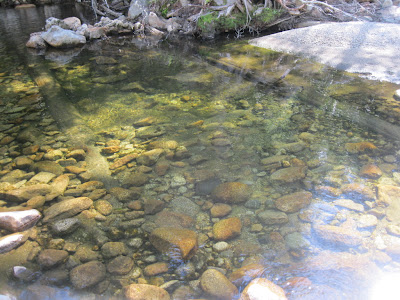 There's a neat open area here along the brook, with some new rocky rubble deposited by Irene. 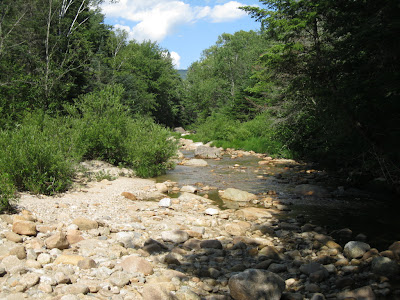 I followed moose paths to a nearby beaver pond, which was patrolled by a loud pair of Belted Kingfishers. 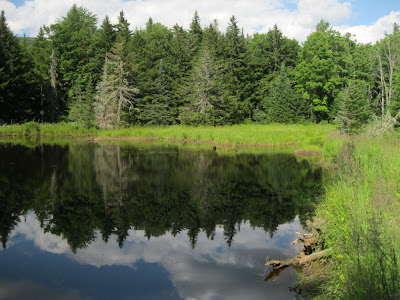 Late afternoon on the Livermore Trail. As I was strolling here, two hikers passed me at a fast pace. They had done the Tripyramid slides loop, and I was the first hiker they had seen all day - in July! They were also the first trampers I had seen on my shorter loop, which included a lengthy sojourn on The Scaur. 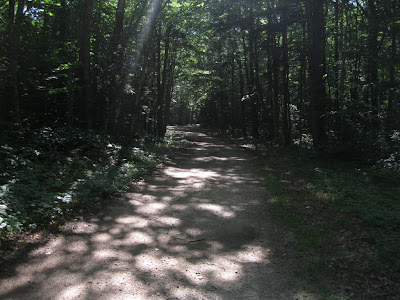 I made the 0.2 mi. side trip on the Big Pines Path to see its namesake trees, which tower on the bank of the Mad River. 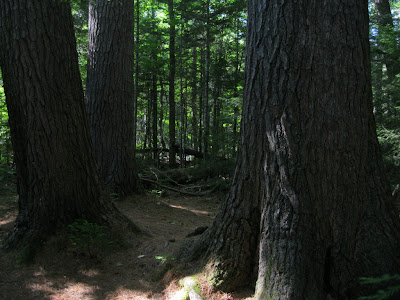 Right behind the pines is a peaceful river scene. 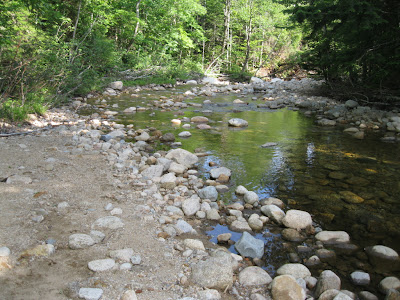 I crossed the river and made a short bushwhack to an abandoned beaver meadow I had seen on Google Earth. 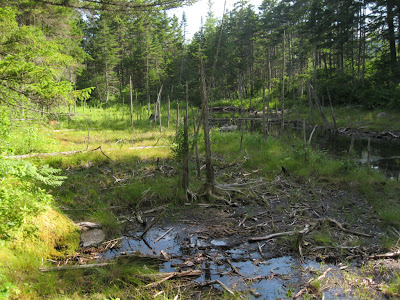 My last short side trip was on the Boulder Path, which makes a normally difficult crossing of Avalanche Brook at the start. Today it was easy to hop rocks, giving me a different-than-usual perspective on the big rock for which the trail is named.

Every time I visit Waterville, I gain renewed appreciation for its great network of trails (mostly maintained by the Waterville Valley Athletic and Improvement Association) leading to many interesting features, with possibilities for numerous loop hikes. In that sense, it's similar to other local trail networks in Randolph, Wonalancet and Shelburne. Each of these places can provide many days of pleasurable tramping, away from the crowds. 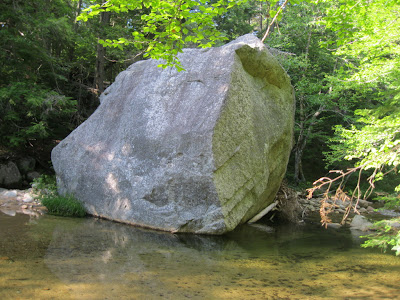