On a perfect spring day - sunny, cool, breezy, and virtually bugless -  dedicated volunteer trail maintainer Dave Stinson and I headed out for a day of work on the lower mile of the Passaconaway Cutoff. Dave has worked with me on several trails in the Adopt-a-Trail program for about 10 years. He is a Forest Service-certified crosscut sawyer and now helps teach workshops in that fine art. Along with several other volunteers, we maintain Passaconaway Cutoff - a key link in the interesting northern route to Mt. Passaconaway - on behalf of the AMC Four Thousand Footer Club.

There was only one other vehicle in the lot when we set off on the Oliverian Brook Trail mid-morning. 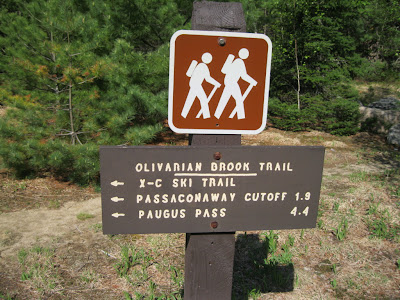 There were quite a few painted trilliums on the lower part of the trail. 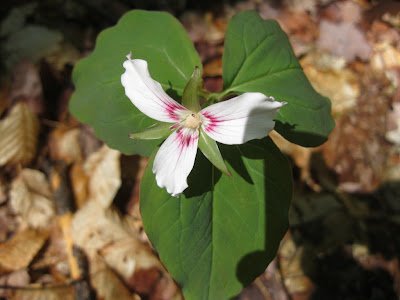 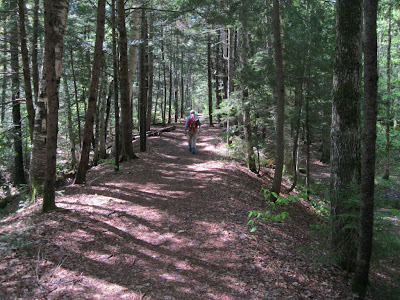 Beavers have been very busy along the northern part of the railroad grade. The ponding and partial flooding of the trail is the most extensive I've seen here over the last few years. You can pick your way along the edge of the trail, but wet boots are a possibility. 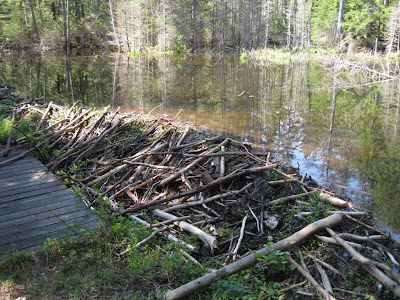 Dave dug a little channel to try and drain some of the water off the trail. 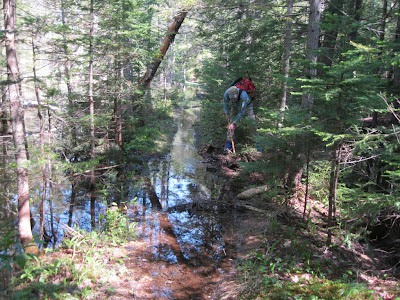 Oliverian Brook was in good flow after several days of rain. 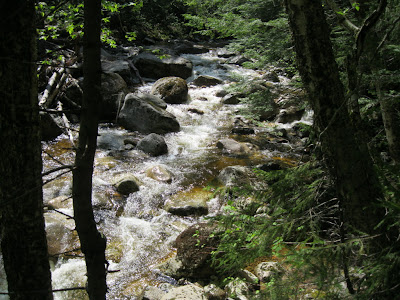 Entering the Wilderness at the 1.6 mile mark. 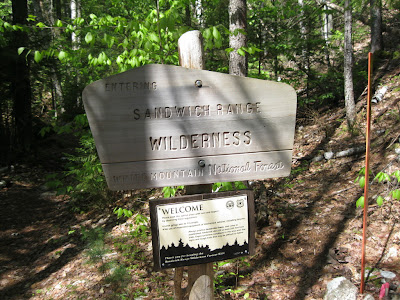 Crossing this side-sloping stream just past the Wilderness sign requires some fancy footwork. 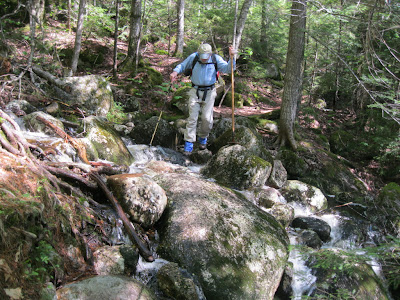 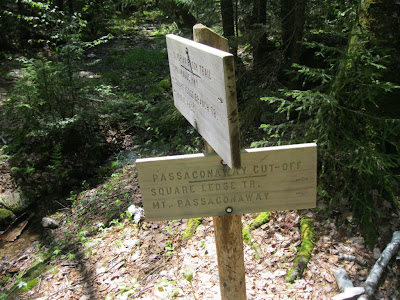 A half-mile in, the Cutoff crosses the west branch of Oliverian Brook. This is never an easy crossing to make with dry boots, and on this day we waded it with Crocs. 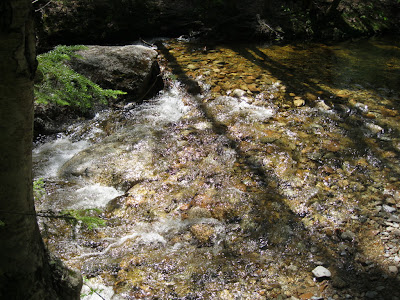 Not far beyond the crossing the Cutoff leads through a nice hardwood forest. Today it was a tunnel of fresh spring greens - in the brilliant sunshine the scene was like an Impressionist painting. 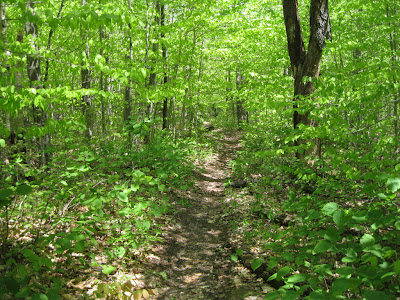 Dave cleaning out one of the Cutoff waterbars. He uses a garden hoe, and I use a hazel hoe (also called a grub hoe), which has a broader, heavier blade and shorter, slightly curved handle. By bringing both tools we have more flexibility to deal with the vagaries of different size waterbars. 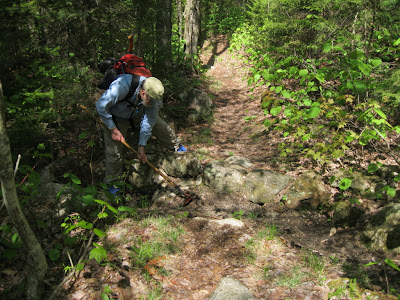 We cleaned drainages, took out a few blowdowns, and did some brushing up to the 0.9 mile mark of the trail, where it turns left and climbs away from the west branch of Oliverian Brook. A short overgrown path leads ahead here to a nice spot on the brook, where we always take a break when working on the Cutoff. 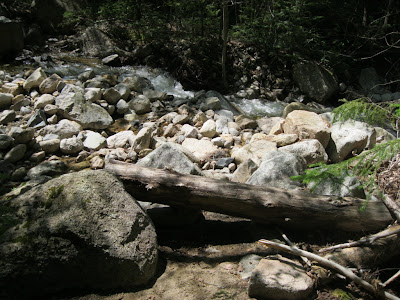 We checked out a nearby cascade. 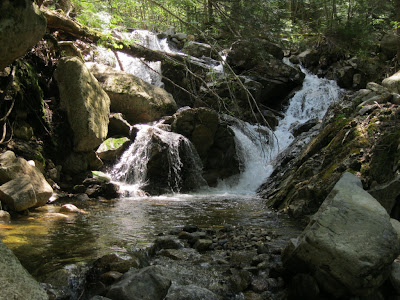 We also scouted another 0.2 mile up the trail and found no blowdowns or brushing needs. We left the upper 0.6 mile of the Cutoff, which has many waterbars, to a crew of four (including Dave) led by Rick Neville, coming up two days later. A little ways up from the brook there's a peek back at Hedgehog Mountain. 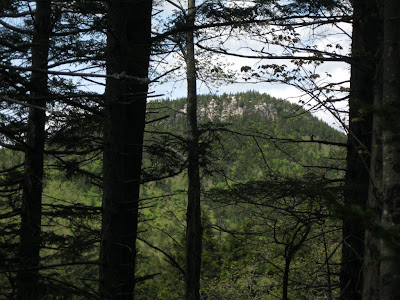 The trail passes by this neat overhanging boulder. 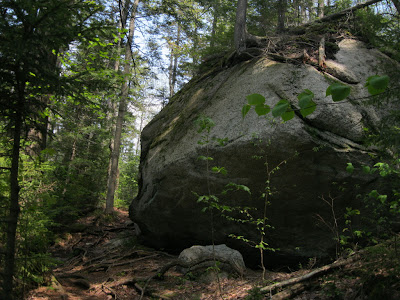 Heading back down through the newly-leafed hardwoods. 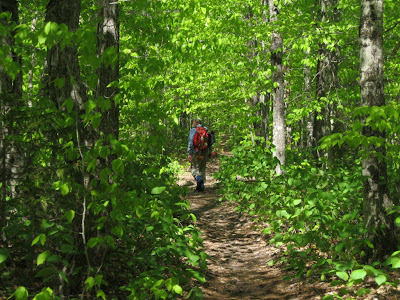 Dave wading back across the west branch of Oliverian Brook. 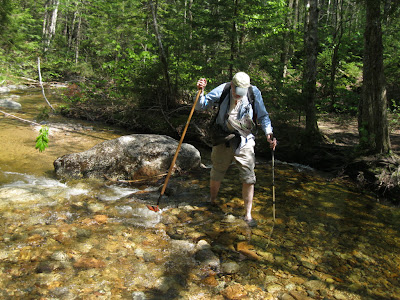 Before heading out, we treated ourselves to a bushwhack to a beaver bog west of Oliverian Brook. The first part of the whack was through open hardwoods, though it got a little thicker beyond here. 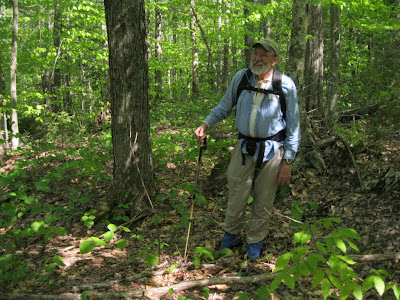 I'd been to this bog a couple of times in winter, and, as I remembered, from its edge you have a majestic view of Mt. Passaconaway. 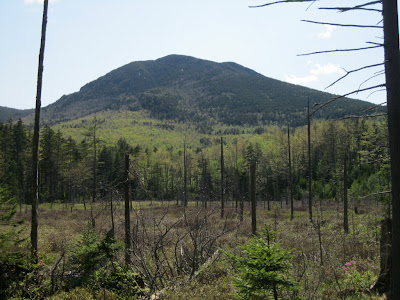 On the L, Passaconaway is flanked by Nanamocomuck Peak, the highest of the mountain's several southeastern spurs. 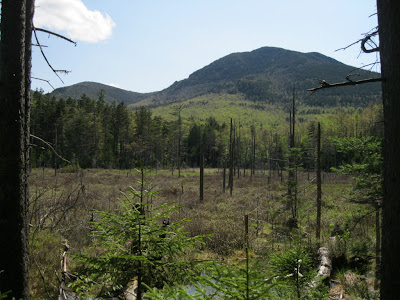 A small inlet brook flows into the bog. We didn't have time to explore the other side to see if there was an old beaver dam at the outlet. 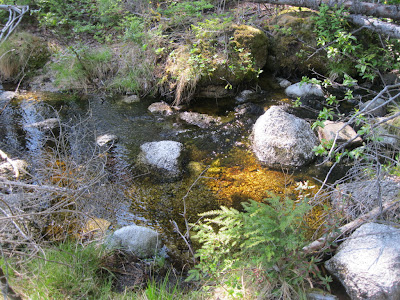 A closer look at Nanamocomuck, scarred by a slide on its northern flank. The Square Ledge Trail skirts along the base of this slide. 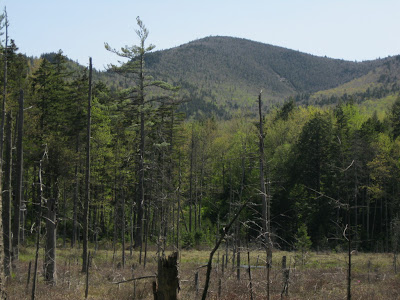 Farther along the shore the sheer face of Square Ledge came into view to the L of Nanamocomuck. Unique views from this bog edge! 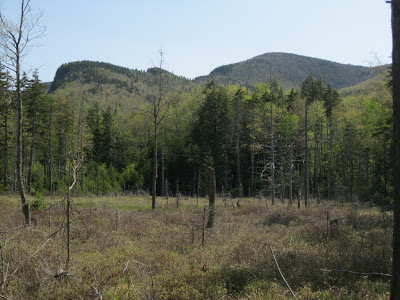 On the bushwhack back to the trail we stopped to admire this large hemlock. Once back on the trail, a mellow hour's walk brought us back to the car, ending a fine day on the northern flank of the Sandwich Range. 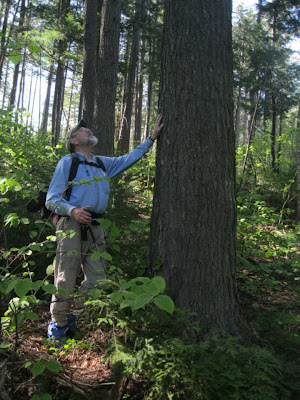