An afternoon hike to Bridal Veil Falls on a day when gloomy skies broke for some sunshine around 2:30 pm. The Coppermine Trail, which was first blazed by AMC enthusiasts in 1881, starts with a 0.4 mi. walk up Coppermine Rd. from the parking area near Rt. 116. At a hiker symbol sign, the trail turns into the woods. 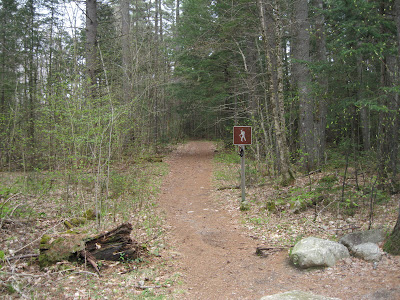 About a mile in, where the trail first comes by Coppermine Brook, is the plaque the actress Bette Davis had placed on a rock in the stream, in memory of her husband Arthur Farnsworth. Davis visited Sugar Hill often, and in 1941 she premiered her movie "The Big Lie" in nearby Littleton. She met Farnsworth at Peckett's, the inn where she was staying, and, the story goes, intentionally got lost on this trail so he would come looking for her. Romance blossomed, they were married, but he died a few years later from head injuries sustained in a fall. She had the plaque placed here many years after that. 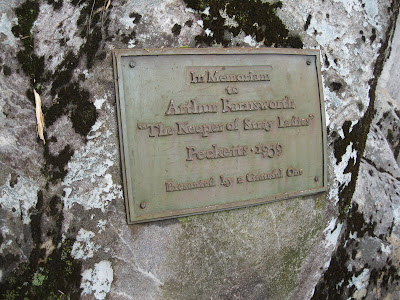 Another quarter mile up the trail is this pretty ledgy waterslide. 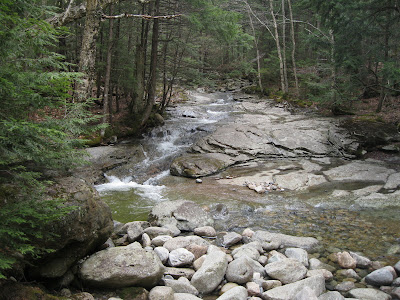 Presumably these iron pins were once part of a bridge. Could the old copper mine be out there somewhere in the woods? 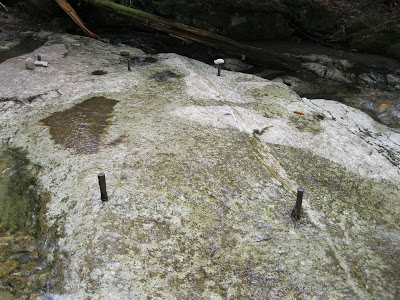 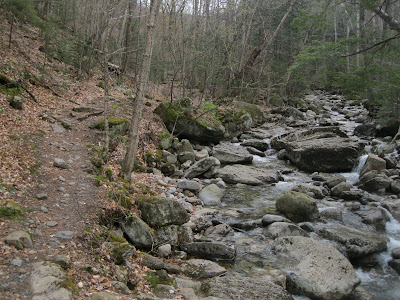 About two-thirds of the way to the falls the trail passes through a magnificent hardwood forest. 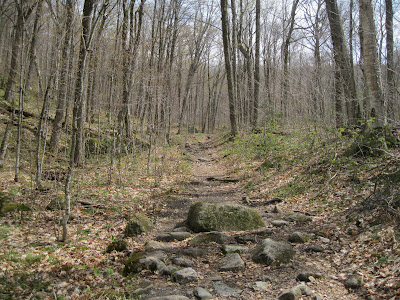 Looking up the slope. There are some fine old sugar maples in here. 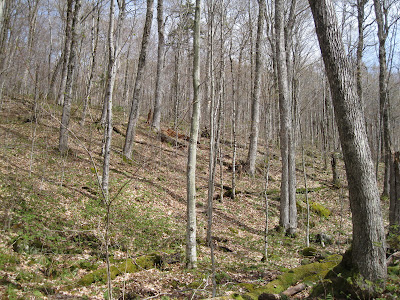 There were some patches of red trillium. 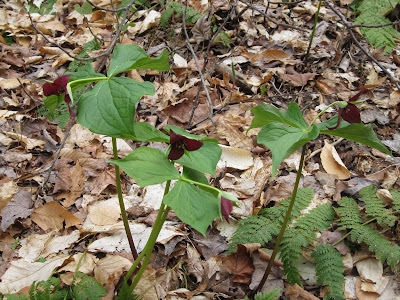 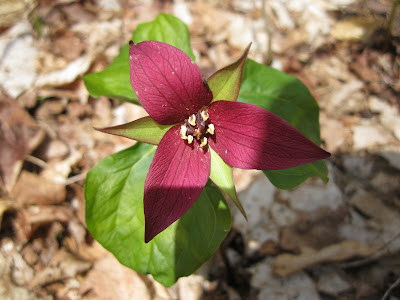 There were many trout lily leaves, but only one patch of flowers - too early? - and they were being bashful. 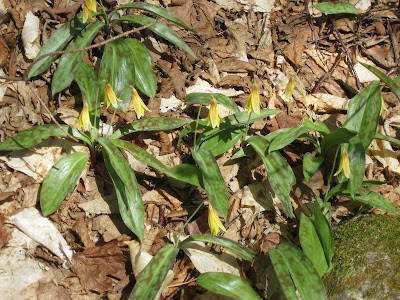 (On the way back from the falls, after a couple hours of sunshine, the flowers had opened up.) 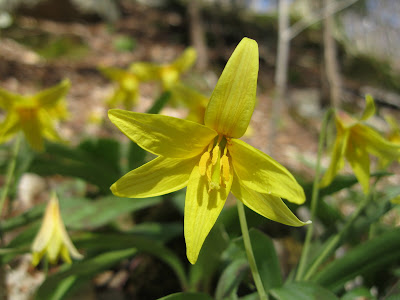 At 2.3 mi. there's a bridge over Coppermine Brook. 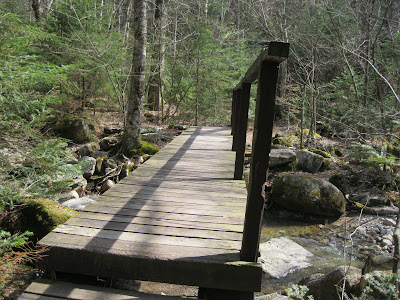 Just before the falls stands the Coppermine Shelter - a nice destination for an easy backpack trip. 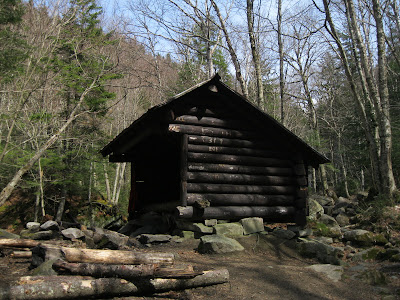 There's a small cascade and pool next to the shelter. 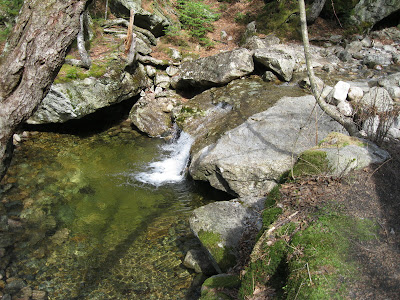 The trail ends at the base of Bridal Veil Falls. Several sitting rocks invite you to relax and enjoy the view. 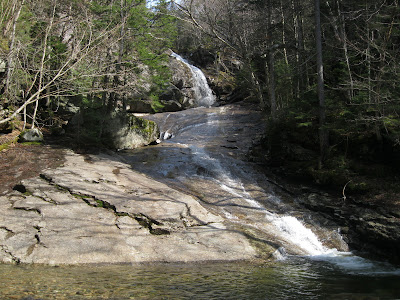 A zoom on the upper plunge of Bridal Veil. A beautiful scene! 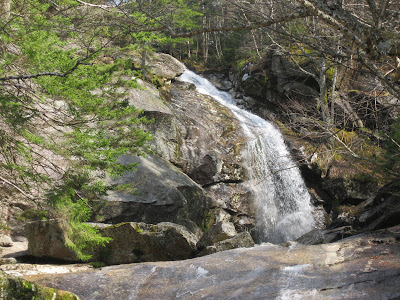 On the way back I bushwhacked to a tributary of Coppermine Brook for a look at Holden Falls, which I had only seen buried in snow previously. Holden Falls was mentioned with a photo in Sarah Welch's "History of Franconia." It was rediscovered a couple of years ago by lost waterfall guru Chris "NeoAkela" Whiton. You can read about Chris's exploration in this valley (accompanied by John "1HappyHiker" Compton) here. 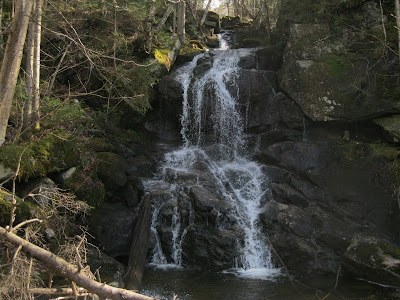 The sunlit walk back through the hardwoods was taken at a leisurely pace. 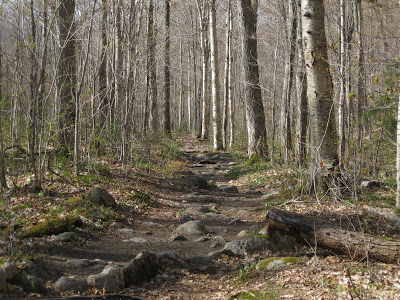 Late afternoon light in the hemlocks near the Bette Davis plaque. 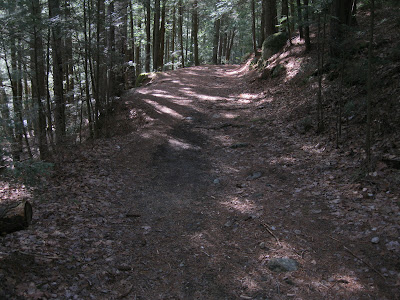 Finishing the hike under the tall pines of Coppermine Road. 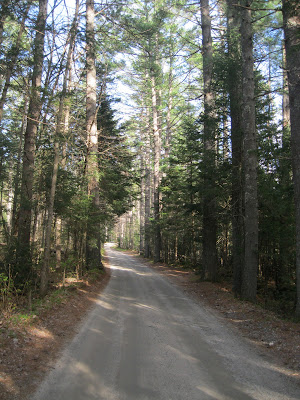