It's been a busy summer, so blog entries are running a little behind! On this warm, partly sunny day, Carol and I headed up to Airport Rd. (also known as Hazen Rd.) in Jefferson/Whitefield for a walk into the Pondicherry National Wildlife Refuge, one of New Hampshire's most unique natural areas, with a variety of ponds, bogs, marshes, swamps and boreal forest. Part of the larger Silvio O.Conte NWR, it's also known as one of the state's birding hotspots, though mid-August is not a prime time.

The parking lot for the Pondicherry Rail Trail, the 1.4 mi. access trail into the refuge, was almost full. It's a gentle stroll in, though the second half of the trail is open to the sky and plenty hot in the summer sun. 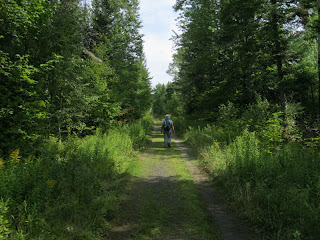 Near the trail's end we took a right at a fork and walked out to a viewing platform at the edge of
Cherry Pond, named in memory of Tudor Richards, longtime leader of the NH Audubon Society and the state's preminent ornithologist. 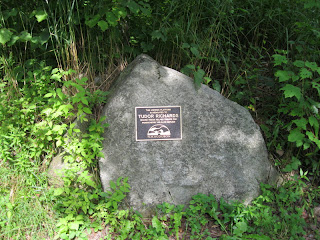 There was a group doing some birding at the platform. 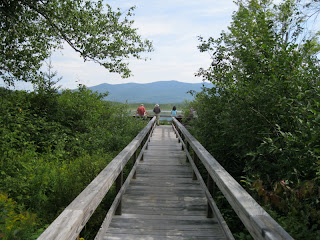 It was an AMC trip with the amazing Dave Govatski as tour guide. Dave, who worked many years on the White Mountain National Forest, is the volunteer manager of Pondicherry and has spent countless hours here studying flora & fauna (recording over 200 bird species), working on trails, and doing whatever else needs to be done. He is also the single most knowledgable person I know concerning both the natural history and human history of the White Mountains. And, he was the first hiker known to have redlined all the trails in the AMC White Mountain Guide, finishing up in 1997. But Dave took it a few steps further, redlining trails throughout the state - including local Conservation Commission trails and the like - and also walking most of the abandoned routes in the Whites.

In the photo below, Dave is the guy peering through a spotting scope at a loon with young out on the pond. 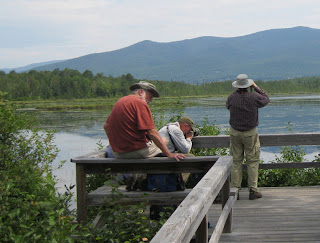 From the platform there was a beautiful view across Cherry Pond to the Pliny Range, including Mts. Starr King, Waumbek and Pliny. 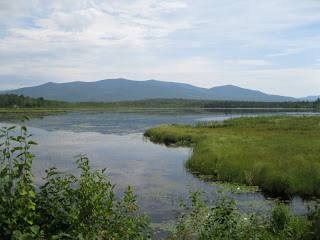 A short walk along the "Waumbek Link" trail and then the railroad tracks led to the first of two short, scenic paths along the shore of the pond. The first is called the Shore Path. 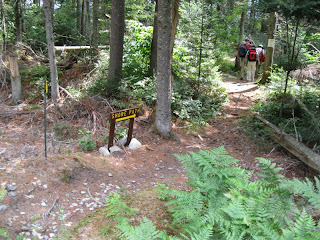 This line is still occasionally used for freight trains, so Pondicherry walkers should stay alert for the possibility of a passing train rumbling by. 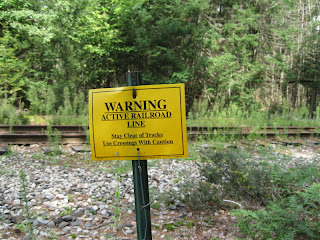 A view across the water to the Crescent Range in Randolph. 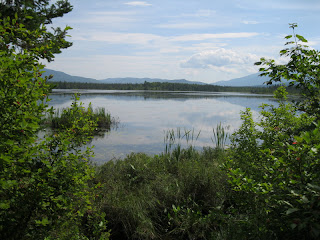 The premier view at Pondicherry is the lovely panorama of the Presidentials. 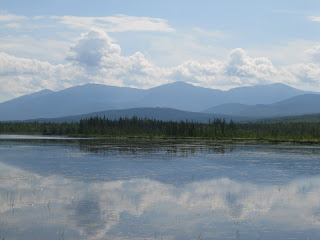 This area was noted as a National Natural Landmark long before it became a National Wildlife Refuge. The refuge now encompasses over 6,400 acres. 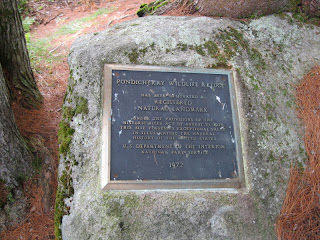 Another look at the Presys, with the Dartmouth Range to the R. 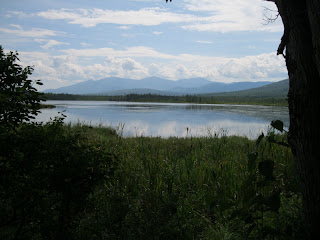 The second shoreside walk, farther up the tracks, is the Rampart Path, named for an "ice push rampart" - a mini-ridge along the shore pushed up by the expansion of pond ice. The Colonel Whipple Trail is the Cohos Trail, leading north from Pondicherry. 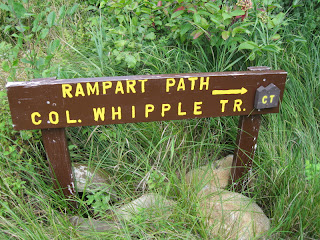 A view of Owl's Head and Cherry Mountain. 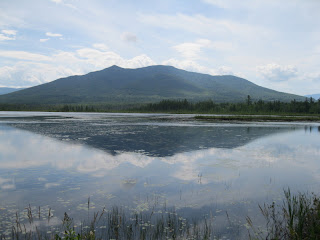 Across the tracks from the far end of the Rampart Path, we headed back into the woods on the Little Cherry Pond Trail. 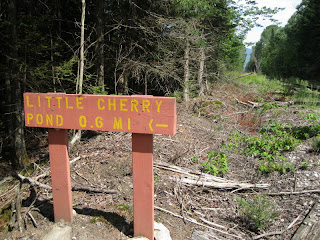 This delightful path, which has been adopted by our friends Joanne and Kevin Jones, meanders through beautiful conifer forest and makes a lollipop loop to its namesake pond. 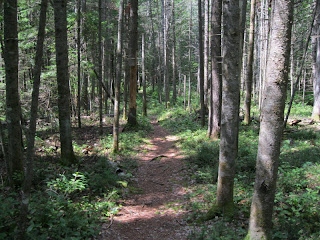 There are no mountain views from the small viewing platform at Little Cherry Pond, but the place has a primordial beauty. I was here at dusk once on a spring evening, and all kinds of strange and wild calls came from the pond and surrounding bog and forest. Rather spine-tingling, it was. 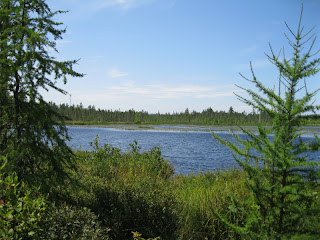 Carol caught this shot of a White Admiral hanging out on my pack. 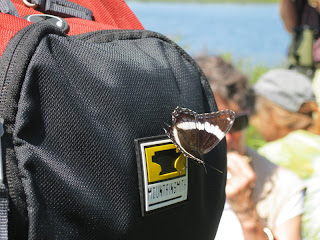 The other side of the loop trail was an equally pleasant ramble. 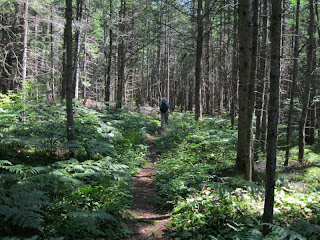 Back along the tracks, a cattail-and-Presidential vista. 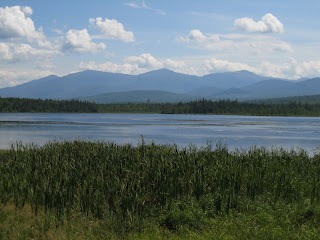 After a hot walk back along the rail trail, we drove around to a new trailhead off Rt. 116, one mile east of the Jefferson/Whitefield town line. The as-yet unnamed trail (Mud Pond Trail just
won't do, says Dave Govatski) leads 0.6 mi. down to picturesque, secluded Mud Pond. The last 1,000 ft. out to the viewing platform is on this impressive raised boardwalk through a boggy conifer forest. 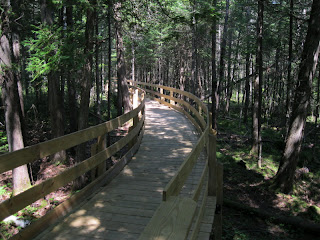 The platform is a wonderful place to relax and look for wildlife in the summer sun. Down in the bog were cotton grass, pitcher plants and sundews. I chatted here with Dave and his group for quite a while before heading back to the car. 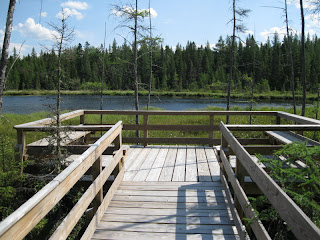 Back in the 90s I had bushwhacked on snowshoes down to Mud Pond. It's great to see this picturesque spot now protected in the Pondicherry NWR and accessible to all. 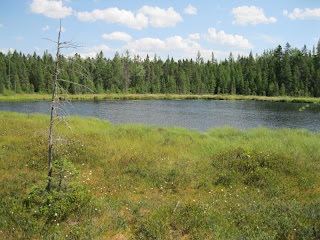