With a half-day free and gorgoeus sunny spring-like weather prevailing, I headed over the Kanc Highway for Potash Mountain, a ledgy 2700-ft. northern outlier of the Sandwich Range with great views of its higher neighbors. With the brooks opened up by recent thaw and rain, I opted not to use the normal trail approach from the Downes Brook trailhead, due to the major crossing of Downes Brook. Instead, I took the alternate approach up a logging road, starting from the Kanc 0.6 mi. west of the trailhead. There was room to park on the shoulder. Though the road had been in use earlier in the winter for logging, the entrance was now plowed in. There was an old snowshoe track leading up the road; even without it, in the morning the snow was firm. 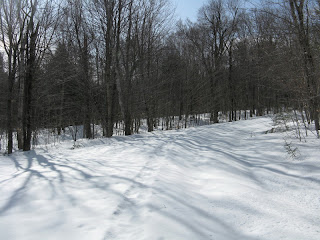 Just before reaching the trail crossing, 0.7 mi. from the Kanc, I passed a new clearcut up on the R, part of the ongoing "Kanc 7" Forest Service project. Though this cut was visible from the trail down through the trees, it had been moved farther down the slope away from the trail than originally planned, due to comments on the project submitted by hikers. (Upcoming projects that might affect hiking trails can be seen on the WMNF website.) 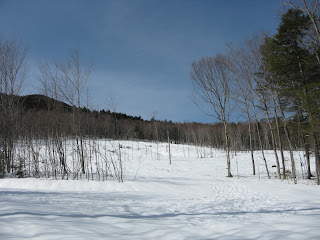 After a traverse through hardwoods, the Mount Potash Trail enters a beautiful conifer forest, and stays in it all the way to the summit ledges. There's a mix of red spruce and hemlock in the lower part, then it's mostly red spruce to the top. Conditions were good for 'shoeing, with a couple of inches of new wet snow atop a rock-solid base. Thankfully, the recent snow did not clump up on my snowshoes. 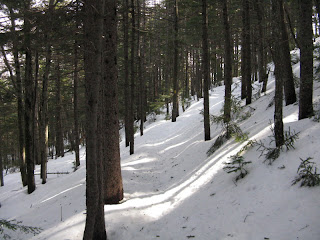 You get your first views from a ledge on a shoulder at 2200 ft. It offers a neat perspective up the Downes Brook valley to Mts. Passaconaway and Whiteface. 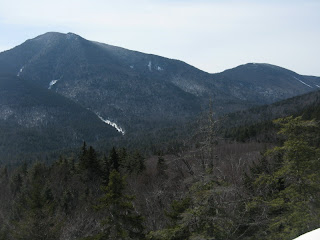 The sun was pouring down on this ledge, softening up the snow. Good day for shades and sunscreen. 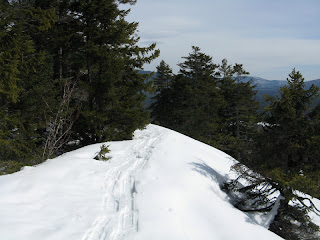 More nice softwood snowshoeing along a traverse on the SE face of the mountain. 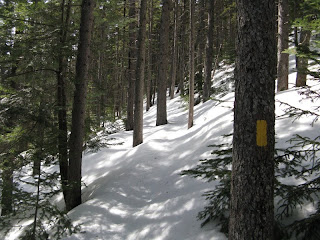 At the end of this section you emerge atop open ledges with an excellent view east to Chocorua, Hedgehog and Paugus. 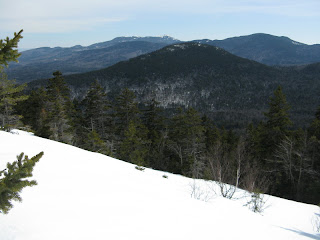 Mt. Paugus is centered in the Hedgehog-Passaconaway col. 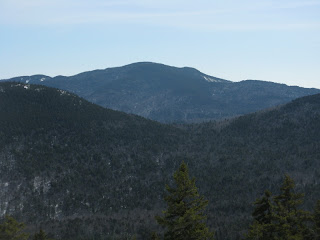 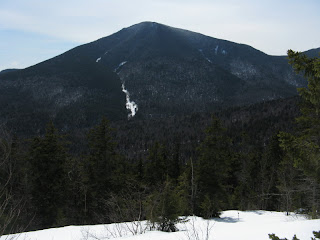 Past this viewpoint, the Potash trail turns R and climbs steeply up south-facing ledges. The cover was surprisingly good here, given the recent warm weather, though it was getting mushy in the strong March sun. 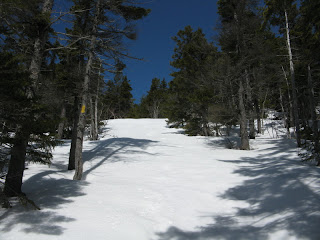 The trail adopter has done an excellent job blazing this trail. In the woods there were only two easy duck-under blowdowns. 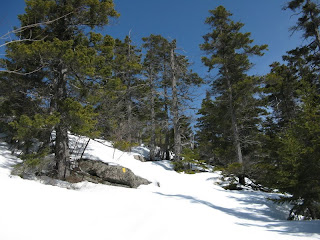 I reached the summit in about an hour and a half, with a couple of stops along the way. (The ascent is 2.2 mi. with 1450-ft. elevation gain.) Before settling in, I continued across and down slightly on the north side to a ledgy spot with a long view out over Church Pond to Mt. Washington. 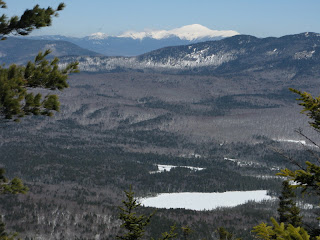 Big George was gleaming in the sun; part of Mt. Tremont in the foreground. 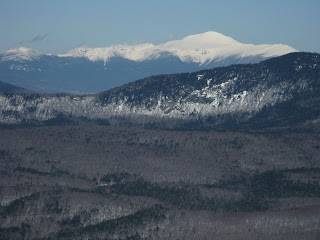 Also prominent in the northern view were Hancock and Carrigain. 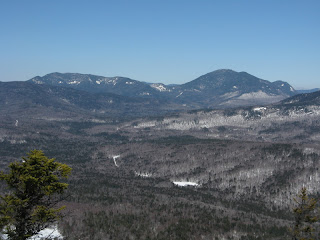 Carrigain is majestic from almost any angle. 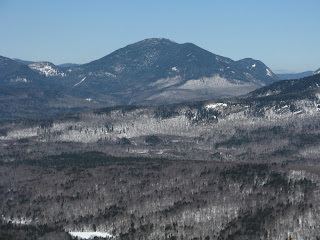 Then I repaired to my favorite spot on Potash, an open ledge area on the SW side facing up the Sabbaday Brook valley to the Sleepers and Tripyramids. 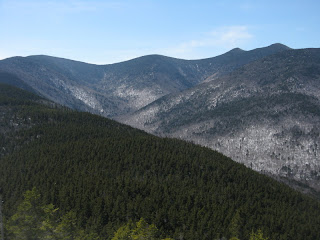 The peaceful view of The Sleepers - East Sleeper on the L, West Sleeper on the R. A few winters ago Cath Goodwin and I bushwhacked up the bowl between them, from the Sabbaday Brook Trail to the col. 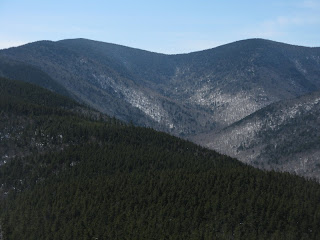 The woods were mostly open, and around 3000 ft. we found some marvelous old hardwood glades. 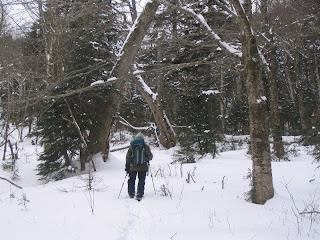 From my lunch spot I could see all the peaks of the Tripyramids, including the three main summits, Scaur Peak, the Fool Killer (blending in under North Peak), and the northern spur of the Fool Killer. 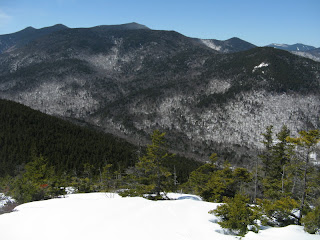 The northern spur, showing an open ledge patch that is a fine bushwhack objective. Scaur Peak is in back on the L, the Osceolas on the R. 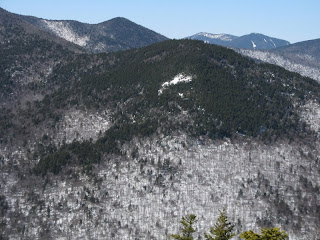 The view back towards Potash and Chocorua from the ledge on the northern spur. 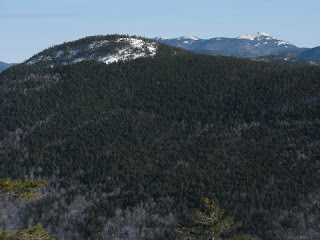 Looking south up the ridge from Potash, the spruce-wooded peak sometimes called "South Potash" is prominent. From Potash to East Sleeper, the trailless ridge is four miles long and could provide an epic bushwhack, though views would be few. I've only done one short section in the middle, on the bump south of South Potash, where there were some limited but interesting close-up looks at Passaconawy and Whiteface. 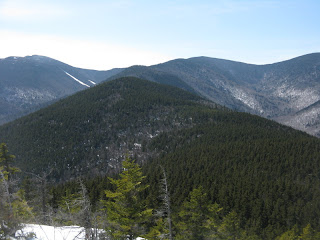 From my seat on Potash, I also had a fine view of Whiteface behind its northern ridge, with the huge slides on the western side of the ridge partly visible. 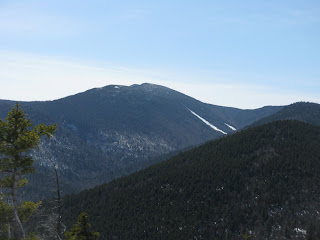 These slides are seen close-up from the Downes Brook Trail, far up the valley. A few winters ago I made the short whack up to the southern of the two big slides, where I had a view north down the valley. Potash can be seen just peeking over a slope on the L. Wildcats and Carter Dome in the distance. 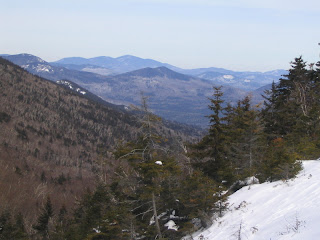 After an hour's stay on Potash, with just one other hiker coming up towards the end, I headed down, stopping to admire Passaconaway once again. 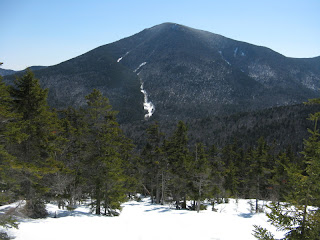 Back at the lower outlook on the shoulder, I made a short foray to another outcrop for an eastern view across the Albany Intervale towards the Moats... 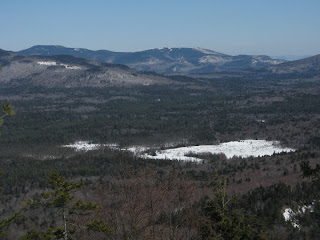 ...and NE to Bear Mountain. Then it was a quick trip down through the softening snow - with a temperature of 52 degrees at the trailhead. For a morning or afternoon hike, Potash is highly recommended! 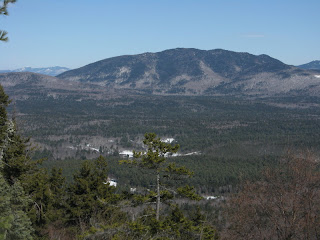