Day one of the two-day February thaw was too nice not to go out. After terminating a planned bushwhack in the Lafayette Brook area due to 38-degree temperatures and mushy snow (I made it about 150 ft. before throwing in the towel), I fell back onto an old winter favorite in Franconia Notch. 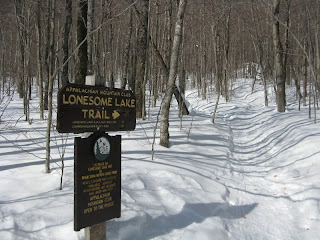 There was a wide and well-packed snowshoe track on the Lonesome Lake Trail. With the snow softening in the warm sun, it made for good spring-type snowshoeing. 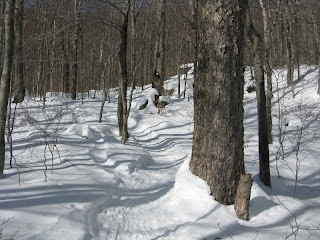 Snow-bombs were falling from the conifers in the open woods up on the plateau approaching the lake. 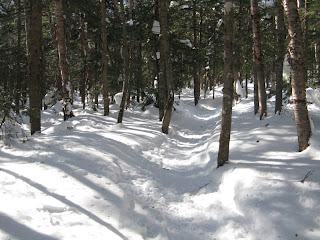 From the east shore, the Kinsmans were nicely lit in the bright late morning sun. 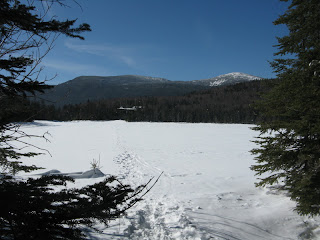 I parked myself here, using my pack as a seat, and lounged in the sun, gazing across at the Kinsmans for a long time. It was quiet and there was no one around. North Kinsman was looking fine in its snowy garb. 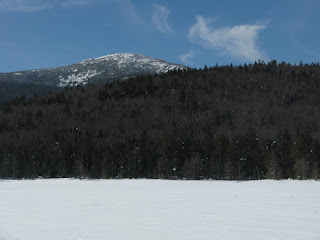 The broad mass of South Kinsman has a completely different look from its sister peak. 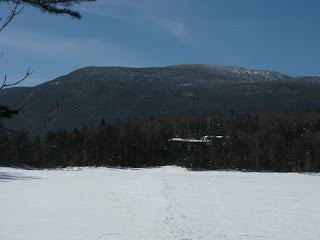 After a nearly hour-long sojourn, a couple of people did come by. Back behind the shore I chatted with hiker Dorothy Corey of Littleton, who was doing some redlining on snowshoes. She and another hiker had broken out the top layer of wet snow on the Lonesome Lake Trail up to Coppermine Col.

I continued along the east shore of the lake on the Lonesome Lake Trail, stepping out for a view of the trailless ridge that extends for miles SE from South Kinsman. I've heard of only two adventurers traversing this long, intriguing, wild ridge: Guy Waterman and J.R. Stockwell, each perhaps the preeminent White Mountain bushwhacker of his generation. 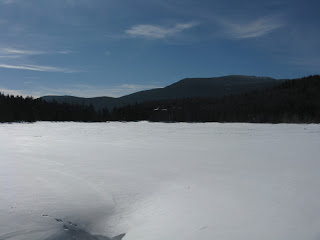 Feeling lazy on this 50-degree day, and being a little tired from the previous day's trek, I decided to pass on climbing to the Northeast Cannon Ball. Instead, I continued on the trail around the lake through the neat open bogs on the NW side, where there was a fine view of Mt. Liberty. 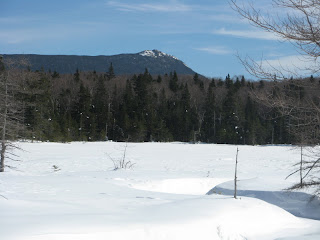 Looking up at the Northeast Cannon Ball. The broad cut of Coppermine Col. 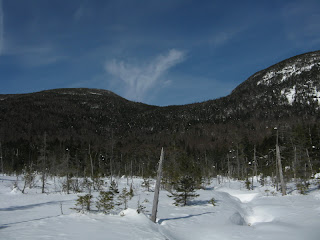 I took another sit-down break along the west shore, with the classic view of Franconia Ridge. 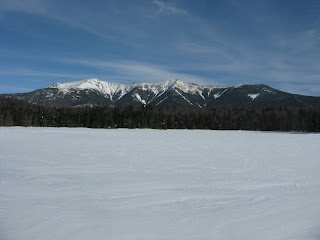 I took out the binoculars and studied the terrain on Mt. Lafayette... 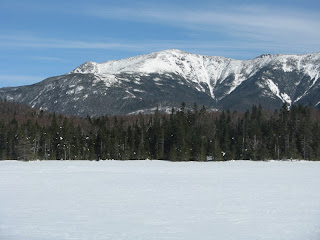 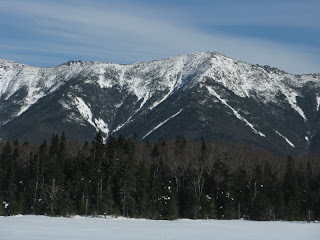 It's always fun to make fresh tracks across a frozen pond. 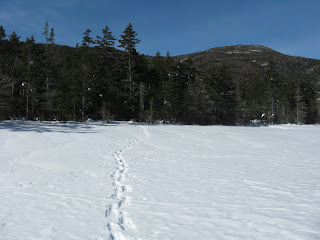 After descending from the lake, I made a short excursion north along the Pemi Trail from Lafayette Campground, plowing through some heavy wet snow. 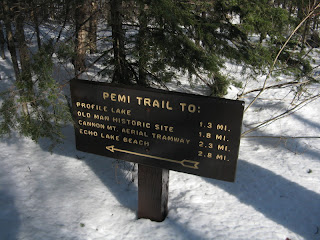 In about a quarter-mile the trail emerges in an open bog area with dramatic views of Cannon Cliff. 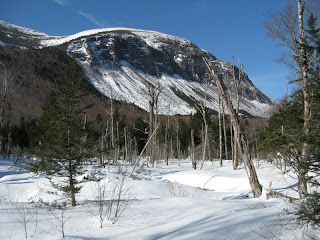 You also look straight up at the summit of Cannon, and its bulky southern shoulder. 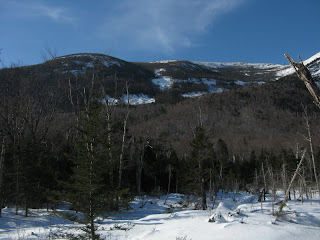 Going a few steps out into the most open bog, I was rewarded with an unusual perspective looking north into upper Franconia Notch. What a great day to be out! 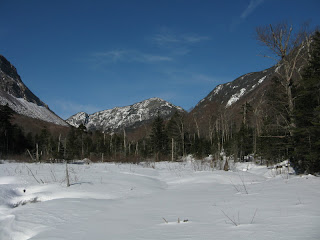