One of the best half-day snowshoe hikes in the Whites is the trek along the Mount Kinsman Trail to Bald Peak (2470 ft.), the little open ledgy dome halfway up the side of North Kinsman. The biggest issue with this hike in winter has been parking, or lack thereof. When the trailhead was moved a quarter mile south a couple of years ago, a new and spacious summer parking area was provided (along with the trail easement) through the generosity of the landowner. However, this lot has not been plowed in winter. But recent internet trip reports for the Kinsmans indicated there there was room for two cars at the entrance to the parking area.

Having the afternoon off on a gorgeous sunny, but cold day, I decided it would be worth checking to see if parking was available for Bald Peak. If not, there were other nearby options such as Bridal Veil Falls or something in Franconia Notch. Happily, there was room for two cars to park safely off the road, although that may not be the case after the Groundhog Day snowstorm. Some previous drivers had attempted to buck their way up into the lot - not recommended! 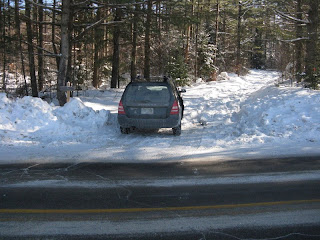 This trailhead is in the pastoral Easton valley; across the street there's a view over the fields to Cole and Cooley Hills. 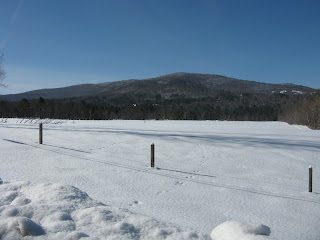 A sign marks the beginning of the trail from the summer parking area. 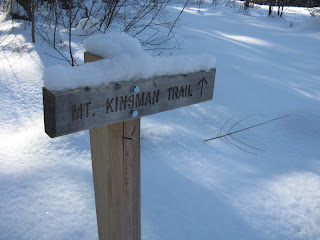 Thanks go to trail adopter Bruce Richards, who has been doing a fine job on the Mount Kinsman Trail, including some fresh blazing. 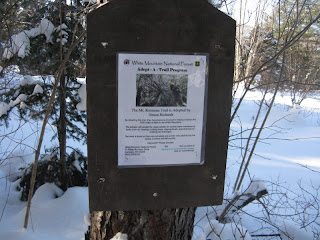 There was a perfect snowshoe track on the trail, with an inch or two of fresh fluffy snow on top. The new connecting section of trail leads through some nice hemlock woods. 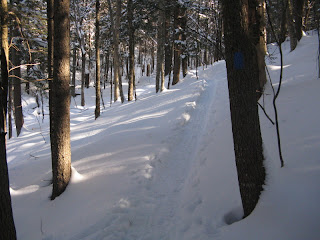 Shortly after rejoining the original trail route, you pass by this old sugarhouse. Hikers should note that the first 1.1 mile of this trail is on private land. 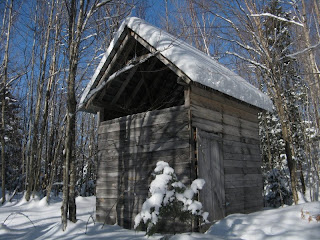 Though the temperature was only 9 degrees, the sun was pouring in on this easy-graded hardwood section. 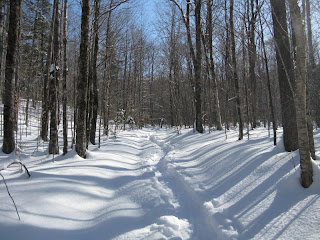 Just before a sharp R turn, the trail enters the National Forest. 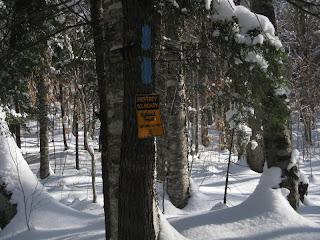 The trail climbs moderately through this fine hardwood stand. 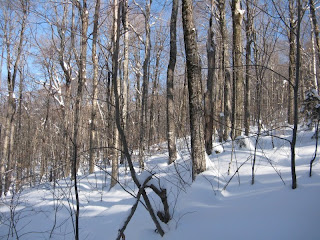 At 1.5 mi., just after passing the site of the old Kinsman Cabin on the L, the trail crosses a nameless brook, buried in snow this day, and ascends at a steady pitch, heading southward across the slope. 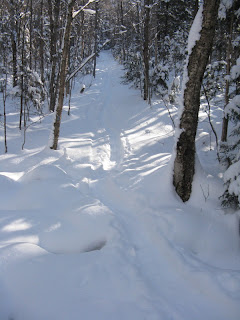 I always pause to admire this large trailside yellow birch. There are many of these old gnarled-crown trees on this slope. 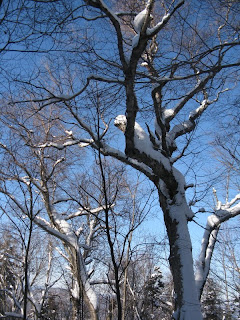 In summer, there is a small cascade where the trail crosses "Mossy Falls Brook." Nothing but a steep snow face today. 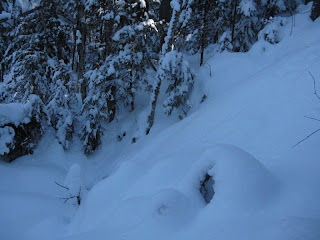 A spruce-lined corridor leads to the crossing of the north branch of Kendall Brook (also called Flume Brook), on which the Kinsman Flume is located. The side path to the flume was unbroken, so I didn't make the side trip today. 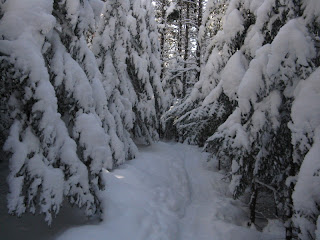 It's just a short distance farther to the yellow-blazed spur trail, 0.2 mi. long, to Bald Peak (Bald Knob on the sign). 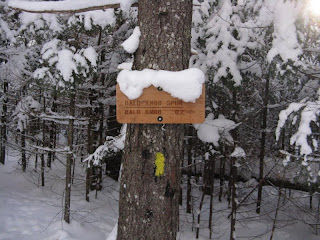 The spur trail meanders up, down and up through dense conifers, and abruptly emerges into the open near the top of Bald Peak. 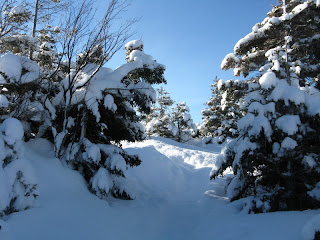 Here I had the first framed view of the rime-frosted crest of North Kinsman. 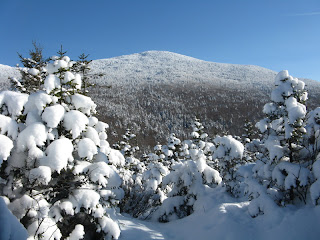 It was a spectacular winter afternoon on Bald Peak. Though the temperature was cold, there was no wind! I wandered over to the N side for this view of the distant, whitened Pilot and Pliny Ranges. Mt. Cabot is in the center. There were also good views out to the mountains in Vermont's Northeast Kingdom. 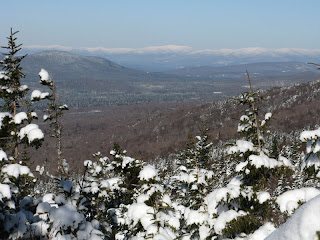 Most of Bald Peak is an open expanse of flat ledge. Here you can look across to the westernmost Cannon Ball (L) and a nameless hump just N of Kinsman Pond (R). 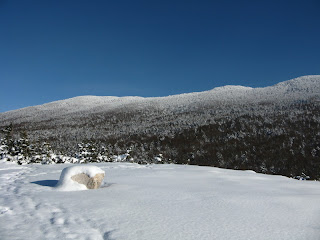 Farther to the L is the NW (Mittersill) Peak of Cannon Mountain. 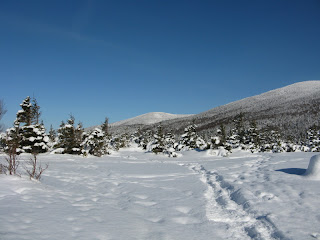 Looking across the ledges to North Kinsman. 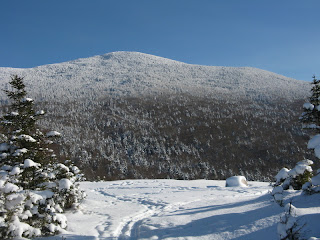 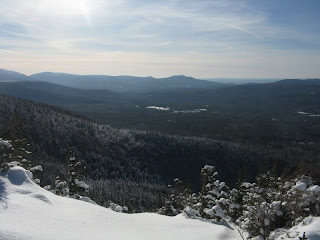 Mt. Moosilauke dominates to the S, with Mt. Clough on its R. It's interesting to note that just four NH 4000-footers can be seen from Bald Peak (Moosilauke, North Kinsman, Waumbek, Cabot), while the tops of all five Vermont 4ks can be spotted. 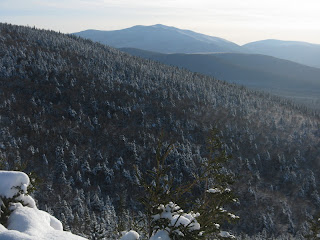 After spending more than an hour atop Bald Peak, I took some parting shots of North Kinsman and headed home. 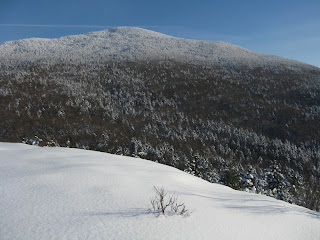 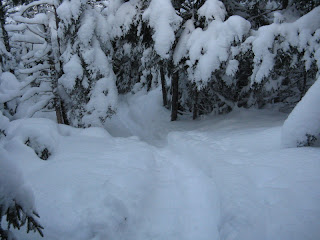 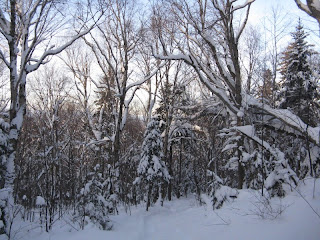 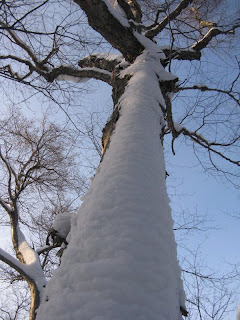 I liked this view of the trees through the trees. 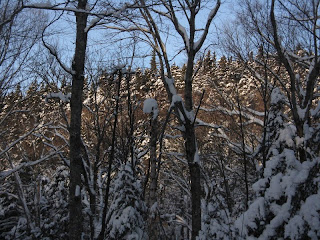 Near the sugarhouse, the last glow of a beautiful winter afternoon. 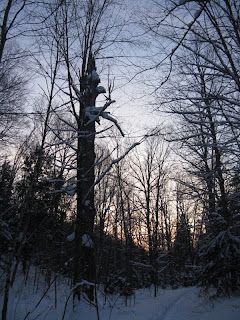