With 10 to 12 inches of new snow and blue skies south of the notches, the time seemed right for a snowshoe trek to Dickey Mountain on the west half of the popular Welch-Dickey Loop. I figured the trail could already be partly broken out (it usually is soon after a snowfall), and even if it wasn't, I could at least break trail solo up to the first ledges and take it from there.

One of the drawbacks of going right after a storm is that sometimes the parking lots are not yet plowed. This old pickup looked lonely out in the middle. I partly shoveled out a spot beside the single lane that had been plowed through the parking loop.

As I was getting ready to go, I had a nice chat with Scott, a customer of my store who was heading up with his dog. I never did catch up to him, but he did a nice job packing out the trail, following two backcountry skiers (from the pickup truck) who were ahead of him. 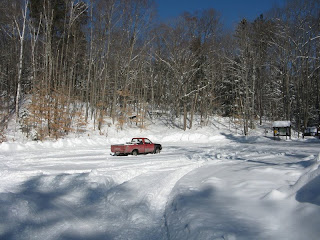 The hikers of the Chiltern Mountain Club are the adopters of the Welch-Dickey Loop - thank you! 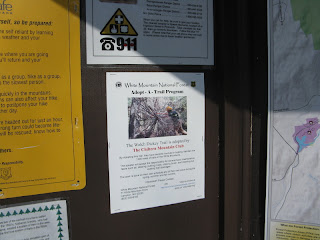 The trail to Dickey goes L as the Welch branch heads R. 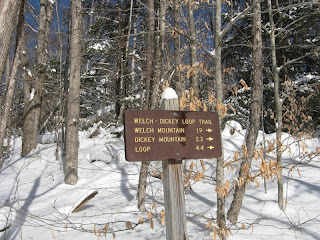 The first mile of the trail to Dickey climbs at easy to moderate grades through hardwood forest. 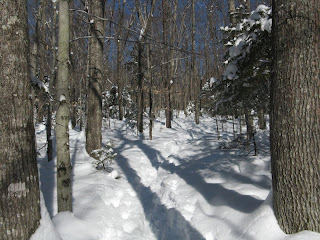 The sun was pouring down from a cobalt sky. 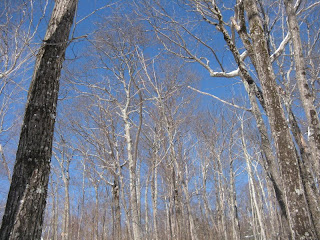 Partway up, you catch glimpses of the first Dickey ledges through the trees. 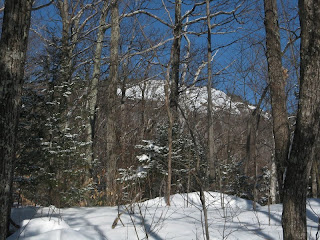 At the top of the hardwood section you abruptly enter a shady spruce forest and climb alongside interesting ice formations. 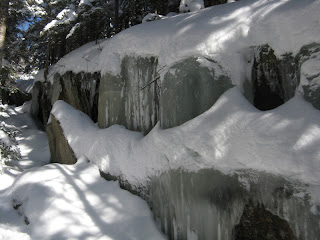 After a couple of short switchbacking scrambles, I emerged in the brilliant sun on the first ledge, a monstrous slab that plunges into the bowl-like valley between Dickey and Welch. The snow cover was a little thin and crusty (but quite safe and doable with good snowshoe crampons) on this windblown ramp. This is potentially the trickiest spot in winter on the ascent of Dickey, and after a thaw-freeze cycle crampons could be required here, as well as on several other spots along this ledgy loop. In those kinds of conditions this can be quite a challenging winter trek. 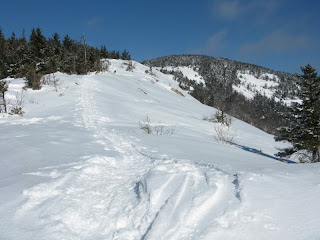 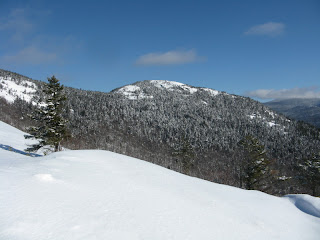 As I approached the upper end of the big slab, I heard a couple of whoops in the distance. Looking ahead to the upper mass of Dickey, I watched in amazement as two skiers swooped down a huge snowy slab and down into the woods below. 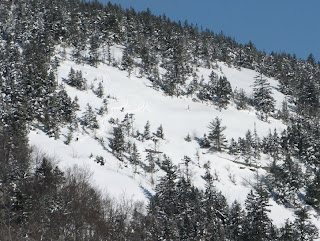 Looking back down the big lower slab, with a wide view to the south extending all the way out to Mt. Kearsarge. 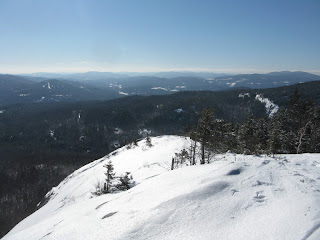 With powder conditions, the Dickey side of the loop is a joy to snowshoe, meandering up snow-blanketed ledges fringed with spruces. 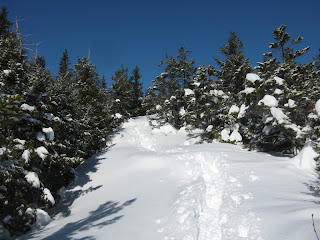 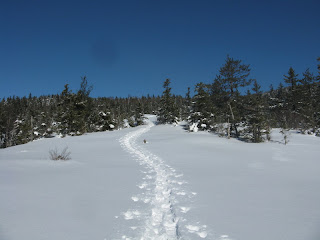 A picturesque red pine beside the trail. 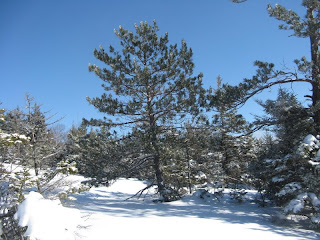 Well up on the mountain, the trail cuts across the top of a huge sloping slab, in winter transformed into a vast snowfield. Looking SW, you see (L to R) Mts. Stinson, Carr, Kineo and Cushman. 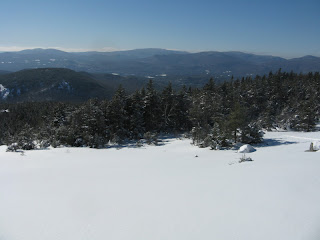 Higher up, another ledge offers a great perspective on Mt. Moosilauke. 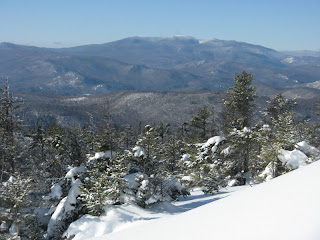 Approaching the summit, I went a few yards off-trail through deep powder to a scrubby ledge with a sweeping NW vista. Fisher Mountain is in the foreground. 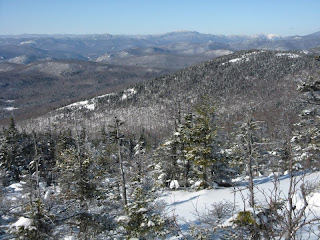 A zoom on the Kinsmans and Cannon Balls. 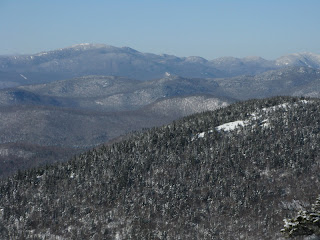 Cannon and the Franconias, just emerging from a morning cloudbank. 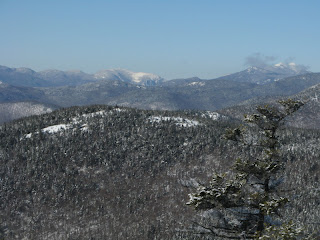 From the east edge of Dickey's mostly open summit, you get an interesting look across at Welch. Right near this vantage point is where the skiers took off for their run down the south face of Dickey. I could see Scott's snowshoe tracks weaving up Welch from the col, but some steep spots with thin cover looked uninviting, and confirmed my decision to return down the more snowshoe-friendly Dickey side of the loop. 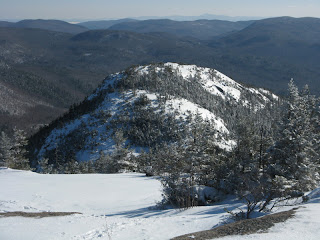 The sprawling bulk of Sandwich Dome takes up a lot of space to the SE. 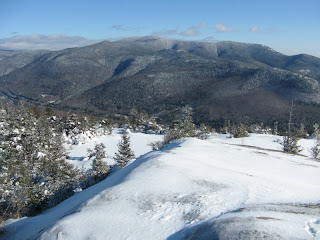 To the NE is a spread of the Tripyramids, Sleepers and Whiteface. 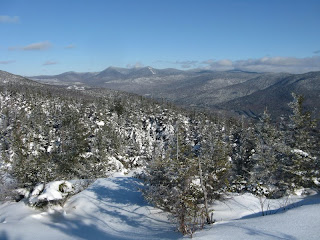 A closeup of the Tripyramids, with both the South and North Slides visible. 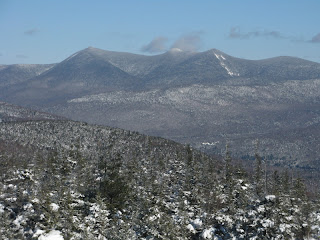 I especially like the view north to the wild, trailless ridges on the south side of Mt. Tecumseh. Some seldom-visited country out there. I chose this snowy ledge for my lunch spot - surprisingly, there was virtually no wind, even facing north. It was comfortable enough to sit for a spell on my pack. 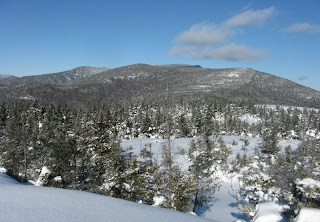 Heading back down off the summit, the trail provided this fine view NW. 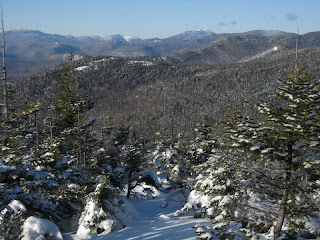 A beautiful snowshoe track coming down the wide sunlit slab south of the summit. 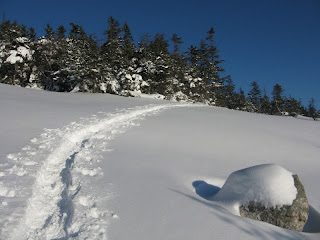 A perfect day and place for 'shoeing. 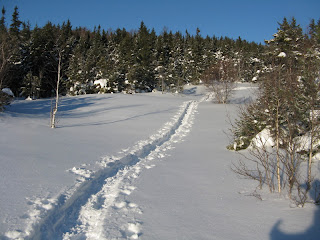 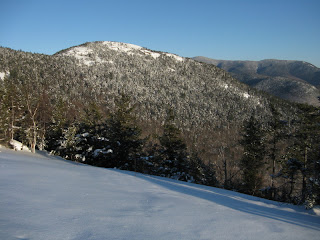 Looking back up the great lower slab. The skiers' tracks show up well on the snowfield-slab on the R side of Dickey. 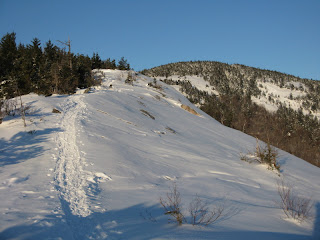 An easy descent through the hardwoods completed a marvelous snowshoe journey. Near the bottom, uber-hiker Pam Bales of Thornton caught up with me, having taken a late afternoon snowshoe spin around the loop - a nice ending to the day. 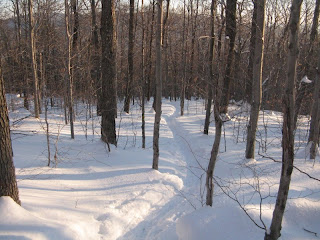