John Compton and I rendezvoused off Deer Hill Road in North Chatham, NH, just S of Evans Notch, on a glorious Indian Summer day. Our plan was to make a leisurely 5-mile circuit on the Chatham Trails Association's Conant Trail over Pine Hill and Lord Hill - two 1200-footers with fine views - and then perhaps do a second, shorter hike at the end of the day. The western and southern sections of this trail are on private land, while the northern and eastern parts are within the National Forest.

We parked on side road just off Deer Hill Road. Signage is minimal at this trailhead; the first section of the Conant Trail follows the road that leads E out across a beaver swamp on Colton Brook. 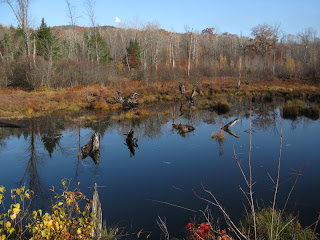 At 0.4 mi. we came to the loop junction, where two roads diverge. We took the R (S) fork, where beaver flooding has been reported this year. 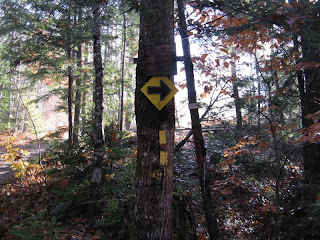 Morning fog was still burning off here in the Cold River valley. 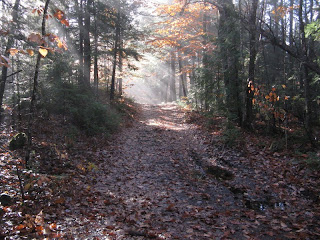 At 0.3 mi. from the fork we came to the beaver pond area, with a freshly built dam to the R. 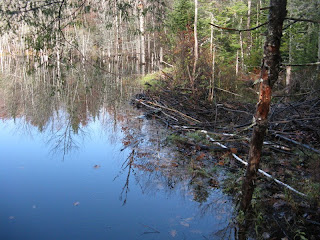 The trail/road was indeed flooded. To get through would require perhaps 30-50 ft. of wading in calf-deep water. We opted for a circuitous bushwhack to the L through brushy logged areas. 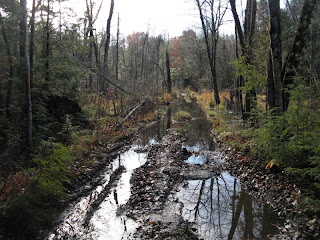 We turned L off the road by an old foundation, one of several seen along the route of this interesting trail. 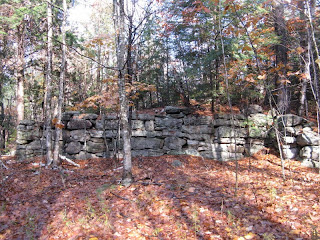 The trail began climbing through a bronzed beech forest towards the western ledge outlook on Pine Hill. 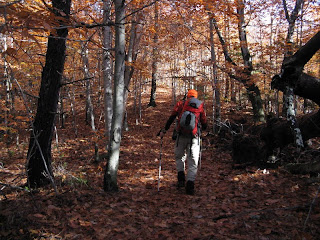 Pine Hill is a midget among White Mountain peaks, but it has some giant-sized views, especially looking across the valley to the Baldface Range. 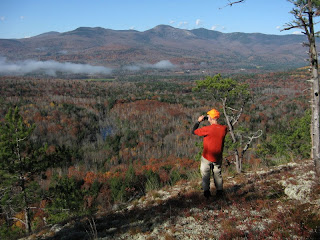 A closer look at the Baldfaces, which rise 2300 ft. above the Pine Hill outlook. 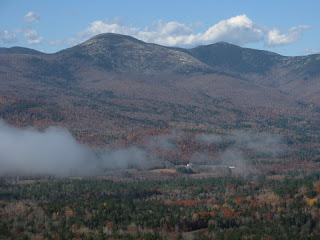 Off to the R we could see Mt. Meader and Mt. Moriah beyond nearby Deer Hill, which sported some late-turning oak foliage. 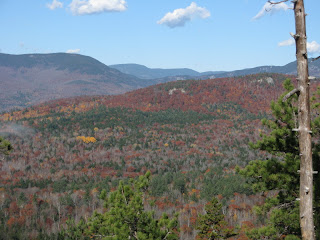 Looking S towards Kearsarge North, we could see fog drifting into the valley from the E. 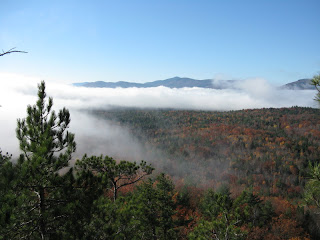 Picturesque red pines are typical of this low, ledgy terrain in the Evans Notch area. 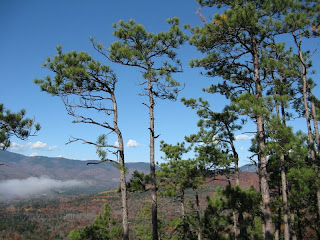 After a long stay at the outlook, the walk across the broad crest of Pine Hill was very nice, leading across pine-fringed ledges and through intermittent patches of woods. 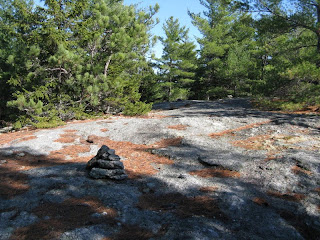 At the E end of the summit, open ledges provide a northward vista. 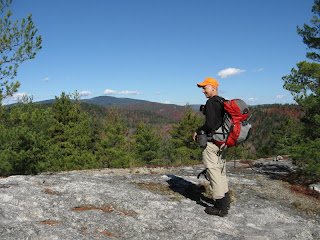 Butters Mountain (L) and Red Rock Mountain (R) are seen to the NE. 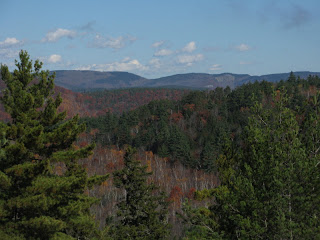 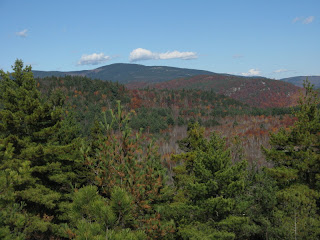 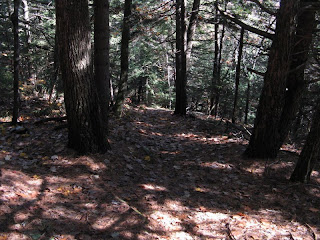 In the saddle between Pine Hill and Lord Hill we turned L on an old logging road that provides a shortcut to the Lord Hill mine. 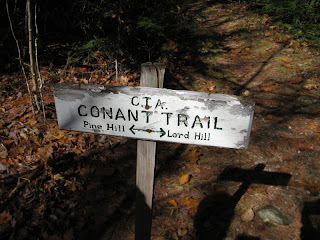 The old road soon joined the Mine Loop Trail, which we followed to the mine site. This part of Maine is noted for its mineral resources. The Forest Service allows hobby mineral collecting here, with hand tools only. Minerals include feldspar, quartz, topaz and garnet. 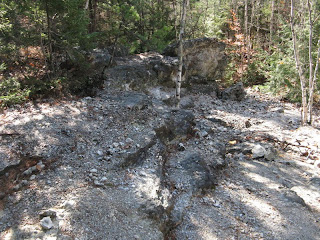 It's a short jaunt from the mine to the view ledges near the summit of Lord Hill. 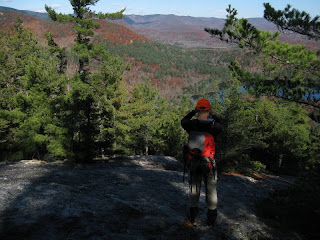 From a lower ledge there's a striking vista of the aptly-named Horseshoe Pond. 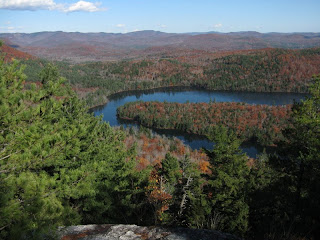 This perch also has a fine view into the valley of Red Rock Brook, with the great cliff of Red Rock Mountain at its head. 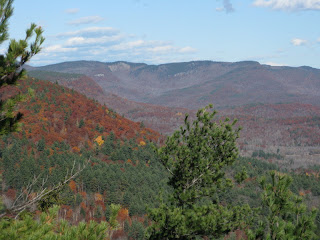 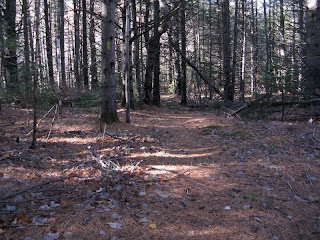 The northern link of the trail passes through abandoned pastureland along the flank of Harndon Hill, with old stone walls and foundations. 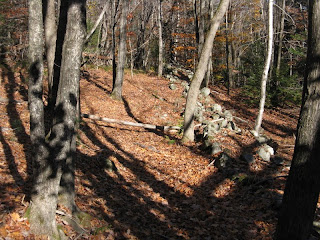 Just before returning to the loop junction, there's a pre-Civil War cemetery on the R. 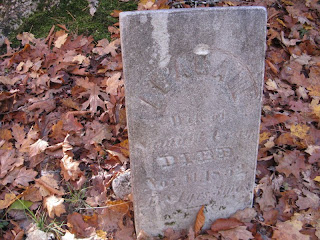 Nice afternoon light on the Colton Brook swamp as we approached the trailhead. 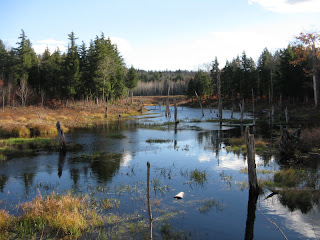 From here we made a short drive to our second hike of the day, the White Cairn Trail on Blueberry Mountain...
Posted by Steve Smith at Sunday, October 31, 2010