With an inch or two of fresh snow overnight and a generally cloudy forecast, a bushwhack plan with John Compton was postponed. Instead I opted for a half-day hike on the Snows Mountain Trail loop, one of the less-used of the many interesting local trails in Waterville Valley. The two viewpoints on this route are very humble, but it is a nice woodsy climb away from the crowds.

Parking for this trail is in the large lot at the base of the Snows Mountain ski trails, which these days are used mainly for sledding in winter and mountain biking in summer. I usually start up the north/east side of the loop, which is rather discouraging at the outset as you must climb 0.3 mile up the ski slope, passing by a couple of trophy homes. 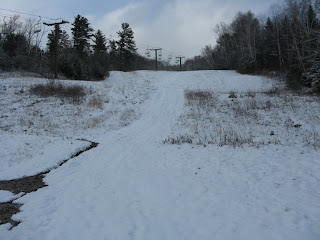 At the top of this climb you get a good view of Mt. Tecumseh. The snow guns were going full blast. Their distant roar could be heard through the day, though it was hardly noticeable after a while. 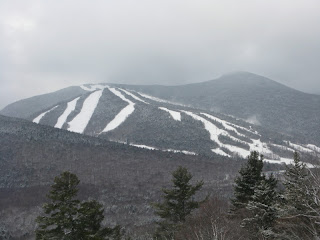 At a trail sign you head into the woods. 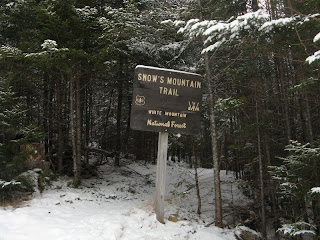 I soon passed this triple-trunked tree. 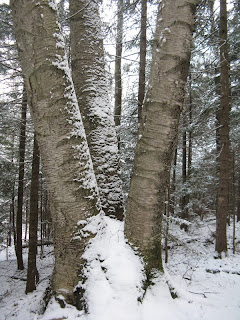 At 0.7 mile the Greeley Ledges Trail splits left - this climbs 0.2 mile to the top of the ski slopes, where there are views of Mt. Osceola and the Mad River valley. 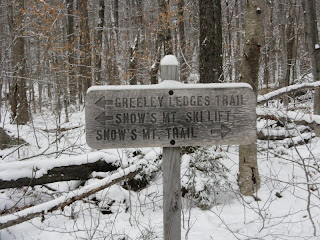 The Snows Mountain Trail leads across the lower slopes of Snows through nice hardwood forest. This section was once part of the old Woodbury Trail, a former (long) route to Mt. Whiteface from Waterville Valley. With 2 to 4 inches of powder, the footing was very slippery today. December hiking ain't much fun until a firm base sets up. 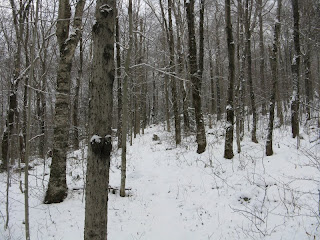 Through the open woods the trail can be hard to follow in places, but it is generally well-blazed by the Waterville Valley Athletic and Improvement Association (WVAIA; www.wvaia.org). 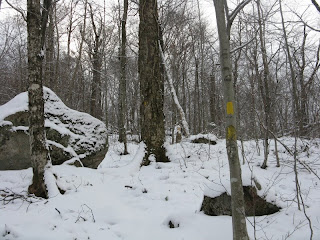 The trail climbs up the side of the ridge, then swings left to generally follow the crest to the SE. 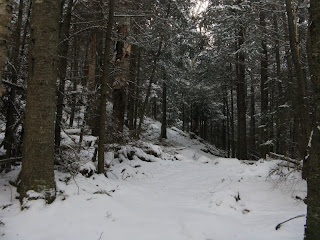 While traversing the ridgecrest, I scrounged through the woods on the north side of the trail, looking for glimpses of the Tripyramids. According to old guidebooks, there were once additional views up here, but they have long since been overgrown. If there were an open view of the Trips, it would be impressive. The best I could do - and this took some time - was find individual peeks at each Tripyramid summit in turn. Scaur Peak... 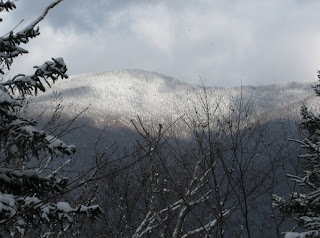 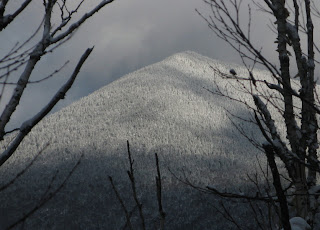 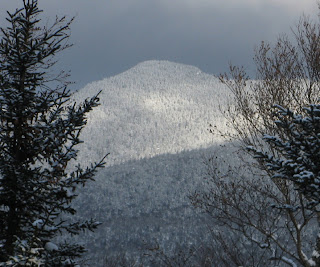 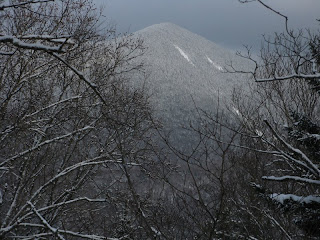 Before the final climb to the top of the loop, the trail passes through this attractive hardwood col. 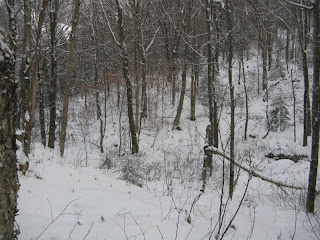 This gets the prize for coolest blaze tree of the day. 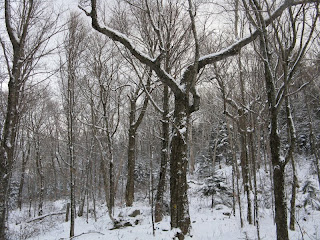 The junction at the top of the loop. Here the south/west link heads back down the mountain, while a 0.1 mile spur continues up the ridge, passing into the Sandwich Range Wilderness, and ends at an outlook ledge. 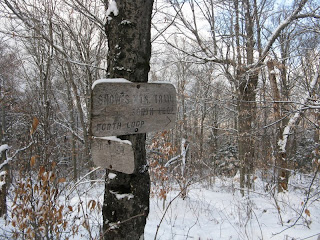 A short scramble is required to access the SW-facing ledge, which has a nice sun exposure. 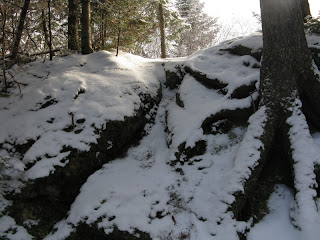 Welch and Dickey Mountains are prominent down the Mad River valley. 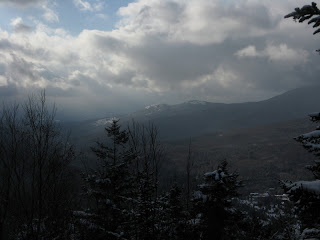 The summit of Sandwich Dome can be seen over the treetops. 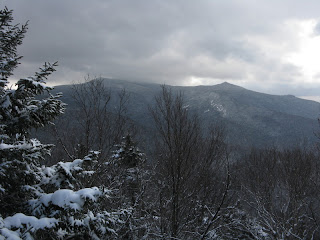 The nubble of Jennings Peak rises above the cliff-faced Noon Peak. 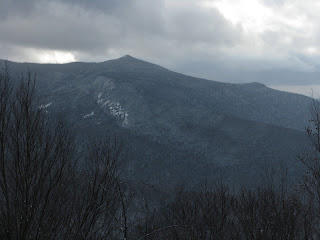 This outlook is at about 2800 ft. The true, heavily wooded summit of Snows is 3060 ft. and is about a mile farther up the ridge. Three Decembers earlier Keith D'Alessandro and I whacked the ridge to the true summit. (Keith has since done all the 3000-footers of NH; Snows is not one of them because it doesn't meet the 200-foot rise rule.) Along the way we found this large old yellow birch. 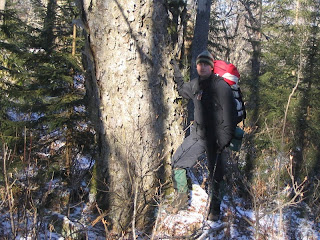 As we descended the east end of the ridge into Lost Pass, that remote, mysterious gap between Snows, the Sleepers and the northern Flat Mountain, we caught this glimpse of East Sleeper. 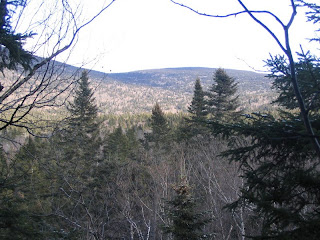 North of the Pass we found this view of South Tripyramid from a beaver meadow at the head of Cascade Brook. We completed that trip by descending through the Cascade Brook valley. 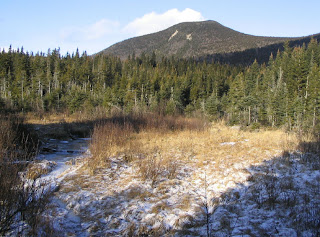 As I returned from the outlook, the sun lit up the spur path. 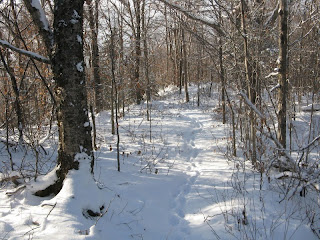 A short, steep drop on the west/south side of the Snows Mountain Trail loop brought me to the lower outlook,which faces down the Mad River valley. 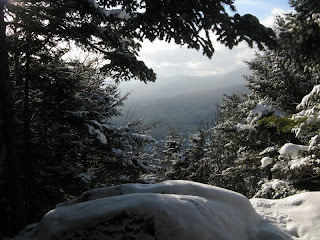 This part of the trail follows an old logging road for a long distance along the flank of the mountain. Because of the slippery footing, I used Stabilicers for the descent. 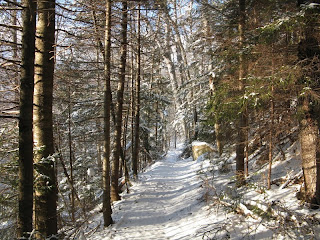 The lower part of the trail leads through expansive hardwood forest. 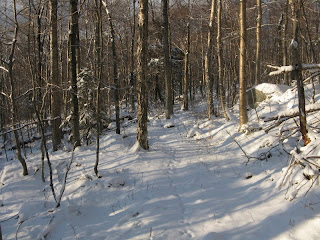 The trail exits onto a private driveway on 76 Snows Mountain Rd. (formerly 46 Greeley Hill Rd.). From there you have a 0.4 mile road and sidewalk stroll back to the parking area. Total for the loop, including the side trip to the outlook, is 4.1 miles with 1300 ft. of elevation gain. If you're comfortable with following a somewhat obscure trail, it's a great snowshoe trip, especially up and back on the north/east side. 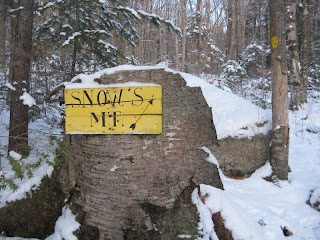