After spending two hours shoveling the season's first significant snow (in Lincoln) the day before, it was time to enjoy the new powder a little bit. For a morning snowshoe I chose a bushwhack to a spruce-surrounded ledge on the lower south ridge of Peak "2675," a spur of East Whaleback that rises to that elevation on the west side of the East Branch at the Lincoln Woods trailhead. I had visited this ledge once in the spring of 1993, and though it had a view limited pretty much to Mt. Hitchcock across the valley, the idea of snowshoeing there had some appeal.

I crossed the bridge over the river and immediately started whacking north up the ridge from the Lincoln Woods Trail through a rocky hardwood forest. Partway up I came across markers indicating a wildlife survey line. 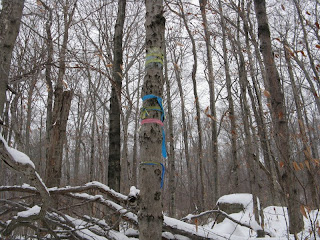 The storm had certainly dumped enough snow for 'shoeing, though I scraped on rocks more than a few times. 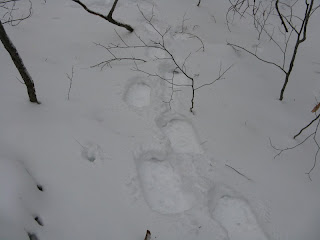 After about a half mile of winding snowshoe bushwhacking, I entered the spruce woods that cover the upper slopes of Peak "2675." In the spring of 1992 I bushwhacked to the summit of this nameless mountain, where there is a ledge with a fine view of Scar Ridge and the Osceolas. But before you plan a visit, I will add that this was one of the most miserable whacks I've done in the region. The upper part consists of endless dense stands of small conifers strewn with wedged-in blowdowns, all in a setting of steep, rough terrain with boulders, holes and other delights. No way was I going to head in that direction today. To get to the lower ledge I was seeking, I knew from previous visits that there were small conifers to contend with, but nothing as bad as is found higher up on the mountain. 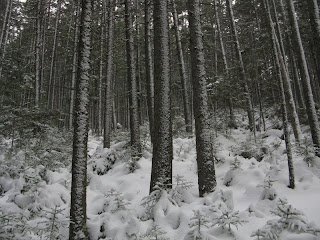 I did have to wallow through some snow-covered sprucelings. After a few of these bouts I was thinking, where is that *&#% ledge? 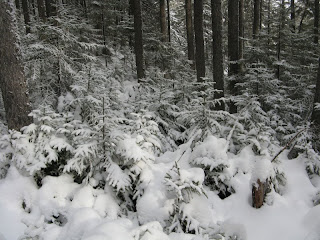 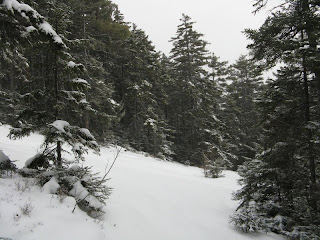 Flurries and fuzzy clouds precluded any real views today. I could just make out the shape of the West Peak of Mt. Hitchcock, with a snowy slide on its face. 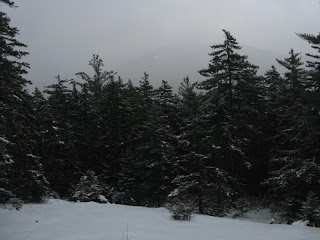 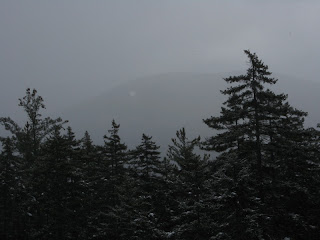 I opted for a more direct, and presumably faster, route for the descent to the trail. This started out with a fun swoop down the snowy ledge. 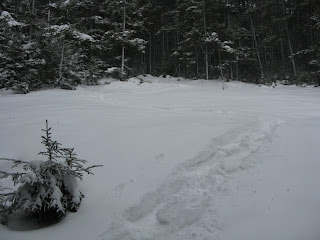 Going this direction I was in spruces most of the way down, but they were generally open between scattered spruce trap thickets. 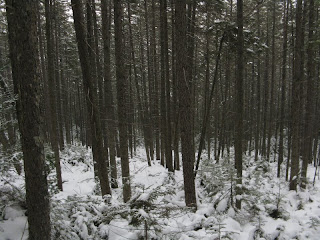 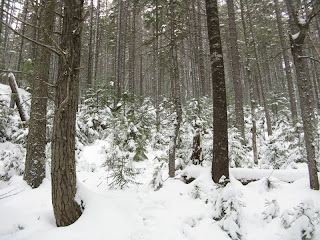 Back down in the hardwoods, the early season 'shoeing was great! 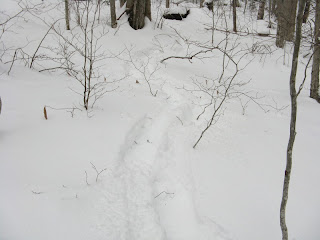 I dropped down onto the Lincoln Woods Trail about a half-mile from the bridge, only 33 minutes from the ledge. 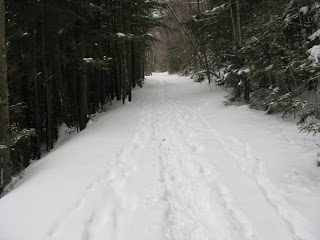 The East Branch is still mostly wide open - need a cold snap to start freezing it up. 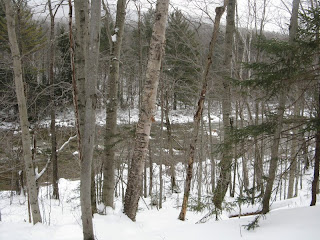 I passed the tracks where I headed into the woods, completing the loop. 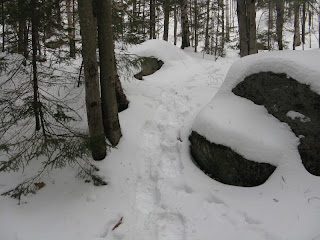 Across the bridge, and head for home and the store after a 2 1/2 hour mini-adventure. 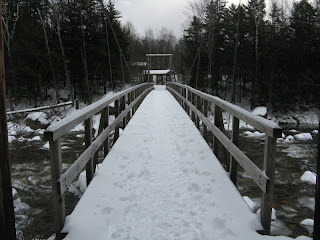