One of the bitterest days we'll see all winter, and it's not even winter yet. It was -5 with strong winds when I arrived at the Highland Center for an 8am meeting. After the meeting, around 11:00, I drove down into Crawford Notch for a planned bushwhack a short way in off the Dry River Trail. But the wind gusts on the floor of the Notch were rather scary - significantly worse than up above the Gateway. Figuring this would be a bad day to be pinned under a fallen limb, I bailed on Dry River and drove back up to the Highland Center.

Once you get out of the fields (perhaps the coldest trailhead in the Whites), the short trails at "Crawford's," the area around the HC, are ideal for snowshoe rambling on a day when you don't want to venture in too far or up too high. A nice variety of scenery can be enjoyed with a minimum of effort. With the temp up to -1, I started off one one of my favorite short hikes in the Whites - the loop around little Ammonoosuc Lake, hidden in the forest behind the Highland Center and long a favorite haunt of guests from the old Crawford House. This trail is admirably maintained by my friend John Compton. 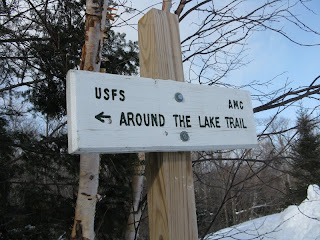 A short way down the trail you pass by the snow stakes where measurements are taken for the "Backcountry Weather and Trail Conditions" report. Just over 12 inches on the ground. 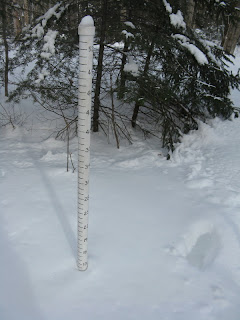 Despite the warm November, the brooks are starting to lock in with snow and ice. 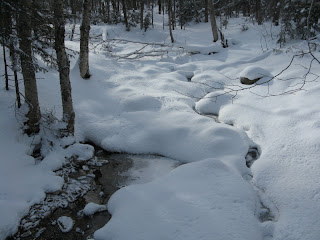 Nearing the lake, the trail passes Merrill Spring, named for one of the managers of the Crawford House. In 1886 a Dartmouth professor analyzed this water and proclaimed it to be "undoubtedly one of the purest waters in the world." Naturally, the hotel highlighted this assertion in its promotional literature. 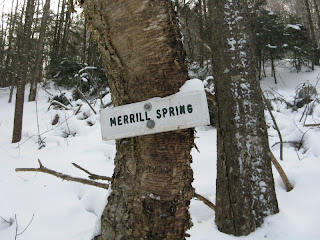 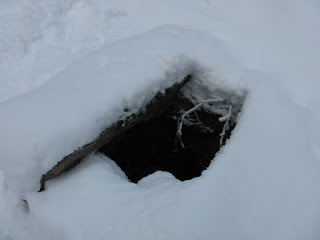 The trail skirts along the west shore of Ammonoosuc Lake. 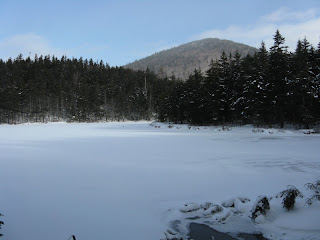 Looking across at the ridges of Mt. Pierce; the upper elevations are immersed in wind fog. 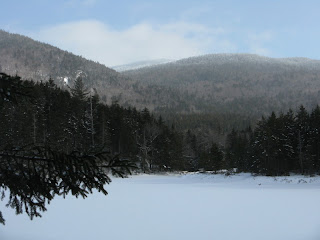 At the north end of the lake I took the spur trail to the viewpoint at Red Bench. Along the way it leads through this nice hardwood glade. 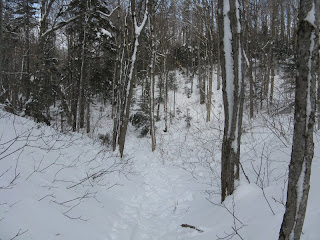 Then it climbs up to cross the snowbound tracks of the Crawford Notch Railroad. 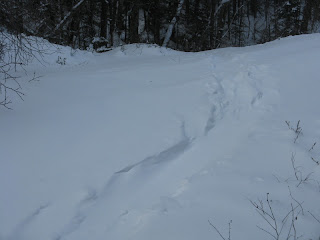 There really is a red bench. 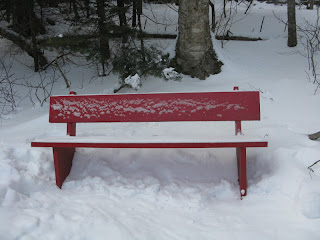 The view has grown in over the years, but you can still see Mts. Washington, Monroe and Eisenhower. 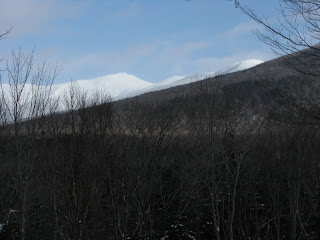 That morning the temp on Washington was something like -18 with gusts to 100 mph. Great day for a traverse. 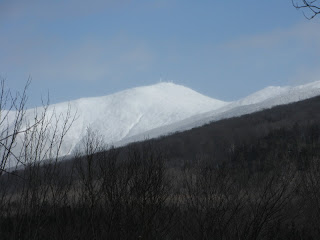 Back on the Around-the-Lake Trail, I took the short "Down to the Lake" spur, where you look south to Mt. Willard (R) and Mt. Webster (L) framing the top of Crawford Notch. 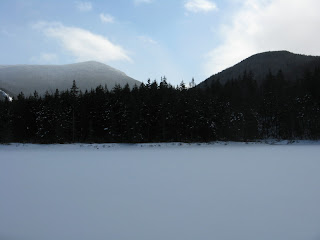 In this view, Webster is on the R, Bugle Cliff is in the center, and you can just see the cone of Mt. Jackson peering over on the L. 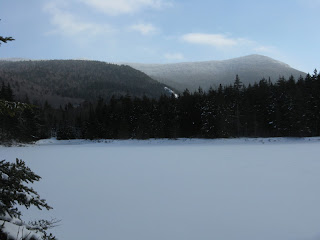 Along the NE shore the trail runs along the base of an esker, a steep-sided little ridge deposited by glacial meltwater. 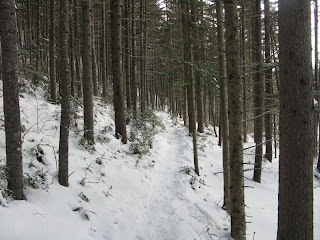 A view back across the pond to the Rosebrook Range, taken from the SE corner near the outlet. There was once a beach house here for use by Crawford House guests. 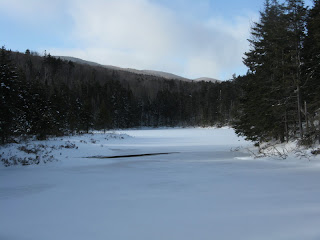 Redliners take note: on the way back, I noticed a sign for a new trail: the "AMC Stewardship Trail," blazed in yellow and leading in a 0.2 mile loop from the S end of the Around-the-Lake Trail to the service road behind the Highland Center. Along the way I saw this tree carved by Crawford Notch legend Ray Evans, who passed away in 2001 at the age of 91. Ray grew up on the tracks in Crawford Notch, where his father was a section foreman, and worked for many years at the Crawford House. He knew the Notch like no one else, and was a well-known and beloved figure to many hikers. I knew Ray and had the privilege of hiking with him several times in the 1980s, when he was in his 70s but could outpace hikers half his age. The story of the Evans family is told in the book, "Life by the Tracks," by Virginia Downs. Though this carving is not exactly LNT, we'll give Ray a pass as this was his lifelong home! One of the objectives of my abandoned Dry River hike for this day was to find a similar carving I had once come across on the ridge north of the Dry River Trail. 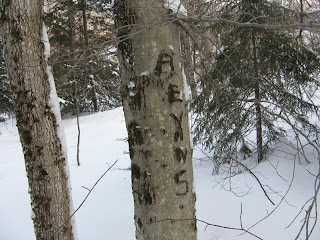 I got to do some trail-breaking on the Stewardship Trail. 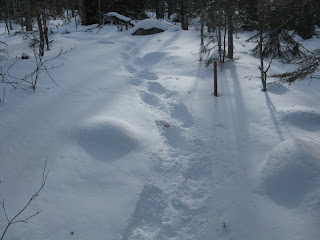 There are numbered interpretive stops along the way. A query at the HC desk revealed that there is an audio tape that can be borrowed to accompany this walk. A little nippy for that today. 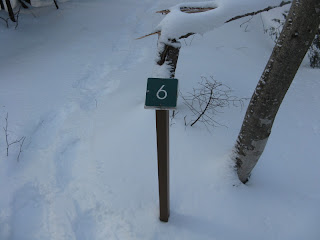 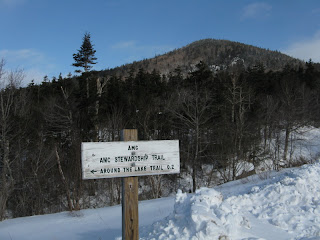 Next I snowshoed across the fields, with their trademark view of Mt. Tom and the headwall of the Crawford Brook valley, where the A-Z Trail climbs to the ridge. 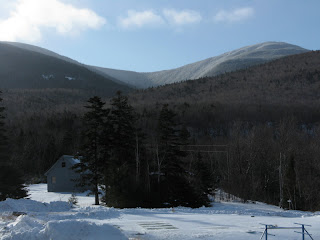 A view of the Highland Center, located where the Crawford House stood from 1852 to 1977. 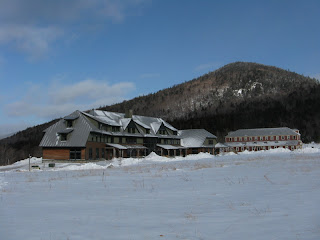 To extend my mini-hike, I headed up the Avalon Trail behind the train depot/information center. 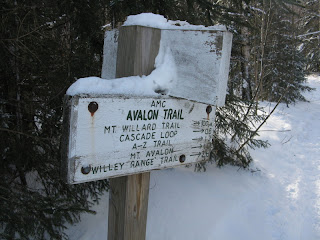 A pretty birch stand beyond the Mt. Willard Trail junction. 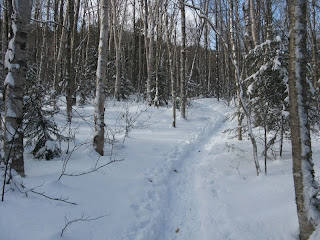 A snow bridge had already formed for the first crossing of Crawford Brook. Snowshoes recommended, you could break through with boots. 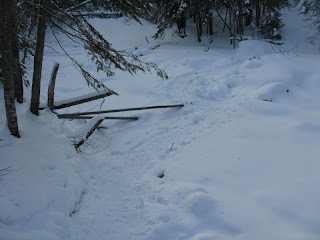 A short distance up I swung left on the Cascade Loop, where I got to do a little more trail-breaking. 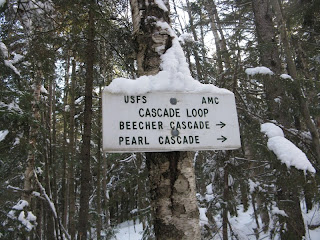 I took the side path down to the base of Beecher Cascade, named for the famous 19th century preacher, Henry Ward Beecher. It was already buried in ice and snow. 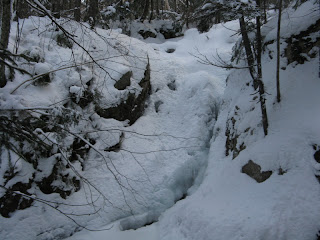 Downstream is a scenic flume-like gorge. 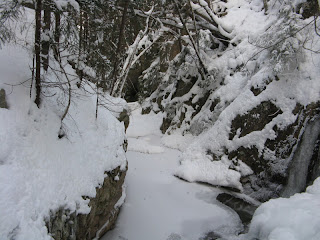 I continued up the loop past the viewpoint for Pearl Cascade, which you really can't see anymore due to fallen trees obstructing the sight line. An easy amble back down the Avalon Trail concluded a nice little three-mile jaunt. By 1:30 the temp had warmed to 3 above.
Posted by Steve Smith at Friday, December 18, 2009