After two years away from the beautiful Wild River Valley, long one of my favorite White Mountain haunts, I was anxious for a visit. John Compton and I agreed to undertake a bushwhack to a ledge on a nameless Wild River ridge that I had visited back in 1996. I knew this spot had a phenomenal view of the Carter-Moriah Range.

Adding much interest to the planned trek was the October publication of a fascinating new history of the Wild River Valley. Written by Maine environmental writer and naturalist Dean Bennett, Nature and Renewal: Wild River Valley & Beyond tells the story of the valley's decimation by logging in the 1890s and fire in 1903, then its reforestation and eventual designation as the newest Wilderness area in the White Mountains in 2006. 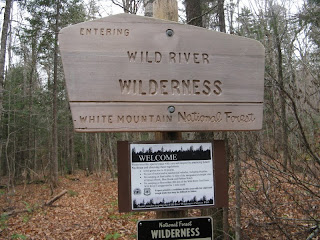 Mentioned in this book are two features of this expansive valley - one natural and one historic - that happened to be near our bushwhack route. The first was a giant hemlock that survived the logging and fire, the second was a remnant piece of logging railroad, complete with rusting rails and rotting ties, that lies mostly forgotten in a brookbed.

We parked at the end of the 5 1/2 mile Wild River Road, a quiet and lonely place in November. No hikers' cars were there; the only people around were two campers in a campground lean-to. We set off on the Basin Trail, and soon undertook what proved to be a futile search for a spur line of the Wild River logging railroad (1890-1903). The abandoned piece of track was reported to be on a spur that extended a short distance into the Blue Brook valley, but we couldn't find a definitive railroad grade in the area we were searching.

We had better luck finding the giant old hemlock, whose survival over several centuries is a central theme in Dean Bennett's Wild River book. It is located off-trail not too far from the Basin Trail. 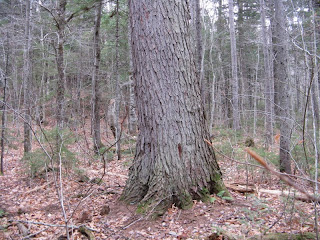 Bennett determined that this tree has a diameter of 3 1/2 feet at breast height, and that it could be as much as 300 years old. It was not discovered until 1999, when a Forest Service forester was inventorying timber in the area. 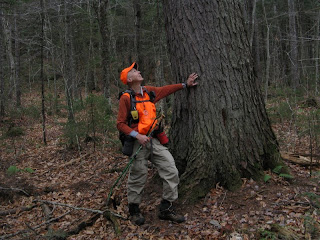 Nearby was another hemlock that was almost as impressive. These ancient trees are now protected within the Wilderness area. 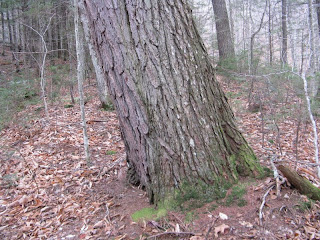 After admiring these forest giants, we set off on the bushwhack to the view ledge. Along the way we found this pretty gorge and cascade on a tributary of Blue Brook. 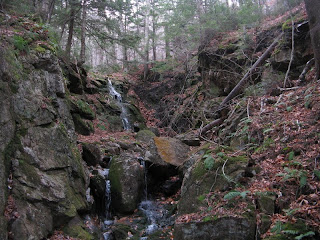 Farther upstream the brook's ledges were lushly carpeted in moss. 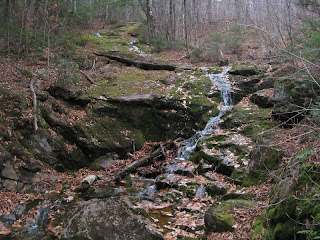 The whack was mostly through hardwood forest, generally good going but with plenty of beech saplings (sons-of-beeches, we call them, when they slap you in the face). 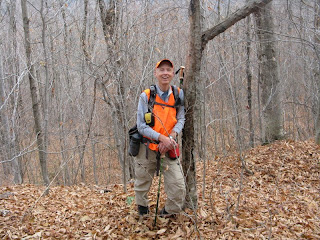 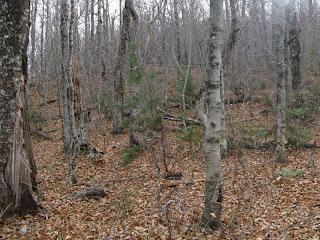 The final approach was steep and thick through spruces. When we got to the ledge, we saw that the day's promised sun was not about to materialize. However, the cloud deck was very high, allowing for fine views of the Carter-Moriah Range to the west across the broad expanse of the Wild River Valley. The whole sweep of the ridge was revealed here - from Carter Dome's Rainbow Ridge on the south end to Howe Peak, east of Shelburne Moriah, on the north end. In this photo all of the high Carters are seen. 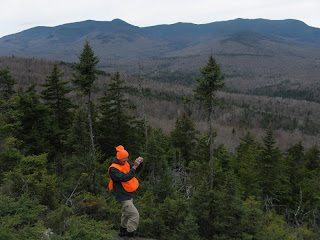 A zoom on Rainbow Ridge, Carter Dome and Mt. Hight, which has a particularly sharp aspect from this angle. 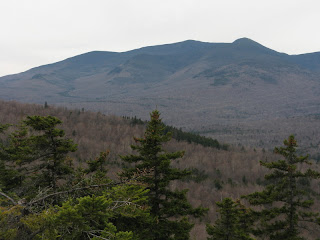 The east side of the Carter Range is wild, remote and rugged country, notable for its l-o-n-g valleys and ridges. This view looks into the trailless four-mile-long valley of Cypress Brook, which has two partly-formed glacial cirques at its head, one on either side of South Carter. 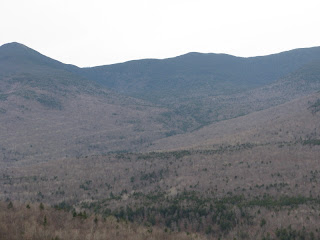 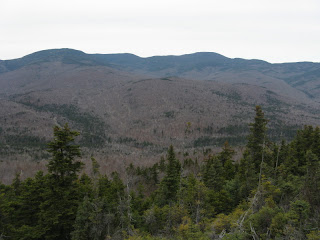 From the ledge you look straight into the valley of Moriah Brook, which is traversed by one of the most attractive trails in the Whites. The stripes of old logging roads, lined with light-colored aspen, are evidence of a selective timber harvest performed in the early 1950s by the Nadeau Co. of Berlin. 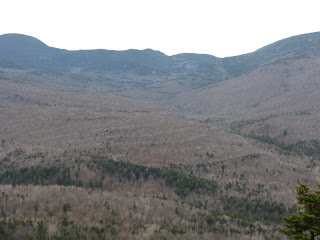 John, bedecked in his best blaze orange, takes a last look at the view after our 1 1/2 hour sojourn. 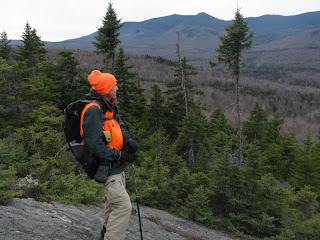 We whacked back down to the Wild River, where shoreside rocks opened a view upstream to Middle Carter. 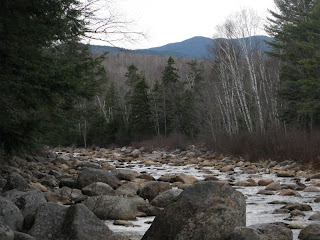 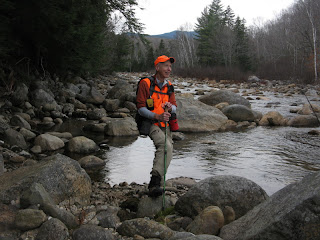 We made a short side trip to check out the suspension footbridge over the river at the start of the Moriah Brook Trail. (This bridge is just outside the Wilderness boundary.) 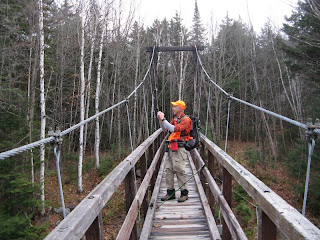 With plenty of daylight left, we headed back into the leafless woods in search of the old railroad track. After some searching, we found it, though not quite where we expected it to be. As noted in the book (a picture of this is on the cover), the section was about 40 feet long and resting in a brookbed. 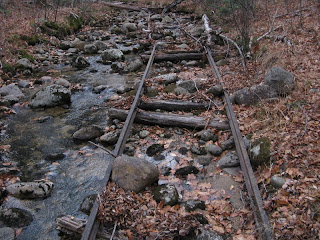 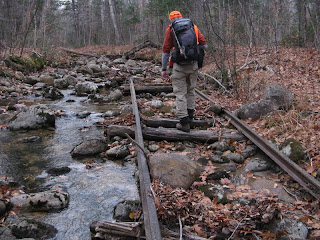 Back at the Wild River Campground, we saw that the Blue Brook Shelter, which had been dismantled and removed from its site up on the Black Angel Trail, has been reassembled down here and will be open for use by car campers at the campground. 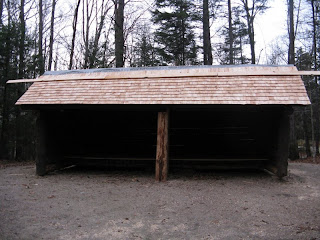 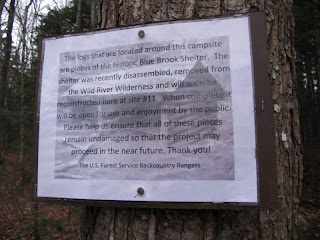 We enjoyed a marvelous and leisurely day exploring one small area of the Wild River Valley. If the snow holds off and the road stays open, perhaps one more trip there will be in the cards for this year.
Posted by Steve Smith at Wednesday, November 11, 2009