Carol sprung me free from the store for a late afternoon hike. Typical of this summer, clouds were lowering and thickening through the day. I drove over to Crawford Notch, hoping the clouds would be high enough to get some views from the first outlook on the Webster Cliff Trail. On a clear day, the traverse along the top of the Webster Cliffs is one of the grandest trips in the mountains. Here's a view of the cliffs from Mt. Willey. 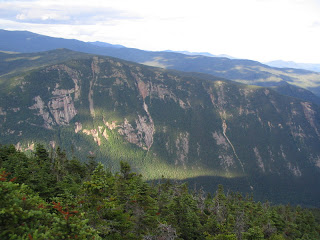 A few peeks of sun as I drove through Bretton Woods gave me hope. Alas, upon entering the Notch the clouds were low on the mountainsides. From the Webster Cliff trailhead on Route 302 I could see that the entire line of Webster Cliffs was in the fog. I briefly considered doing a waterfall hike instead, but in addition to views, I wanted to see the new rockslide that fell across the trail in the spring. So at 3:00 I set off up the trail. 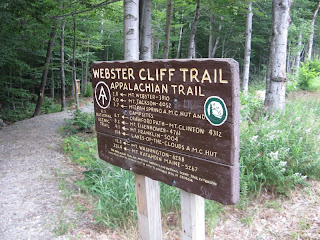 A graded path leads to the new (2008) bridge over the Saco River, built by the AMC trail crew and dedicated to Al and Priscilla Robertson, founders and longtime leaders of the AMC 4000-Footer Club. The project was partly funded by a donation from today's 4000-Footer Club. 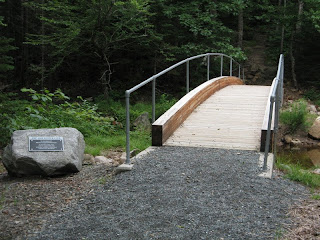 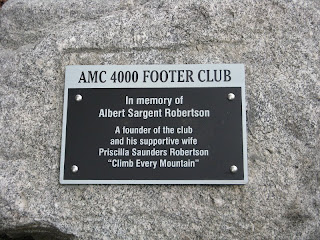 The southern part of the trail is a no-nonsense climb of 1,750 feet in 1.8 miles to the first outlook, starting out in hardwoods and then moving up into steeper terrain where spruces take over. The first mile has pretty good footing, with many rock steps put in over the years by the AMC trail crew. This trail is well cared for by its adopter, "Mad River" on Views from the Top.

The slide is about 1.3 miles up the trail. Though fairly small, it is an impressive scene of local destruction, with big chunks of rock and some toppled and shredded trees. It occurred on May 3 - the 6th anniversary of the Old Man's demise. As reported on VFTT, a descending hiker heard a "loud rumbling" below him and within a few minutes came upon the fresh slide. With some difficulty the hiker traversed it, then posted a sign at the trailhead and reported it to AMC. It was subsequently cleared, rebuilt and stabilized by the AMC trail crew and adopter. 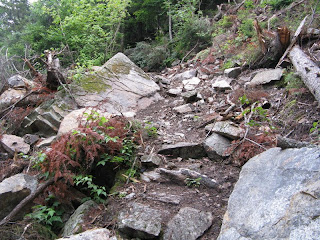 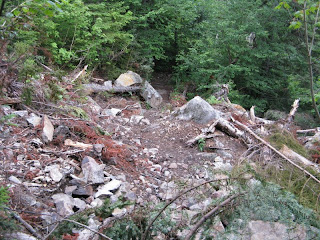 Just above the slide is a nasty scramble up a wet ledge, perhaps the trickiest spot on the trail. 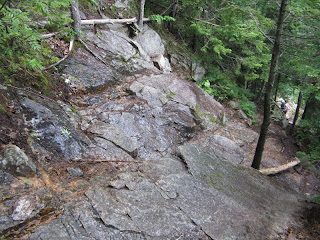 Above here there's a very steep pitch, then a steady grind to the first outlook at about 3000 ft. Reports from two descending hikers I met indicated zero visibility at the outlooks. Sure enough, when I arrived there was nothing but "gray air," to borrow an expression from a view-loving hiking friend. But in a few minutes the mists started to part, revealing the gravelly ledges below and the floor of the notch. 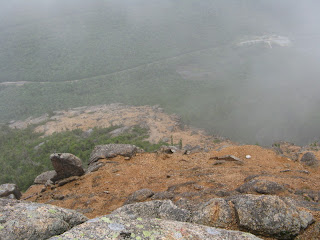 For a second even the upper ridge started to emerge. 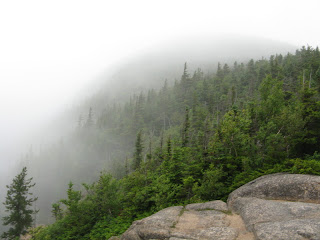 And briefly most of the valley floor was visible. 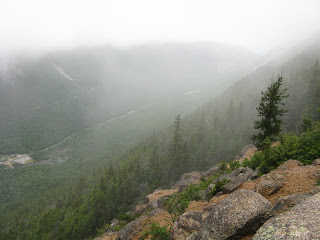 Looking down at the Willey House site. 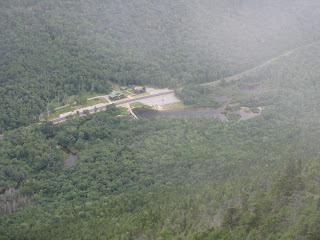 Of interest close at hand, a few yards to the north, was a healthy-looking Jack Pine. This northern tree, which loves ledgy, burned-over areas, is found at only nine known locations in New Hampshire. 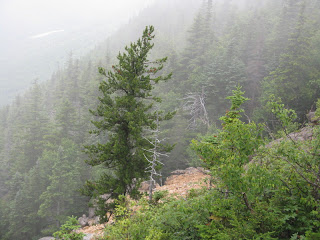 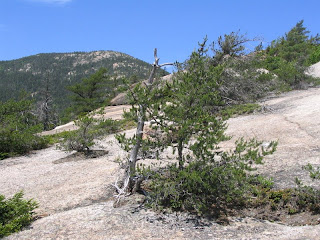 ...and on Welch Mountain near Waterville. 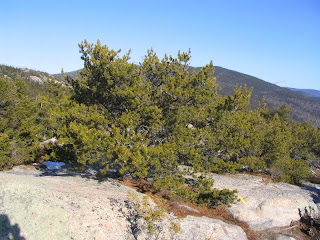 A couple of years ago Keith D'Alessandro and I stumbled upon location #9, a single tree at the edge of a gravel patch near the true summit of Mt. Resolution. 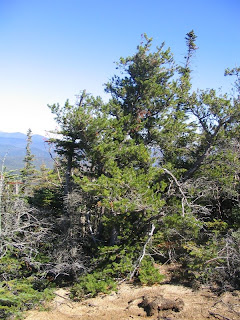 Another interesting and much more common plant on the Webster Cliff ledge was three-toothed cinquefoil, blooming in a crack. 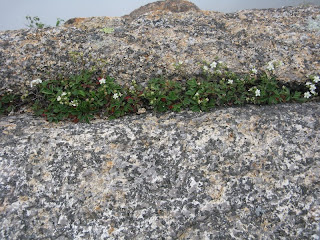 The clouds soon closed back in. I felt fortunate to have gotten even these limited vistas. On the way down, a short bushwhack netted me another view, this one looking south down the Notch. 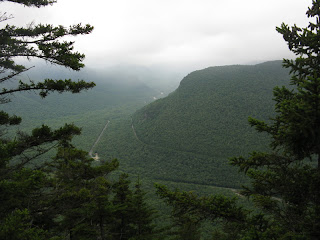 To the southwest, Ripley Falls could be seen as a small white rift in the forest. 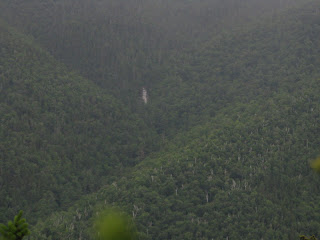 Farther down there was a neat boulder, split four ways, on the downhill side of the trail. 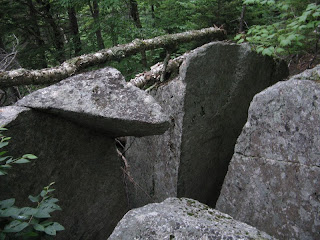 I was curious about Webster Brook, which drains a hidden valley between Mt. Webster and a southeastern spur, so once back down in the hardwood zone I whacked down a steep slope to the brook and followed it down to the Saco River Trail. There were a few minor cascades and pools. 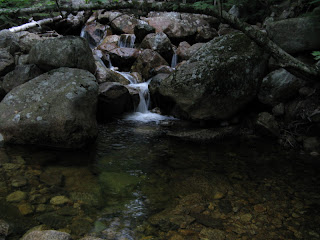 What struck me about Webster Brook was that its large rocky bed was all out of proportion to the meager water flow. A lot of heavy scouring was evident. It must be a fast riser after heavy rain. Once down to the Saco River Trail, I followed that fine woodsy route back to the Webster Cliff Trail. This trail, opened just a few years ago by park manager John Dickerman (Mike's brother) and friends, is one of the unsung treasures of Crawford Notch. Before returning to my car, I continued north for 0.2 mile on the Saco River Trail from its lower junction with the Webster Cliff Trail. This section descends to a beaver pond along the Saco River. On a clear evening there would be a view of looming Mt. Willey. Not tonight, though. But even in the gloom of a misty dusk, it was a pretty spot. This can also be accessed by an easy mile's walk from the Willey House site via the Sam Willey Trail and Saco River Trail - something even non-hiking relatives and friends could enjoy. 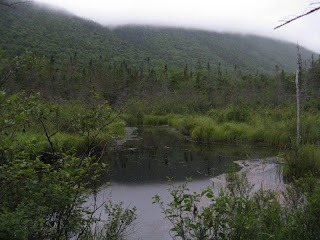