Sometimes ya gotta get your hikes in when you can. On this Sunday, this meant starting a little before 7:00 in the evening. Decided to go up the Indian Head Trail, the lesser-used and, to this hiker, more attractive route up Mt. Pemigewasset. Figured I would turn around about 8:00 unless I was close to the summit. In any case, I had several headlamps in my pack.

I headed out at a brisk pace under cloudy skies. After crossing a field and going through two underpasses below I-93, the Indian Head Trail makes a moderate climb up through a vast hardwood forest, running alongside Hanson Brook for a ways. Saturday night's heavy rain had this pretty little cascade in heavy flow. Tough to shoot pictures in the darkening woods. The trail also passes by some interesting boulders. 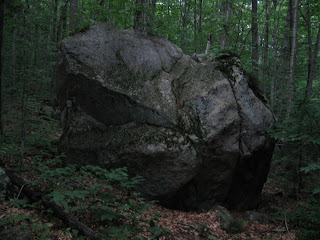 The middle section of the trail is fairly steep in places, with some badly eroded sections and plenty o' mud. On the bright side, the work of a trail adopter was evident - some new rock waterbars and rock steps, and some false paths brushed in. I like this trail for its sense of remoteness as you swing around under the big Indian Head cliffs (visible only when the leaves are down). To the west and SW is a large trailless area.

After the last steep climb through conifers and birch, I reached the junction with the more popular Mt. Pemigewasset Trail from the Flume parking lot. 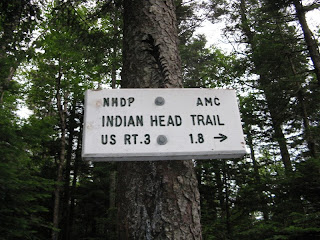 Within a couple of minutes I emerged on the great granite cliff at the summit. I'd made it up in just under an hour, 10 minutes before my turnaround time. 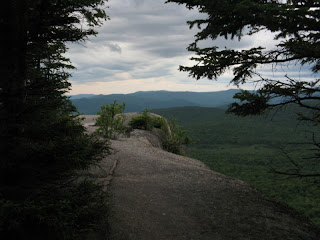 Before sitting down for a break, I walked over to the eastern ledge. On the way across you get a good look at Scar Ridge (R) and Osceola (L). 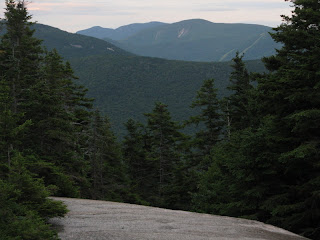 The view of Lafayette and Lincoln is now mostly obscured in summer. 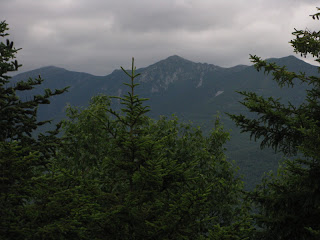 There's still a good look at Liberty and Flume... 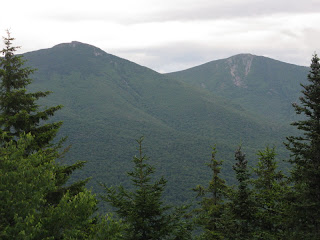 ...and into the beautiful bowl of Flume Brook. 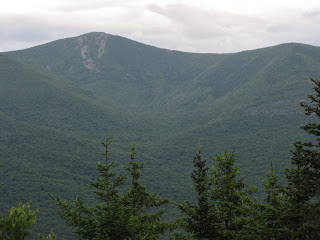 The south view down the Pemigewasset River valley from the main ledge is pretty civilized, what with the windings of I-93, the Route 3 strip in North Lincoln, and the buildings of North Woodstock and Lincoln. 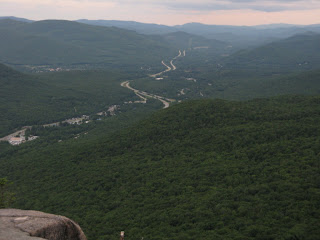 The view is more backcountry when you look to the southwest. The large swamp on Harvard Brook known as Bog Eddy is prominent on the hardwood plateau to the SSW. 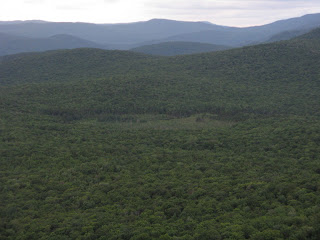 From the snowmobile trail along the edge of Bog Eddy, you get a corresponding view back to Mt. Pemi. 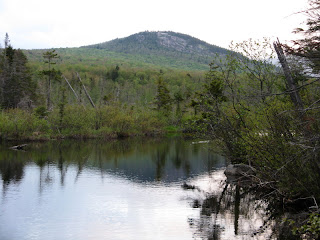 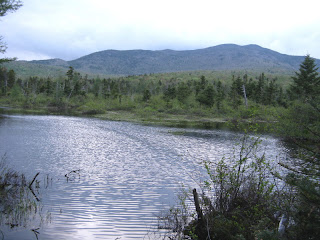 Back on Mt. Pemi, looking at the long, rippling crest of Mt. Wolf, one of the wild ones. 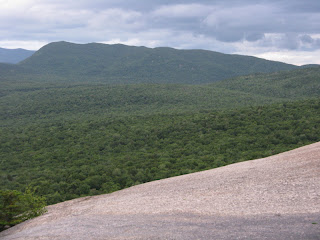 I've always been intrigued by the long south ridge of South Kinsman. 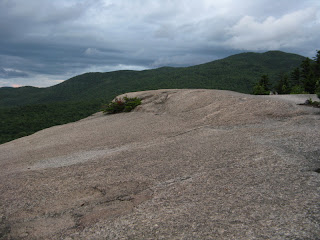 In spring 2008 I whacked from the Indian Head Trail at ca. 2200 ft. across low, rolling ridges to the lower end of that south ridge. From some scrubby ledges I got an interesting view of Mt. Wolf beyond Bog Pond. I've always felt that were it not for the powerline, which was built in the 1950s, this Bog Pond plateau between Wolf and South Kinsman would be one of the wildest corners of the Whites. Even so, it's still pretty neat. 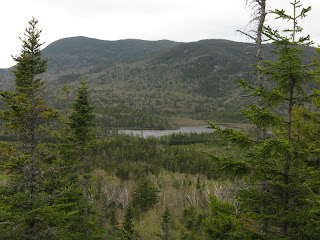 Looking back at Mt. Pemi from one of those ledges on last year's trip. 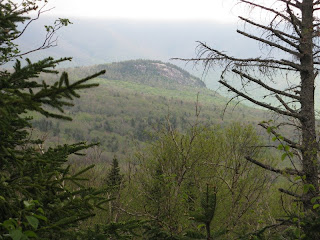 At 8:15, after one last look peering down at the treetops, it was time to leave the summit of Mt. Pemi and make haste back down the trail. Didn't put the headlamp on til 2/3 of the way down, back to the car at 9:20. 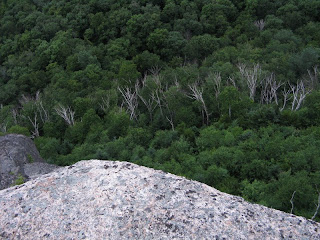