Missed out hiking on the only two partly sunny days we've had in a while, and rain was forecast to return by the afternoon on this Tuesday. The Greeley Ponds seemed an ideal choice for a nearby shorter hike with an early start. These picturesque ponds tucked into Mad River Notch are a perennial favorite of mine, and of many another hiker.

There were no other cars in the small parking area off the Kanc Highway when I pulled in at 7:30 am. Skies were cloudy with low fog draped over the mountains. 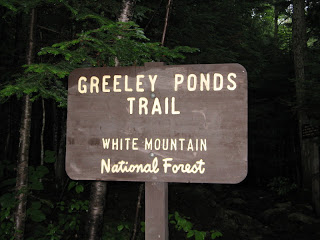 The stats say the hike to Greeley Ponds from the Kanc should be a breeze: only 400 feet of elevation gain over a mile and a half. But the Greeley Ponds Trail is no nature walk - it's rocky, rooty and, in a wet season such as we've been experiencing, brimming with mud, especially in its first mile. After a few minutes of slogging through muckholes I questioned whether it was worth continuing, especially if the ponds would be immersed in fog. 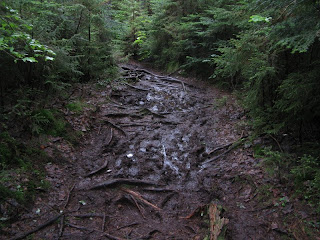 But I mushed on, and soon came to the crossing of the North Fork of Hancock Branch. It was in good flow, but the step stone crossing wasn't difficult. 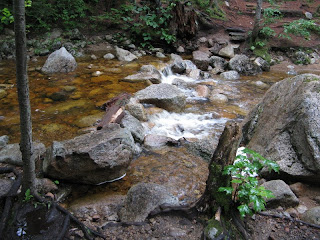 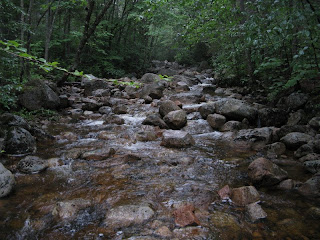 As the trail twists along the east side of a shallow ravine, there are numerous slippery bog bridges to traverse. 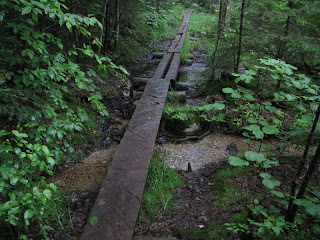 At 0.9 mile the trail turns left onto an old logging road with a mostly gravelly base, and the footing improves. 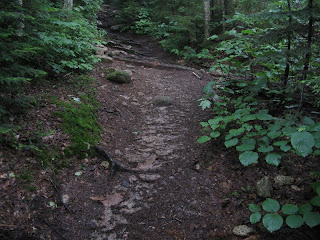 An easy climb lifts you to the 2300-ft. height-of-land in Mad River Notch, and the boundary of the Greeley Ponds Scenic Area. 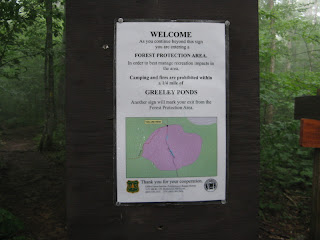 Here's where peakbaggers take off for the wicked steep climb up East Osceiola. That wouldn't have been fun today... 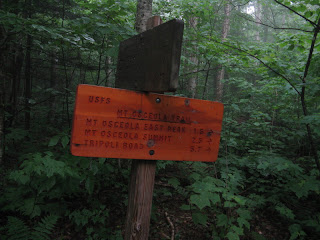 It was a mite foggy in the Notch. 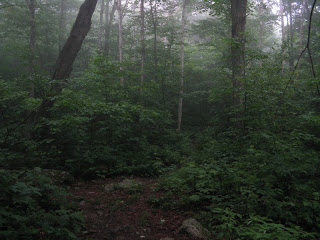 The floor of the Notch bears some fine mature hardwood forest. 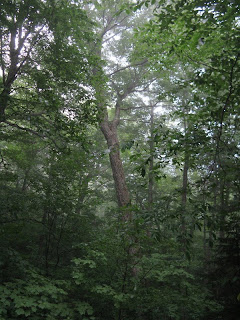 As you descend towards the ponds there's a neat fortress rock beside the trail. 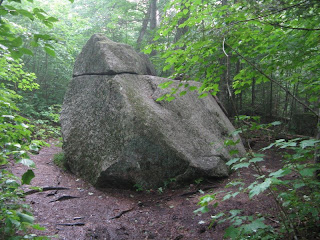 Where the X-C ski trail splits off above the Upper Pond, you cross over the infant Mad River. 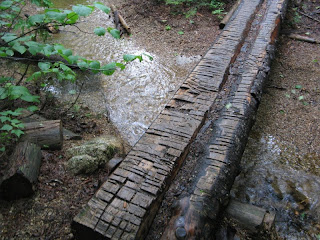 The fog dissipated as I descended to Upper Pond. I dropped down a side path to a partly submerged gravel beach on the NW shore, for a first look at the pond. 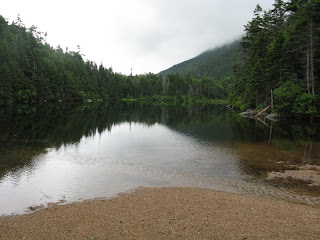 The main trail hugs a bank above the pond. Someone (illegally?) hacked out some trees to open up a view across the water to the little beach and grassy clearing on the SE shore. 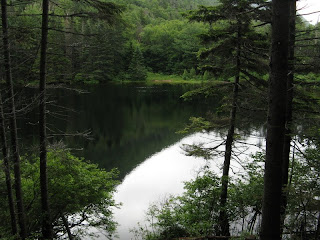 From the SW corner I followed an overgrown path across the outlet and along the south shore to that SE beach/clearing. Behind here was the old Greeley Ponds Shelter. It was too easy to get to and the area was getting hammered by abusive camping practices. In the late 1960s the Forest Service designated the Scenic Area and removed the shelter. Camping is prohibited in the Scenic Area. But this spot is a favorite of day hikers, for its view across the pond to the imposing cliff face on the NE arm of East Osceola. In some years peregrine falcons nest amidst these crags. 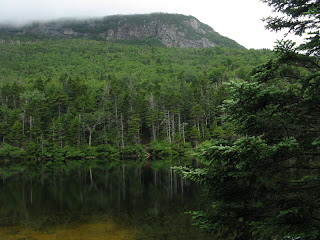 The view looking north up the pond. On a clear day you can see cliffs on the west knob of Mt. Huntington in the distance. 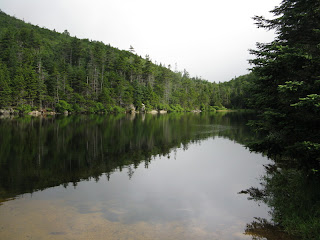 The trail between the Upper and Lower Ponds descends gradually through some nice hardwood forest. This is just two miles from the road, but the feeling is remote. 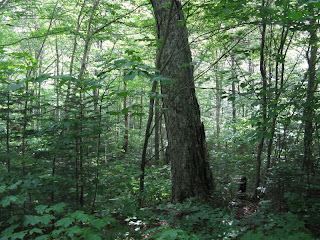 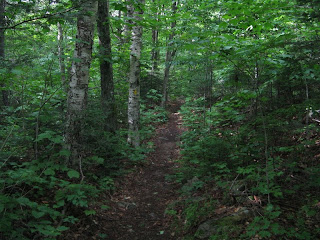 My favorite spot at the Greeleys is the gravelly beach at the NW corner of Lower Pond. This pond is wider and more open to the sky than its smaller, deeper neighbor. To the south you see a SW knob of Mt. Kancamagus, wreathed in cloud today. 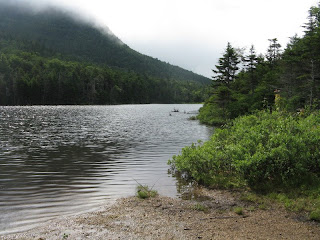 Looming over both ponds on the east side is the steep flank of Mt. Kancamagus's west knob. On old Waterville Valley trail maps the slabs up there were called the K1 cliff. The K2 cliff was on the SW knob. 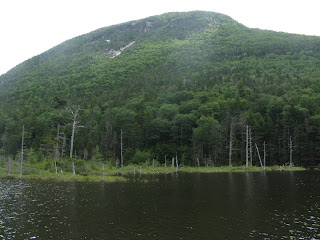 I sat on on my pack for a spell on this wet little beach. The sun made a rare appearance through a rift in the clouds. A soft south breeze was nudging the water. There were no other hikers around, and the place was teeming with bird life. Four or five white-throated sparrows were dueling it out with their haunting whistles. A woodpecker was drumming in the woods behind the shore. Tree Swallows were flitting and twittering (in the original meaning of that term). Periodically bursting into song were a purple finch, magnolia and yellow-rumped warblers, a redstart, a winter wren, and a swamp sparrow. Several times I spotted a mink swimming around off the west shore, only his little brown head poking above the surface.

Eventually I moved on, following the trail behind the west shore down to the SW corner for a look at Lower Pond from a different perspective. 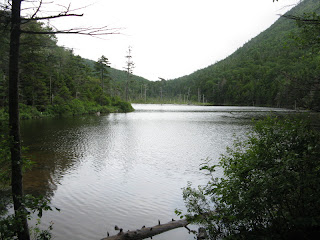 I decided to take the full tour and continue another 0.3 mile south on the trail, cross the Mad River, and follow an X-C trail back to the great viewpoint at the SE corner. It's amazing how quickly the Mad River becomes a full-fledged mountain stream as it tumbles southward from Lower Pond. 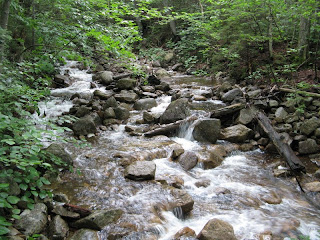 The trail crossing was slightly tricky, but doable. 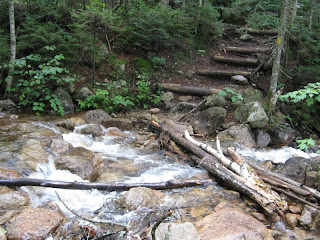 A sign points the way for northbound hikers coming from Waterville. 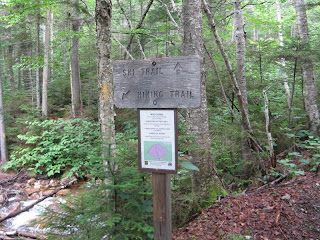 The view from the SE corner is perhaps the best at the ponds. I've been to the Greeleys many times, in all seasons, but the thrill is still there. They compare favorably to any of the stunning ponds I've seen in the Adirondacks and Baxter State Park. 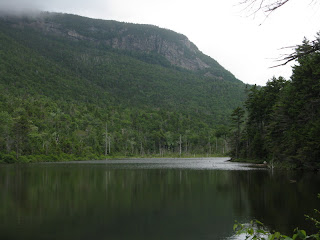 The water level was higher than normal here, but there was a comfy (if damp) log seat. 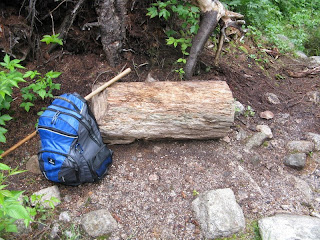 On the way back I paid another visit to that favorite beach on the NW side of Lower Pond. 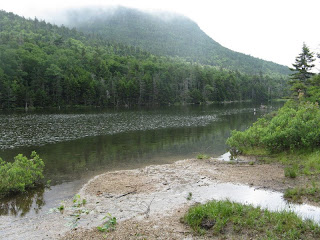 As I departed from here, I met the first hikers of the day -- after I'd been out for three hours.
Early start = solitude. Back by the Upper Pond, I stopped to take a look at the old route of the Mount Osceola Trail, which went straight up from the floor of the notch. 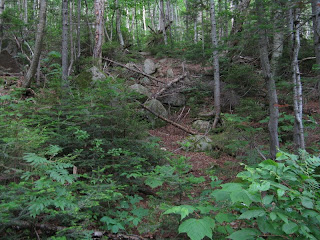 At the height-of-land I ran into a large group of Tuesday walkers from Campton, heading into the ponds. When I returned to the parking area, there were nine cars there besides my own, and two more pulled in as I was leaving. The Greeley Ponds are ever-popular, and with good reason. 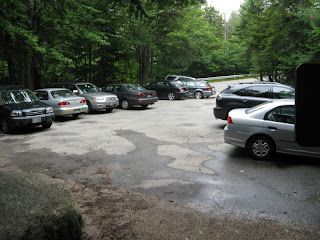