On this morning I decided to head out to Hancock country, where snow depth maps showed a foot or more on the ground. If trail conditions looked good, I thought I might bushwhack to a small slide west of the Arrow Slide, or climb North Hancock via the trail. I was pleased to find that the Hancock Notch Trail was a solidly packed snow sidewalk. This condition continued all the way to the loop junction on Hancock Loop Trail, except for several open brook crossings and a bunch of assorted open rocky drainages, which deterred me from putting my snowshoes on. Better to beat up on the Micropsikes, and I wasn't even denting the trail. 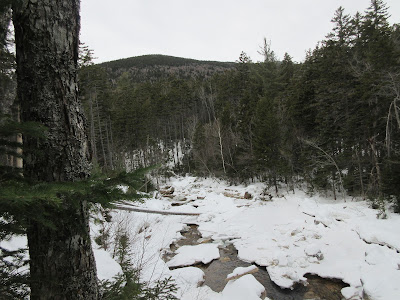 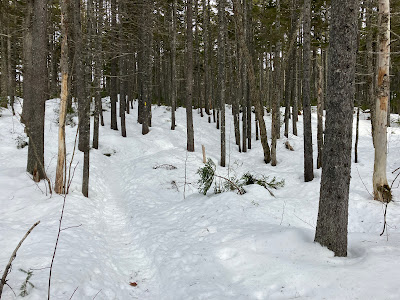 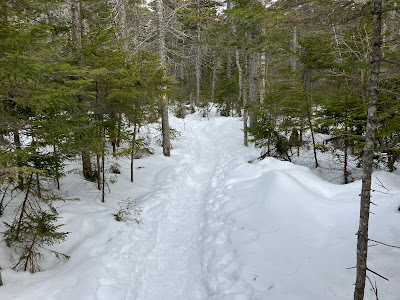 Unlike some areas in the western and northern Whites, there was plenty of snow here. 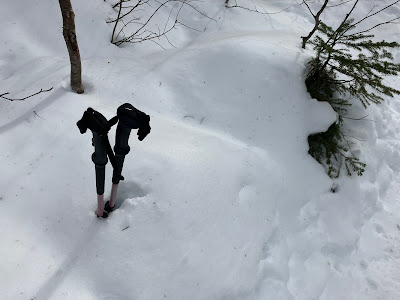 The North Fork crossings were open and rock hoppable. 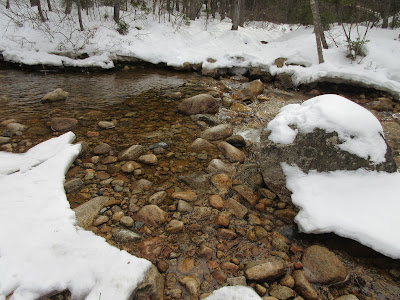 These signs have been moved since my last visit here. 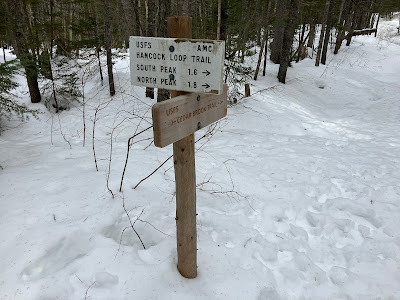 Imposing view of the Arrow Slide as the North Link of Hancock Loop Trail drops down to a flat spot before commencing the long, steep climb up North Hancock. Plenty of ice bulges up there. The Arrow Slide was used as the ascent route by two AMC groups - the first led by noted winter trip leader Robert L. Collin and the second including the renowned mountaineers Robert and Miriam Underhill - for the first known winter circuit of the Hancock peaks on March 6, 1960. “There were ice cliffs in the middle of the slide,” wrote Nancy L. Collin in Appalachia. “In places the snow-cover over base rock and ice was thin and the footing tricky. A few ice steps had to be cut and many steps were whacked through the crusty snow.” 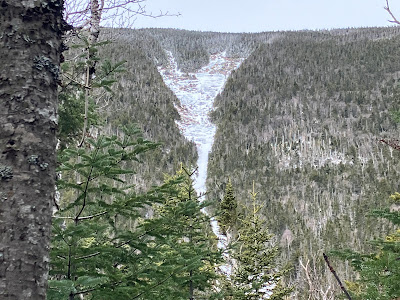 The flat spot at the bottom of the pitch. After testing the snow off-trail, I decided against bushwhacking to the "Baby Arrow" slide. The snow was soft and wet with a promise of numerous blowdowns and spruce traps. 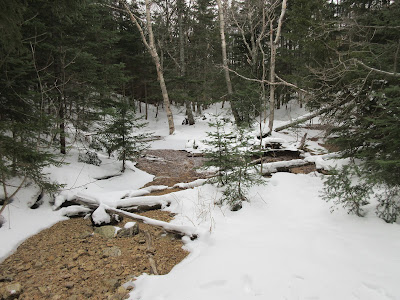 I switched out 'spikes for my MSR Evo Ascent snowshoes for the start of the steep climb to North Hancock, figuring to take advantage of their superb traction and televators. But as the grade steepened the track became crusty and choppy, quite awkward for snowshoes. As I was pondering a switch out to Hillsounds, up the trail came Cartsen Turner, who blogs as the "Protean Wanderer," making quick work of the climb with his Kahtoola K-10s. We had a good chat, then he continued up on his January grid climb for the Hancocks and I donned my recently purchased Hillsound Trail Crampons. 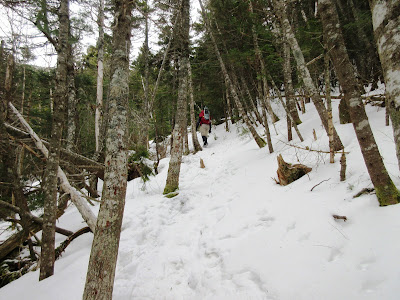 Rising 1100 ft. in 0.6 mile, this is one of the more relentless steep climbs in the Whites. 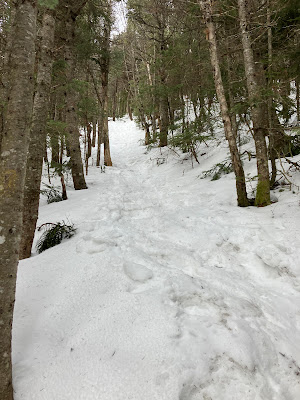 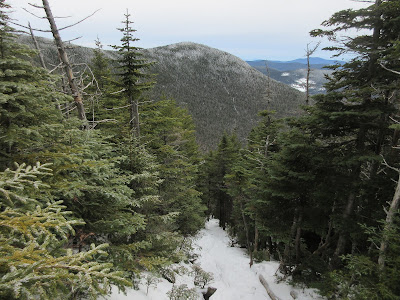 Near the top the grade eases and the trail passes through a fir wave. 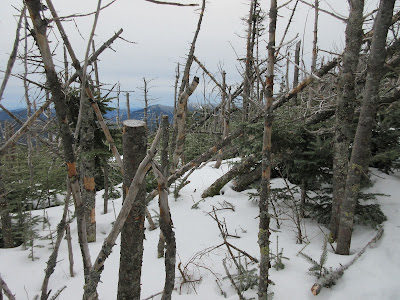 A snow platform improves the views from the fir wave. 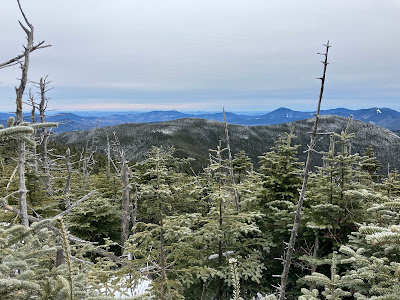 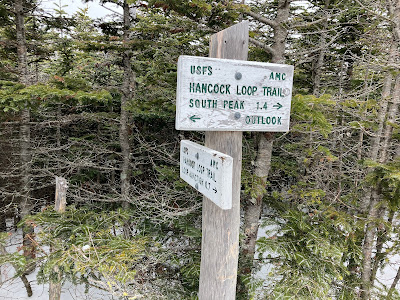 From the North Hancock outlook: Winter days with a high gray cloud deck provide some of the best views of the stark, darkly wooded peaks and ridges rolling to the horizon. On a sunny day this south-facing vista would be shadowed and backlit. 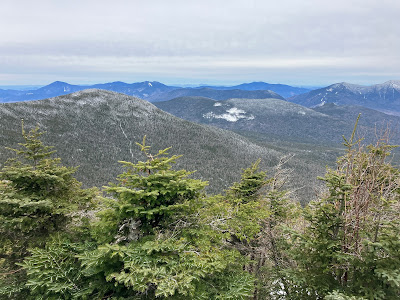 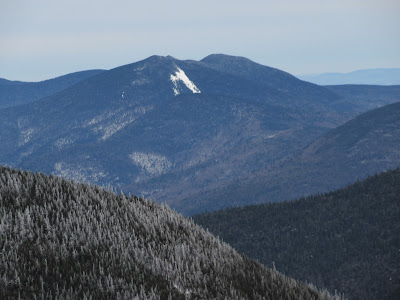 Perhaps the finest Hancock vista: the Osceolas with their many slides beyond the broad valley of the North Fork. The temperature was near 30 up here and there was zero wind, allowing me to spend a comfortable 45 minutes savoring the views, which extended as far as Stratton Mountain in southern Vermont. 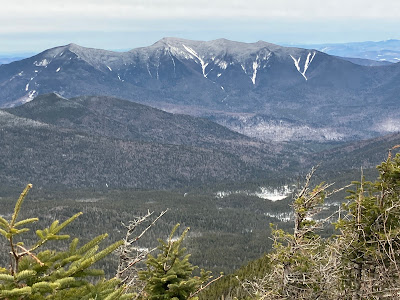 Parting shot of the outlook. The descent on the steep, crusty trail to the loop junction was slow and careful, with the Hillsounds proving their worth. From there it was an easy 'spike cruise out to the hairpin. 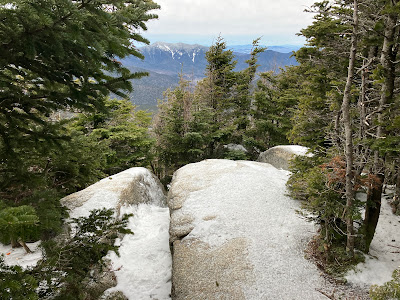